Good morning on September 10, 2020: National Hot Dog Day. If you haven’t had one lately, the wurst is yet to come. It’s also TV Dinner Day, International Makeup Day, and World Suicide Prevention Day. Here are the suicide rates across the globe for males (top) and females (bottom), along with a key (suicides per 100,000 people). Note the sex difference in rates—the patriarchy is no picnic!

News of the day: Jessica Krug, the George Washington University professor who posed as Afro-Latina her entire academic career, has resigned her position. I still don’t have a take on this because, after all, although she was duplicitous, she also contributed through her teaching and her books, towards racial equality.

Am I getting the wrong impression, or has the New York Times’s science section gone seriously downhill. Carl Zimmer, always willing to dig a little deeper, doesn’t seem to write much there any more, and most of the posts are gee-whiz posts in the “Trilobites” column.

Norm sent in this video of a mini-Trump lipsynching to some Trump mimic; it’s The Preschool Apprentice.

According to CNN, Bob Woodward’s new book Rage contains a description of Trump’s knowledge about the coronavirus early on. It doesn’t paint a pretty picture of the President, but what does. However, you’d think he remembered that he said stuff like this before he started downplaying the thread of the virus. Remember when he said that it would likely disappear over the summer? From CNN:

President Donald Trump admitted he knew weeks before the first confirmed US coronavirus death that the virus was dangerous, airborne, highly contagious and “more deadly than even your strenuous flus,” and that he repeatedly played it down publicly, according to legendary journalist Bob Woodward in his new book “Rage.”

“This is deadly stuff,” Trump told Woodward on February 7.
In a series of interviews with Woodward, Trump revealed that he had a surprising level of detail about the threat of the virus earlier than previously known. “Pretty amazing,” Trump told Woodward, adding that the coronavirus was maybe five times “more deadly” than the flu.

Trump’s admissions are in stark contrast to his frequent public comments at the time insisting that the virus was “going to disappear” and “all work out fine.”

On the other hand, when I watched the news on Wednesday night, I saw Anthony Fauci refusing to criticize Trump for his downplaying of the threat, saying that all health care doyens were pretty much downplaying the threat! I don’t buy it, especially in light of Trump’s subsequent statement, which contradicted those of the doyens.

Stuff that happened on September 10 includes: 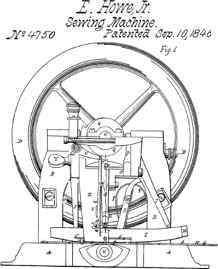 Sadly, Bikilia died at 41, four years after he was in a horrific car accident. But here’s his great barefoot victory (he was from Ethiopia). He won again four years later, but this time wore shoes.

Here’s a video of the crash, but don’t watch it if you’re sensitive:

Correns was one of three people who rediscovered Gregor Mendel’s principles of heredity, publishing his paper (along with the other two) in 1900. Correns also discovered cytoplasmic inheritance.  Here’s the Herr Professor: 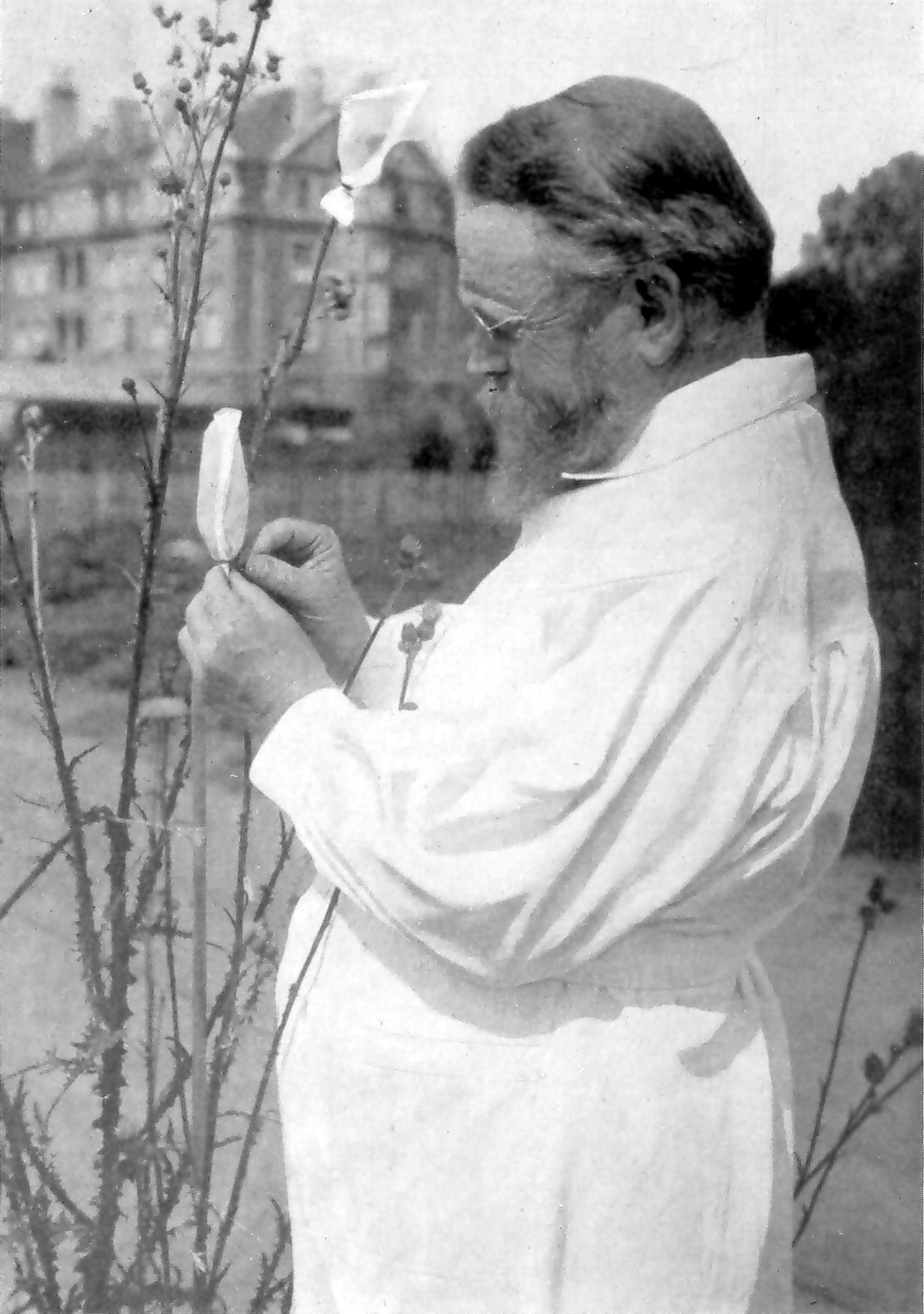 the Wayback Machine has saved some photos and reminiscences of Gould by Jill Krementz. Here’s a photo of Gould taken on November 4, 1983, when he was battling mesothelioma, a cancer that’s nearly always fatal. If you knew Gould, you can see how extraordinarily thin he is here, certainly because of his treatments. Amazingly, Gould survived the cancer and lived another twenty years, dying of an unrelated cancer in 2002. 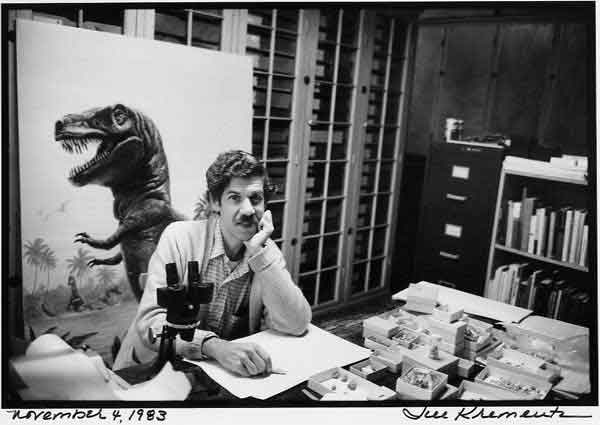 Here’s a short segment of Copeland in Swan Lake:

Those who went to glory on September 10 include:

Here’s a short video of Father Divine and his flock (his given name is, as with many aspects of his early life, unknown):

Meanwhile in Dobrzyn, Hili is, as Christopher Smart wrote, “rolling upon prank”:

A: What are you doing?
Hili: I’m trying to get more comfortable. 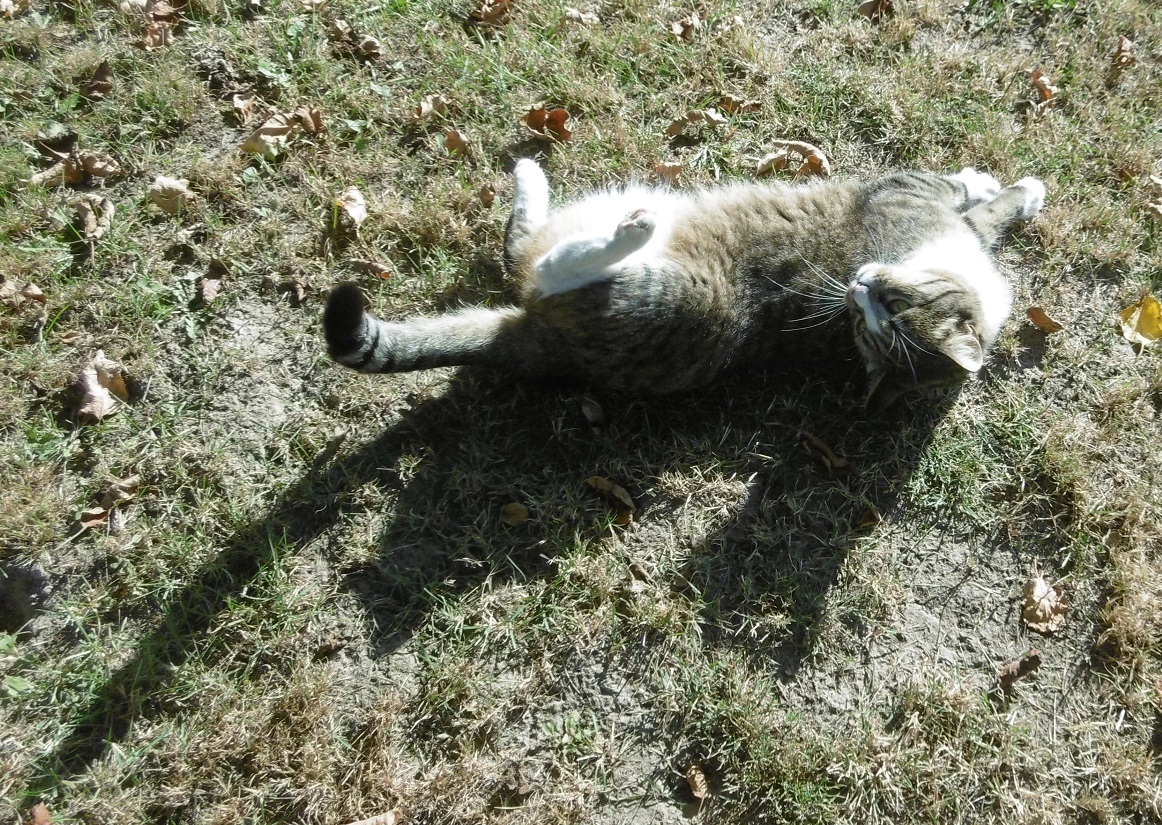 Some pictures of the BFFs Szaron and Kulka, one with Szaron grooming the kitten: 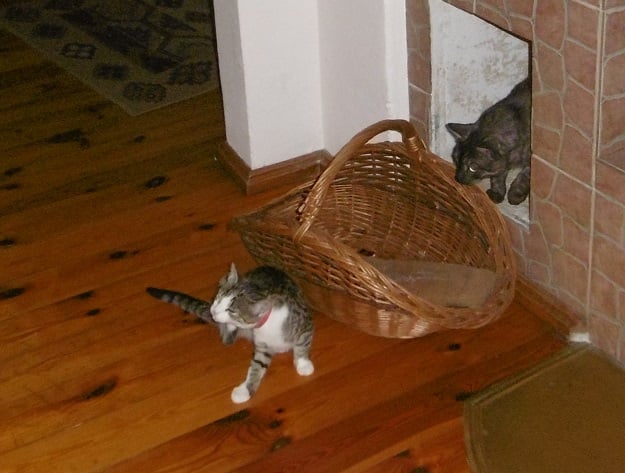 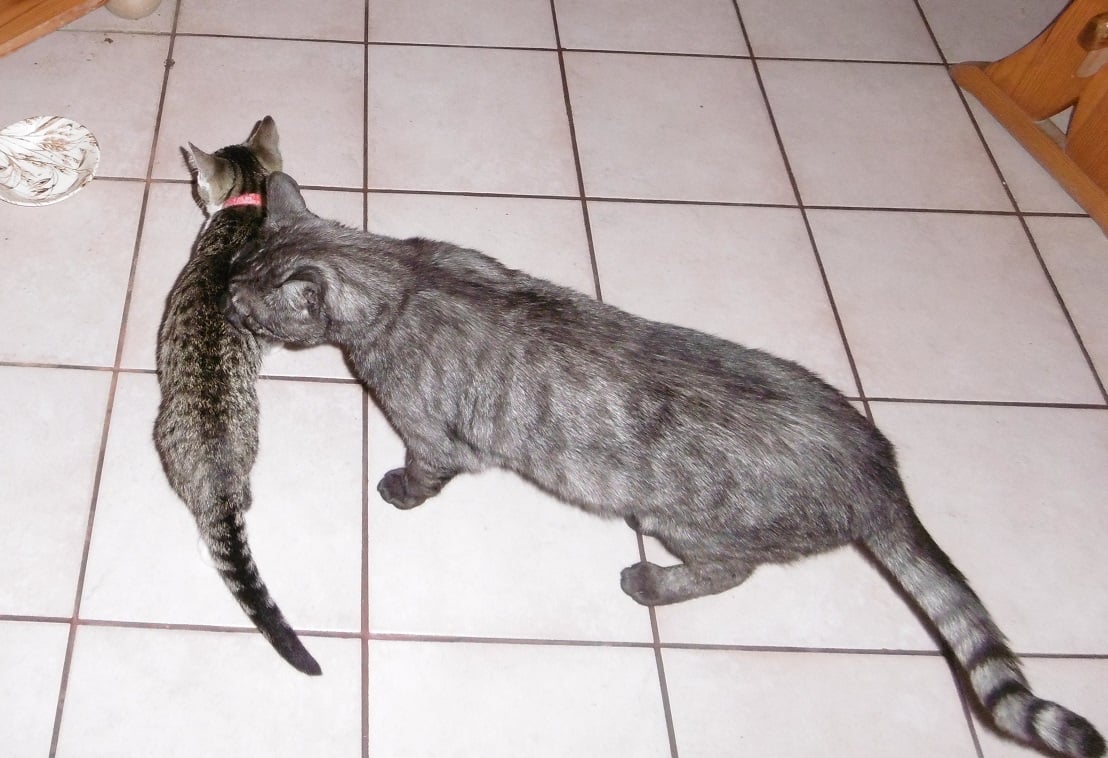 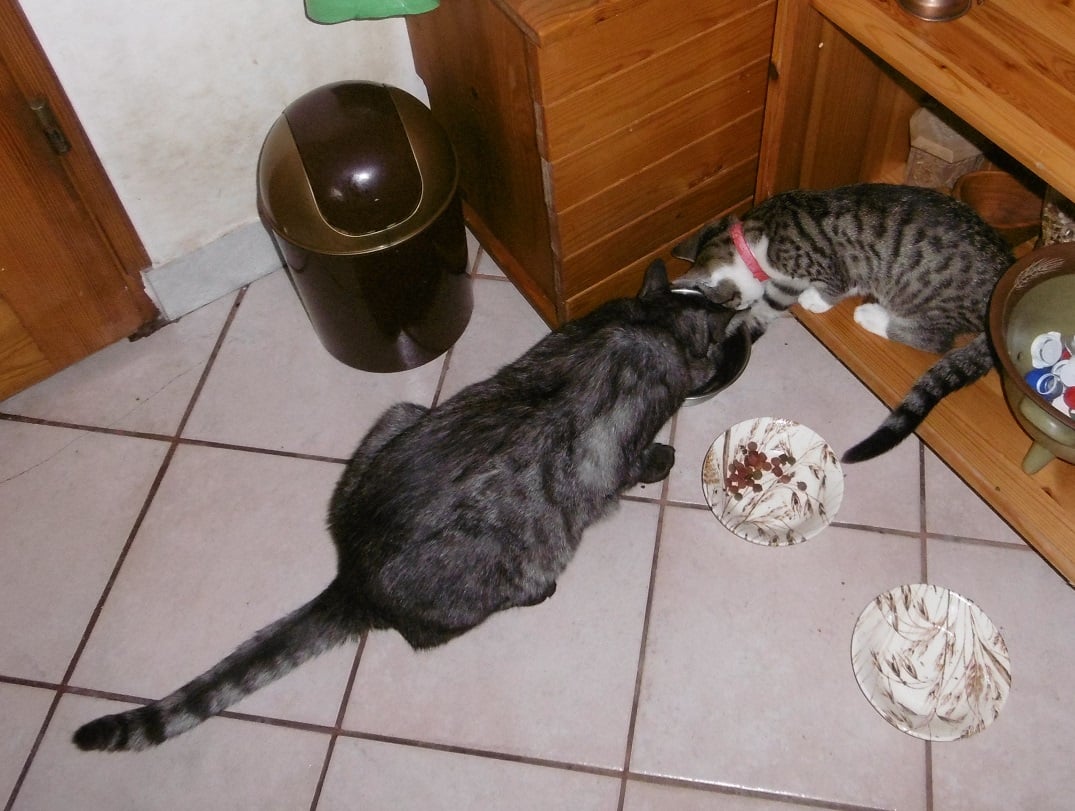 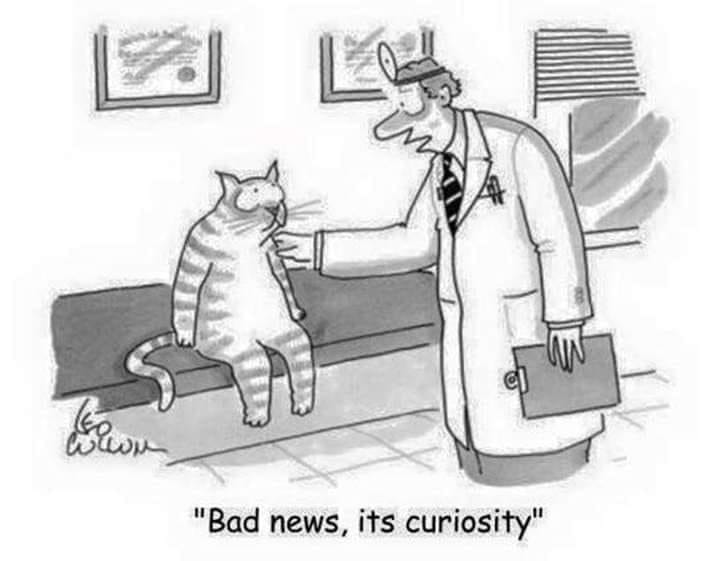 From Moments in Time, found by reader Ken. You can get yourself a Bible signed by that old atheist Donald Trump. Price: $37,500. 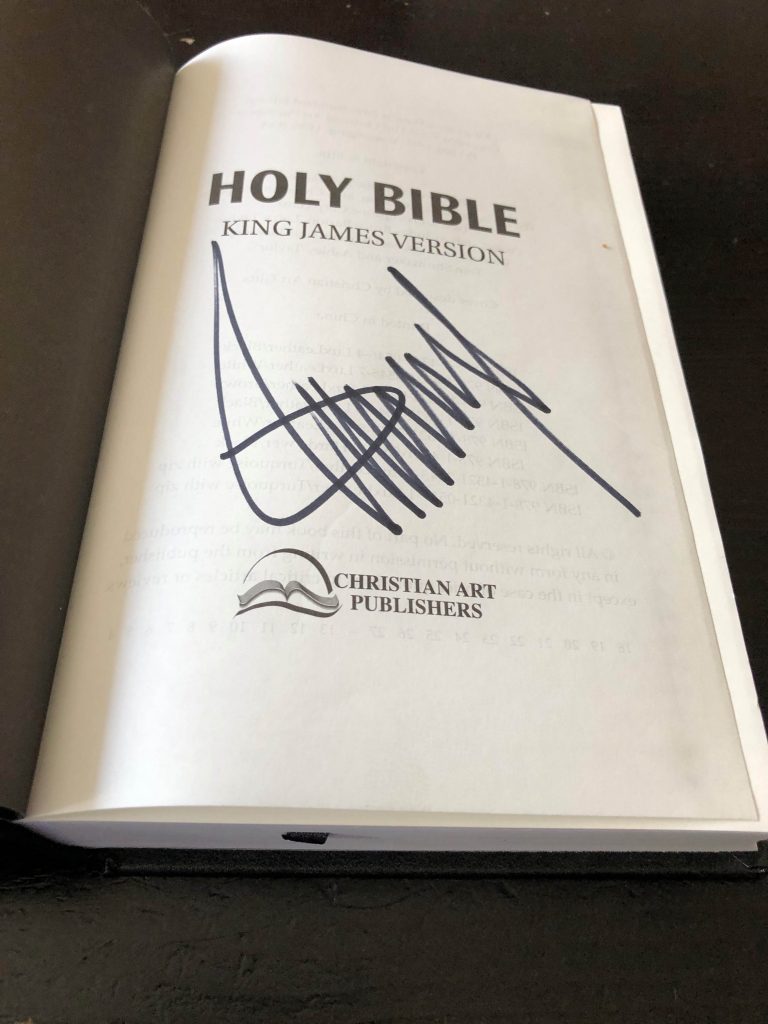 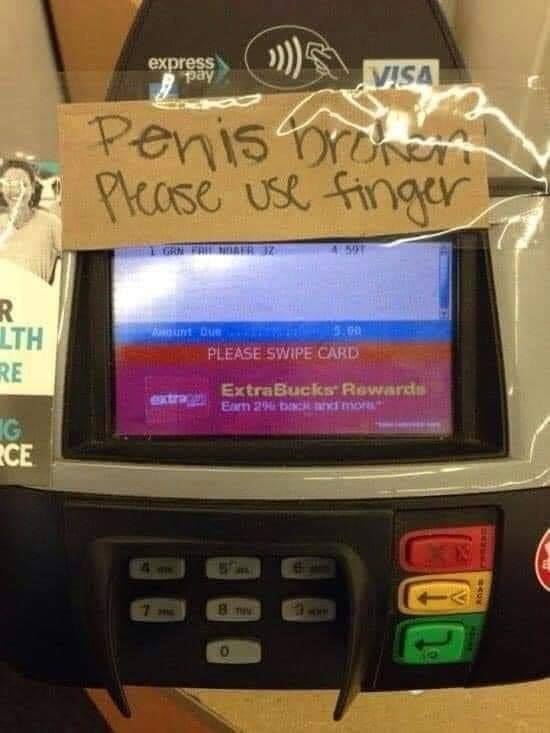 Titania’s still banging on about “womxn”:

Cisgender menstruators claim that we are ERASING their identity by banning the word “women”.

Two tweets from Simon. This first one is sort of “viral”; it’s shows businessman whose office overlooked a mallard nest a floor above the ground, and who realized the babies would have to jump to the cement. When they hatched, he went down and caught nearly all the babies, scooping up the stragglers. And then he led them to water. What a fantastic guy! (There’s music here if you want the sound up.)

Well, I don’t have the spoons today to figure out exactly what is going on, but this is a cool experiment.

Tweets from Matthew. Loaches often hang on to vegetation underwater, but some species climb out on vegetation to bask for a while.

I hope this lovely little mutant seal will be all right. You can read more, and see more photos, at the link:

Rare blue-eyed ginger seal pup found by biologists @ Sea of Okhotsk rookery. Nicknamed ‘ugly duckling’ for its appearance, the pup will be monitored to ensure its not rejected by the others like it happened years ago to another seal called Nafanya (3d pic) https://t.co/Nf3W6gHacn pic.twitter.com/0Gtnf9b0PW

Do you know what this is? Hint: count the legs.

When you spend all your time at the gym on your arms and forget all about your scrawny legs.