A couple of upset readers sent me links to the article below, but I don’t think it’s time to get upset quite yet. It’s not clear that the Cancel Culture will come for Darwin, though the Telegraph article below implies it. What it actually reports is that the Natural History Museum in London is assaying its evolution collection just in case they have to censor it because it bespeaks of “colonialism.” But nothing has been done yet beyond a survey.

Further, it would be hard to “cancel” Darwin, as he’s simply too important a figure in history and biology, to write him off. Nor was he a racist in the usual sense. He and his family were abolitionists, and Darwin couldn’t abide the poor treatment of blacks he saw in South America.  Yes, he made some bigoted statements, and was occasionally a white supremacist in his writings, but he was in fact less of a racist than most Brits of his time. If they’re going to come for Darwin, and put a caveat next to all his works because of his supposed racism, then there’s no hope for any white person before, say, 1930.

And, as we know, these caveats tend to bleed over into the work itself, so if Darwin gets canceled, that’s an inducement for teachers not to assign his works, like The Descent of Man, as students would object. Nor would the students want to read his work, as they’d concentrate on statements in Descent and Voyage of the Beagle, and ignore everything else: all the wonderful information and theory in a dozen books. 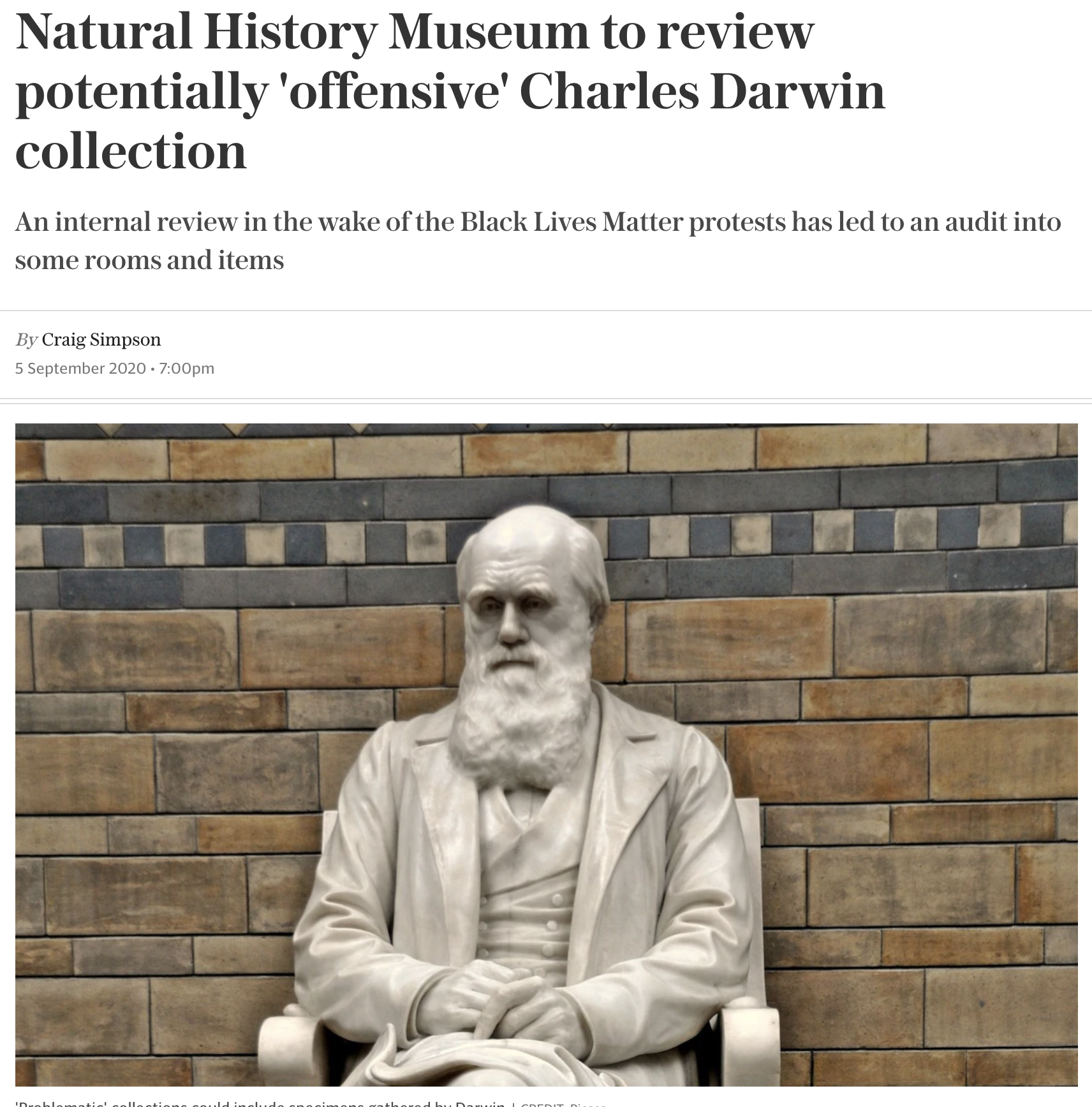 Here’s the gist of the article, and, as you see, it’s way too early to start defending Darwin against cancellation:

The Natural History Museum will become the latest institution to review it’s [SIC!] collections after an audit warned its Charles Darwin exhibitions could be seen as “offensive”.

An internal review, sanctioned in the wake of the Black Lives Matter protests, has led to an audit into some rooms, statues, and collected items that could potentially cause offence.

It warns that collections which some may find “problematic” could include specimens gathered by Darwin, whose voyage to the Galapagos Island on HMS Beagle was cited by a curator as one of Britain’s many “colonialist scientific expeditions”.

Museum bosses are now desperately seeking to address what some staff believe are “legacies of colonies, slavery and empire” by potentially renaming, relabelling, or removing these traces in the institution.

The executive board told staff in documents seen by The Sunday Telegraph that “in light of Black Lives Matter and the recent anti-racist demonstrations around the world” the museum would undertake a review of existing room names and “whether any statues (or collections) or could potentially cause offence”.

One of the institution’s directors said in internal documents that new action taken to address these issues would alter “the use and display of our collections and public spaces”.

Note the improper “it’s” in the first line. What kind of paper would let that in? At any rate, let’s not get our knickers in a twist about this quite yet.

The paper adds, though, that Joseph Banks’s collections might be “canceled” as well as stuff relating to Thomas Henry Huxley, who lectured to poor working-class people about science:

The presence of a statue depicting Thomas Henry Huxley, known as Darwin’s Bulldog, could be questioned due to the scientist’s racial theories.

But wait! There’s more! Could Linnaeus himself be on the chopping block?

The museum holds one of the largest collections of items gathered by Carl Linnaeus, the Swedish scientist who devised the Latin naming system of different species.

He thought Africans “indolent”, and his naming system could be seen as erasing indigenous terms for specimens then collected and renamed by European naturalists.

If the Torygraph writer knew anything about biology, he would know that Linnaeus’s system of binomial nomenclature, using Latin names, doesn’t erase any names, whether they be indigenous or European names. It’s a system of scientific nomenclature, not folk nomenclature. Most people don’t even know any scientific names save Homo sapiens.

Anyway, rest easy, folks—at least for a while!

32 thoughts on “Darwin next for cancellation?”