I figured that this kind of report was over and done with, as surely airlines know that it’s gender discrimination to ask a passenger to move to accommodate a religiously-based request not to sit next to someone of the opposite sex. Yet, despite lawsuits won by women who complain about being forced to move, the incidents persist. And the situations invariably involve male ultra-Orthodox (Haredi) Jewish men, who consider themselves polluted and violating the dictates of Yahweh should they touch a woman.

The most famous incident even has its own Wikipedia page: the case of Renee Rabinowitz, an American-Israeli psychologist. Flying to Tel Aviv in business class in 2015, she was forced by the El Al flight attendants to change seats at the request of a Haredi male. She sued for discrimination, and won a settlement of 6500 shekels (about $1800) plus a promise from El Al that it would change its policy so it was nondiscriminatory.

Curiously, the Israeli Religious Action Center (IRAC), which helped Rabinowitz win her case, then tried to put ads in the Ben Gurion Airport informing women of their rights. The airport refused, which is really bad form, and a decision that makes little sense. I like the ads: here’s one that was proposed: 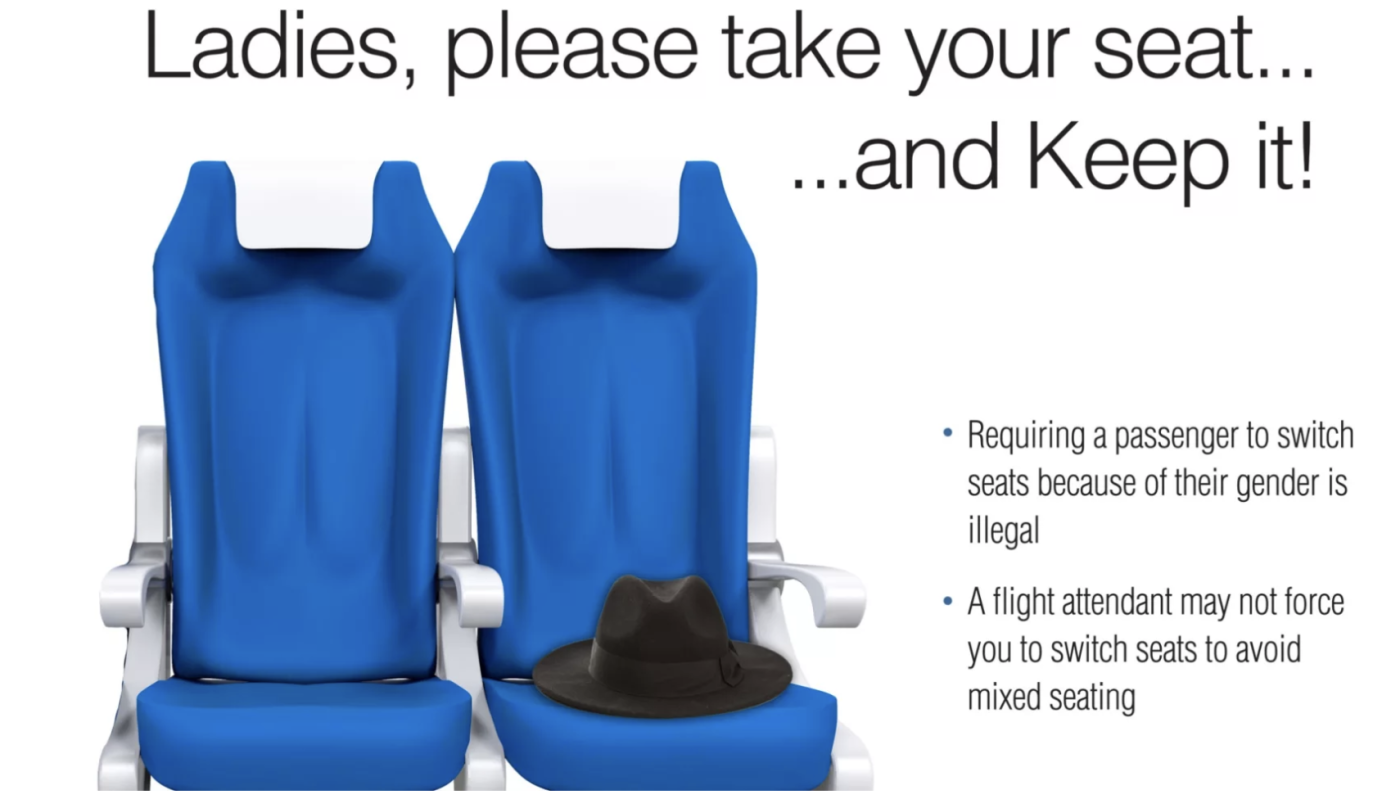 But I digress. Now there’s a new and similar case reported in the Guardian (click on screenshot below): 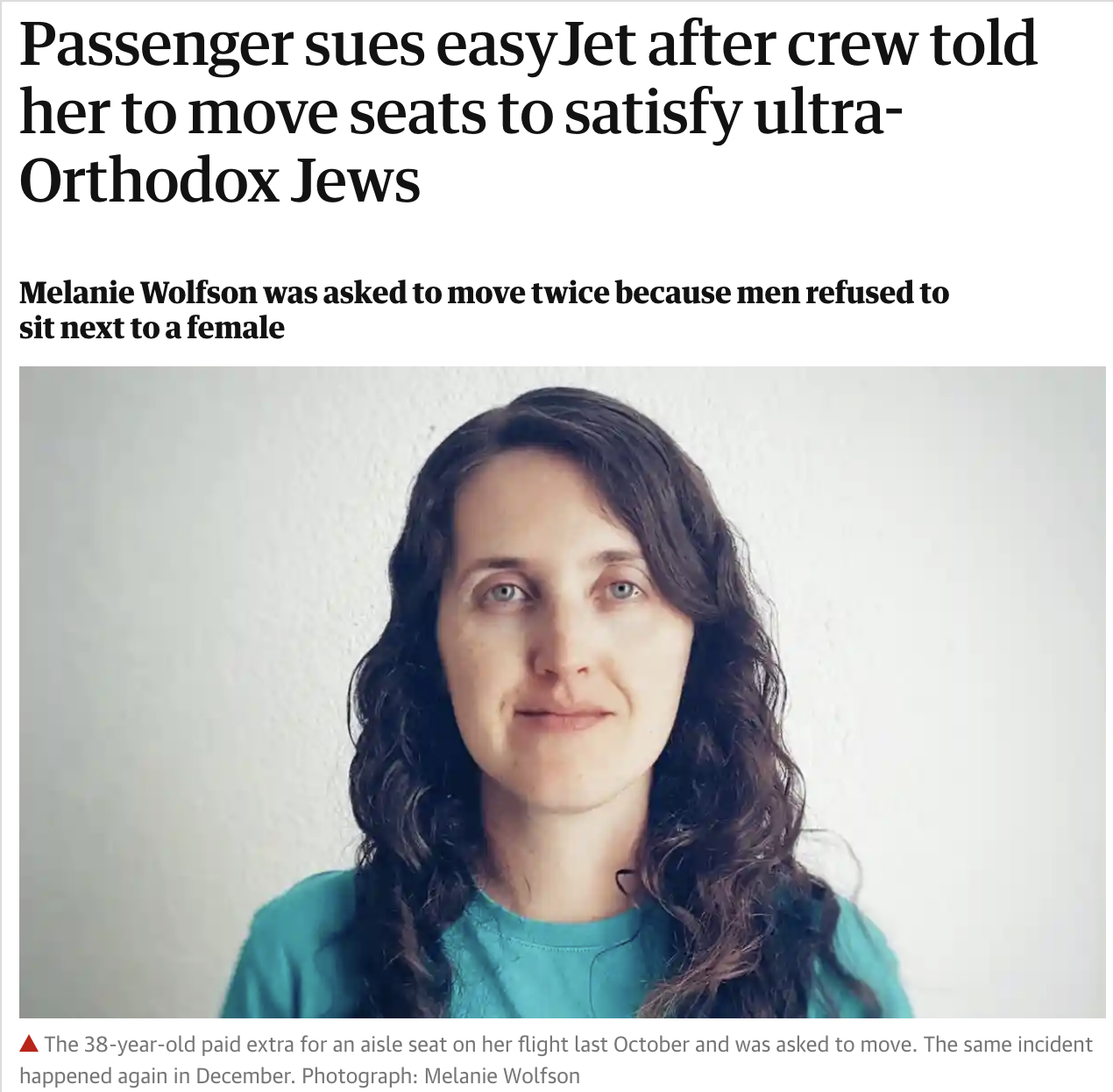 A British-Israeli woman is suing easyJet after the low-cost airline asked her to move seats on a flight from Tel Aviv to London following objections from ultra-Orthodox Jewish men who refused to sit next to a female passenger.

Melanie Wolfson, 38, is claiming 66,438 shekels (almost £15,000) compensation in a lawsuit filed on her behalf by the Israel Religious Action Center (IRAC), which won a similar case in 2017 brought against El Al, the Israeli national carrier.

Wolfson, a professional fundraiser who moved to Israel 13 years ago and lives in Tel Aviv, is also asking that easyJet bans its cabin crew from asking women to switch seats because of their gender.

According to the lawsuit, Wolfson paid extra for an aisle seat on her flight last October. An ultra-Orthodox man and his son, who were sitting in the row when she arrived, asked Wolfson to switch seats with a man a few rows ahead.

Wolfson says she was “insulted and humiliated” by the request. “It was the first time in my adult life that I was discriminated against for being a woman,” she told Haaretz.

They offered her a free hot drink if she moved, but what the bloody hell is that? A free hot drink? What kind of pikers is this company?  But they shouldn’t have asked her at all. Instead, they should have made the men move. Other flight attendants told Wolfson that they often ask women to switch seats away from Haredi men. The sad thing is that some women, and Wolfson is one, are nice and agree to move, but that doesn’t obviate their right to sue.  Israeli law prohibits discrimination like this on the basis of sex and other issues.

This happened again two months later, but Wolfson, fed up, refused to move. Two other women did move to allow the Orthodox men to have their seats.

Yes, I’m a secular Jew, but I’m not going easy on this kind of religious misogyny no matter who practices it. I tweeted to easyJet (below), but I doubt I’ll get a response. You can also contact easyJet using a form found here, or use Messenger here to send them a quick message. Maybe if enough people object, they’ll stop this practice.

.@easyJet
EasyJet flight attendants ask women to move so they won't "pollute" ultra-Orthodox Jews by touching them. A woman complained, got no response from the company, and sues them for 15K pounds. There's no excuse for religion-based discrimination. https://t.co/RrsT1gW0LT