People might be surprised to find that, although Israel is seen as a “Jewish state,” how secular it really is. As Phil Zuckerman notes in the article I mentioned the other day:

The only nation of secular significance in the Middle East is Israel; 37 percent of Israelis are atheist or agnostic (Kedem 1995) and 75 percent of Israelis define themselves as ‘‘not religious’’ or having a ‘‘non-religious orientation.’’ (Dashefsky et al. 2003).

That’s a lot more secular than the U.S., but not a surprise to many Jews. As the old joke goes, “What do you call a Jew who doesn’t believe in God?” Answer: “A Jew.”  But Israel still caters to its Orthodox minority, even when simple decency says that it shouldn’t.

A case in point, documented by both The Guardian and Newsweek, involves a subject I’ve written about before: ultra-Orthodox (“Haredi”) Jews refusing to sit by women, and airlines trying to accommodate these religionists by moving the women. (See my posts here, here, here, here, and here.)  In the most recent case, documented in the last two links, 82 year old Renee Rabinowitz—a Holocaust survivor—sued El Al for making her move, and won a $14,000 court judgment with the help of the Israeli Religious Action Center (IRAC), the Israeli equivalent of the Freedom from Religion Foundation. That judgment also prohibited gender discrimination in seating.

But recently the IRAC wanted to put up ads at Ben Gurion airport, near Tel Aviv, letting women know that they had the legal right to keep their seats despite the complaints of bigoted religionists. (The ruling against gender discrimination in seating applies to both buses and planes, by decree of the Israeli supreme court.) Sadly, the airport refused, which is tantamount to refuse to inform women of their legal rights.  The Israeli airport authority banned the ads as being “politically divisive.”

Here’s the ad that was banned: 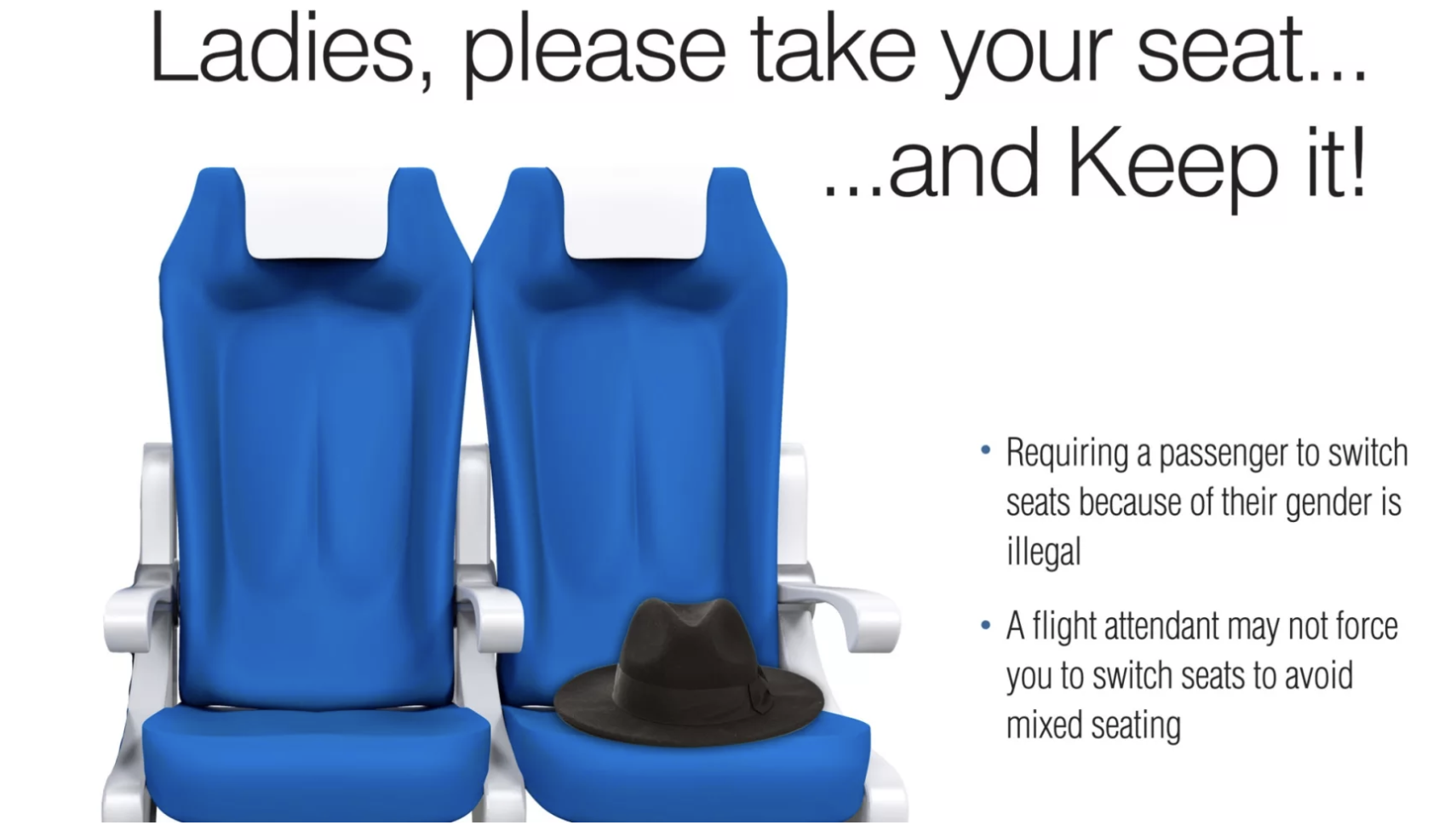 Well, it’s not at all politically divisive. It may be religiously divisive, but I think most of us agree that where religious dictum conflicts with civil rights, the latter must win. Render unto Caesar what is Caesar’s. I hope the airports reconsider, as their refusal to tell women of their rights allows religious sentiments to trump civil liberties.

IRAC also had a campaign video, which I’ve embedded below. The narrator turns into Woody Allen at about 1:20: