I don’t use the term “misogynist” lightly, because to me it means “someone who hates women,” not simply “a sexist.”  But what else can one call a group of orthodox Jews who won’t sit next to women on planes for fear they’ll be polluted?

This has happened three times in the last couple of months. First, in September, a group of Orthodox Jewish males caused an eleven-hour delay on an El Al flight from New York to Tel Aviv because they wouldn’t take their assigned seats next to women. As the Independent reported then:

. . . the flight did not take off on time, according to Shalom Life, after a group of Haredi Jewish passengers refused to sit next to women, believing that men and women should be segregated.

“People stood in the aisles and refused to go forward,” a passenger on board the flight, Amit Ben-Natan, told the publication.

“Although everyone had tickets with seat numbers that they purchased in advance, they asked us to trade seats with them, and even offered to pay money, since they cannot sit next to a woman. It was obvious that the plane won’t take off as long as they’re standing in the aisles,” he said.

The Haredi passengers agreed to sit in their assigned seats for take-off, but one passenger described the overall experience as an “11-hour long nightmare,” referring to the difficulty before take-off and the ensuing disturbances on board, caused by the Haredi passengers “jumping out” of their seats when the fasten-seatbelt sign was switched off.

Then on December 20, a Delta flight on the same route experienced the same trouble, though this time the flight was delayed by only half an hour. The Independent reports again:

.  . . a group of male ultra-Orthodox Jewish passengers refused to sit next to women, the third such incident in recent months.

The cabin crew on the Delta flight out of John F. Kennedy Airport tried to find seats for the men, but were met with refusal by other passengers, some of whom who took a dim view of the reasoning behind the request.

The same thing happened in October as well, and again on the same route, delaying the flight for an hour.

This is unacceptable. No passenger should be able to request not being seated next to a woman, even on religious grounds, and no passenger should be forced to move to comply with such a request. Any Jewish person causing such a disruption should be immediately booted off the plane. The scene of frenetic ultra-Orthodox men offering other people money to get a seat next to a man is simply repugnant.

Finally, lest you think this is a simple religious stricture that has nothing to do with regarding women as inferior (and you’d think this only if you knew nothing about Orthodox Jews), have a gander at what else the Independent says:

Many Haredi Jewish communities practice strict gender segregation and refrain from touching people of the opposite gender who are not close family members.

Haredi publications in Israel generally do not print pictures of women and girls. In 2009, the Israeli newspaper Yated Ne’eman famously doctored a photograph of the Israeli cabinet in order to replace two female ministers with images of men.

In the UK, the ultra-Orthadox [sic] Jewish community in Stamford Hill, north London, was recently criticised after signs requesting women to walk on a certain side of the street were erected, promoting segregation for a Torah parade.

Here’s one of those signs, and note that there’s no explanation: 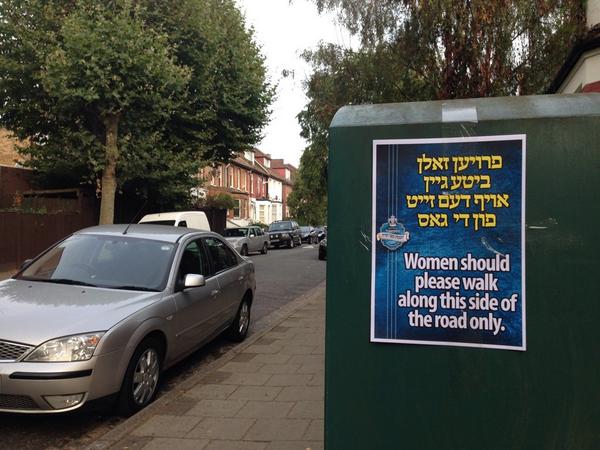 This gender segregation is one way that extremist “ultra-Orthodox” Jews resemble Muslims. In their synagogues men pray on the main floor while women are restricted to the back of the temple, often upstairs behind a screen.

Further, many Orthodox Jewish women, like Hasids, are the equivalent of breeder cattle, whose duty is simply to tend the home and pump out more young Jews.  They usually are forbidden to have real jobs, and must cut their hair short and wear wigs or other hair coverings because natural uncovered hair is considered “immodest.” In this way Jews also converge with Muslims. Finally, menstruation is considered unclean among the ultra-Orthodox, and women are obliged to take ritual purification baths after their periods. (Two good books on the repression of Orthodox Jewish women are Unorthodox: The Scandalous Rejection of My Hasidic Roots, and Cut Me Loose: Sin and Salvation after my Ultra-Orthodox Girlhood.)

Finally, there’s that infamous prayer.  MyJewishLearning gives the history and context of the phrase that begins the morning prayers of many Orthodox Jews:

“Blessed are you, Lord, our God, ruler of the universe who has not created me a woman.”

As the article notes, Orthodox apologists argue that this phrase merely shows gratitude that males have the privilege of performing more religious rituals, but it comes across as intolerant and sexist. And why would only men have that privilege? My own version of the prayer is “Blessed are you, O Ceiling Cat, who has not created me an Orthodox Jew.”

191 thoughts on “Misogynist Jews on a plane”