It’s Saturday, August 22, 2020, and September is drawing nigh. The good news is that it’s not “Bacon Lovers’ Day,” but National Pecan Torte Day, though I’ve never had one of them. (I’m sure I’d prefer pecan pie—my favorite of all pies.) The torte is like a pecan pie but it’s a cake. 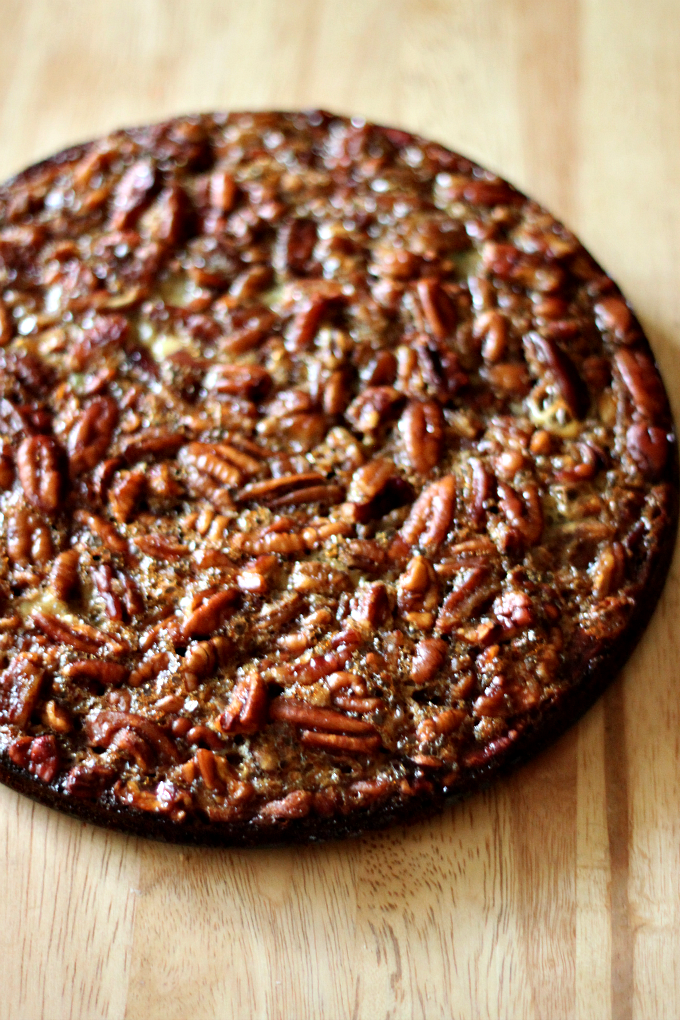 If the body does not get enough zinc, it may have difficulty producing testosterone – a key hormone in initiating sexual desire in both men and women.  Pecans provide nearly 10 percent of the recommended Daily Value for zinc.

Only ten percent?! But doesn’t that depend on how many pecans you eat? And is it therefore advisable to down a slice or two of pecan pie before sex?

News of the Day: First, when should you get your flu shot this year? I’ve heard people say that you should get it now, but I’d recommend following the CDC’s advice (my emphasis):

You should get a flu vaccine before flu viruses begins spreading in your community, since it takes about two weeks after vaccination for antibodies to develop in the body and provide protection against flu. Make plans to get vaccinated early in fall, before flu season begins. CDC recommends that people get a flu vaccine by the end of October. However, getting vaccinated early (for example, in July or August) is likely to be associated with reduced protection against flu infection later in the flu season, particularly among older adults.

It looks as if adults should get their shot between the beginning of September and Halloween, with older people skewing more toward the end of that period. But, as always, follow your doctor’s advice.

Actress Lori Loughlin and her husband, Mossimo Giannulli, have been sentenced to prison as well as fined and mandates to do community service, both for bribing USC and lying about their daughter’s resumes to get their kids into college. (The charges were wire and mail fraud.) Loughlin will do two months in prison, Giannulli five, and both will be convicted felons. The judge lectured them sternly, as they deserved:

During the hearings Friday, US District Judge Nathaniel Gorton addressed both defendants, telling Loughlin that he believed her statement was sincere, but pointed to what he described as her “fairy-tale life.”

“Yet you stand before me a convicted felon, and for what? For the inexplicable desire to grab more,” Gorton said. “To have whatever prestige and instant gratification that comes from being able to show off the admission of your daughters to a preferred university.”

Earlier in the day, Gorton told Giannulli that he “certainly did know better.”

“You were not stealing bread to feed your family,” Gorton said. “You have no excuse for your crime. And that makes it all the more blameworthy.”

Had they gone to trial, they could have gotten a lot more time: the sentence could have been up to twenty years, though wouldn’t be near that. Loughlin cried crocodile tears on her Zoom statement though she earlier pleaded not guilty. The idea of parents buying their way into college especially nauseates me, perhaps because I worked in one.

The miscreants in court last year:

Stuff that happened on August 22 includes:

You can read more about this “air raid” (really an aerial bombing) here.

There doesn’t appear to be a photo of Teddy in the car that time, but this short video from the Library of Congress shows him briefly, riding in a car in 1917:

No other player has surpassed that number, and Ryan still holds the lifetime strikeout record with 5,714. Here’s the record strikeout (the victim was Ricky Henderson):

These paintings have been recovered. There are actually four versions of “The Scream”, two in pastel and two in paint. It’s a much-satirized painting: 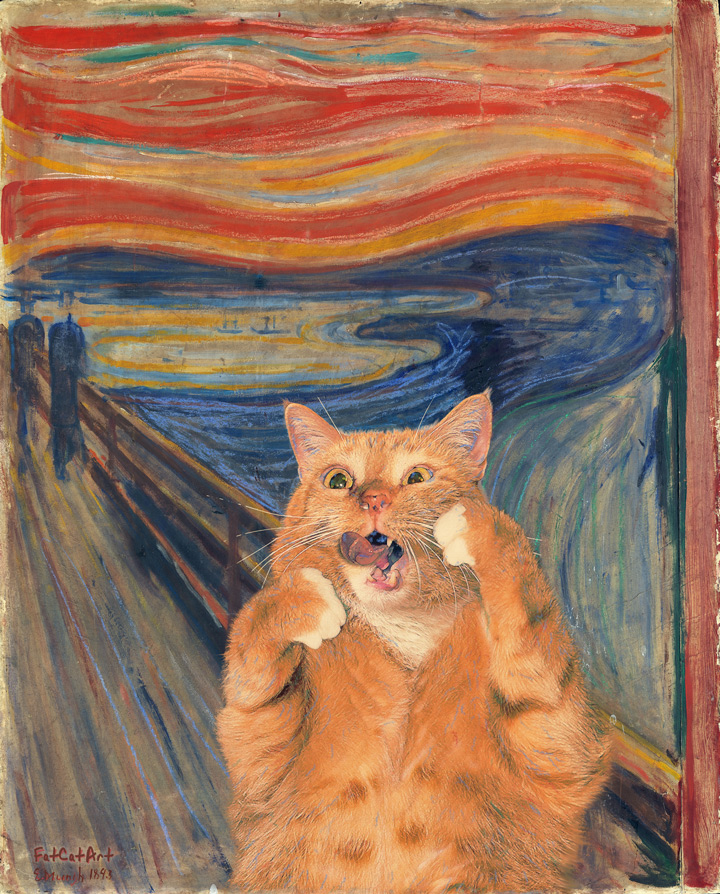 Herriman was the creator of Krazy Kat, one of the most innovative comic strips in history. Matthew and I both love it, and here’s a celebratory tweet:

Today is George Herriman's 140th birthday and I made a present for you Krazy Kat fans. All the comics discussed in Krazy: George Herriman, A Life in Black and White are now online along with unseen art and rare documents, right here: https://t.co/CIQKJ5BCk6 pic.twitter.com/p85izpu64R

I was preparing this post yesterday when I got interested in Riefenstahl again and wrote my post on “Triumph of the Will.” Here she is with Hitler and Goebbels; the propaganda minister also is seen speaking in the movie: 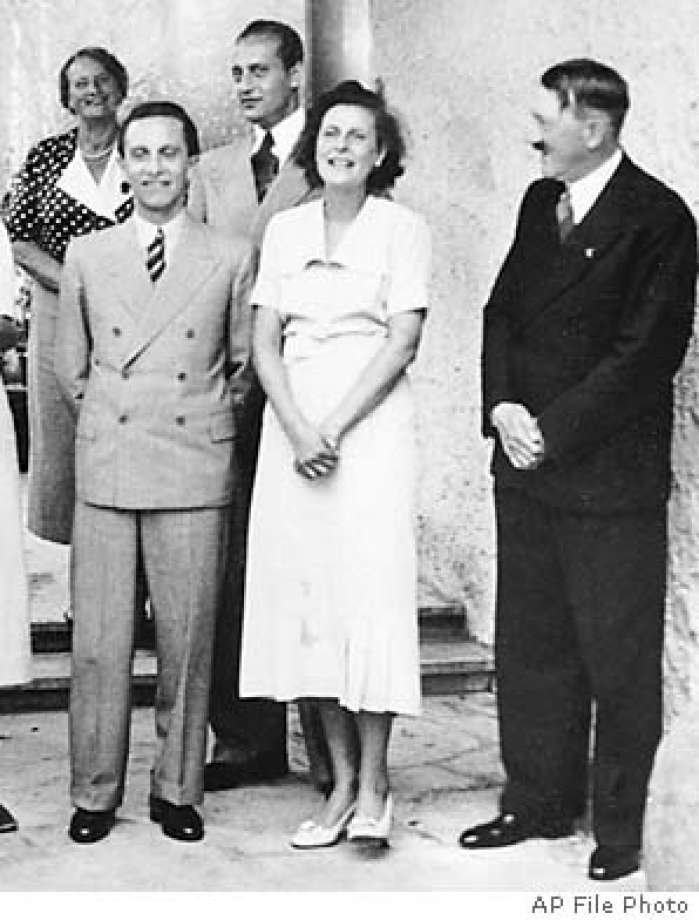 Those who died but didn’t meet their Maker (since there is no Maker) on August 22 include these two:

A: Are you coming home?
Hili: No, I’m going to seek a safe space. 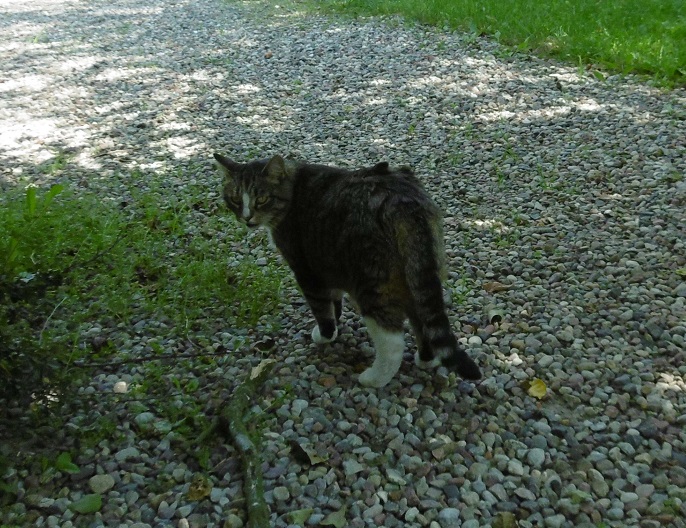 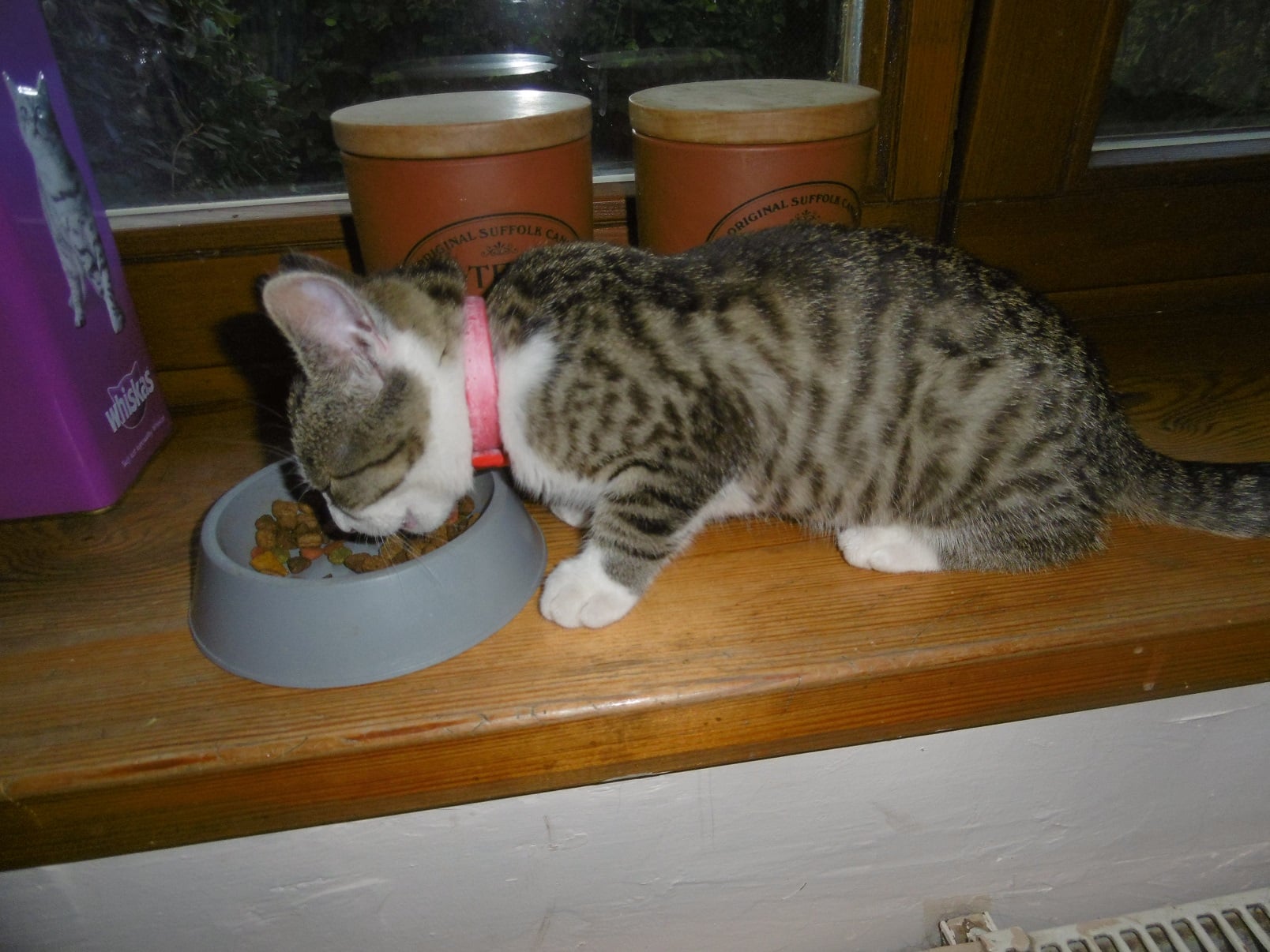 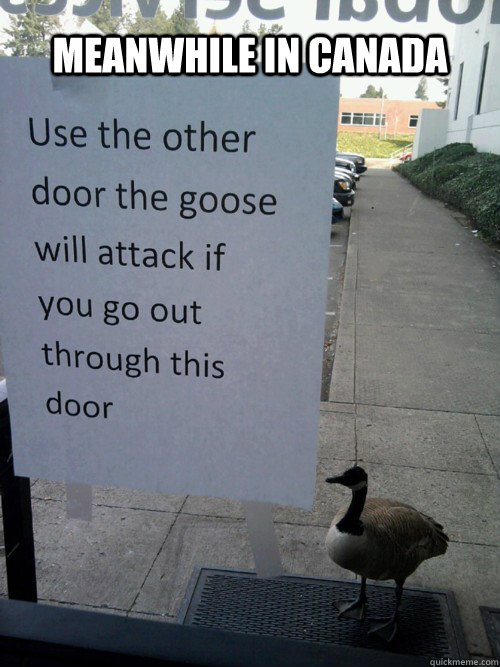 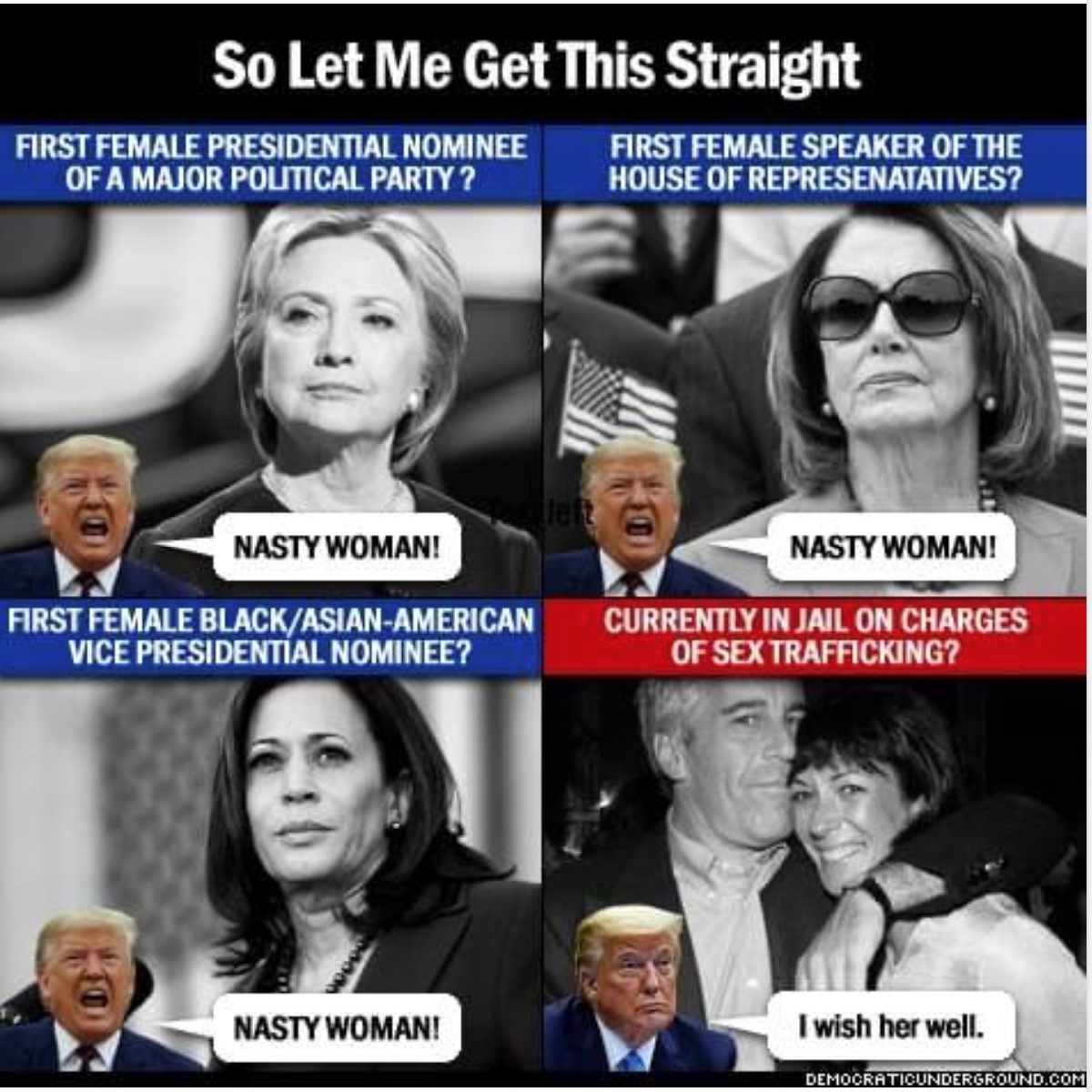 I love misheard song lyrics. This one was posted by reader Gregory on Facebook: 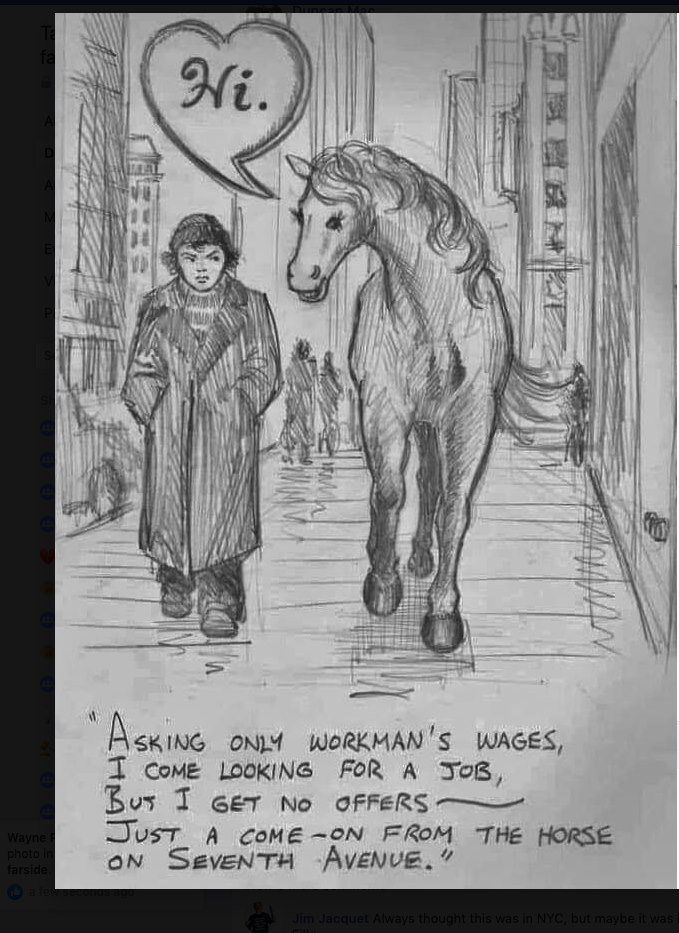 I made a tweet based on a remarkable case of mimicry tweeted by the Tokyo Bug Boys and sent me by Matthew:

This is a moth, Uropyia meticulodina. mimicking a dead, rolled-up leaf. Nothing is rolled here: the illusion is pure camouflage based on color and pattern. To see it move, watch the video at https://t.co/4p7Dq66UrL https://t.co/AkmQwxAFpO

From reader Barry. This is so cute that I can barely stand to watch it.

Am I the only one who has never seen a baby kangaroo?

From Simon, who notes that the Business Insider tweet can be misread. Can you see how?

I thought he killed Bin Laden for the whole 9/11 thing. https://t.co/TUhTRpmfQ6

A tweet from Dom, not especially laudatory about the competence of sheep. Click on each picture individually:

For anyone that doesn’t work with sheep… here’s a summary pic.twitter.com/c2In5bvTdT

Tweets from Matthew. First, SPOT THE FROGS! I couldn’t, but the answer is in the thread.

let’s play #FrogSpotting!!! if you find these two Gulf Coast toads I will be proud of you!! pic.twitter.com/v0vGmnro88

Matthew wondered if I would post on this, but of course I will: these are all mainstream movies, most of them good. And I’ve seen every one except for #21, #24, and #25. I was glad to see “Y Tu Mama Tambien” on the list, a wonderful movie that is often overlooked.

I was charged with making a list of the 25 most important sex scenes in history. Here is what I chose. https://t.co/etC6IKF8Jt

These are not terrible pandas—they’re just babies, and their antics are adorable.

It’s a lovely day in the enclosure and you are a horrible panda pic.twitter.com/XS22AkPpI6

Matthew’s having a bit of fun with this tweet, but this is another fantastic example of camouflage: a moth that mimics a broken twig. No, their natural habitat is not near a Coke can.

Astonishing camouflage, you can barely see it. https://t.co/LQNn6EVBHo