I’d heard about this kerfuffle, and wrote it off as a tempest in a petri dish until I saw this article in the Daily Beast. Surprisingly, the Beast, which I thought was on the liberal side of the spectrum,  took sides against the Perpetually Offended, as it should have given the ridiculous nature of the fracas.

You can read about it at the website below or just peruse my short take her (click on screenshot): 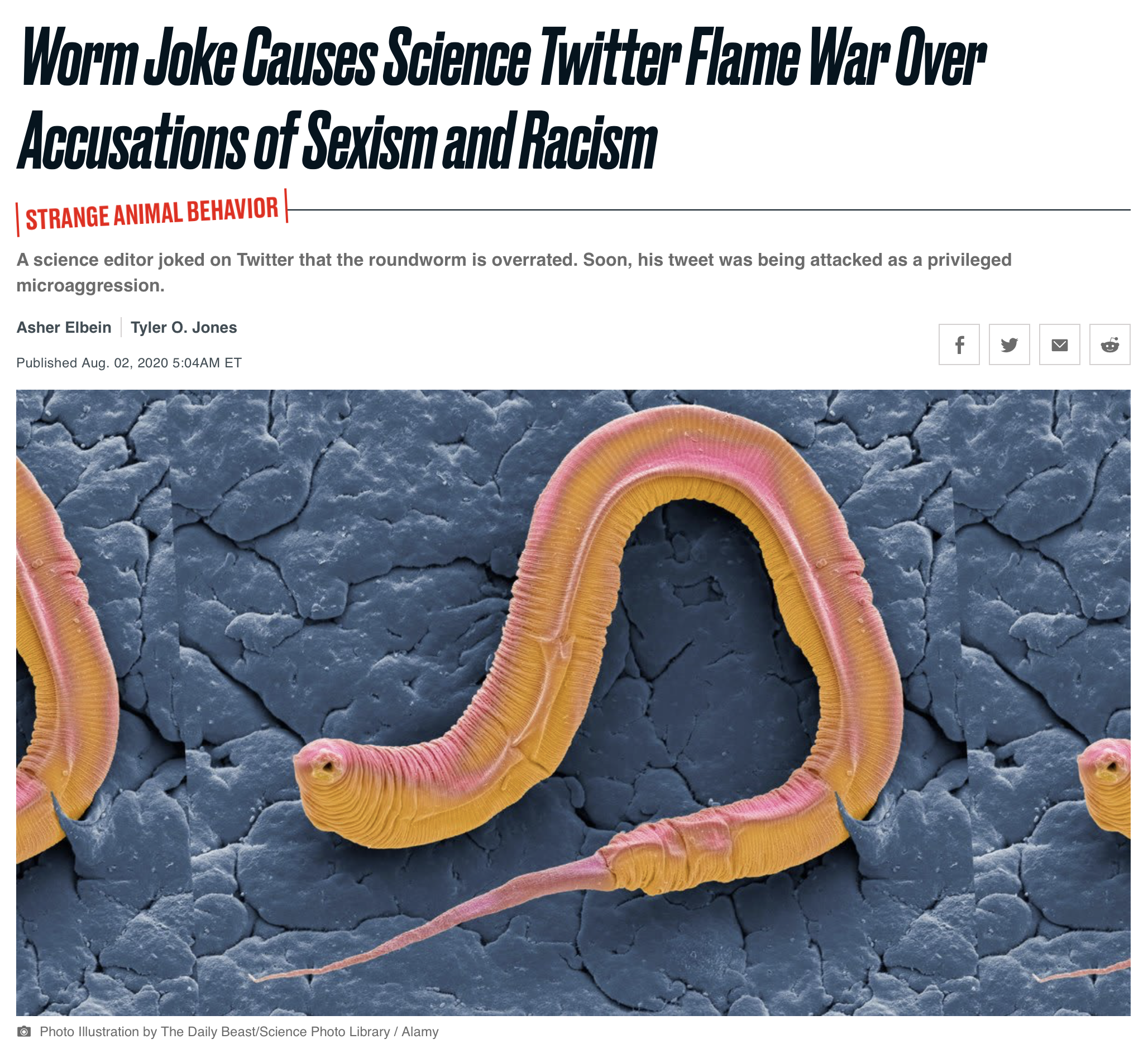 The ignition: Michael Eisen, a well known professor of genetics at UC Berkeley, an advocate for “open” science publishing, and editor of the respected journal e-Life, answered a Twitter question about the most overhyped animal.  He was clearly joking, as you can see below (Eisen’s also known for his sense of humor). Eisen suggested Caenorhabditis elegans, a roundworm that has been immensely useful in unraveling the genetics of development. It’s a “model organism,” which means that it’s studied in the lab rather than the wild.

This kind of mock dissing is applied to other “model organisms”, like the Drosophila I work on. That species, too, has taught us an immense amount about genetics and development, but throughout my career I’ve had to endure jokes about it not being a “real” species. I always laughed these off because a). it is a real species found in nature (it’s now a human commensal) and b). starting with T. H. Morgan in the early 1900s, it’s been the insect species used to study classical genetics, molecular genetics, and now evolutionary developmental biology (“evo devo”). From that species we’ve learned, for instance, about sex chromosomes, about gene duplication, about the linkage of genes on chromosomes, and so on—and that’s just the classical-genetics stuff.

I don’t think Eisen knew what he was getting into with his humorous response. (The worm is also a self-fertilizing hermaphrodite, which is what he means by “occasionally they fuck themselves”.)

C. elegans. They wiggle forward. They wiggle backwards. And occasionally they fuck themselves. That’s it. https://t.co/wYyXXViciJ

The pushback began immediately, as if Eisen somehow didn’t realize the importance of the worm. He quickly made it clear that he was joking:

I know. I love worms. Just having a fly-worm smack down.

But he had to clarify himself again, for one clarification only leads to another if you’re facing the Woke.  Although scientists have previously not been that immersed in Wokeness, they’re starting to become that way big time, buffeted by the winds of social change and perhaps a bit peevish and restive from the pandemic.

Something can be both an amazing model system and an incredibly boring creature – one might even say the latter is an advantage for the former.

Eisen even got faulted for using the word “fuck,” for his “frat boy humor” and for having a bit of fun on the Internet:

It’s like people forget Twitter is a public platform that reflects also on their professional life. This is something a frat boy would say and he doubled down, wondering why people are complaining he swore 🤦🏻‍♂️.

Some people, like Coleen Murphy, took umbrage because they had “grants and paper rejected based on *exactly* this reason.” I seriously doubt that this is literally true. Perhaps the rejections were based on a perceived lack of generality from results in C. elegans to other metazoan species, but they could have been rejected for other reasons. At any rate, that’s no reason to dump on Eisen. What we see here is animus aimed at editors and reviewers directed instead at Eisen:

Look, I'm sure he thinks this is all hilarious. But many of us have had grants and papers rejected based on *exactly* this reason (and you can't win- if it's conserved it's the same, and if not, it's just a worm thing) – all from a dude with HHMI funding and head of a journal.

It wasn’t long before the specter of racism insinuated itself into the discussion. But even black scientists pushed back:

All of a sudden it’s “Tweets not loading” huh https://t.co/tJ8ax3dZGE pic.twitter.com/XzCBA5z9rj

The Beast gives a bit more information. (Ahna Skop’s tweets are now hidden.) The invocation of marginalized people is the new version of an old rule—I can’t remember its name—which said something like “Any Internet argument will eventually devolve to comparisons with Hitler.” Now it’s “systemic racism” instead of Hitler.

By far the most prolific poster in this vein was Ahna Skop, associate professor of genetics at the University of Wisconsin-Madison and previous recipient of a Diversity, Equality and Inclusion-based award in 2018. Dr. Skop—who did not respond to a request for comment by The Daily Beast—argued extensively that making jokes about worms was merely the tip of the iceberg when it came to making jokes about marginalized identities, or an example of a ‘bystander effect’, a psychological theory arguing that individuals are less likely to offer help to a victim in a crowd. (For is it not said: First they came for the worm people, and I said nothing, as I was not a worm person?)

In the resulting threads, Dr. Skop—who identifies as “part Eastern Band Cherokee” and “disabled with EDS”—and others consistently failed to publicly respond to Black scientists like herpetologist Chelsea Connor, who tried to point out that this was a ridiculous conflation.  In a private communication Connor shared with The Daily Beast, Skop doubled down, arguing that as she had previously been harmed by entrenched sexism, her concerns regarding the worm joke were justified.

Oy!  But sensible people like Dr. Berg tried to defuse the crisis with the correct claim “it was only a joke”. She included screenshots of Skop’s tweets:

doubling down on main I see pic.twitter.com/FmWCMxVOEU

Let us bring this ludicrous squabble to an end with a quote from the Beast (criticizing the Offended) and a cartoon encapsulating the gist of the battle:

In falsely equating the real oppression of people belonging to marginalized groups to a Twitter joke about a roundworm, Wormageddon 2020 offers a clear example of how white and white-passing women misuse the language of diversity, equality and inclusion, with little accountability and self-awareness, and without any interest in the hurt that such frivolous invocations cause the people they’re theoretically defending. Someone who took the struggles that marginalized people face in academia seriously, after all, would not invoke them to win a Twitter argument about whether a worm joke is rude. “That comparison should never have been the knee-jerk reaction for them,” Connor said. “And then the response [to criticism] should have been better… The harm done stays with us and they get to log out and forget that this ever happened and let it ‘blow over’ meanwhile we have to work to fix what they did.”

My take: Eisen and Connor 42, Offended Worm People 0.  In this case Eisen properly refused to be mobbed, and the attempts to demonize him backfired, so that people like Skop have come off looking ridiculous. I’m just wondering if this episode shows a pushback against cancel culture, as did Trader Joe’s refusal to eliminate the brand names of its ethnic foods.

It was just a worm joke!