Well cut off my legs and call me Shorty (is that ableist?). A new report in the journal Nature Communications shows that some bacteria can remain dormant for over 100 million years in marine sediments—an unbelievable amount of time for an organism to remain “alive”—if you call it “alive.” I do: after all, the bacteria collected and revived by the researchers retained their ability to metabolize, take up labeled organic substances, and reproduce.  Dormancy, to me, at least, is not the same thing as “death”.

Click the screenshot to read the paper (the pdf is here and the full reference is at the bottom). 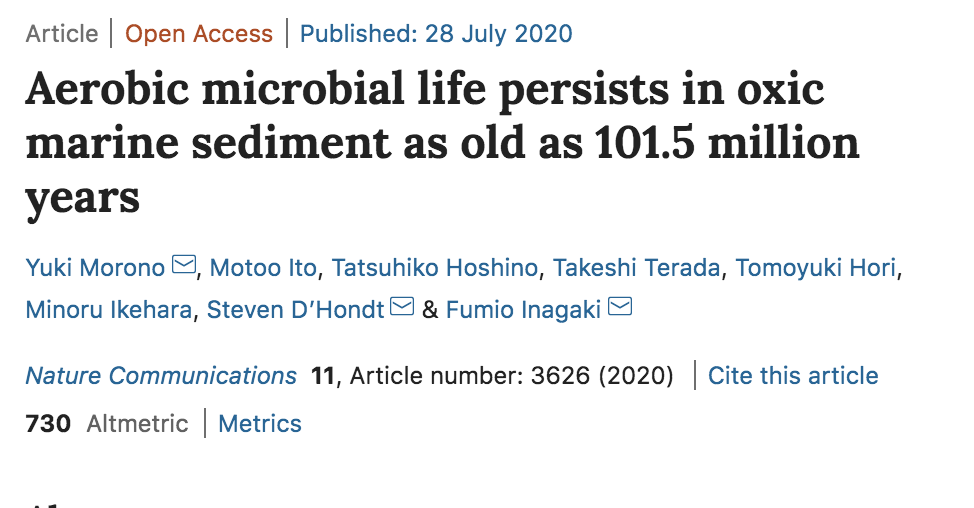 The experiment was laborious yet the results are simple. If you want to know the gory details, the paper is there for your reading.

In short, the authors sampled clay sediments of different ages from the South Pacific Gyre, and did so in a way that, they aver, precluded contamination with modern bacteria. Supporting their claim that the bacteria they found in the inside of sea-floor cores were really bacteria in situ, they argue that the clays are almost impermeable to bacteria, with very low pore size, and there are thick impermeable layer above the sampled sediments. And there were strict precautions to prevent contamination.

To see if any bacteria in the sediments were capable of biological activity including reproduction, they tested for “anabolism” (the synthesis of molecules) by incubating the bacteria with oxygen (controls lacked oxygen) as well as radioactively labeled molecules that could be taken up and made into proteins and other molecules. The added molecules included 13C6-glucose, 13C2-acetate, 13C3-pyruvate, 13C-bicarbonate, 13C-15N-amino acids mix [mixture of 20 Amino Acids], and 15N-ammonium. Another control involved killing any bacteria with formaldehyde.  The researchers could then visualize the bacteria and see, through fluorescence microscopy and radioactive visualization, if the precursor molecules had been taken up by bacteria.

Finally, the researchers could isolate bacteria at various times (the samples for activity, growth, and bacterial presence were taken at 3 weeks, 6 weeks, and 18 months) to see if the bacterial titer was increasing, i.e., they were dividing. Finally the authors isolated RNA (16S rRNA) from individual bacteria, amplified it, sequenced slow-evolving RNA, and saw what groups of living bacteria the ancient bacteria belonged to. (This assumes that we can still recognize the groups from modern sequences, but these molecules evolve very slowly).

Here’s a figure from the paper showing photos of the bacteria, with the same bacteria then examined for uptake of added molecules. The caption is complicated, but you can see that, especially with added amino acids (and oxygen), the cells glow furiously (d and h are electron-microscope images of the same bacteria shown fluorescing in the rows).

2.) The bacteria divided, as measured by the increase in numbers over time in the samples.

5.) How did they survive? One thought was that they formed dormant spores, which can last a long time in bacteria. But this suggestion is ruled out because none of the bacteria identified were from spore-forming lineages. It seems the bacteria simply became dormant, surviving without any—or hardly any—detectable metabolism, and without reproduction.

This raises the question: were these things really alive for 101.5 million years? I can’t see why not, unless you think that something that becomes dormant is dead, and then, Lazarus-like, revives when the dormancy is broken. If you take the authors’ word that sufficient precautions were taken to prevent contamination with modern bacteria, then what we have here are the oldest living organisms on Earth.

54 thoughts on “New report: Bacteria can remain alive for over 100 million years!”