Over the past few decades, there have been many arguments about what caused the extinction of the dinosaurs at the end of the Cretaceous—about 66 million years ago. One theory is that volcanic eruptions from the Deccan traps, a volcanic complex in what is now India, spewed carbon dioxide and sulfur dioxide into the atmosphere. This weakened the Sun’s radiation striking our planet, cooling the Earth and leading to the destruction of habitat suitable for dinosaurs.  Some support offered for this theory is that volcanic eruptions were likely responsible for the end-Permian extinction about 252 million years ago. That was the most dramatic extinction in life’s history, wiping about 96% of all marine species, 70% of terrestrial vertebrate species, and 83% of all genera. Three-quarters of all the species on Earth went extinct in a relatively short period of time.

Most paleobiologists, though, think the end-Cretaceous extinction was due to the collision of an asteroid with the earth right before the dinos started going extinct: the famous 10 km asteroid whose collision left a 180-200-km diameter crater in the present Gulf of Mexico. This spewed dust, ash, sulfates, and other matter into the atmosphere, also causing global cooling (the “impact winter”) and habitat loss for dinos. This extinction was very rapid.

Here’s a reconstruction of that impact, with the Wikipedia caption, “An artist’s rendering of an asteroid a few kilometers across colliding with the Earth. Such an impact can release the equivalent energy of several million nuclear weapons detonating simultaneously.” 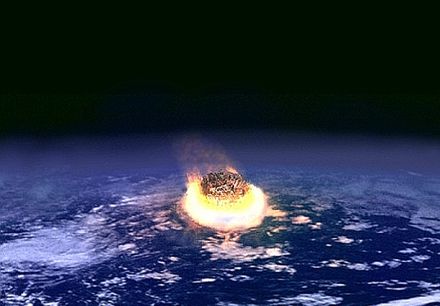 Of courses these causes could have acted together, but a new paper in PNAS (click on screenshot below, pdf here; reference at bottom), used complicated models to judge which of the two causes was most important. They conclude that the asteroid was the primary factor, and in fact the volcanism could have even tempered the global cooling caused by the asteroid.

Now judging the climate models, which coupled estimates of the effect of aerosols and other ejecta on climate change, and then the effect of climate change on suitable habitat for dinosaurs, is beyond my pay grade. But the authors do conclude that the Deccan volcanism was highly unlikely to have contributed to the end-Cretaceous extinction, with the asteroid impact more likely. (It’s not just the models in this paper, either; other recent work suggests that the volcanism was too prolonged to account for the relatively quick extinction, nor was it likely to have caused sufficient climate change that would affect habitats in the required ways.)

The asteroid models show a relatively quick onset of subfreezing temperatures that would have lasted 3-16 years, with temperature recovering only after 30 years. That would have accounted for the geologically instantaneous extinction of the dinosaurs. (Some aquatic reptiles like turtles and crocodiles managed to find refuges that kept their lineages going.) Further, volcanic activity could have created a kind of “greenhouse effect” that actually ameliorated the effect of the asteroid.

Here are a few figures from the models showing the effect of volcanism vs. asteroids on suitable dino habitat (the redder the color, the more suitable the habitat would have been for non-avian dinosaurs). The first three show a control without Sun dimming (A) and then a 5% dimming (B) and a 10% dimming (C). 5% was enough to do them in.

These two figures show the same effect on habitat with the author’s Deccan-trap volcanism model. As you see, there’s plenty of suitable habitat left (in red):

And the effect of the asteroid. (F) assumes that the volcanoes were inactive, and (H) that they were active. No dino habitat in either case: 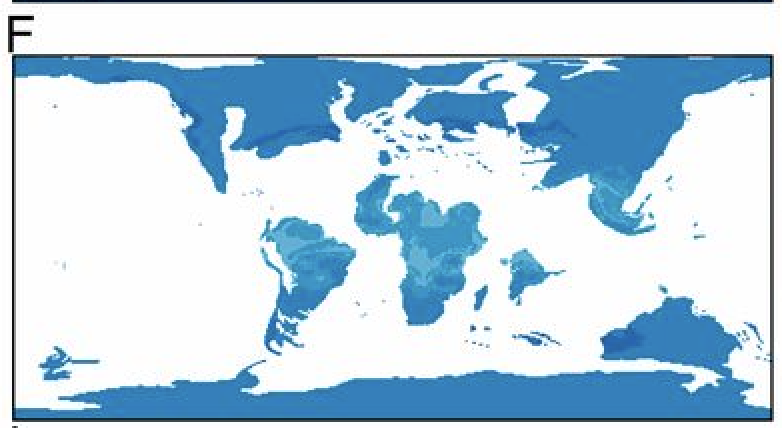 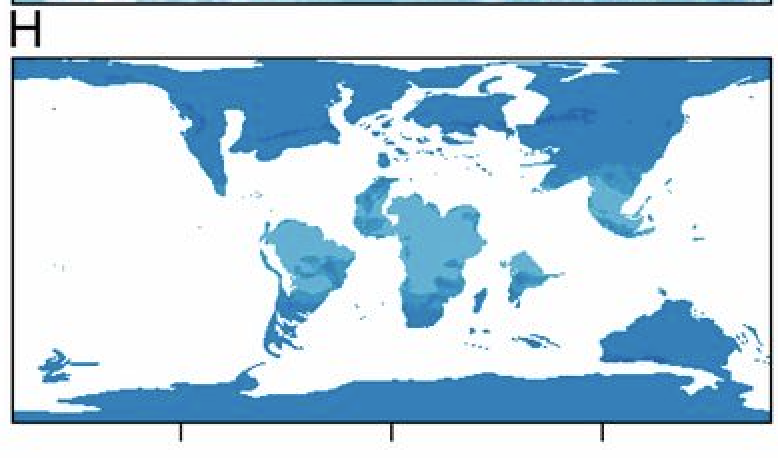 You can judge the models for yourself if it’s within your pay grade. Suffice it to say that, despite the assertiveness of the paper’s title, this won’t settle matters, as one can always quibble about the details of the model. But assuming the models are reasonable, it does support the consensus view that it was an asteroid, not volcanoes, that brought the dinosaurs to grief.

65 thoughts on “New study shows that the asteroid, rather than volcanism, likely caused the end-Cretaceous dinosaur extinction”