Language changes, of course, but it usually changes when the general populace re-construes a term, not when a dictionary changes a word’s meaning for ideological reasons. The latter seems to be what has happened with the Merriam-Webster definition of “trans woman”, which has followed the argot not of the general populace, but of a certain segment of the populace that adheres to an ideology about transexual people.

This is what the definition is now (click on screenshot):

I couldn’t find the old definition easily, but below you can see what was apparently the old one reproduced by a Twitter user: “an adult who was born male but whose gender identity is female”. To me, as I discuss below, the older definition is better and less problematic. For if you adopt the new one, as we’ll see, you go down a confusing definitional rabbit hole.

Merriam Webster has changed the definition of 'trans woman' from 'an adult who was born male but whose gender identity is female' to 'a woman who was identified as male at birth' pic.twitter.com/ShkCA50Jxd

The change is clear, and the reasons are obvious. Last year the trans woman was born as a male, while this year trans-women are defined as having been flat-out “women”, but were somehow “identified as a male” at birth.

Right away we see the problem, for how can trans women born with the sex of a male (presumably the ability to produce sperm, along with secondary sexual traits like a penis), actually be women from the outset? “Gender”, taken as the sexual identity assumed by someone regardless of their biological sex, cannot be determined at birth. (I’m leaving out of this discussion the relatively few trans women born as hermaphrodites or of ambiguous biological sex.)

But let’s press on. A “trans” woman, according to the new definition, is identified as a male at birth but is really a woman, presumably at birth. So what does Merriam-Webster construe as a “woman”? Here’s their up-to-date definition (I don’t know if it’s been changed):

Okay so a trans woman is presumably “an adult female person”, though not an adult when born.  So what is the meaning of “female”? Here it is, first as an adjective and then a noun: 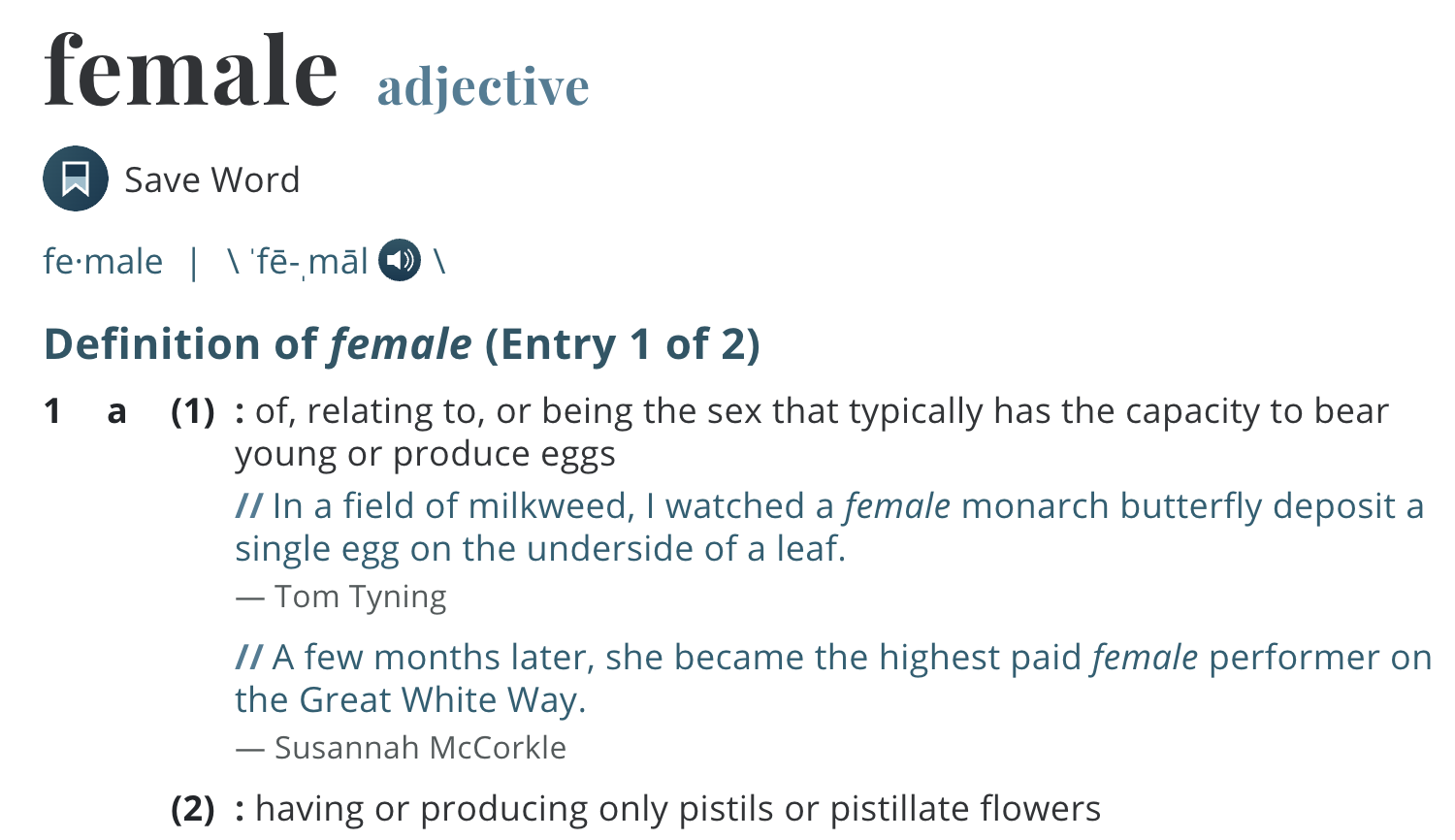 In both cases “female” corresponds to my idea of the female or biological sex: someone born with the potential to produce eggs—the larger of the two gametes. In other words, I see nearly all trans women as people who were born as biological males and who, either as youngsters or adults, assumed the gender identity of female. As a biologist, that definition, which corresponds to Merriam-Webster’s old one, doesn’t seem problematic.

Here’s the dictionary’s definition of “male” as both noun and adjective: 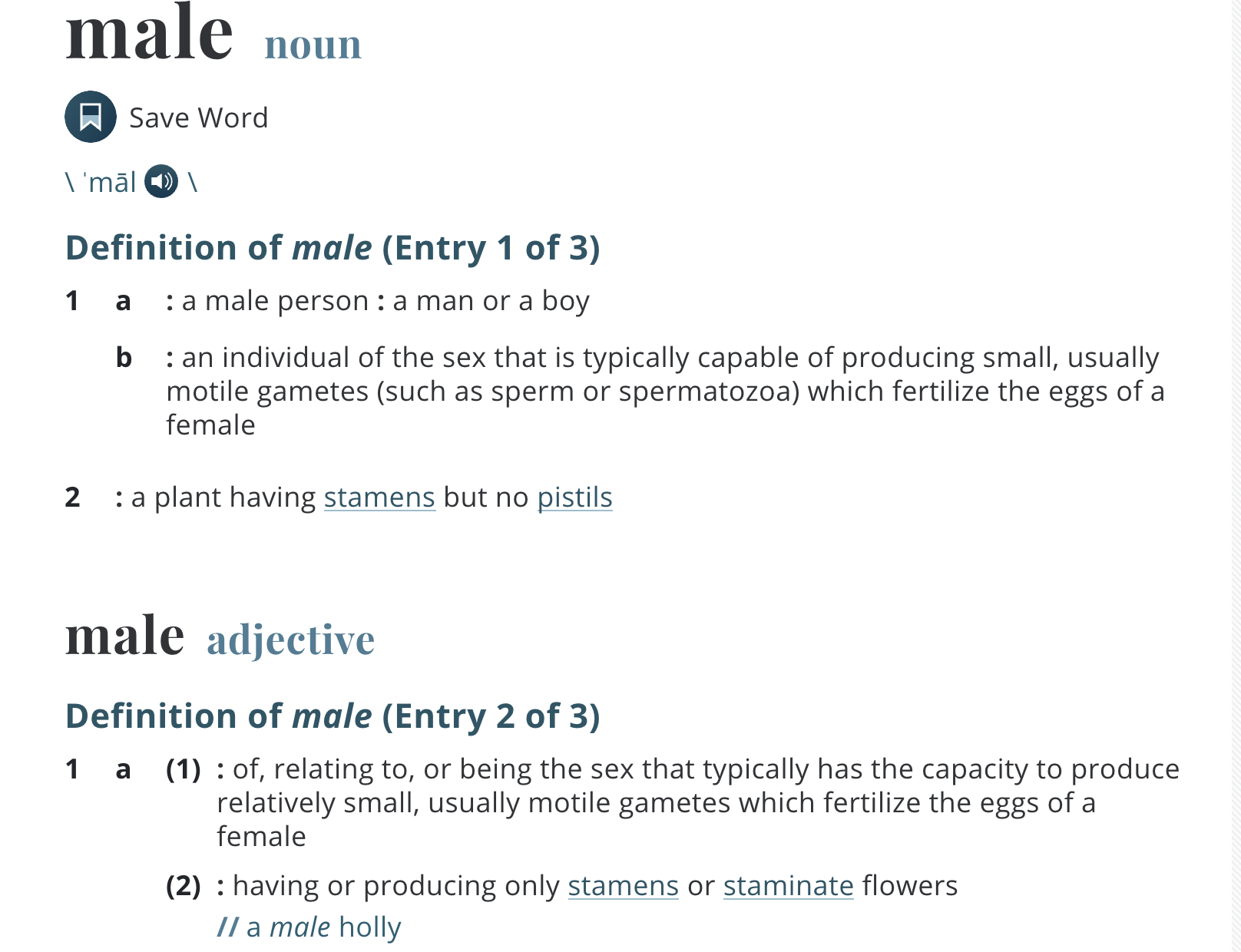 Maybe I’m making too much of a to-do about this, for one could construe “identified as a male at birth” as meaning “corresponding to the definition of a male at birth”. Yet the new definition is deeply problematic in itself, for it simply defines a transgender woman as a woman; but if you unpack the definition of “woman”, it turns out to be a female person, who then turns out to be a person who “typically bears young or produces eggs.” So according to the dictionary itself, a transgender woman is not a woman, for they can’t produce eggs or bear young. In other words, Merriam-Webster could be accused by some not just of confusion, but of transphobia. They contradict themselves.

This definitional mess seems to be the dictionary’s way of making a political statement that is not universally accepted: “Transgender women are women.” As I’ve argued before, transgender women have the gender of women but the biological sex of men, though they can alter their secondary sexual traits through surgery or hormone treatment.

Let me hasten to add that I have no problem with calling transgender women “women,” which is their preference, and in most cases, but not all, they should be treated as biological women (sports, prisons, and rape counseling are some of the few exceptions that I’ve discussed). And in no case should they be discriminated against morally or legally, except perhaps in the few cases I just mentioned. They are not inferior, they are not to be considered ill or weird; they are just people whose gender identity does not correspond to their their biological sex. Some may call me a transphobe for saying this, but it really comes from my studies as a biologist and from the biological definition of “sex” in animals.

Likewise with trans men, but you can look up the words yourself. Start with the new definition:

Like the definition of trans woman, this flatly asserts that “trans men are men”.  That causes the same problems as trans women, being contradictory and confusing.