Although John McWhorter, a professor of English and linguistics at Columbia University, is also a contributing editor at The Atlantic, his new essay on police violence was not published there. Rather, it’s in Quillette. Given that in length, style, and quality (it’s very well written and makes cogent points) it would be suitable for The Atlantic, I’m guessing that he didn’t even try to publish it there. That’s because it makes an argument that is politically uncongenial to The Atlantic and to much of the Left:  that perhaps the claim that black men get shot by police at a rate higher than their frequency in the population  is not a function of police racism, but of a greater frequency of interactions between blacks and police due to a higher crime rate in black communities.

This idea is heterodox, contrarian, and is suitable for Quillette. But no mainstream Leftist media would ever touch it, even though it might contain some truth. It’s not ideologically acceptable to say that while there are some racist cops, the difference in the relative frequency of blacks versus whites killed by cops could be due to a higher crime rate among black males and in the black community, perhaps itself a function of poverty that breeds crime. This is a valid hypothesis, but it taboo for most of us to discuss. As black men, however people like McWhorter and Glenn Lourycan say this without fear of being deemed “racists”. 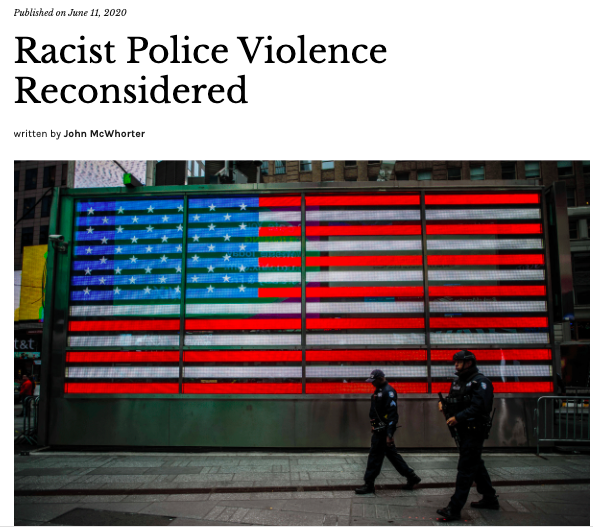 . . . .it remains true that black people are killed at a rate disproportionate to their percentage of the population. Does this decisively demonstrate racial bias or murderous animus on the part of American law enforcement? Blacks represent about 13 percent of the US population but about a quarter of victims in cop killings. Whites constitute about 62 percent of the population but only half of those killed by the police. With slight fluctuations, these trends have been broadly consistent.

But you can’t say that this itself is prima facie evidence that cops are racist, and that they murder men like George Floyd because they’re black. As McWhorter notes:

However, these figures are not necessarily evidence of police racism. According to the Washington Post‘s database, over 95 percent of the people fatally shot by police officers in 2019 were male, and no serious-minded person argues that this is evidence of systemic misandry. So what, then, accounts for the disproportionate representation of black men among those killed by cops?

McWhorter gives lots of examples of both black men and white men killed by cops in nearly identical circumstances, but the deaths of whites gets much less attention because it doesn’t play into a narrative of police racism. One is Tony Pimpa, a 32-year-old white man who suffocated in 2016 when a cop put a knee on his back for 13 minutes. Timpa’s crime was calling the cops himself for help because he feared he might be a danger to himself when he was drunk. That’s just the first example, and McWhorter gives others:

Timpa was, of course, just one case and might be dismissed as an anomaly. On the other hand, we are told that what happened to George Floyd is what happens to black people “all the time.” But because the killing of black suspects by white police officers receives more media attention and elicits more outrage, such instances leave us vulnerable to the availability heuristic—a cognitive bias that leads us to form judgements about the prevalence of phenomena based on the readiness with which we can recall examples. Had Tony Timpa been black, we would all likely know his name by now. Had George Floyd been white, his name would likely be a footnote, briefly reported in Minneapolis local news and quickly forgotten. In fact, white people are victims of police mistreatment “all the time” too. And just as the Timpa case tragically parallels the Floyd one, there are countless episodes paralleling those we hear about involving black people.

Of course these are just parallels and don’t answer the question we want to know: are black people more likely to be murdered by cops on a per capita basis, in a given set of encounters, with controls from white suspects in similar situations, with all other things roughly equal? If that’s the case, then racism is implicated. Anecdotes like those above won’t answer that question.

But the point McWhorter is making is that there are other causes for higher per capita rates of blacks being shot by police, and we have to work out why this is the case. He mentions some alternatives (I’ve bolded the crux of his thesis).

The socioeconomic gap between blacks and whites is doubtless an important contributing factor. Police are called to poor neighborhoods more often, so poverty makes someone more likely to encounter law enforcement. From the 1970s through the 1990s, many conservatives argued that too many black people were on welfare. Liberals and progressives replied that, firstly, more white people were on welfare and that, secondly and more importantly, a greater proportion of the black population is on welfare because a greater proportion of black people are mired in poverty. In this context, former Washington Post journalist Wesley Lowery observed that black people are about two-and-a-half times more likely to be killed by cops than their representation in the population would predict. Today, the percentage of black people living in poverty is about two-and-a-half times that of whites (22 percent and nine percent, respectively, in 2018).

This disparity in poverty rates means black people are also disproportionately represented in rates of violent crime. Poverty can lead to dangerous survival choices that include lucrative criminal activity. Furthermore, outstanding warrants can cause suspects to flee law enforcement when stopped for other trivial infractions. This disparity cannot explain every fatal police shooting, including some of the most notorious examples, such as the shootings of Tamir Rice and Philando Castile. Nevertheless, the tragedy remains: Higher aggregate crime rates lead to more encounters with police officers overall which increases the likelihood that a proportion of those encounters will get out of hand. Entrenched socioeconomic disparities should concern us all, and are as intolerable as cop murders. But the idea that the police murder out of racist animus is much less clear than we are often led to suppose.

This is not to say that McWhorter thinks that no cops are racists, or that there isn’t a systematic form of racism among some police departments. He notes, for example, that blacks are disproportionately pulled over by cops for drug searches, and that must be due to race since the disparity with whites disappears after dusk when race is harder to identify. Further, blacks are more likely than whites to be handcuffed, put up against a wall, or confronted with drawn weapons.  If one can indeed show that the same disparity holds for murder with the appropriate controls, then, Houston (and Atlanta and Minneapolis), we have a problem.

Police officers are too often overarmed, undertrained, and low on empathy. Some police officers are surely racist and act like it. But it does not follow that white cops routinely kill black people in tense situations out of racist animus. This scenario may seem plausible—I believed it until only a few years ago. But there are times when facts are counterintuitive, and it is important to get the facts right and to analyze them with clear eyes and a clear mind (the enlightening work of criminologist and ex-cop Peter Moskos is helpful in this regard). Rhetoric has a way of straying from reality, and to get where we all want to go, it is reality that we must address.

McWhorter’s message is that we shouldn’t rush to judgment about racist killer cops. It may be too late: the claim is largely taken for granted by many. But McWhorter can get away with saying this only because he’s black, and thus can’t be called a racist (I suspect he’s already suffered that, though). That only African-American can argue this way without opprobrium is, as they, problematic.  To paraphrase Dr. King, the validity of an argument should not depend on the pigmentation of the person who makes it.

172 thoughts on “McWhorter on police violence”