My criticisms of wokeness do not extend to the constant slights that black people in America face throughout their lives, even when they’ve “made it” by having achieved what our country considers the American Dream (AD). The fact is that white people like me don’t know what it’s like to be fearful each time you encounter a police officer, or to be patronized in a variety of ways by well-meaning but non-introspective Wokesters.

And here’s one black man, Walter Kitundu, who was successful by AD standards, and discovered a love of birds when young, turning him into a inveterate birdwatcher.  But while exercising his hobby, he was so beleaguered by suspicious people—many of whom called the cops—that he had to post signs to explain himself. The article and attendant documents were published in a Washington Post article yesterday; you can see it by clicking on the screenshot below

Kitundu, a musician, has an impeccable resume, including a MacArthur “genius” award (he’s only 46), a performance in Carnegie Hall, and a Wikipedia entry that shows one of the several musical instruments he invented, the phonoharp. Wikipedia describes it like this:

Kitundu is inventor of the “phonoharp“, a stringed instrument incorporating a phonograph. After hearing the instrument, the Kronos Quartet hired Kitundu as their “instrument builder in residence”. In addition to a phonoharp he also built a “phonoharp” for each of the quartet’s members. For the song “Tèw semagn hagèré” on their 2009 album Floodplain, he created new instruments inspired by the begena, an Ethiopian 10-string lyre. 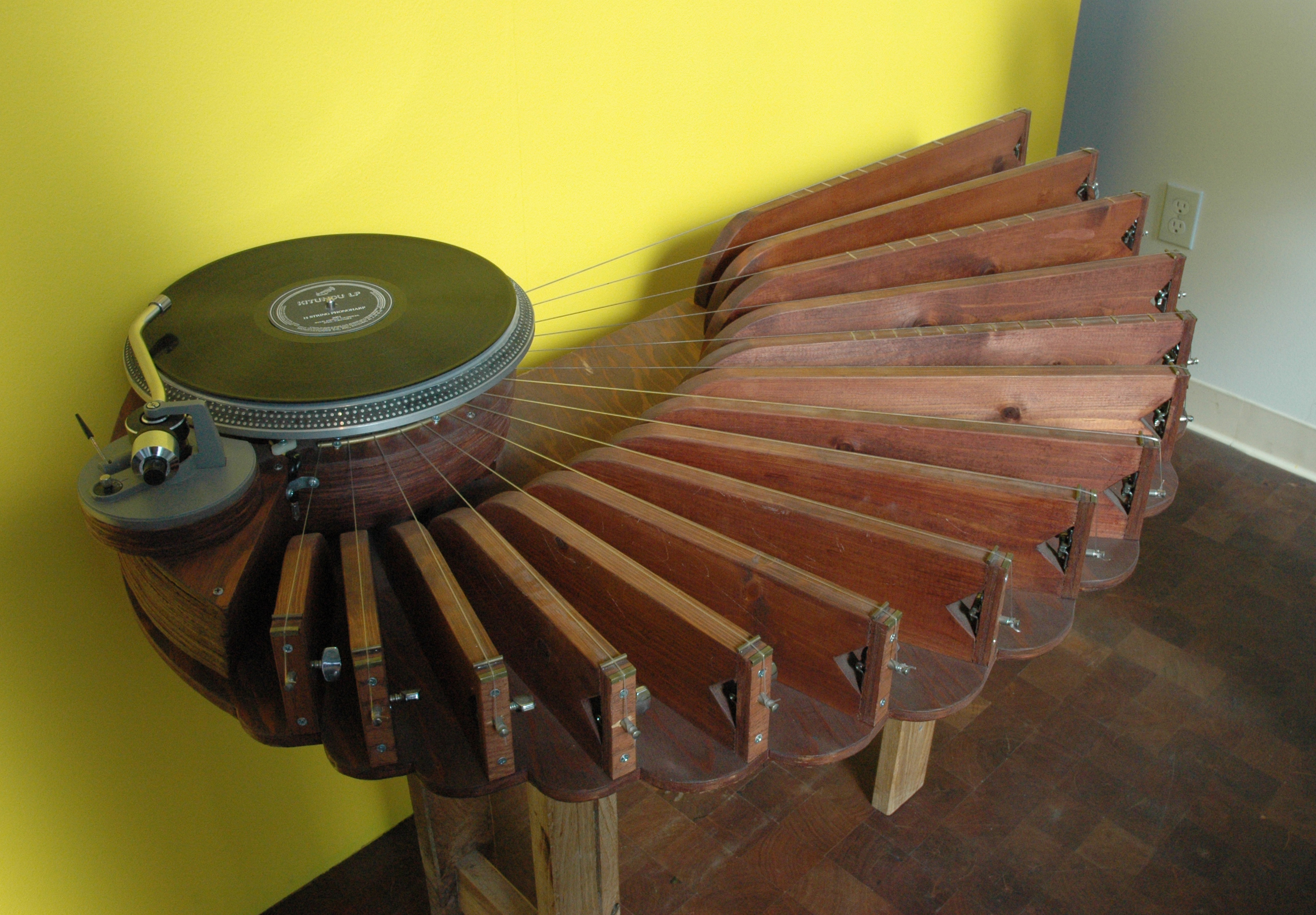 I’m digressing here, but had to show how this combination instrument and vinyl record player works:

Kitundu has been birding since he was 6 or 7, and is interviewed in the article.  He recounts his hazardous birding experiences—hazardous because white folks were suspicious of him:

Q: In 2005, you spent a lot of time following a single hawk, which you named Patch, and you tweeted that your recurring presence resulted in more than a few run-ins with the police. So many, you eventually hung up mock public service announcements [PSA] announcing your presence to the communities you bird in. Can you tell me your thought process and making it?

A: I would actually call it a PSA instead of a mock-PSA, because it was necessary. I needed people to know, in terms of trying to secure my safety as I photographed the birds. I think as a black person, as a person of color in this country, every time you walk out the door, there’s always calculus running in the background about how to present, how to keep yourself safe. It’s a muscle that’s well exercised by people of color in this country. I can’t really think of anything more wholesome than standing under a tree and watching a hummingbird build her nest, but I think if our activities fall outside of the framework of possibility that’s established for us by the white imagination, then we’re at risk.

I didn’t have dog. I didn’t have a partner. I didn’t have a stroller. I didn’t really fit into the generalized idea of who the park was for. And I was black in an affluent neighborhood. And I was being still for long periods of time. I feel like the white people in the park who called the police were owners of limited imaginations that were stunted by racism. Because I think if I had been a white person in the park with my camera, I would have been given credit that I knew something that they didn’t or I must have had a good reason for being there.

I got pulled over by the police from a hummingbird bush once. I got stopped by police on two other occasions walking through the park. And then one person had the audacity to call the police on me within earshot. I could hear him describing me to the police, and I turned around and I said to him, “Can I help you?” And he said, “The police will take care of you.” So after that incident, that’s when I went home and made that sign.

Here’s the sign, which is both funny and sad:

A Redtail landed right next to me, 4 ft away, unafraid, and ate a caterpillar. I was hooked. Documented it’s transition to adulthood. Watched it avoid hazards while avoiding my own. The police were called on me so many times I made this sign. #BlackBirdersWeek #BirdingWhileBlack pic.twitter.com/xYe7UyjlOU 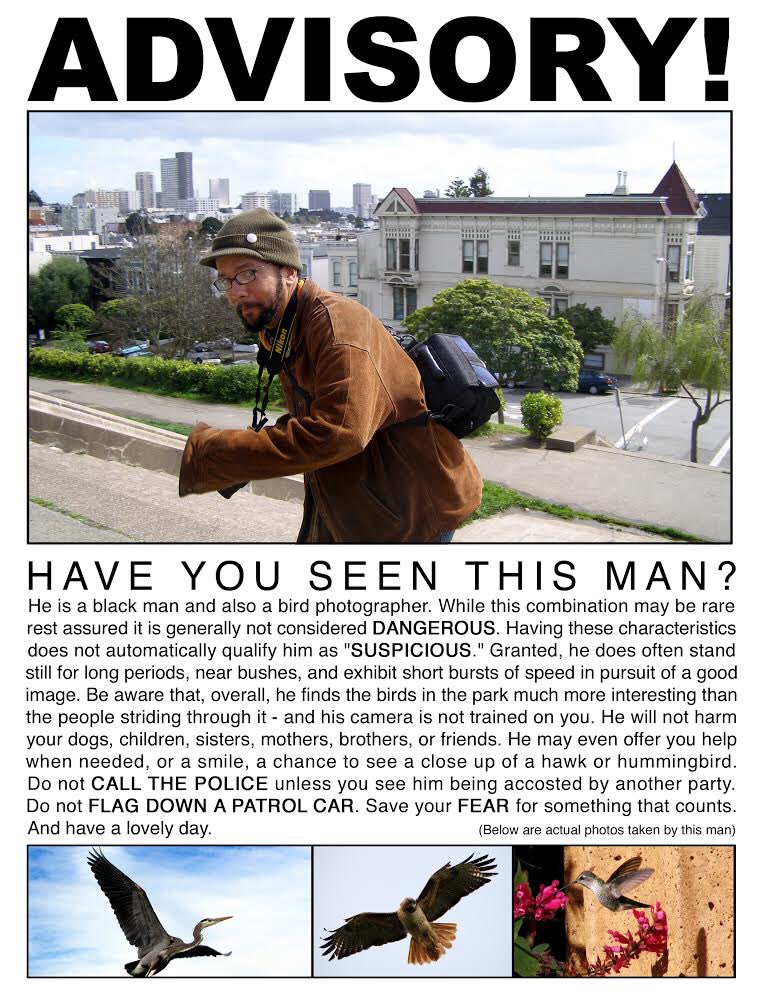 But it kept happening even with the signs:

It felt much better in the park for a couple of months. And then, after the hawk moved around during migration season and returned the following spring, I returned to the park and the same attitudes and tensions were present.

I would never try to insinuate that people of color should have to announce themselves or justify their presence in any way. Like I said, this is one of the most wholesome things you can do — to step outside and look at nature and to be a part of it and walk through it. And to have that be suspect, I think it’s just like I said, it’s a failure of imagination. And it’s basically racism.

That’s for sure! To call the cops on someone watching birds just because they’re black? What else could that be but racism? Kitundu also has a special license plate for his car to dispel people’s fear:

Preventative measures. #birdingwhileblack means taking precautions. In remote areas, and in the city, pulling over to document a bird raises eyebrows, and raises suspicions if you’re black. Thankfully my car could vouch for me when the disbelievers approached. #blackbirdersweek pic.twitter.com/ACwLycAEeh

The article discusses Black Birders Week, and Kitundu finishes by mourning the loss to society of people who don’t get equal opportunity because of the same attitudes that get the cops called on them while doing things that wouldn’t cause any suspicion of they were white.  He has a few things to say about “outreach” as well:

A lot of organizations and institutions talk about outreach and trying to figure out how to increase their numbers and get more people [of color] interested. It really isn’t about that. It’s about addressing the nature of those organizations, not bringing people into a space that is still riddled with the same issues and toxicity. You have to change the space. Because otherwise you’re inviting people to contend with all of those issues.

And if you think about all the people that were pushed out of academia or never entered these fields, because of these pressures. … It is a great loss. A loss to the fields. A loss to those institutions and to the world. We won’t know the knowledge and perspectives that could have shaped the future of those institutions and the people who might now be in positions of leadership if not for the legacy and tenacity of racism in this country. I’m hopeful that if the awakenings people have been claiming to have, due to both Black Birders Week and the larger cultural moment, are sustained, and acted upon, we could see meaningful cultural and structural change.

The point I’m making is not that Kitundu is a special case because he’s successful in his career. That success shouldn’t matter. What does matter as he goes about his hobby is his pigmentation, and in that he’s just as liable to get the cops called on him as anybody else who’s black and watching birds.  This is happening over and over again (viz. Amy Cooper, who called the cops on another black birdwatcher in Central Park). It’s time it stopped, and we can all do our part.

Some African-Americans object to white people saying, “I don’t see color,” which they conceive of as patronizing or itself racist. But surely we should not see color—or at least we should ignore it—under any normal-life doings save those involving dialogue about race.  And we should surely not see the color of birdwatchers.

55 thoughts on “Birding while black”