After the stress of the last couple of days, culminating with me immersing myself in the pond and netting 7 ducklings whose fate otherwise was to die at the wings of Honey and her brood (they’re all fine now and being raised at a wildlife rescue facility), I deserve a break. And indeed, the last two days the pond has been calm, with little inter-duck fighting. I can feed them, watch their postprandial play, zooming, and diving, and simply chill nearby while the mallards nap, like this: 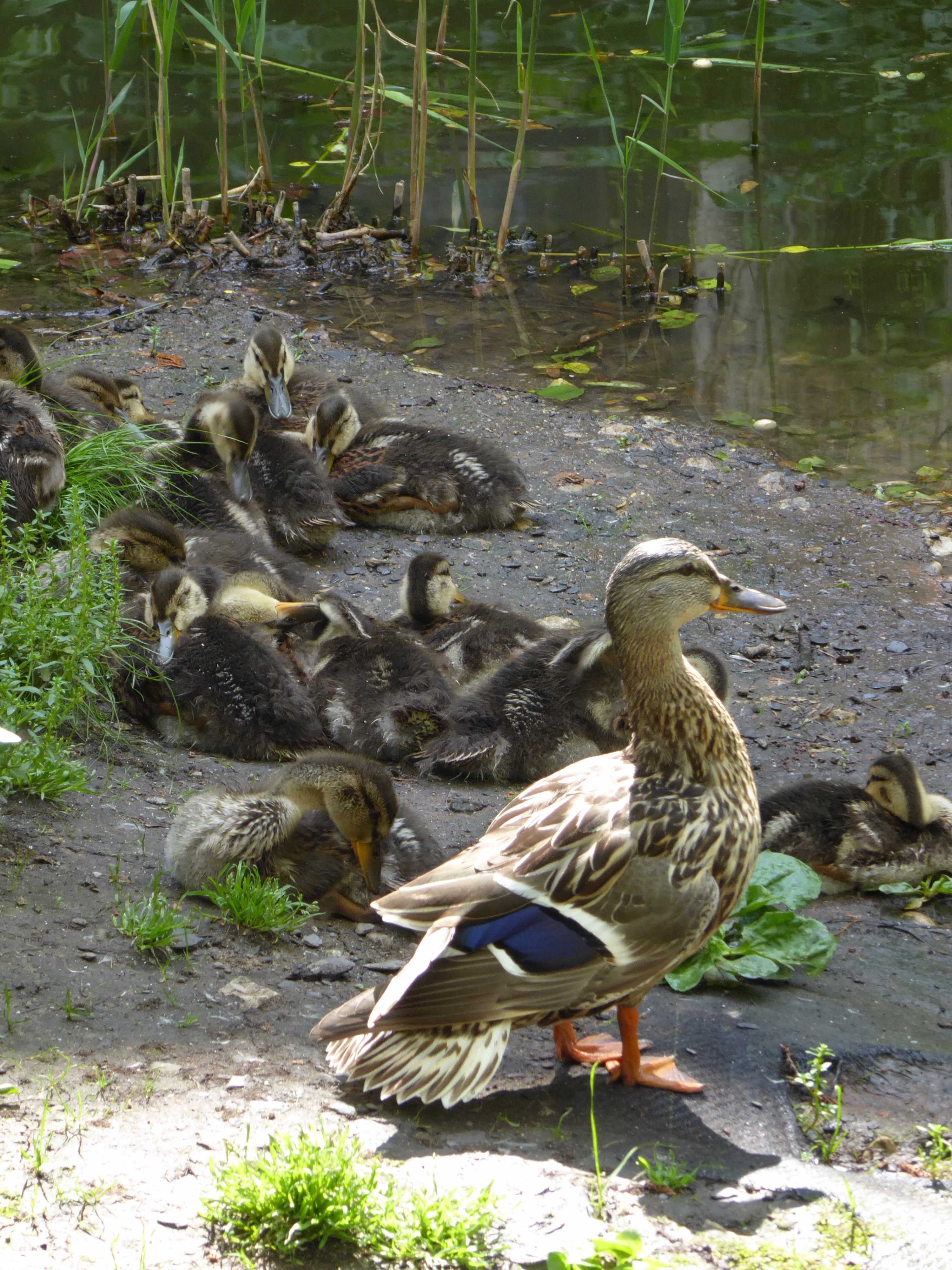 After one month, they’re teenagers (they fly at two months), with the adult plumage coming in, starting at the neck and the tail and meeting at the middle. Their stubby wings are already feathered. 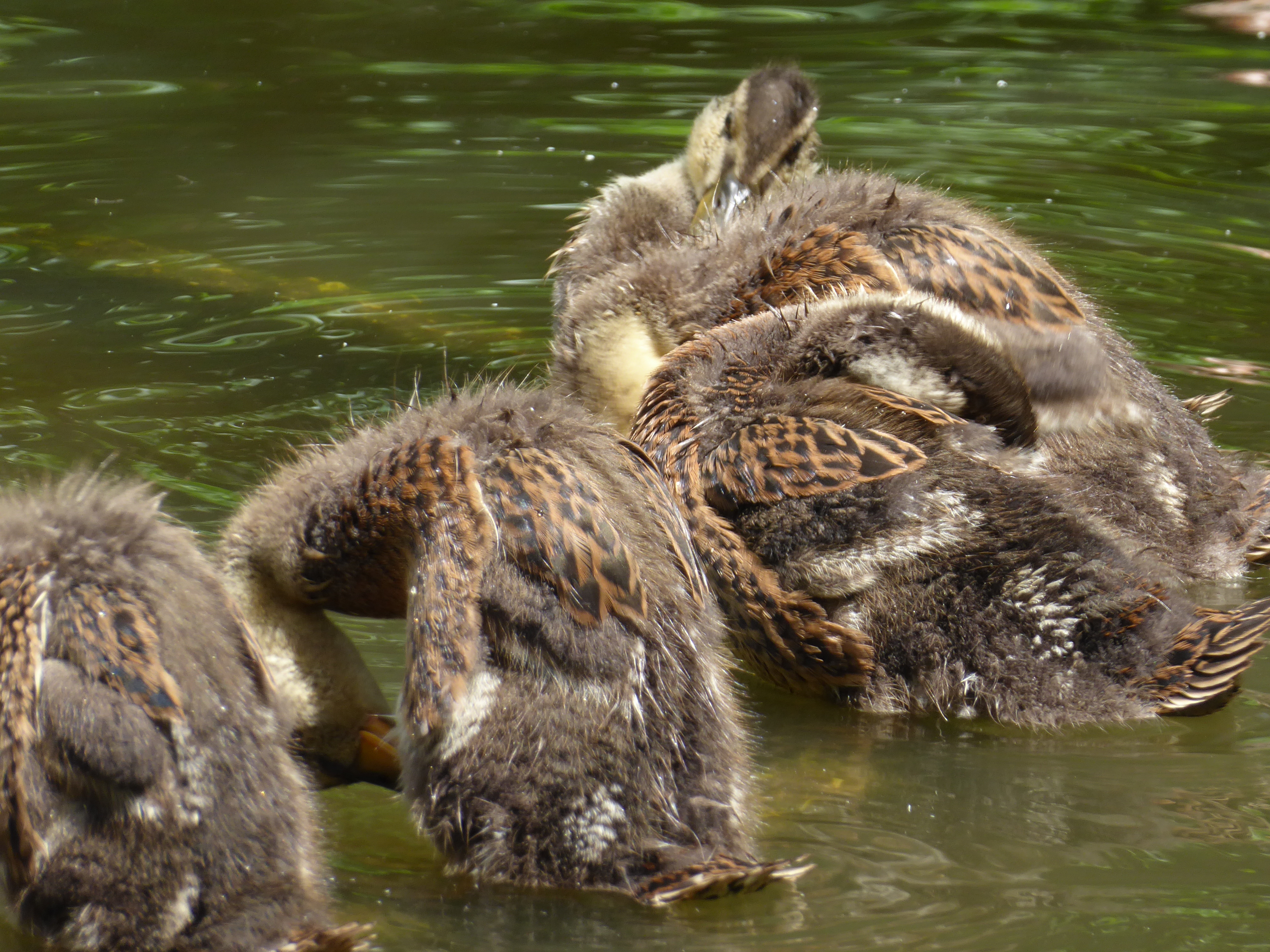 . . . and they act like adult ducks, having learned from Honey to groom, dabble, and preen. Here’s a video of the pack doing it on the beach.

They’re much more independent, going all over the land around the pond, though not all of them are yet big enough to jump over the cement rim. (They have other ways of getting up.) Here’s honey watching her theropods, which they always remind me of. Look at that one standing up; it even looks like a penguin. 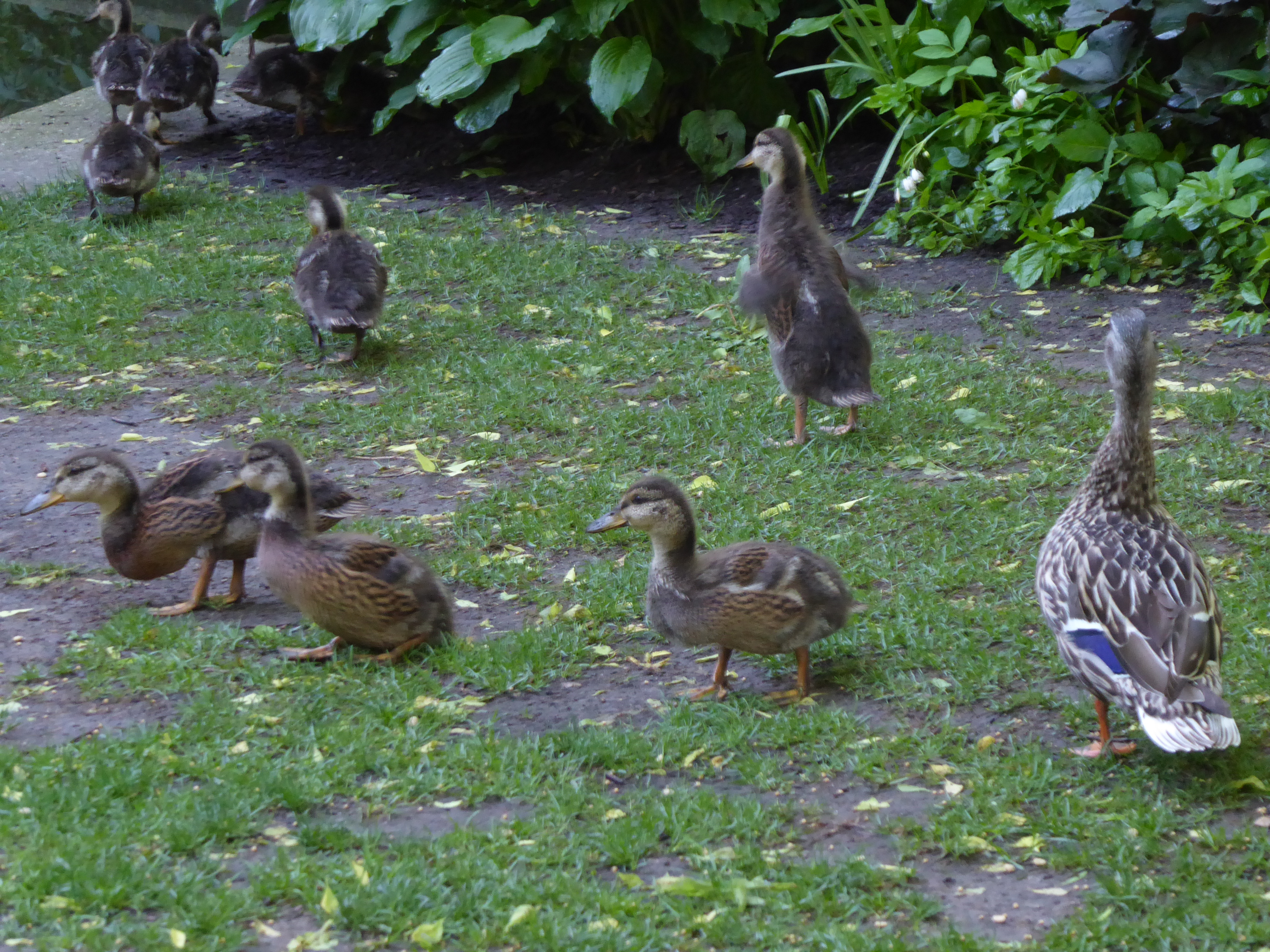 This duckling, which I photographed about a week ago, was sleeping on the cement ring, and I noticed a small claw on what seems to be its wing. It’s circled in the next photo. 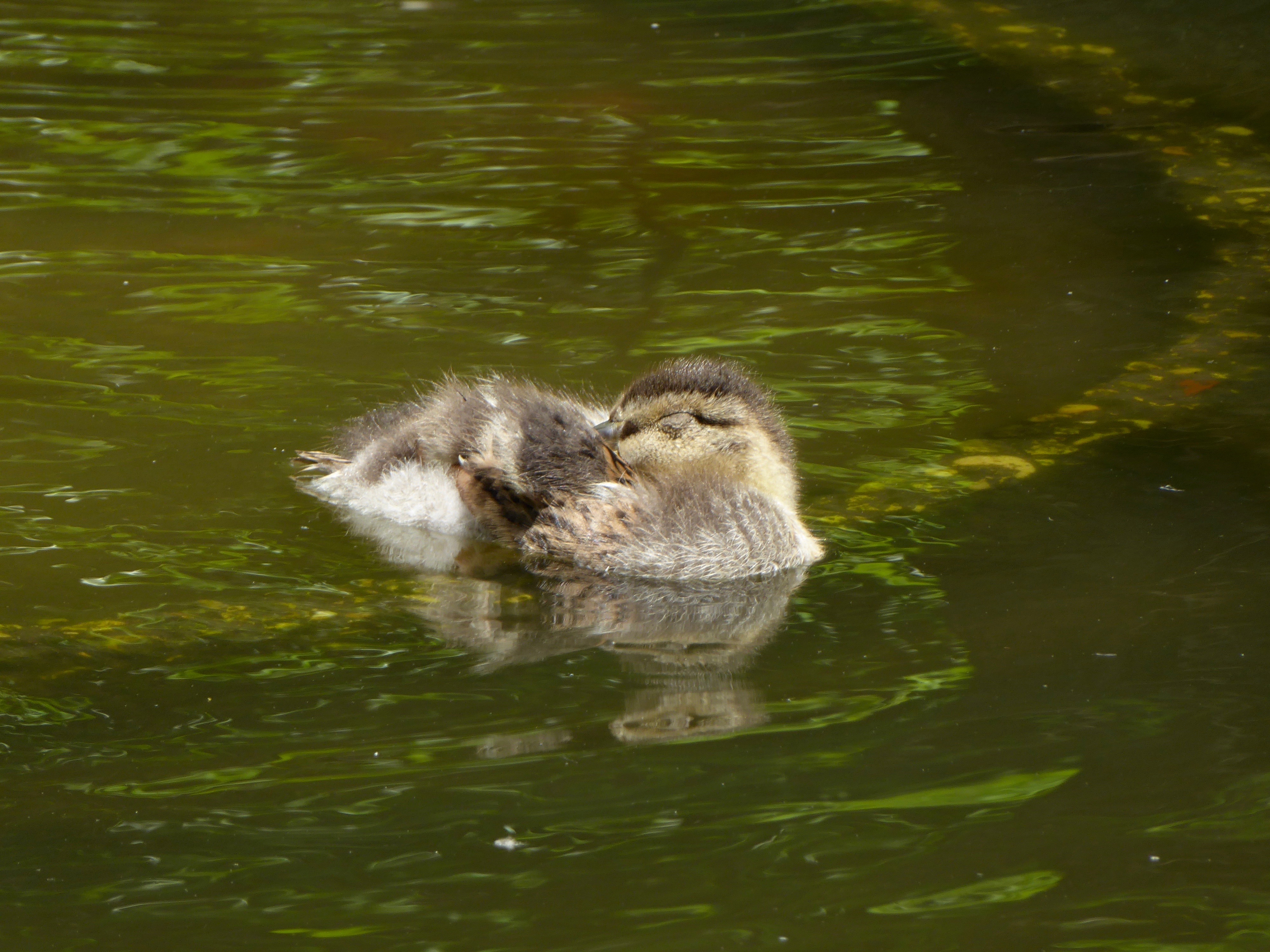 It could be, as I discussed in an earlier post, an atavistic claw on one of the digits that compose the framework of the bird’s wing. (It could also be on the foot, but I doubt it.) See the earlier post for an enlargement. 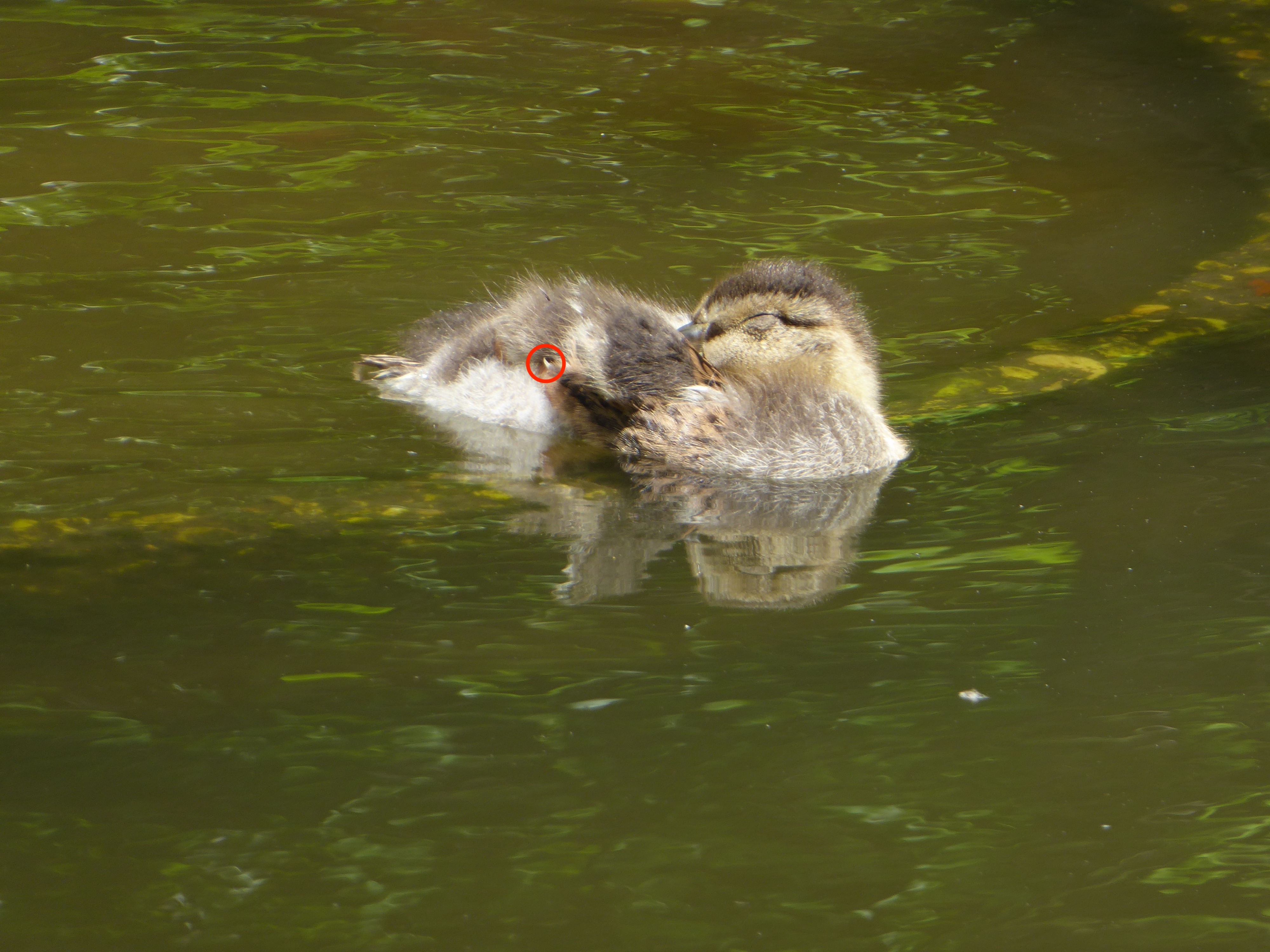 Same baby, but scratching itself with a foot. Here it doesn’t look like it’s on the foot. 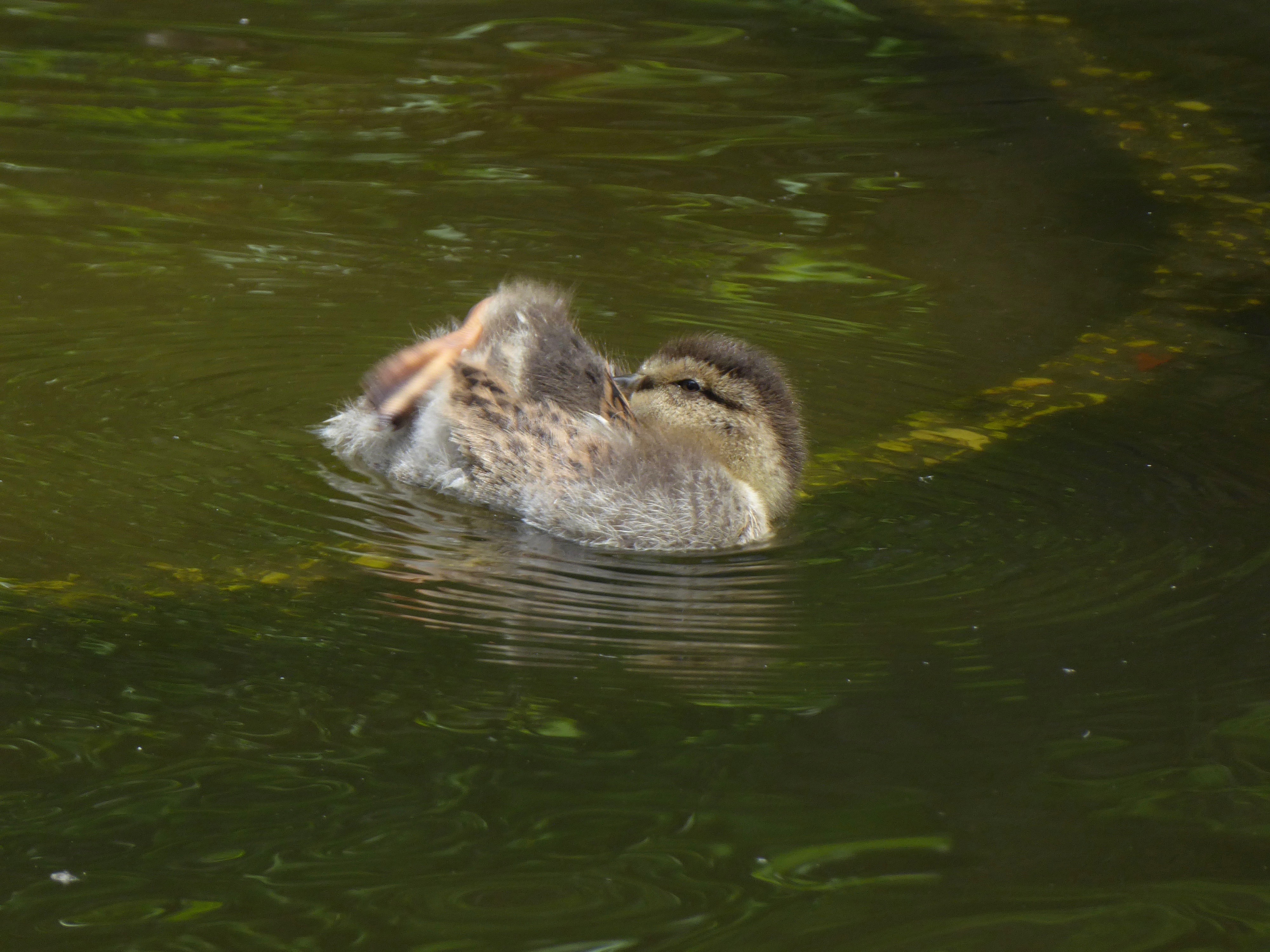 Here’s a video taken by Jean Greenberg, showing some vigorous diving and zooming. I’d sure like to see an underwater shot of their legs as they zoom: those feet must be paddling as fast as a fan blade!

Although it’s getting warmer, they’re still social birds and prefer to be bunched up at all times. Honey, of course, stands guard, sleeping with one eye closed. The turtles provide protective armor nearby. 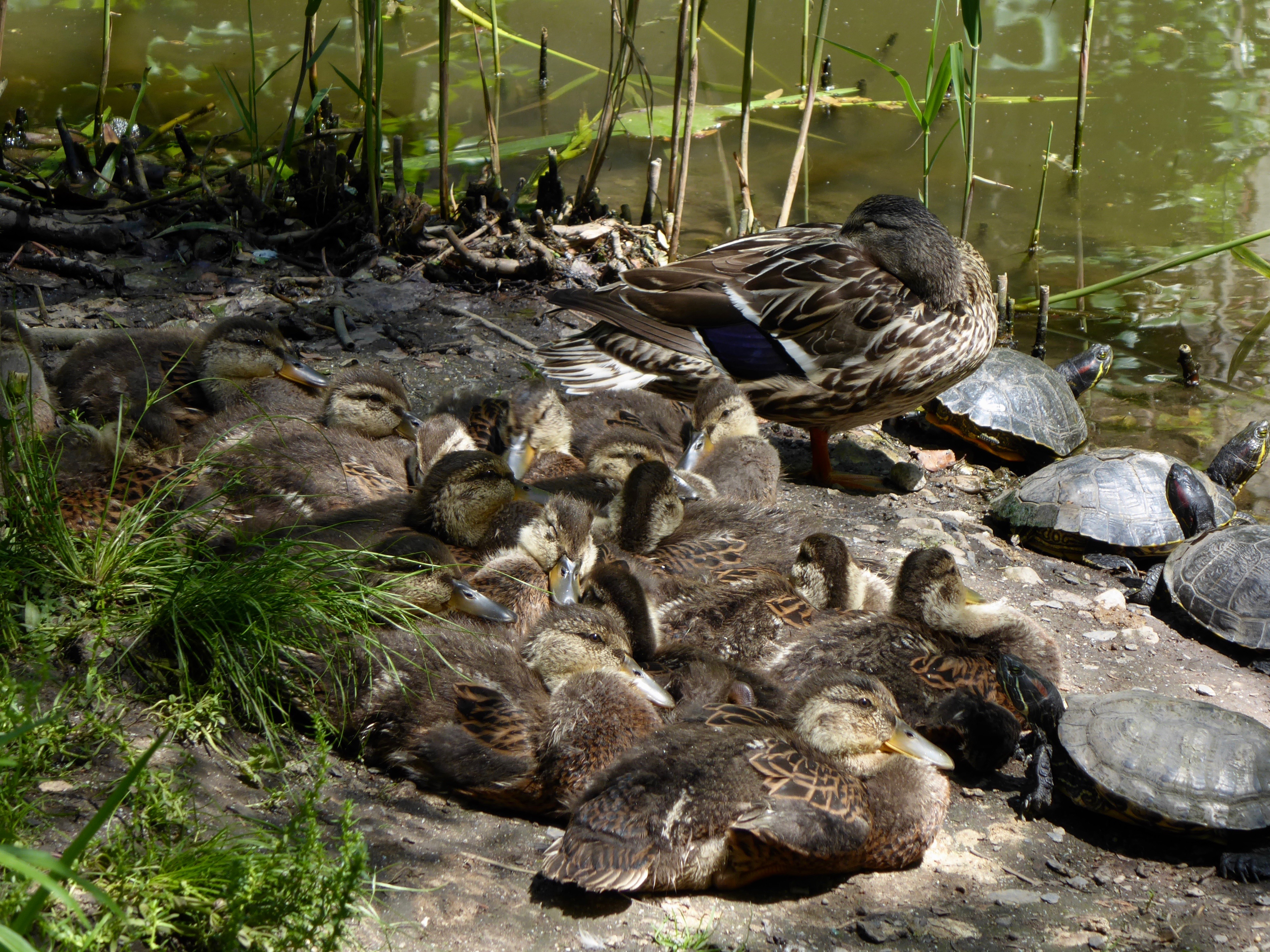 I love it when they stick their little oversized feet out to cool themselves. 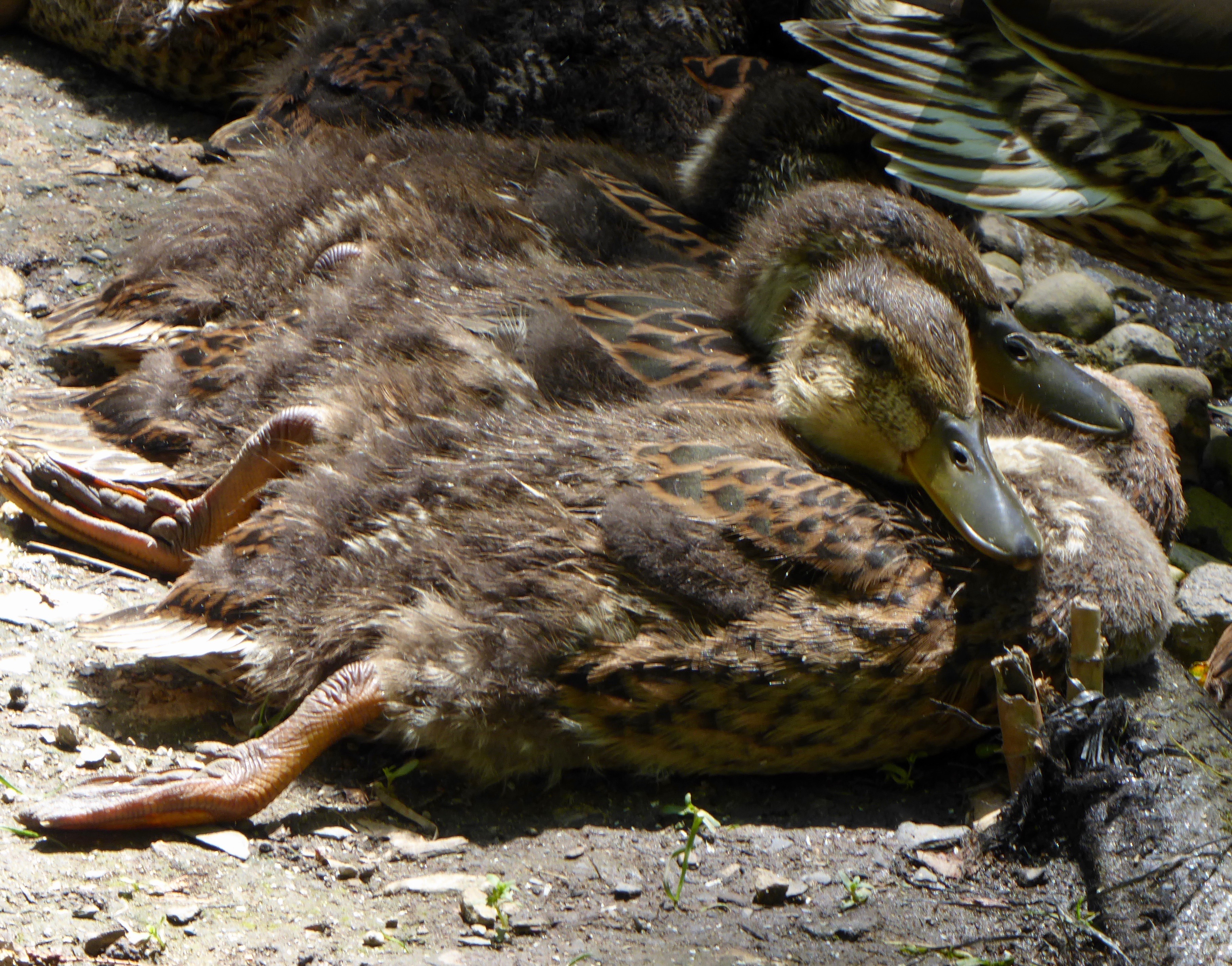 A pile of sleeping ducklings. 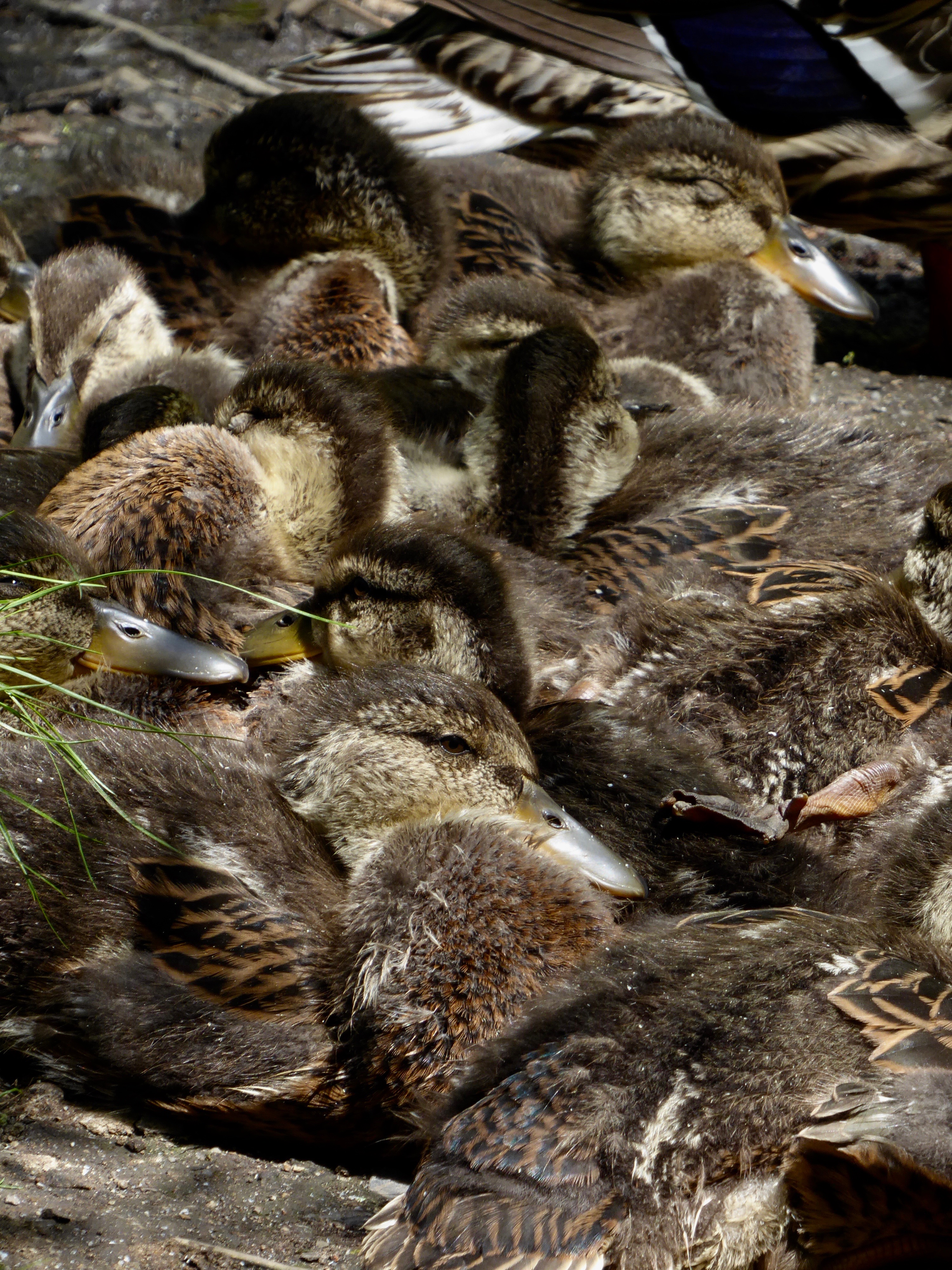 Another video by Jean Greenberg showing the Contagious Zoomies, started by one enterprising duckling. It’s play but also practice for the flying takeoff as well as predator avoidance.

Also from Jean: this is the one remaining duckling that I nabbed and, with the help of reader Karen, got to the rehabber.  It was joined to its six brothers and sisters rescued the previous evening and has been taken to Willowbrook for rearing and rehab. The aim of the rehabbers is to release them to live out their lives as wild mallards.

I can’t get enough photos of the Duckling Pile: 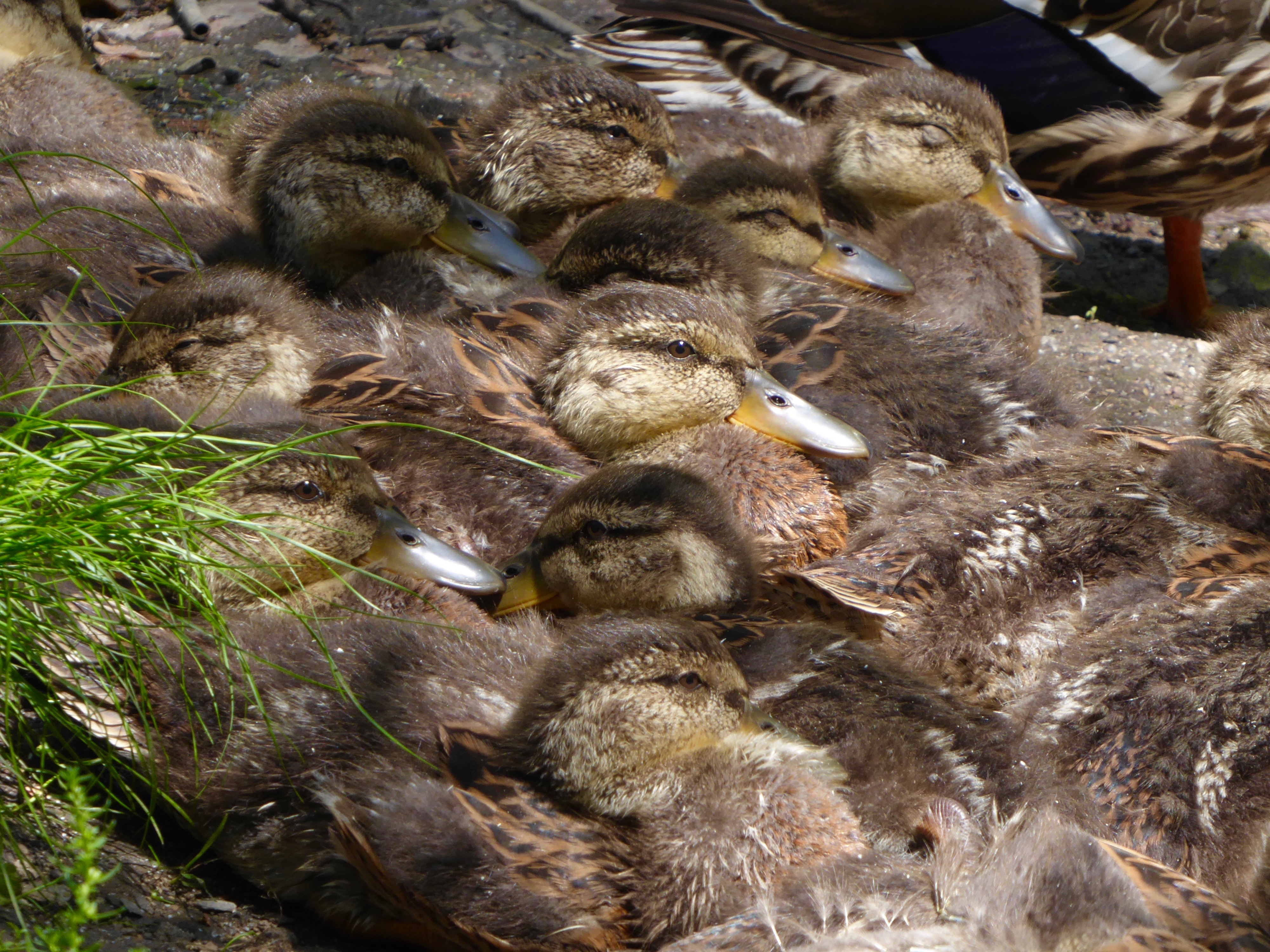 Dorothy still hangs around the pond, but I’m not sure whether she’s nesting or not. If I were a believer, I’d pray that she’s not raising another brood to replace the one purloined by Honey. Here she is on one of her pond visits hanging with Wingman, who still courts both Honey and Dorothy. Note that Wingman is vocalizing. 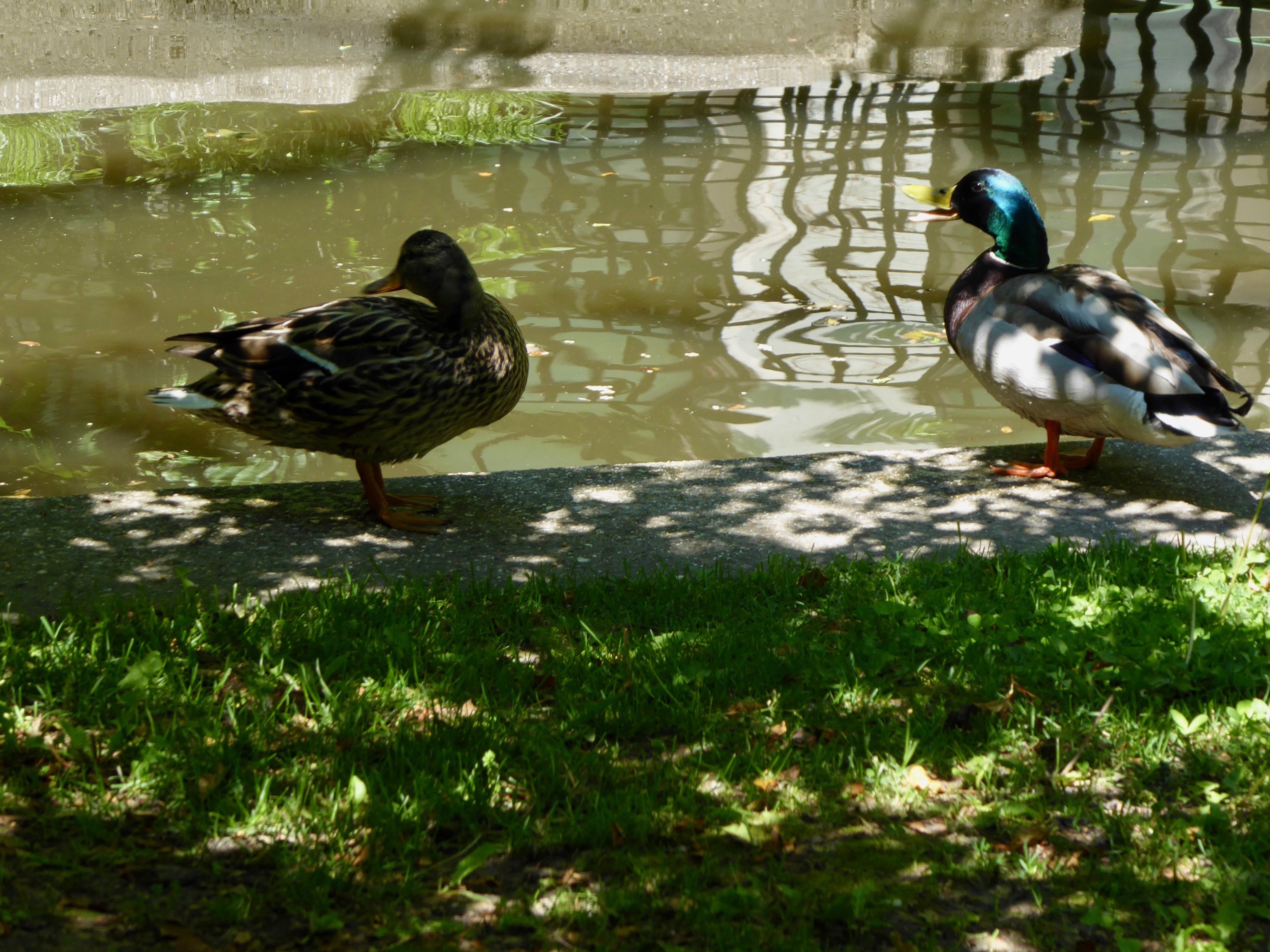 Finally, an artsy shot of a leafy tree reflected in the pond. 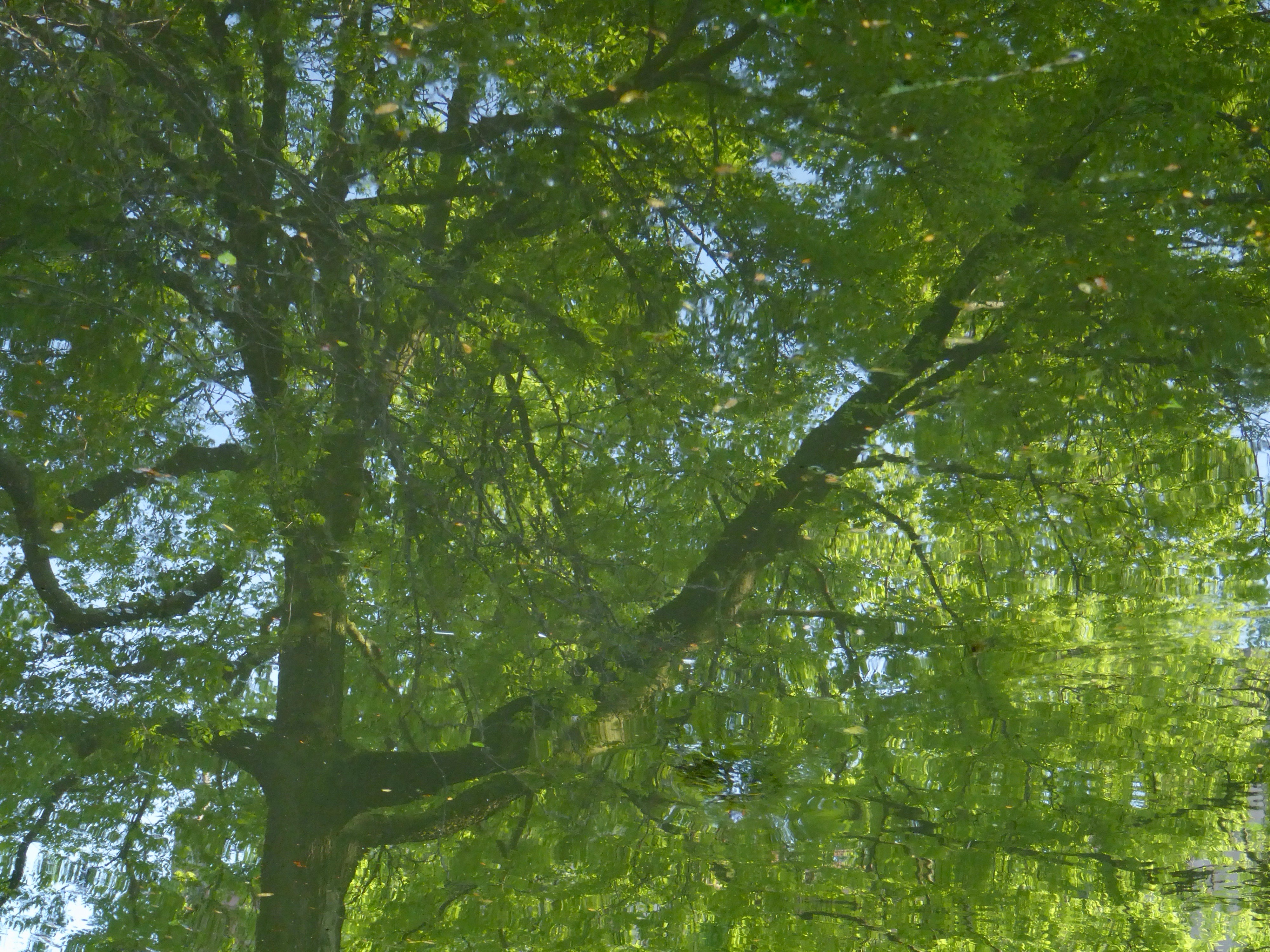