When I first read the publicity about this recent (2017) paper in Proc. Nat. Acad. Sci., I thought that the authors had come up with a new solution to how the fungus Ophiocoryceps unilateralis, a parasite on carpenter ants, turns the ant into a zombie, behaving in a way that facilitates the dispersal of the fungus.

People are fascinated with this system because of the “zombie” connection, and because of the fact that a fungus (considered a “lower” species) can control the behavior of the ant. In this this case the fungus somehow causes the infected ant to climb onto vegetation, bite into it hard, and then die with its body extending out, allowing dispersal of the fungal spores into the air from a stalk that grows out of the ant’s corpse. The spores then disperse, and can fall on another ant so that the fungus begins it life cycle anew. Here’s the life cycle from MicrobeWiki: 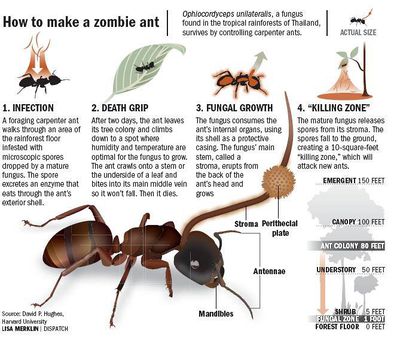 And a photo of a dead and with the fungus sprouting from its body. Note how the ant has bitten into the vegetation to secure itself: a true death grip!

There are other examples of microbes or fungi controlling the behavior of their host in such a way to facilitate their own spread at the expense of the host’s life. A recently famous one involves the discovery that the protozoan parasite Toxoplasma gondii appears to change the behavior of rodents—its intermediate host—making them lose their fear of cats. The rodents are then devoured more easily by cats, who then shed the eggs in their feces, infecting more rodents who come into contact with the feces. Here’s that life cycle (it has several life stages) from Wikipedia: 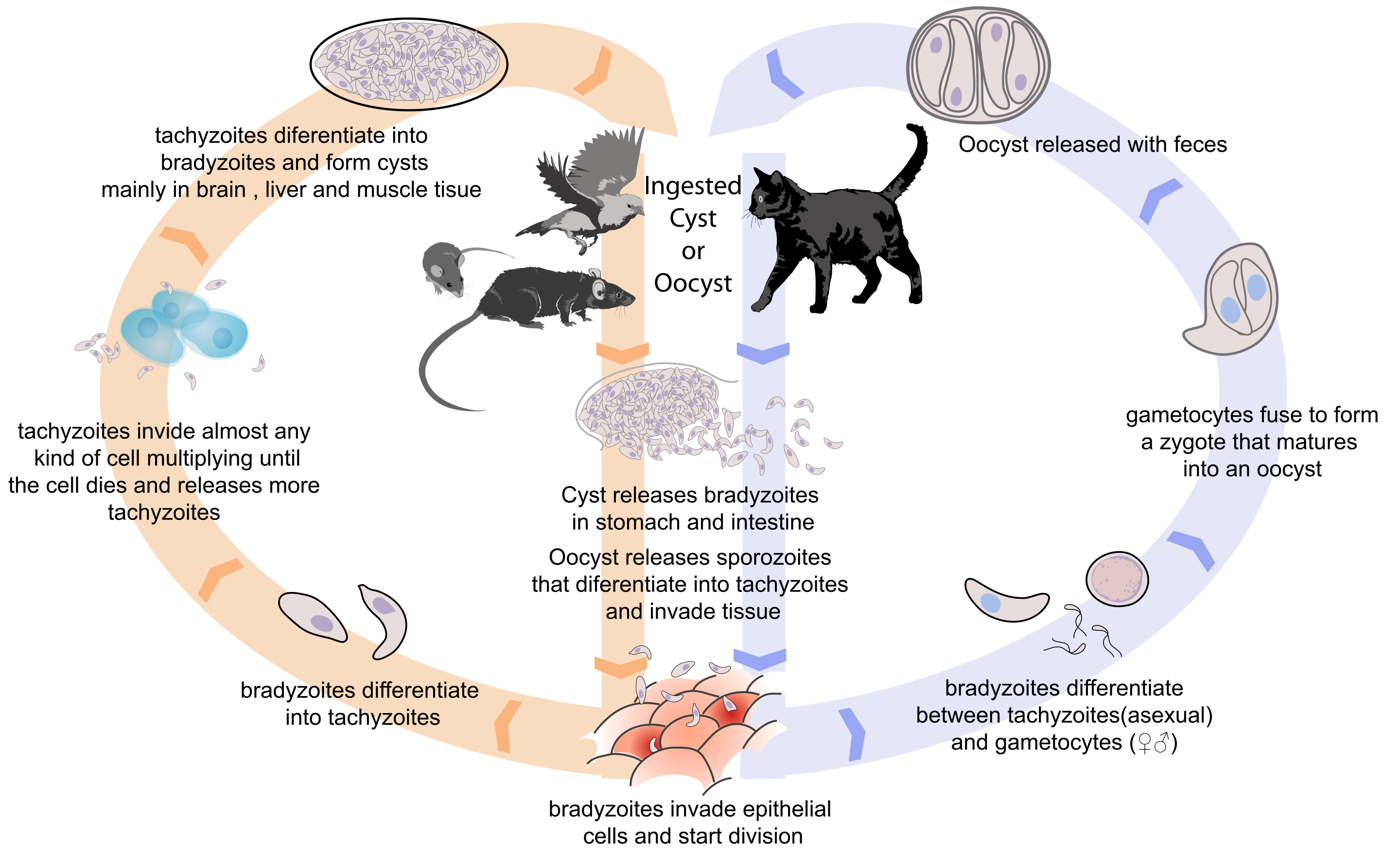 Parasites manipulating the behavior of their hosts to facilitate the spread—and, of course, the spread of the genes producing that host-altering behavior—is what Richard Dawkins calls an “extended phenotype”, with the new behavior being considered a trait of the parasite that produced it. However the parasites do this, it’s a marvel of evolution—a sophisticated “behavior” of simple organisms that arose via natural selection.

Up till when this paper was published, it’s always been thought that in the case of ants and “zombie-producing” fungi, the fungus invaded the host’s brain, changing its behavior in an adaptive way for the fungus (note Attenborough’s “explanation” in the video). Now, however, the 2017 paper by Maridel Fredericksen et al. shows that the fungus invades not the brain, but muscles in every part of the body (click on screenshot below, the pdf is here, and the reference and link at the bottom). In fact, most of us missed that paper, and continued to say in the last three years that the fungus turns the ant into a zombie by invading the ant’s brain.

That excited me at first, because I thought that the fungus was somehow manipulating the actual movement of the ant’s muscles, including that crucial clamping of the mandibles on the plant. But that doesn’t seem to be the case. The invasion of muscles may provide nutrients for the parasite, but is not yet seen as a way to control the ant’s behavior. What’s new, then, is that while we still don’t know how the “zombie” behavior arises, we know it doesn’t involve fungal invasion of the brain.

The advantage of this system is that the fungus and ant can both be cultured in the lab and so experiments can be done.  The authors did sophisticated experiments involving infecting the carpenter ant Camponotus castaneus with the fungus, and also with a “control” fungus Beauveria bassiana, a general pathogen which doesn’t change ant behavior.

They infected ants with both fungi, and traced where the infection went with a combination of staining, producing serial sections of three parts of the ants’ bodies, staining the sections, training the microscope through “deep learning” AI to distinguish ant tissue from fungal tissue, and painstakingly putting together the sections.

In short, they found fungal tissue throughout the ant’s body, but not in the brain, even though the ants behaved as zombies. This shows that brain infection by fungal hyphae (the branching filaments that the fungus produces) is not responsible for changing the ant’s behavior.

What they did find is that in most ants the different fungal filaments connect up together to form a network, and that that network often encircles the ant’s muscles and sometimes invades them.  Here’s a photo showing the hyphae joining up; the caption is from the paper. “B” shows the cross section of hyphae forming connections with each other:

This is a cross section, but when you put lots of cross-sections together, you can reconstruct the 3-dimensional structure of the fungal network, as in this figure (again, caption from the paper)

The fungus not only surrounded the muscles, but in some cases penetrated the muscle fibers themselves, perhaps, the authors posit, to obtain nutrients (the generalist fungus occasionally did this, too). There is no indication that this connection of the fungal hyphae with the muscles affects how the ant behaves.

So what we have is not an answer to the question of how the zombie fungus works its magic, but how it doesn’t—through the brain. But that doesn’t mean that the behavior isn’t mediated through the brain, for the fungus could still secrete some kind of molecule that interacts with the brain and doesn’t require the fungus to enter the brain. There’s still a lot left to learn. But we shouldn’t doubt that the manipulation of ant behavior really is an evolved “extended phenotype” of the fungus.