Reader Frank sent me a copy of this article, which, being in the Wall Street Journal, is paywalled (judicious inquiry might yield you a copy).  Since I’ve become a more vociferous atheist, I tend to notice these things more often, and to me this sounds like a paean to God pitched as a “scientific” analysis of why prayer is good for you. 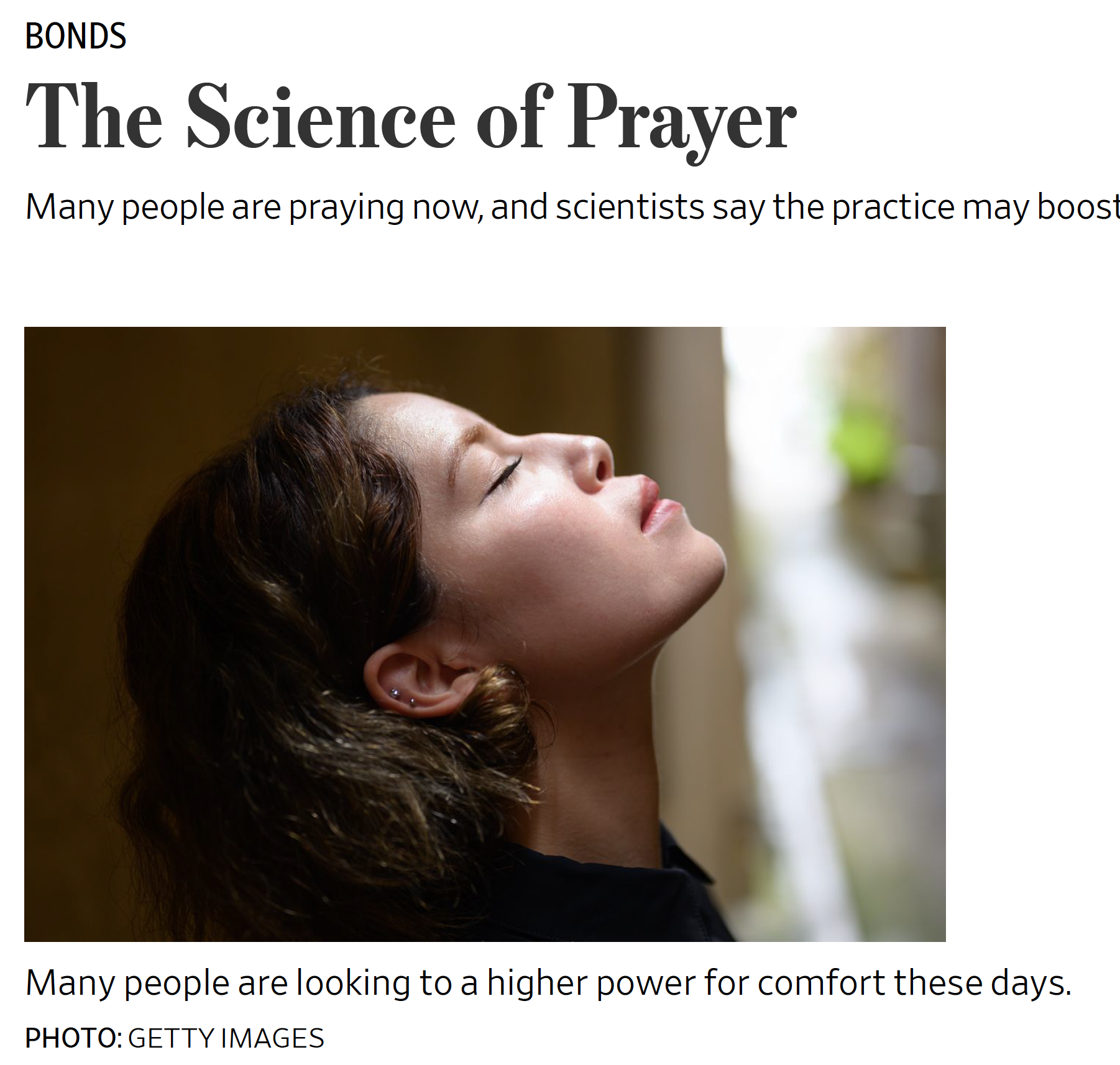 Now I’m perfectly prepared to accept that prayer might have salubrious results. After all, it’s a break from quotidian tasks, can be a form of meditation, and could serve, as it often does, as a conversation with an imaginary friend. As the WSJ admits, however, there’s not a whole lot of “science” to this, only a few studies and some anecdotes:

Scientists have no way to measure the existence of a higher power, of course. And they’ve done little research on any health benefits of prayer, largely because of a lack of funding in the medical community for spiritual research, says David H. Rosmarin, assistant professor of psychology at Harvard Medical School and director of the Spirituality and Mental Health Program at McLean Hospital, in Belmont, Mass.

How would you “measure” the existence of a higher power? Does it have a size? Either there is one or there’s not one, but that’s detected, not measured. And here are three studies:

A 2005 study in the Journal of Behavioral Medicine comparing secular and spiritual forms of meditation found spiritual meditation to be more calming. In secular meditation, you focus on something such as your breath or a nonspiritual word. In spiritual meditation, you focus on a spiritual word or text. Participants were divided into groups, with some being taught how to meditate using words of self-affirmation (“I am love”) and others taught how to meditate with words that described a higher power (“God is love”). They then meditated for 20 minutes a day for four weeks. Researchers found that the group that practiced spiritual meditation showed greater decreases in anxiety and stress and more positive mood. They also tolerated pain almost twice as long when asked to put their hand in an ice water bath.

This is a bit unclear to me: was the “spiritual” meditation all invoking the divine (“God is love”—a deepity if ever there was one)? What is their definition of “spiritual”? Well, I can’t be arsed to read that study, or to find out if the effects were permanent (I doubt it; I wonder if they did just one assessment at the end of the study.) As for the ice water bath, well, that’s not something most of us are prone to encounter.

People pray for many reasons, including for guidance, thanksgiving, solace or protection. But not all prayer is created equal, experts say. A 2004 study on religious coping methods in the Journal of Health Psychology found that people who approach God as a partner, or collaborator, in their life had better mental- and physical-health outcomes, and people who are angry at God —who feel punished or abandoned—or who relinquish responsibility and defer to God for solutions had worse outcomes. It’s similar to the way a loving relationship to a partner brings out the best in you, says Dr. Pargament, the lead researcher on the study.

This says nothing about the efficacy of prayer itself, but about the relative outcomes of “loving” versus “angry-at-God” prayer. Were all the outcomes, good and bad, better than those placebo non-pray-ers or of “secular” prayers? And isn’t there a complication of those people who pray benignly having different personalities from those who are angry at God? Frankly, this description tells me nothing about “the science of prayer.”

Prayer can also help your marriage, according to several studies at Florida State University, in Tallahassee. Researchers there have found that when people pray for the well-being of their spouse when they feel a negative emotion in the marriage, both partners—the one doing the praying and the one being prayed for—report greater relationship satisfaction. “Prayer gives couples a chance to calm down,” says Frank Fincham, eminent scholar in the College of Human Sciences at Florida State University, who conducted the studies. “And it reinforces the idea that you are on the same team.”

Perhaps this is the case, though of course there are secular alternatives, like discussing problems with your spouse in a structured way, or having couples therapy.

At the end, author Elizabeth Bernstein recounts her own episode of prayer, uttered when her father had a heart attack and a stroke, and she prayed with the medical staff for his life to be saved (it was). Now she says the “serenity prayer” (“God grant me the serenity”, etc. etc) over and over again.

I find almost none of this convincing “scientific” evidence for prayer over other forms of meditation—save for the supposedly more favorable (and probably short term) outcome of “spiritual” prayer over “secular” meditation—and yet calling on your imaginary friend may indeed be a good strategy. But what it doesn’t do, and what the Wall Street Journal touts ever so subtly, the suggestion that there’s somebody up there who’s listening. Yes, “scientists have no way to measure the existence of a higher power”, but I claim that the underlying message of this article is that such a power exists. We just can’t “measure” it!

And, if prayer improves your mental health, and praying to numinous beings gives the best results, are we supposed to pray in that manner even if we have no evidence for such beings?