I checked with two friends to ensure that one picture I’m posting today is not too salacious, and was assured that it was fine. It was taken in Salt Creek, near Death Valley, California, on January 12, 1981. The photographer was my colleague and friend Phil Ward, who went with me on a field trip to scout out sites for Drosophila work. (Phil is now a professor of entomology and ant expert at the University of California at Davis.)

January is a good time to collect flies, for the Death Valley region is the hottest place not just in the U.S., but in the world. But winter, especially January through early April, is cool and salubrious for the fly species I worked on: Drosophila pseudoobscura—a famous subject of evolutionary-genetic studies. This species, along with others, breeds in the dates grown in oases in the region, but almost certainly breed elsewhere as well, for you find them in profusion in areas where there are no dates (e.g., piñon pine/juniper forests). I spent several years part-time during my UCDavis postdoc trying to find where D. pseudoobscura breeds in the wild, and failed miserably. (I did find them breeding in garbage cans in urban areas.)

The work in Death Valley was a continuation of work started by my Ph.D. advisor, Dick Lewontin along with Steve Jones, a professor of genetics at University College London. At that time they wanted to see if protein variants (allozyme alleles) were “neutral”: that is, whether the variant forms of a gene that could be distinguished on an electrophoresis gel were equivalent in terms of natural selection. If they were “neutral” with respect to each other, then their frequencies would bounce around subject only to genetic drift: stochastic sampling of genes from one generation to the next. Natural selection could not tell them apart.

Dick and Steve thought that small oases like the Salt Creek Oasis, a few miles outside Death Valley National Monument (now Death Valley National Park), could serve as places to test whether allozyme variants were neutral, as they were thought to be self-contained and harbor resident populations of flies. (It turns out, though, that, due to the heat, Drosophila die out in summer and must repopulate from higher-altitude areas in winter.) If you could release thousands or millions of flies harboring different enzyme variants in different small oases, you might be able to go back repeatedly and see if the frequencies had changed. If they changed in all “replicate” oases in the same direction (i.e., variant 103 always rose to higher frequency at the expense of variant 104), you could conclude that the alleles were not selectively equivalent, and were differentially subject to natural selection.

These releases were done, and never came to anything. (I wouldn’t have done that experiment as natural selection is probably weak and the flies don’t go through more than a few generations before they die of heat in the oases.

However, visiting the area, I realized that one could do a different kind of experiment: release flies that were marked (fluorescent dust, used to make black-light posters, will mark flies nicely, as they clean it all off but leave a few grains on their thorax that can be seen under UV), and then determine if those marked flies could move across the desert. That is, if flies repopulate oases in the winter from cooler areas far away, surely they must be able to fly long distances. We wanted to see how far they could fly.

The picture below was taken when Phil and I were scouting Salt Creek Oasis for a release experiment of that type. (He was also collecting ants: a pismire fanatic, Phil’s never without his collecting equipment.)  The oasis looked propitious: it was a small clump of palms around a small spring, and there were flies there.  After deciding to do a migration study that March, we departed—but not before making our epic ascent of Mount Lewontin.

Mount Lewontin, not an official name but a monicker given by fly workers, is not a mountain at all: it’s a small rocky and dusty hill, probably about 150-200 feet high. As far as I know, though, nobody, at least among the fly workers, had ever climbed it. Since it was so low, one really didn’t need oxygen to ascend it. Rather than climb it without oxygen, then, I decided to climb it without clothes, wearing only my suede Stetson (reserved for field work) and my sneakers: 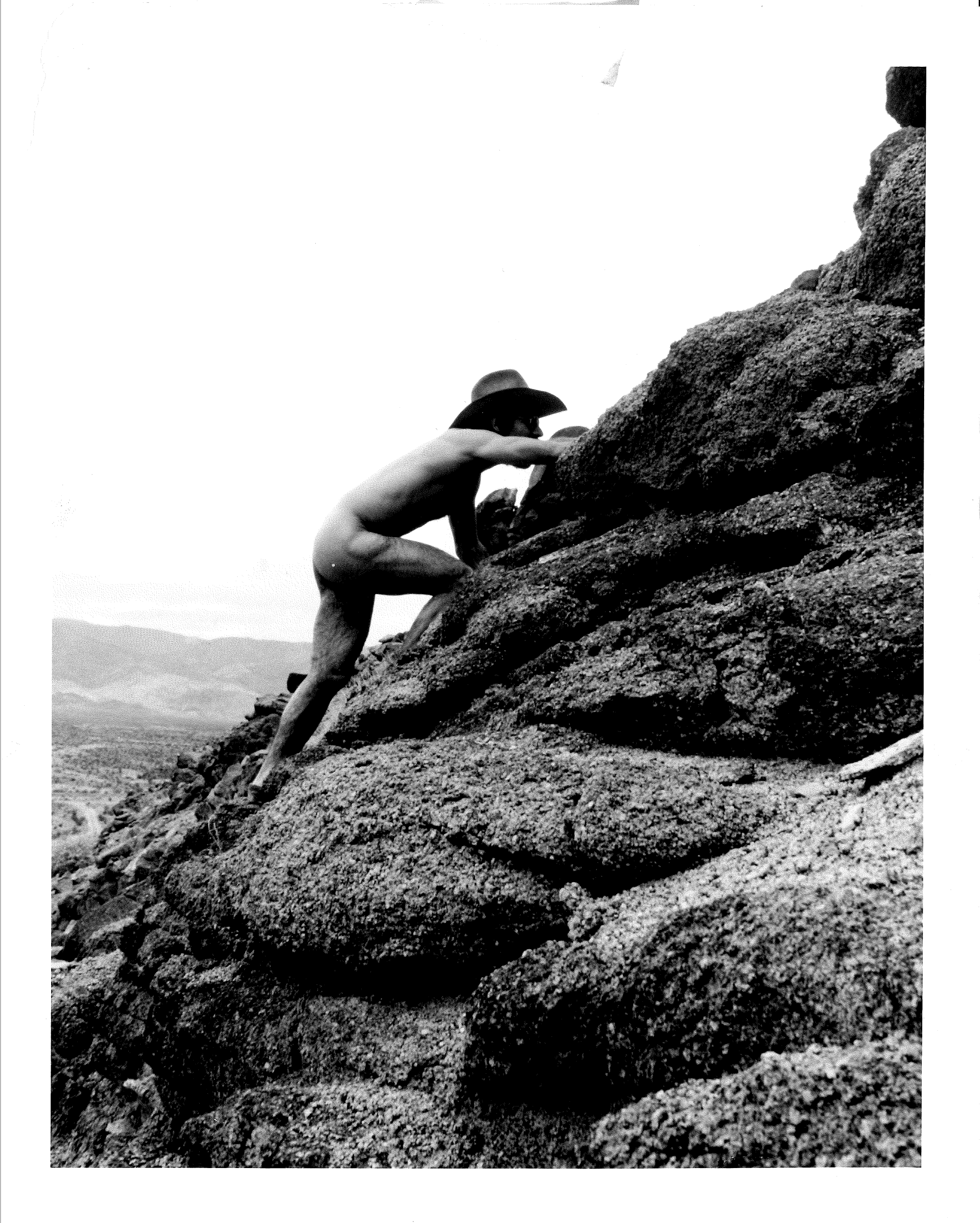 To those miscreants who think I’m making up all these semi-salacious tales (there was one on the last such post), this is proof that you’re wrong. (What, though, is that muscle in my upper thigh?)

Also, I gave Dick Lewontin an autographed copy of the photo after it was developed, and it hung on his office wall until he retired. Here it is with my faded handwriting clarified with a label:

“To my friend and teacher Dick Lewontin, who always climbed upward toward the naked truth.” 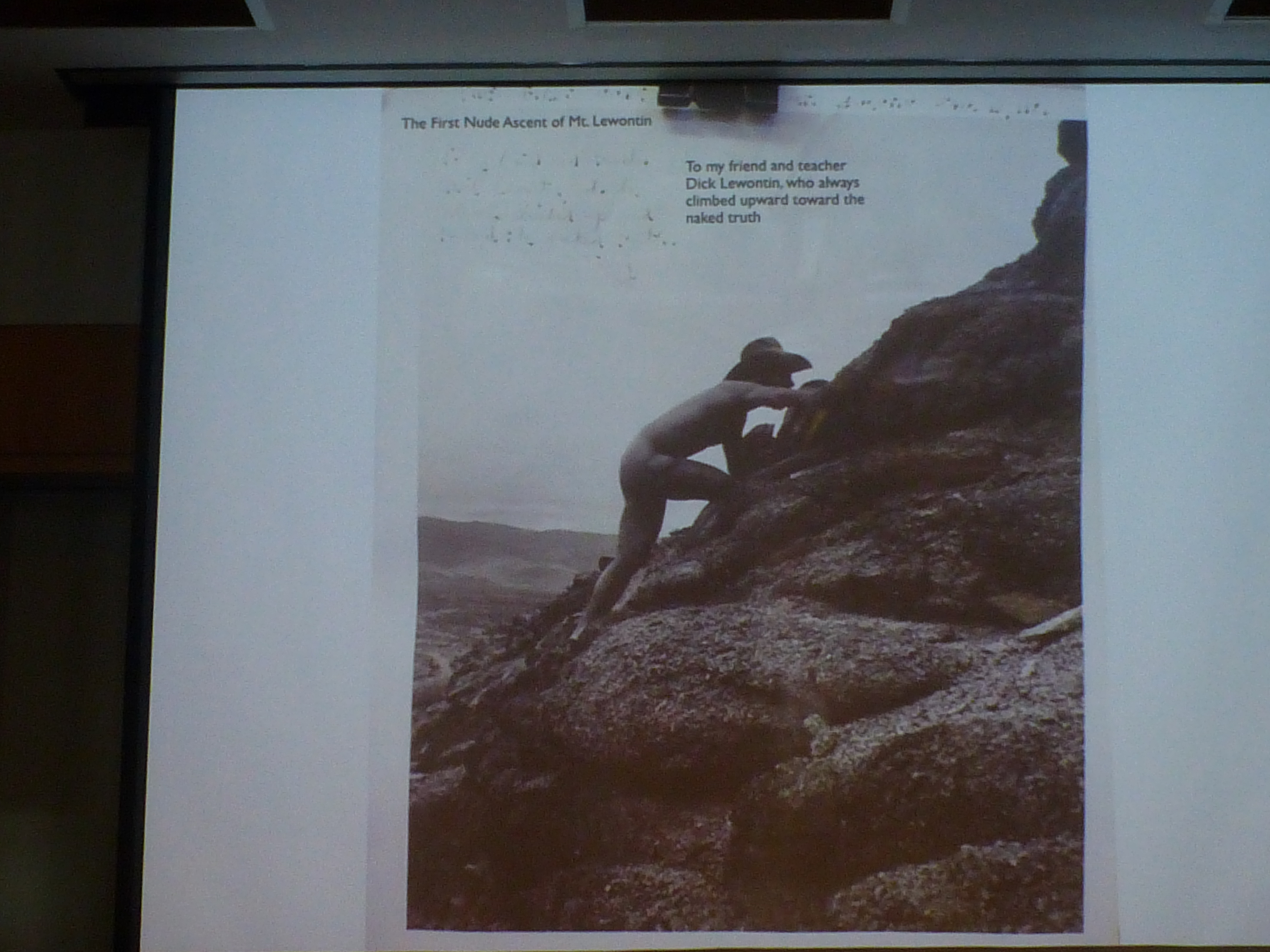 We came back in March and released about 100,000 flies, both D. melanogaster and D. pseudoobscura, that we’d captured the previous day in the big date grove at Furnace Creek Ranch in Death Valley, a famous tourist resort. We’d marked them, let them sit overnight in big buckets containing food so they could clean themselves from the fluorescent dust. And then the next evening, we gently lifted the lids to release the marked flies.

The next morning we collected at various places, including other oases, at various distances from the release site (we took great care not to carry any marked flies with us). The results surprised us: we collected marked flies, released in an oasis—a place where you’d think they’d stay—as far as 15 km from the release site the next morning (we caught 98 flies at two oases). They had either flown that distance or been blown by the wind.

These results, combined with those of other studies we did in Death Valley and in Maryland (see below), suggests that flies in or near an oasis occasionally “get lost”, and, when they’re just 20 or so yards from an oasis, cannot find their way back, and head out across the desert. Most of those die, but some make it to another salubrious place. This explains why flies are scattered not only throughout oases in the Death Valley region, but also can be trapped in godforsaken areas of the desert, including the Devil’s Golf Course, which has no vegetation at all! Here’s a picture of one of the places you can trap flies (we use baits of rotten bananas mixed with sugar, yeast, and some beer if we haven’t drunk it all):

Above are salt mounds: the remnants of an ancient sea (Lake Manly) that used to fill Death Valley. There is absolutely no vegetation: nothing for the flies to eat or breed on. And yet, they’re there. In fact, there’s almost nowhere you can go in this most desolate of deserts that you can’t trap flies. The desert is a thin sea of flies, most doomed but perhaps a few of them making it to another oasis, where they can yield what we call “gene flow.”

Here are the three papers we did on migration of Drosophila; the first is the Salt Creek Oasis release paper. I’m quite proud of these results but nobody ever cites them.

43 thoughts on “In which I climb Mount Lewontin, not only without oxygen, but without clothes”