Mark Sturtevant has graced us again with some lovely insect photos—and odonates (dragonflies) are one of his favorite groups.  His notes are indented:

Going out to photograph nature, one of course hopes to come across something unusual or special. But the truth is the outcome is a matter of randomly choosing this park or that park; and turning left versus right on a trail. So the reward of a special find has a lot to do with luck. Here are two examples, taken just days apart, that for me were very special. I might not ever have this much luck again.

The Magic Field backs up to a forest, and farther into the forest is the Flint river. As a result, there are a number of different dragonfly species that patrol the Magic Field.

There was a late summer species of mystery dragonfly that would patrol the forest margin, and I had no idea what it could be. They were large and black with neon green eyes, and they were especially nimble fliers even by dragonfly standards. Very discouraging to me. But the Magic Field is sometimes very generous in her gifts.

One day I was walking along the forest margin when one of the mystery dragons zipped past me from behind and continued along the trail ahead. But this one was behaving differently as it was regularly pausing to probe the forest edge.  Far ahead, the dragonfly suddenly ducked into the trees and clearly settled onto a twig!

Hurrying toward it, I got to where I could inspect it through the zoom lens. What I saw was a wondrous sight shown in the first picture. 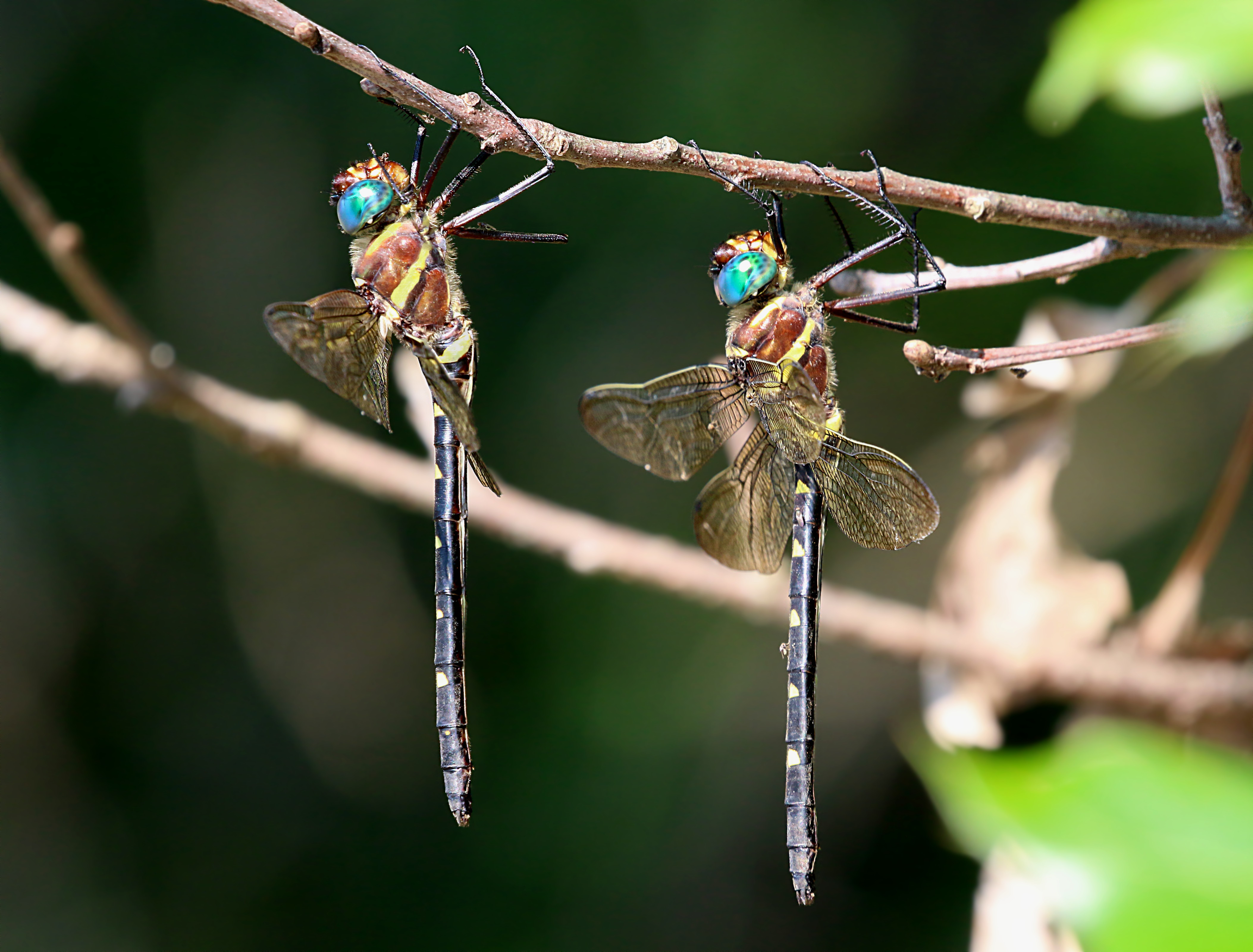 Two of the mystery dragons! I later learned that these were a species called royal river cruisers (Macromia taeniolata). They were both females.

I hustled to get in front of them, and what followed was an extraordinary time as they proved so tolerant to my presence that even taking pictures with the macro lens was permitted. One of the cruisers would periodically take off to land on a different twig, but after a few moments it would fly back to settle next to its partner. Were they seeking each other out, or did they simply like the same twig? 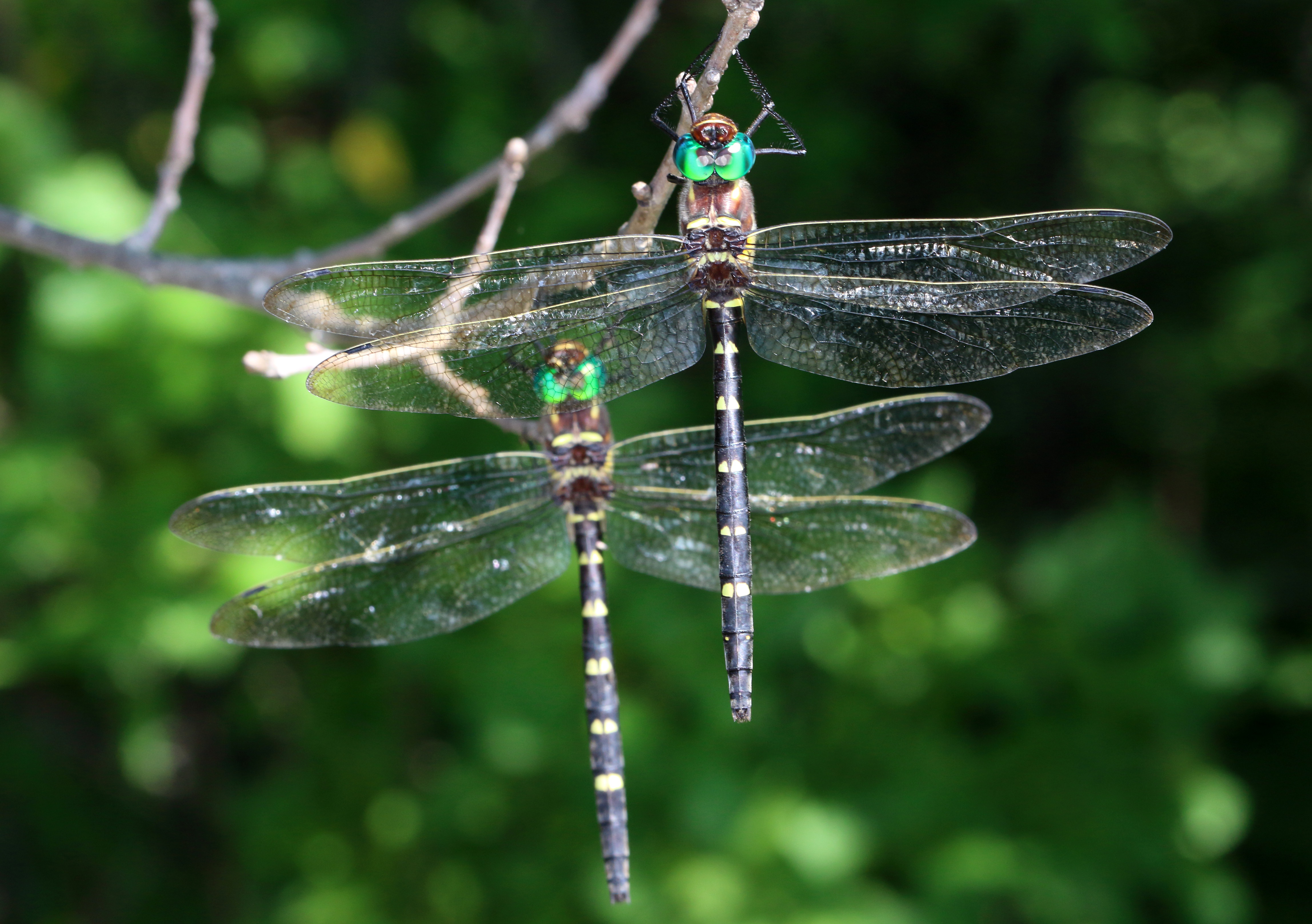 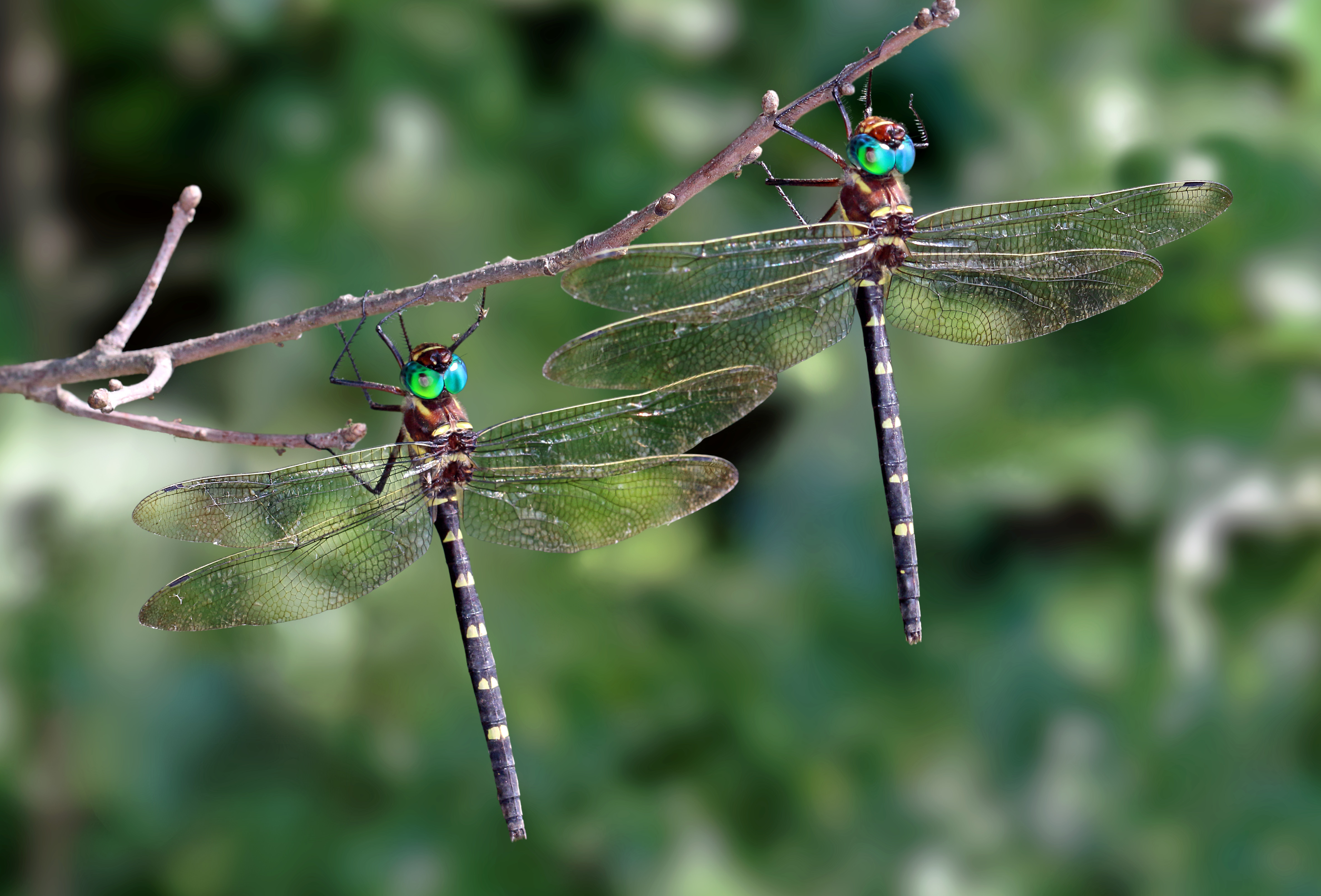 As a post-script to this story, I have since found that cruisers will land, but one must be willing to follow and be very patient. Once perched, the species is easy to photograph. So now I have many more pictures of both females and males, although no one I know has seen them perching together. 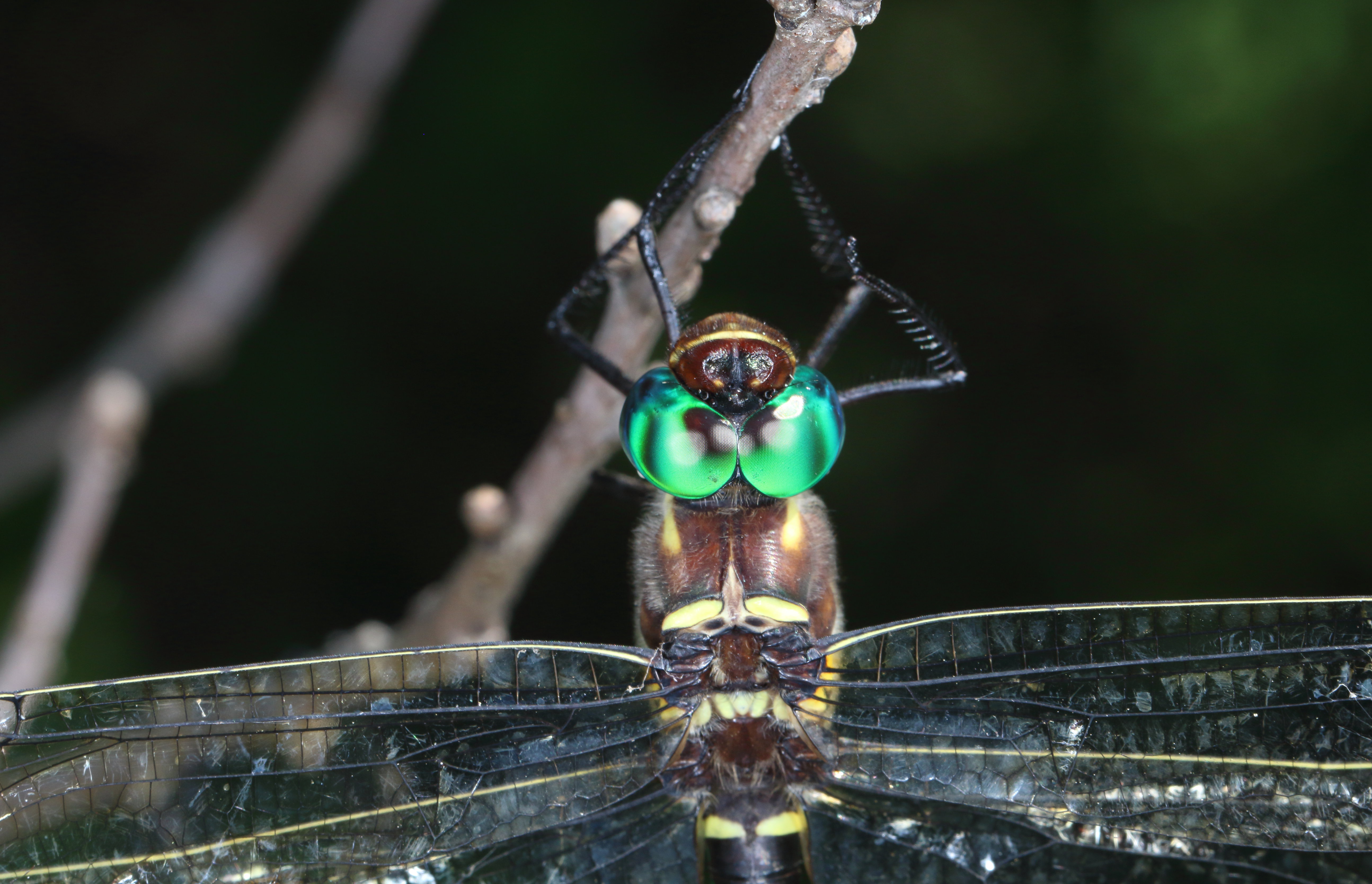 Dragonflies are often given impressive names. There are cruisers, pondhawks, skimmers, and so on. But the coolest name is granted to one of most coveted dragonflies called the “dragonhunter” (Hagenius brevistylus). This is only barely not the largest of our dragonflies in the mainland U.S., but it is easily the largest my area. I don’t see how anyone could not be impressed if one flew by, especially since they are not considered common over most of their range. The dragonhunter is so-named because they prefer to take large prey, including other dragonflies, as shown in the linked picture (two photos down). In this case, a dragonhunter is eating a river cruiser!

At one of my favorite parks I came across a male dragonhunter that was patrolling its river territory. It took the better part of an entire day staking out one particular twig that it favored, but it did eventually land, and here it is. I could barely breathe taking this first picture. 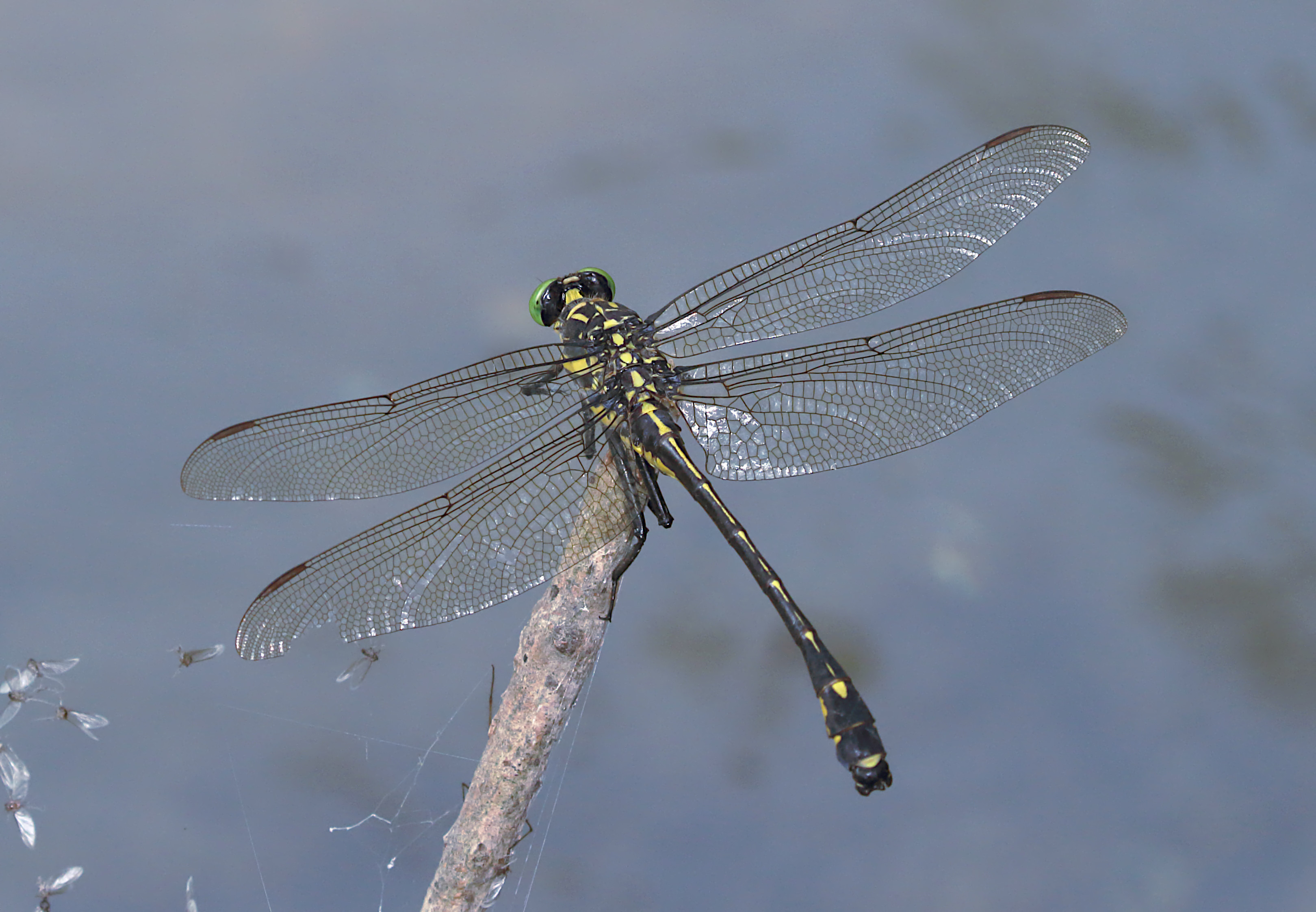 The river that it was patrolling was navigable, so I took the chance to wade out alongside this very special insect. The last picture was taken while I was sitting in the water; expensive camera rig balanced on one knee. I know that was not smart, but — dragonhunter!! He was completely indifferent about my rapt attention. 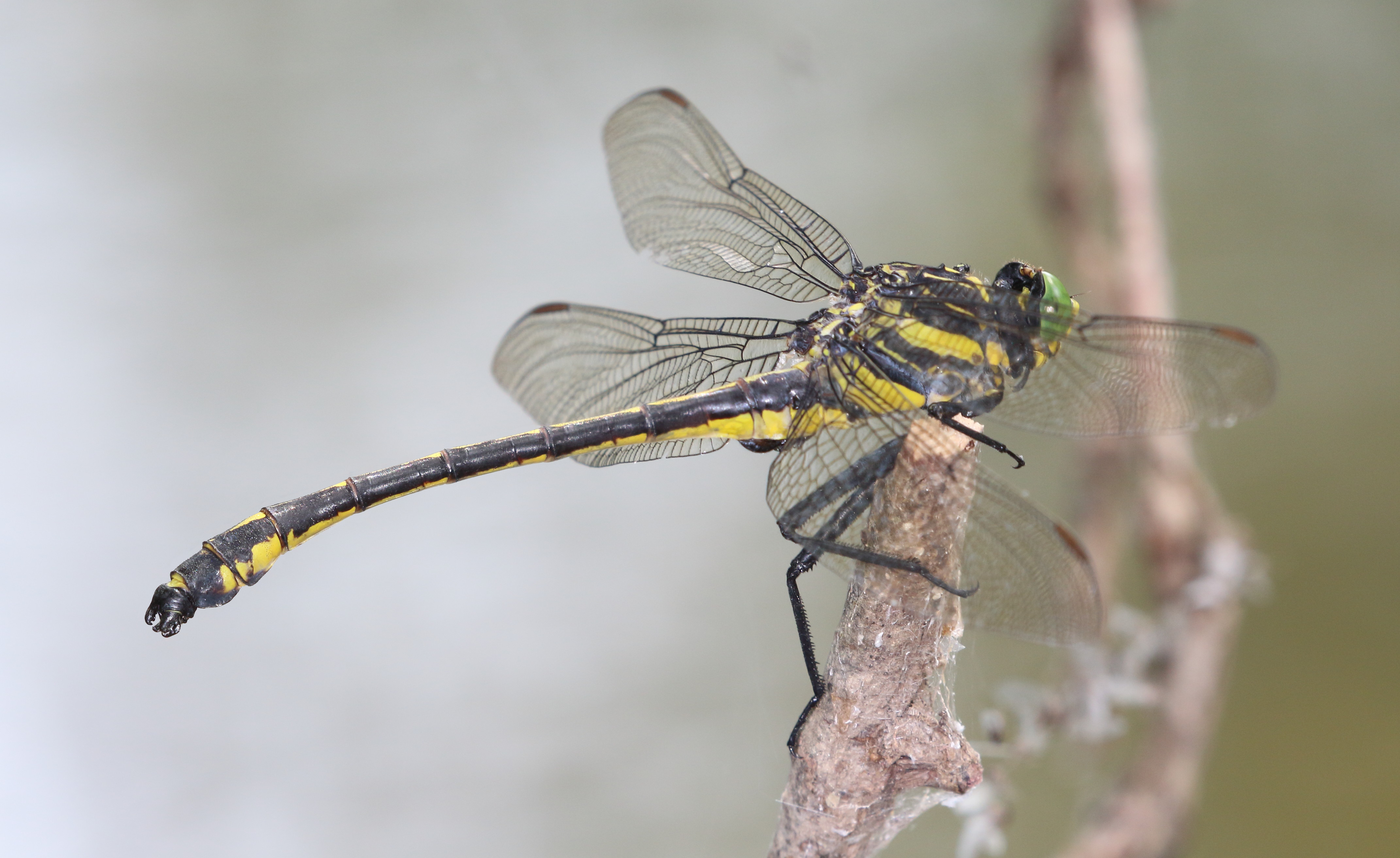 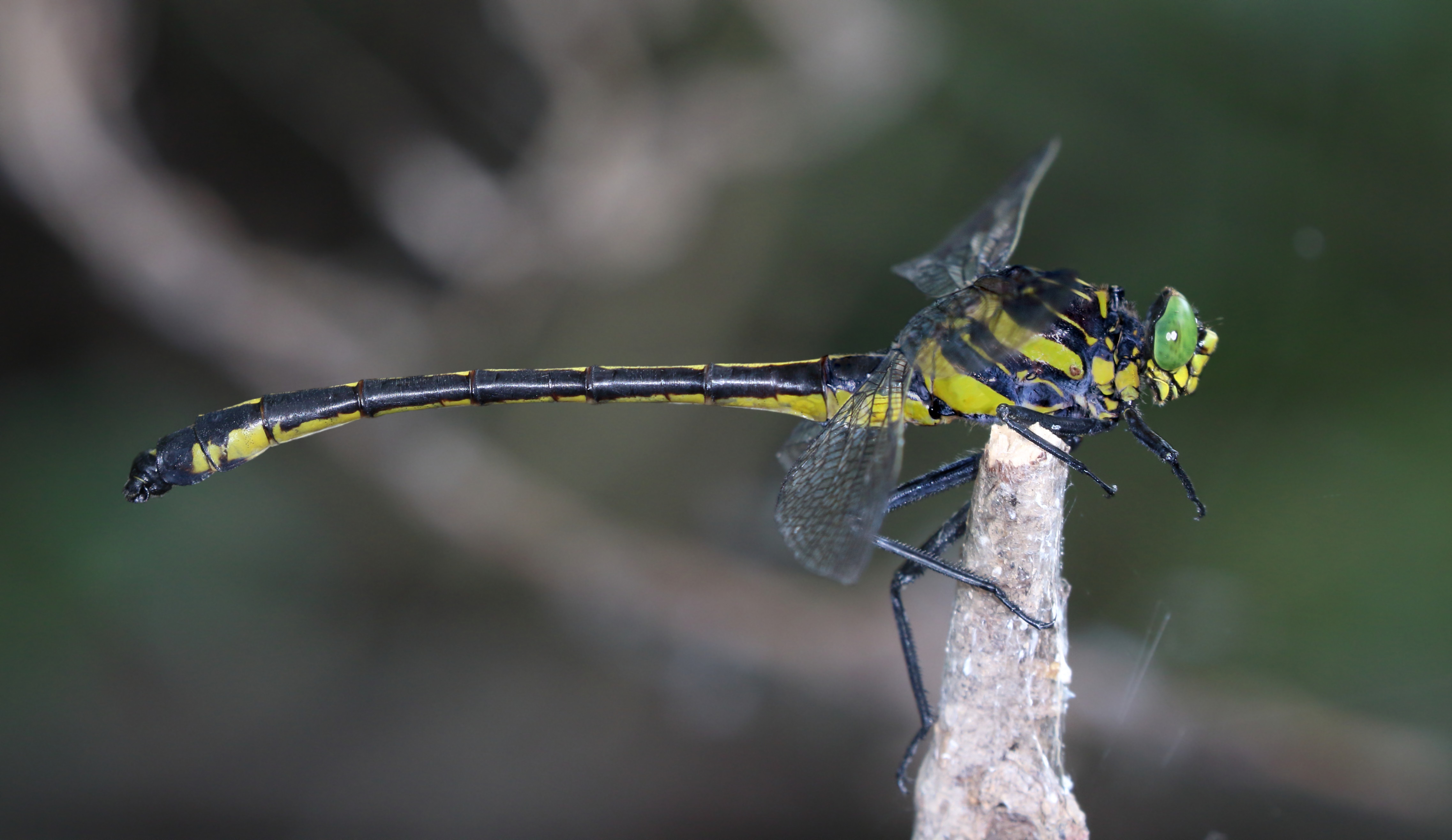 What an awesome insect! Paulson’s field guide Dragonflies and Damselflies of the East describes how this “monster dragonfly” characteristically sits with their over-sized thorax and long legs in the manner that is shown. Paulson says of this: “seeming awkward, too large for perch.” Yep, that how they are!

Mark also sent a link to a site showing a dragonhunter that captured a ruby-throated hummingbird.