Evolutionary ecologist Bruce Lyon is back, and during the pandemic he’s managed to get some great hummingbird photos, along with a good dollop of natural history for your edification. The IDs and captions are his.

Here in Santa Cruz County, California, we were under pretty strict shelter-in-place requirements a couple of weeks ago. All beaches were off limits, as were state parks and all hiking trails. Not ideal for nature photography. I was able to continue some photography from inside my house by opening an upstairs window and photographing the Anna’s hummingbirds (Calypte anna) that visit the feeder by the window and perch in the nearby hawthorn tree.

Below: The hummingbird feeder with the hawthorn tree in behind. 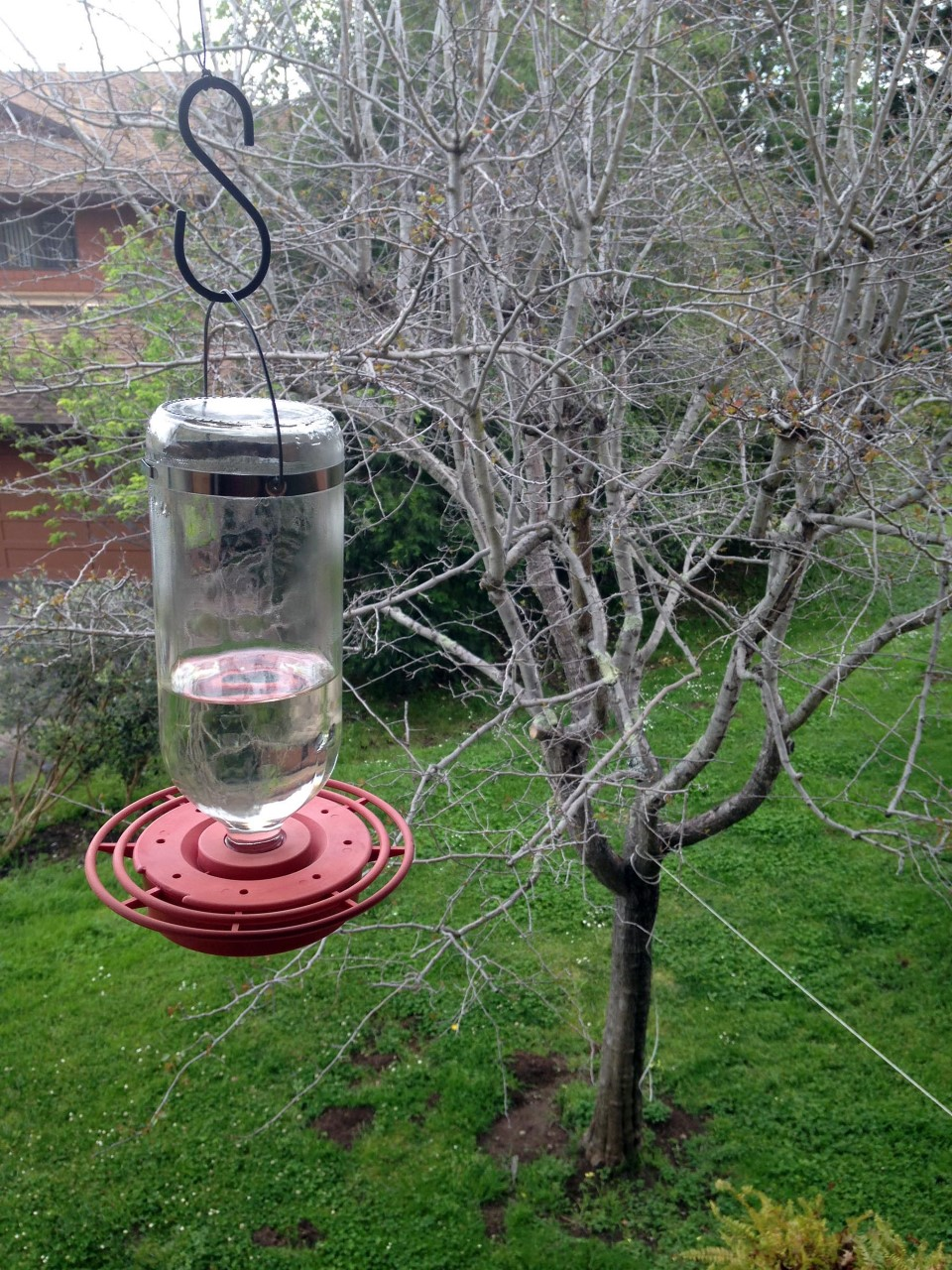 Below: Nectar-feeding birds, which have evolved independently on several continents (hummingbirds, sunbirds, honeyeaters) all tend to be very feisty and fight and chase a lot. Energy-rich nectar is apparently worth defending and fighting over. One male has decided that my feeder is ‘his’ feeder and often chases other birds away. I got the three following action shots by accident. I was photographing the female just as the male attacked, his iridescent throat gorget and crown glowing in anger.  She spread her wings and tail in defense. 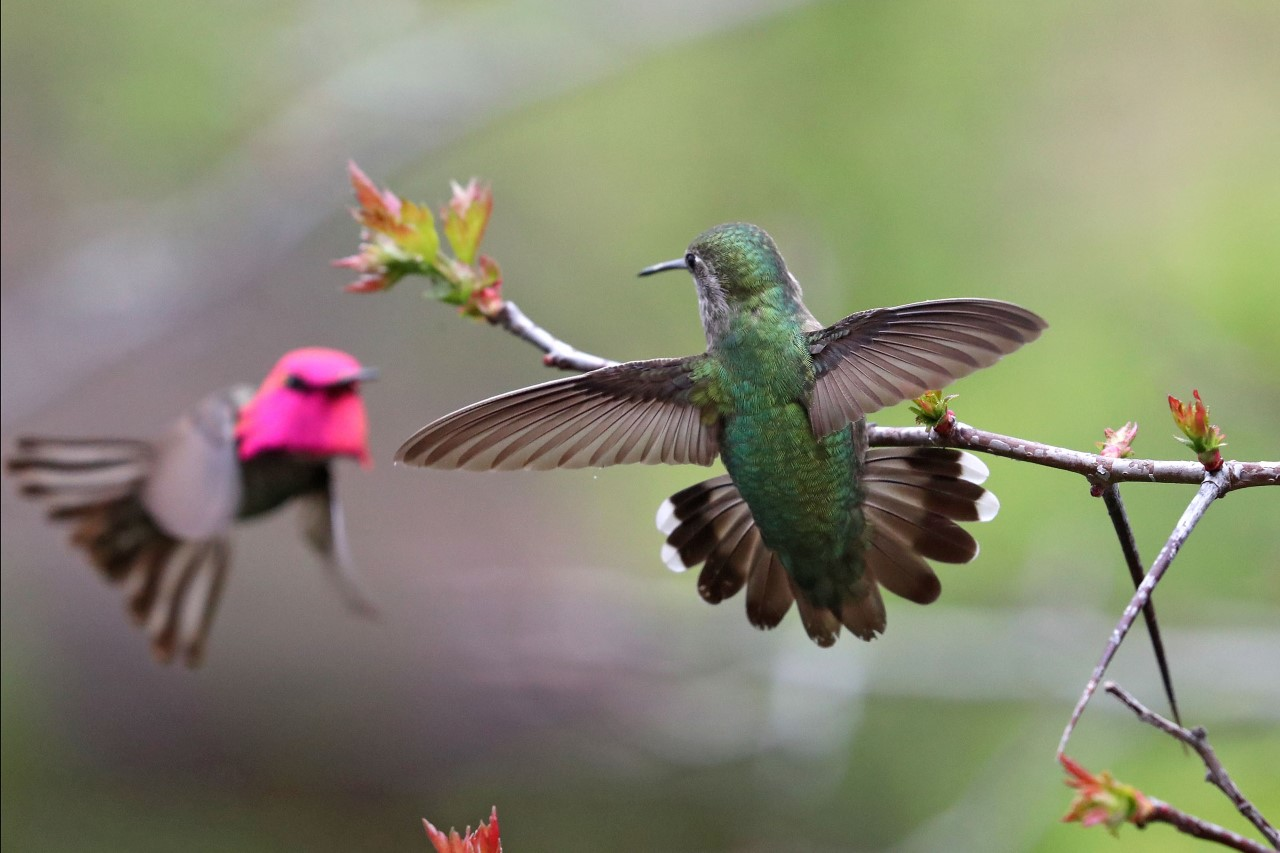 Below: Another view of the same interaction as the male swerves around before the actual attack. 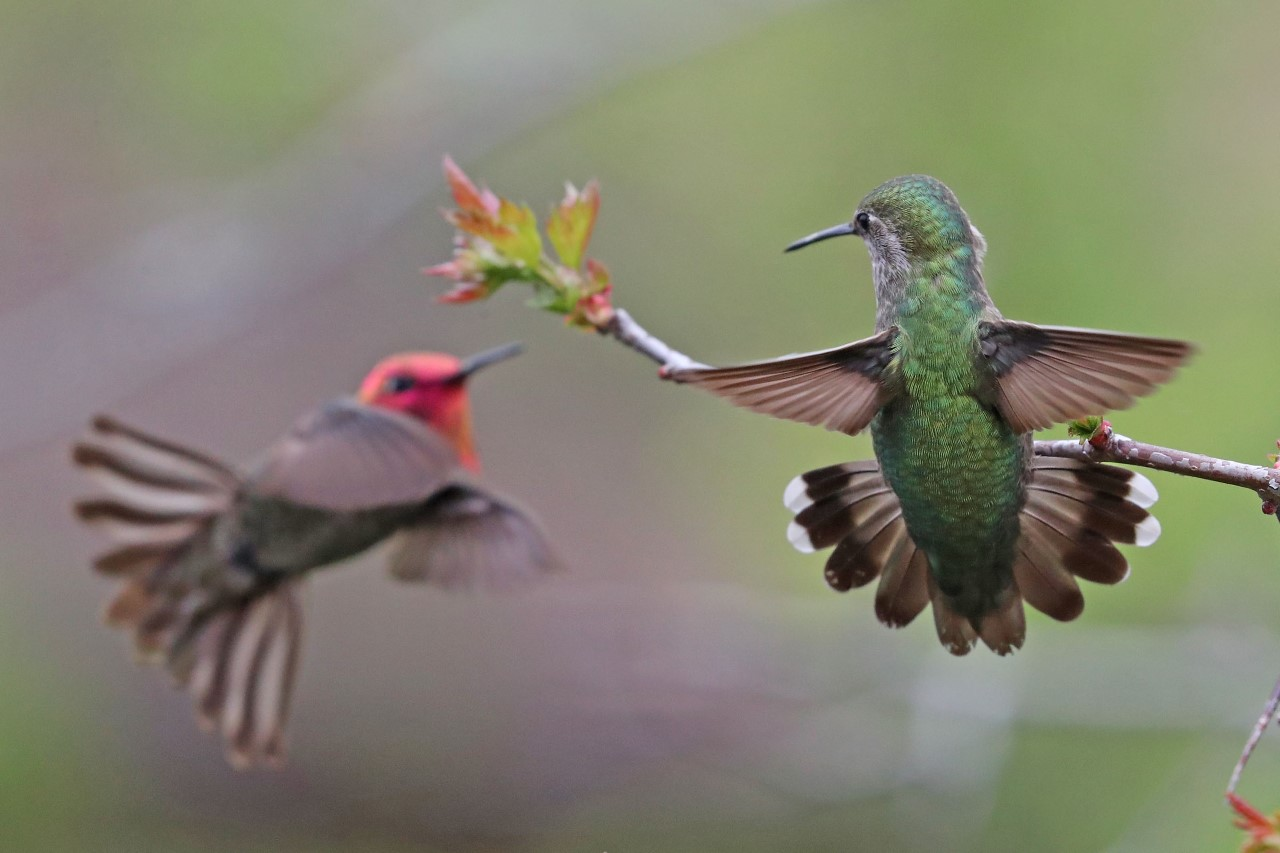 Below: The male circled around and approached the female from below to attack with his beak (the female is mostly out of view just above the frame). In some hummingbirds, the beaks have been evolutionarily modified to be effective weapons: in some species, straight and dagger-like, while in others the tip of the beak has backward facing saw-like teeth for ripping and plucking feathers from opponents. 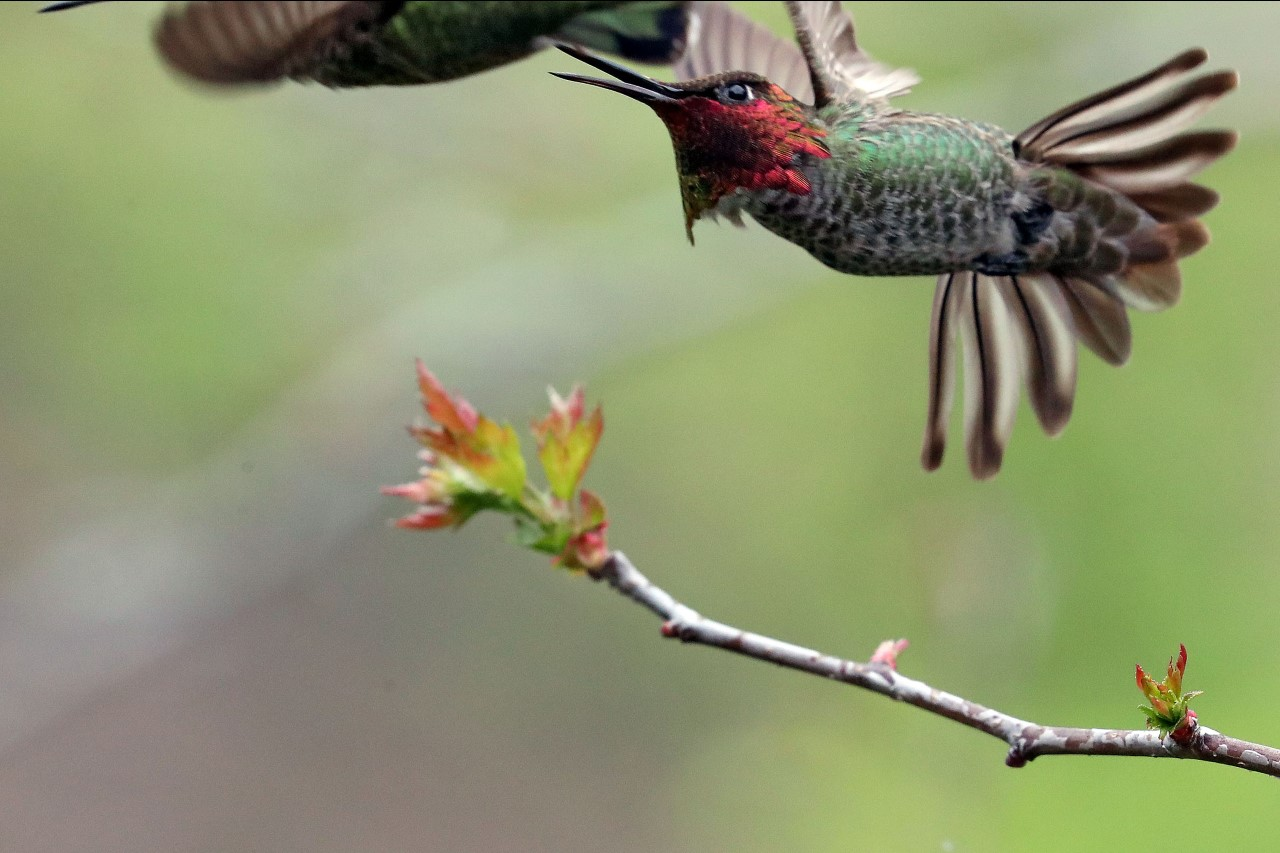 Below. A male gets rid of excess water. Nectar-eaters have a problem—dealing with a high volume of excess water they ingest from the large amounts of nectar they consume. The feces are mostly water and they often expel more than their body weight in water each day. According to the online Birds of the World species account (Cornell University), in extreme situations (i.e., very cold), Anna’s hummingbirds may consume more than three times their body mass in nectar in a day. And what goes in must come out, so they have to dump a nearly equal amount of water. Consider having to get rid of triple your body weight in water every day! 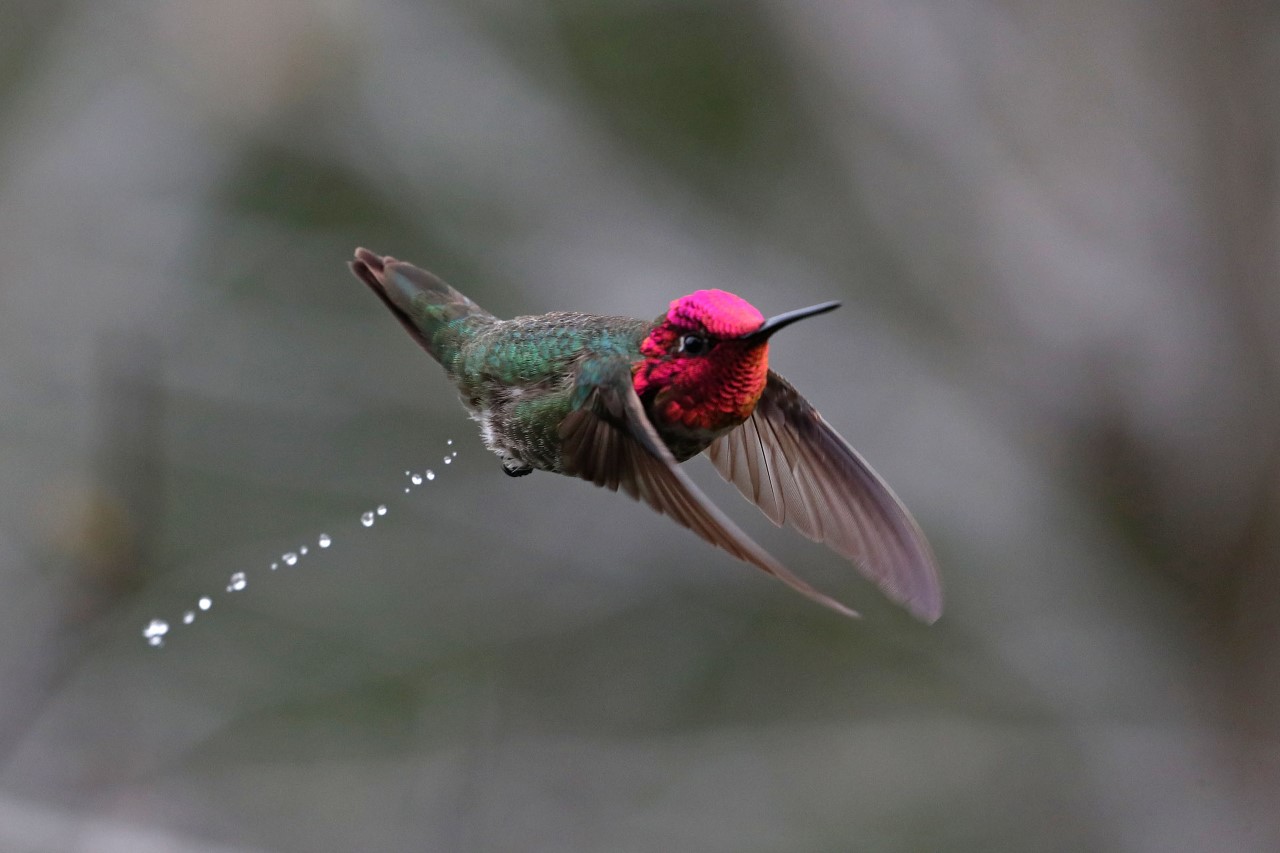 Below: A female Anna’s hummingbird. The birds are not banded but four females fed at the feeder at the same time so that is the minimum local female population. The male is almost always present as he defends the feeder. The females come for regular well-spaced short visits, which suggests they probably have nests not too far away. I find the females very beautiful even if they are not as flashy as the males. 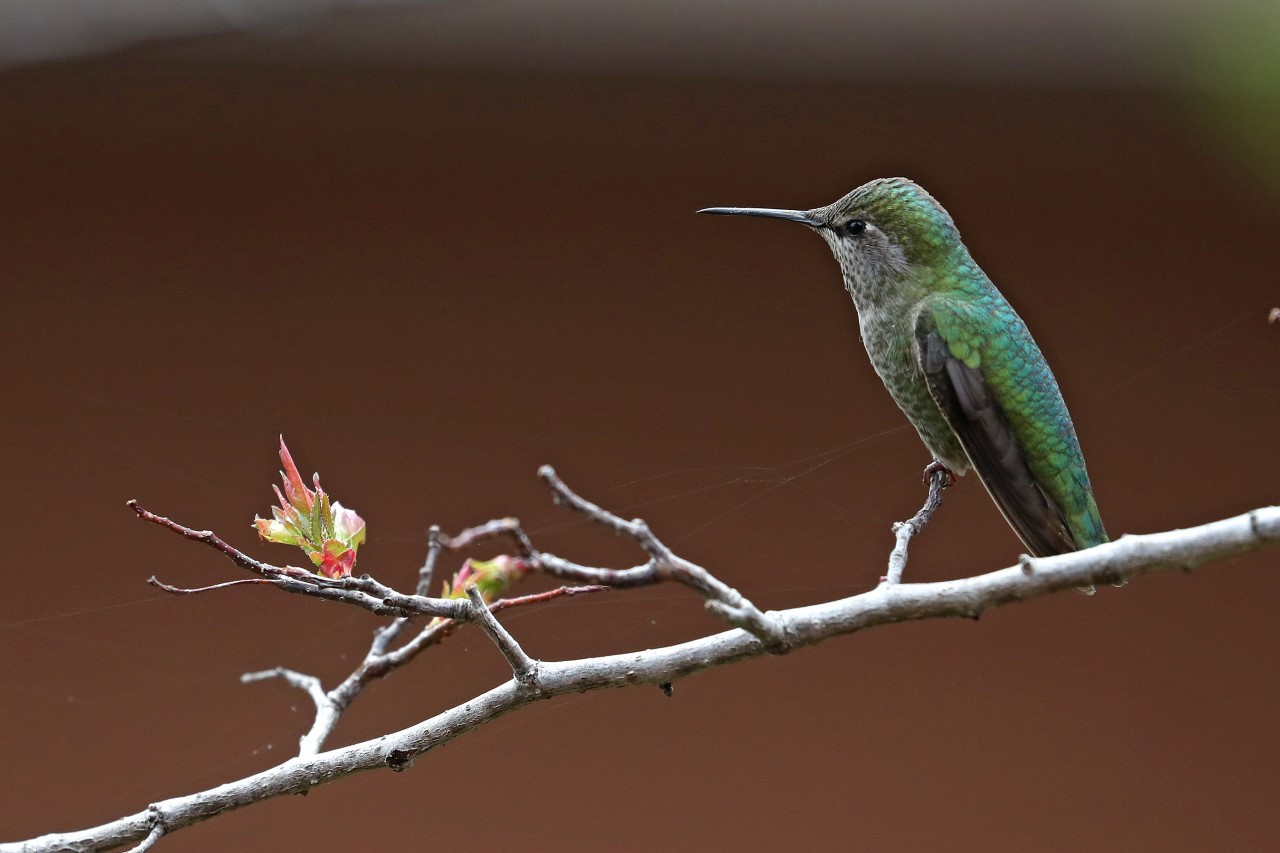 Below: One of the females seems dominant to the male who thinks he owns the feeder. She did not take any guff from him and instead chased him away whenever he got too close. Here she threatens him as he flies nearby out of frame. 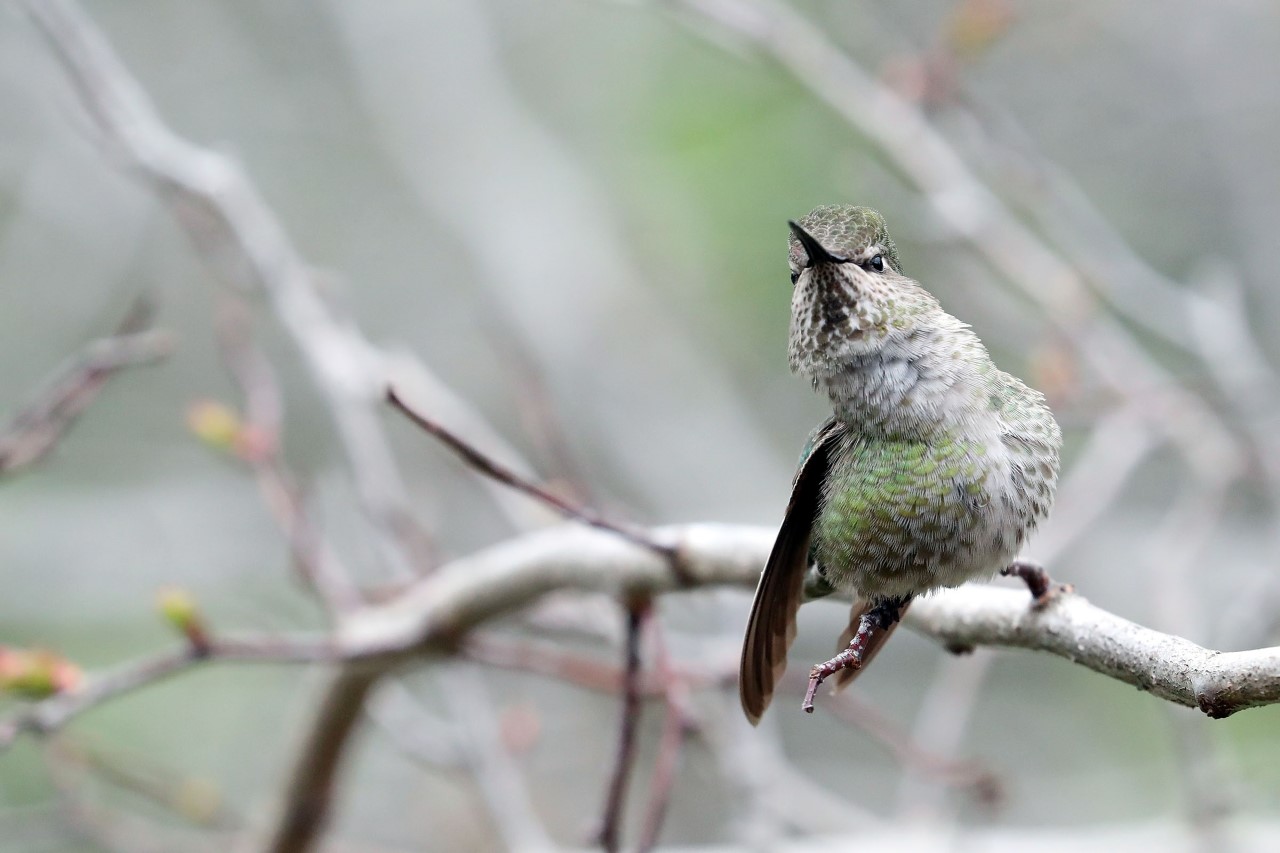 Below. A female shows off her wings. Hummingbird wings are unusual in a couple of ways that relate to their unusual flight mode. The wings are relatively small and propeller-shaped, and they also have a reduced number of secondary flight feathers compared to the other birds. The bigger feathers at the bottom of the wing (trailing edge) are the flight feathers; the outer ones (away from body) are primaries, the inner ones are secondaries. Primaries are important for generating thrust during flapping flight, while secondaries function mostly to provide lift (according to the ornithology textbook I use in my bird class). Most birds have either 9 or 10 primaries, but the number of secondaries per wing varies: wandering albatross have 32 while Anna’s hummingbirds have only 6. The reduction in secondaries makes sense since hummingbirds fly more like helicopters than gliders, so it seems they have devoted most of the length of the wing to the thrust part of flight. They also have the neat trick of being able to generate lift on both the forward and backward strokes— they do this by rotating the wing almost 180 degrees. 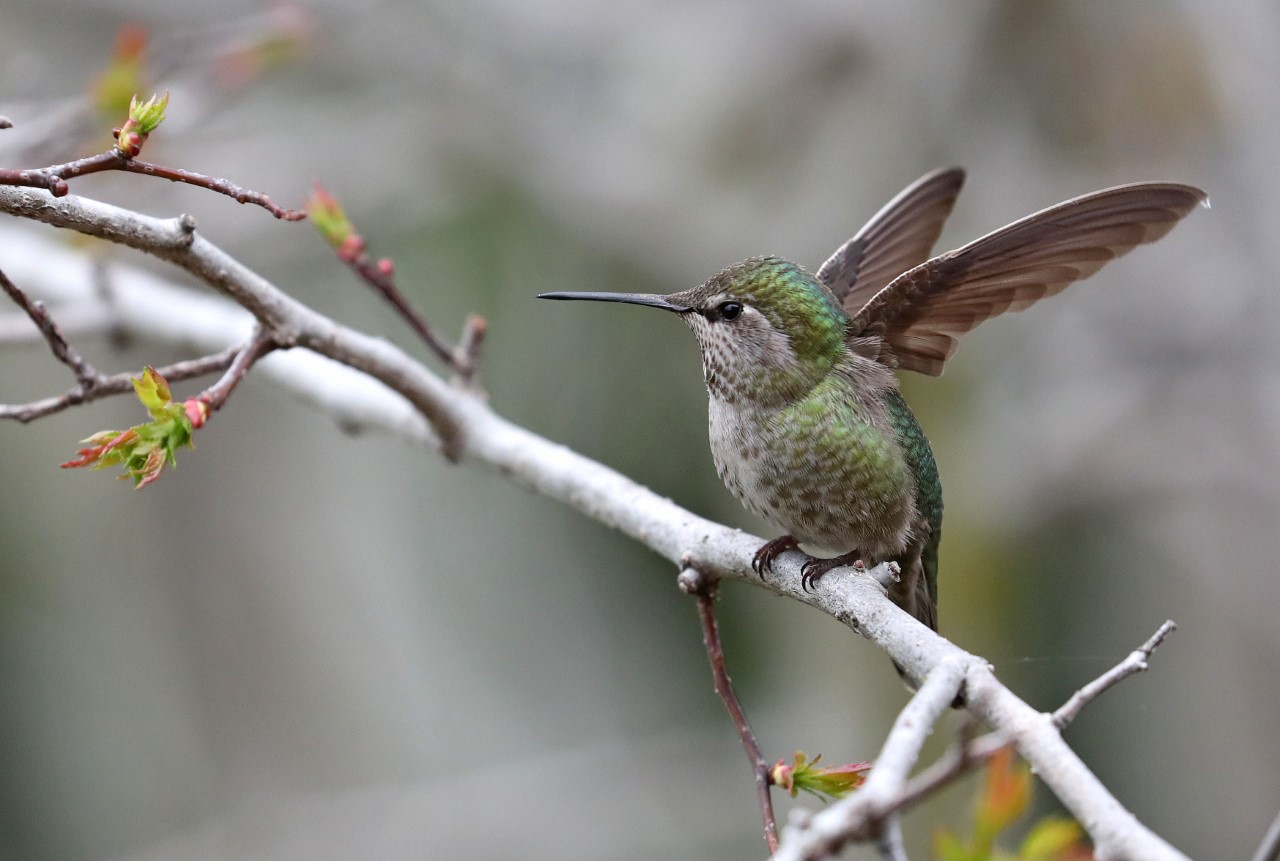 Below: Just to convince you that hummingbird wings really are relatively small, here is the same hummingbird compared to a dunlin (Calidris alpina), a type of sandpiper that I photographed doing a wing display at Point Barrow, Alaska. Note that the dunlin is molting some of its primary feathers (the gap between secondaries and primaries).

Below: Another female shows off her tiny wings. Tiny wings work for hummingbirds because they are such small birds. Wings generate lift (push the body upwards, opposing gravity) and the amount of lift is proportional to wing area—bigger wings produce more lift.

However, bigger birds are heavier, so more lift is needed to keep them airborne. Due to basic geometry and the way that area and volume change with increases in an object’s size, as birds get larger, the area for lift does not keep pace with the volume (or mass) of the object. This means that small birds have a much easier time getting enough lift for flight compared to large  birds.  If you recall your basic geometry, volume (and mass) is proportional to the length of the object cubed (length3) while wing area (and lift) is proportional to the length squared (length2). As we increase the size of the organism, length3 increases faster than length2.

An important index that reflects the relation between mass and lift is “wing loading”—the animal’s mass divided by its wing area. This is measure of the mass that each unit area of wing has to lift (grams/cm2). Bigger wing loading numbers means that it is tougher to fly, and for the reasons described above, large birds tend to have much higher wing loadings than small birds. 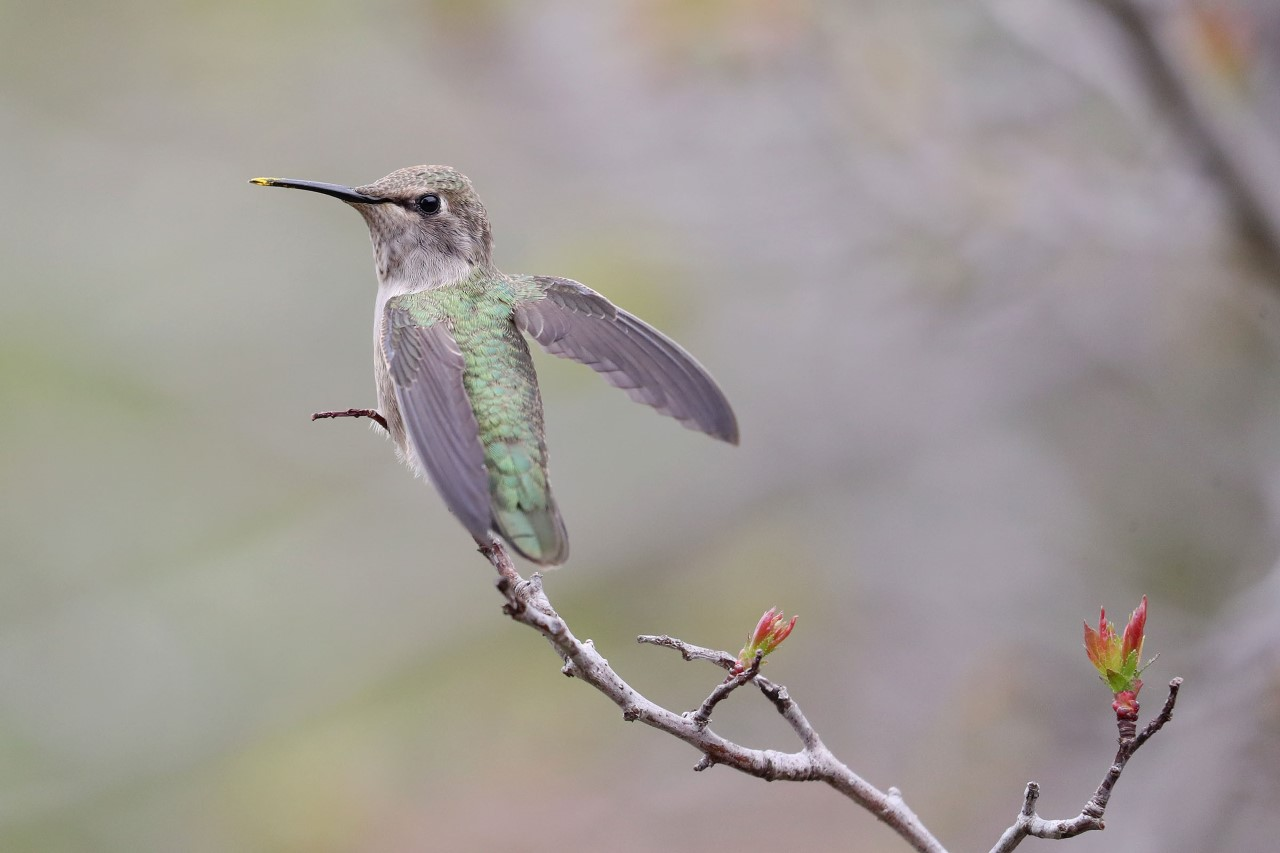 Below. To compensate for the fact that wing area does not keep pace with increases in body mass as birds get bigger, the only way for large birds to have the same wing loading as a small bird would be to have ridiculously large wings.  The illustration below shows (a) a sparrow, (b) a normal albatross, and (c) the wing size an albatross would need to have the same wing loading as a sparrow (a). Such a body shape is not biologically plausible, which means that bigger birds have to find other ways to increase lift, such as having relatively longer wings (much of the lift is generated from the leading edge of the wing) or flying faster (lift increases exponentially with flight speed). 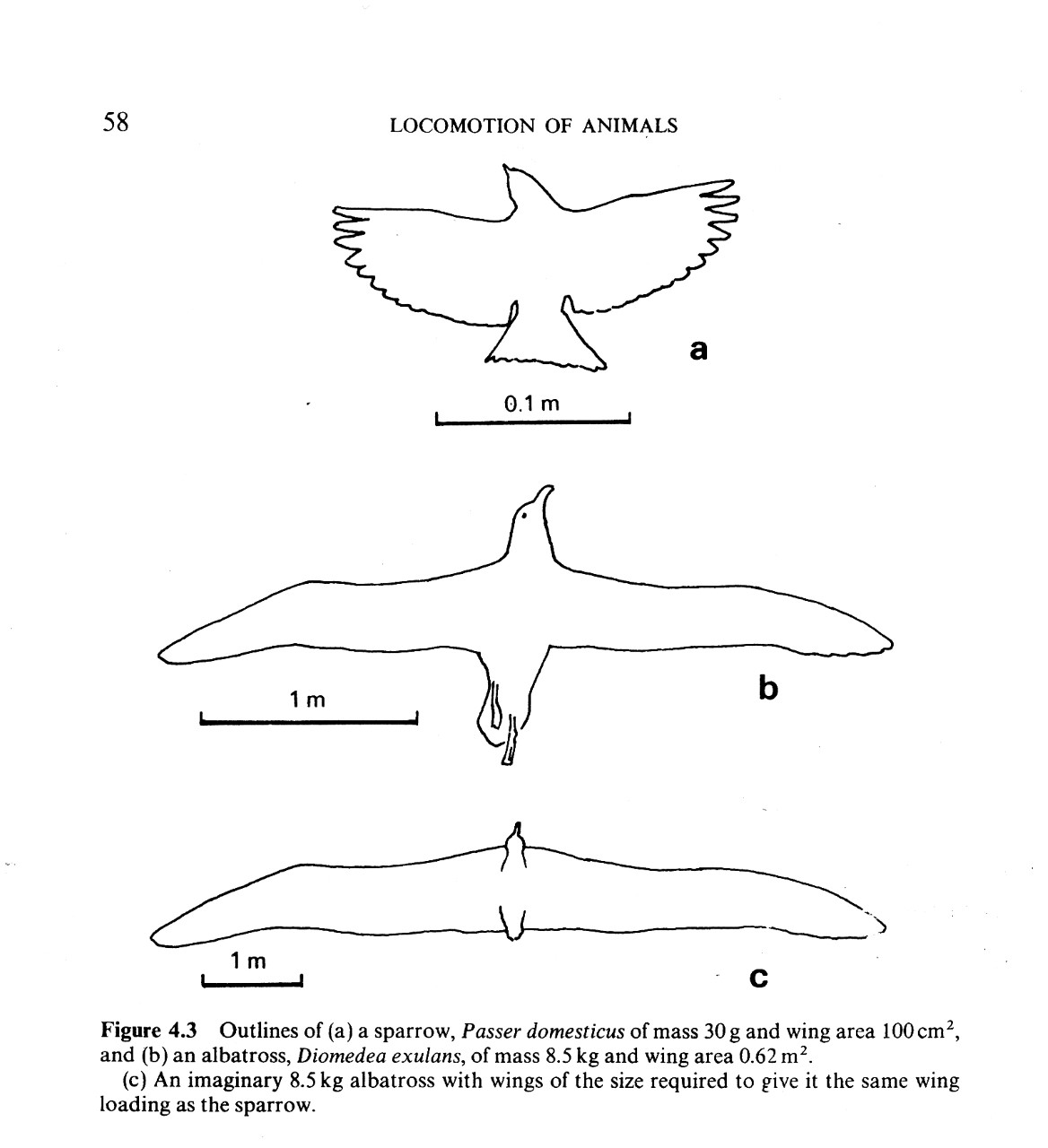 Below: A male in flight. 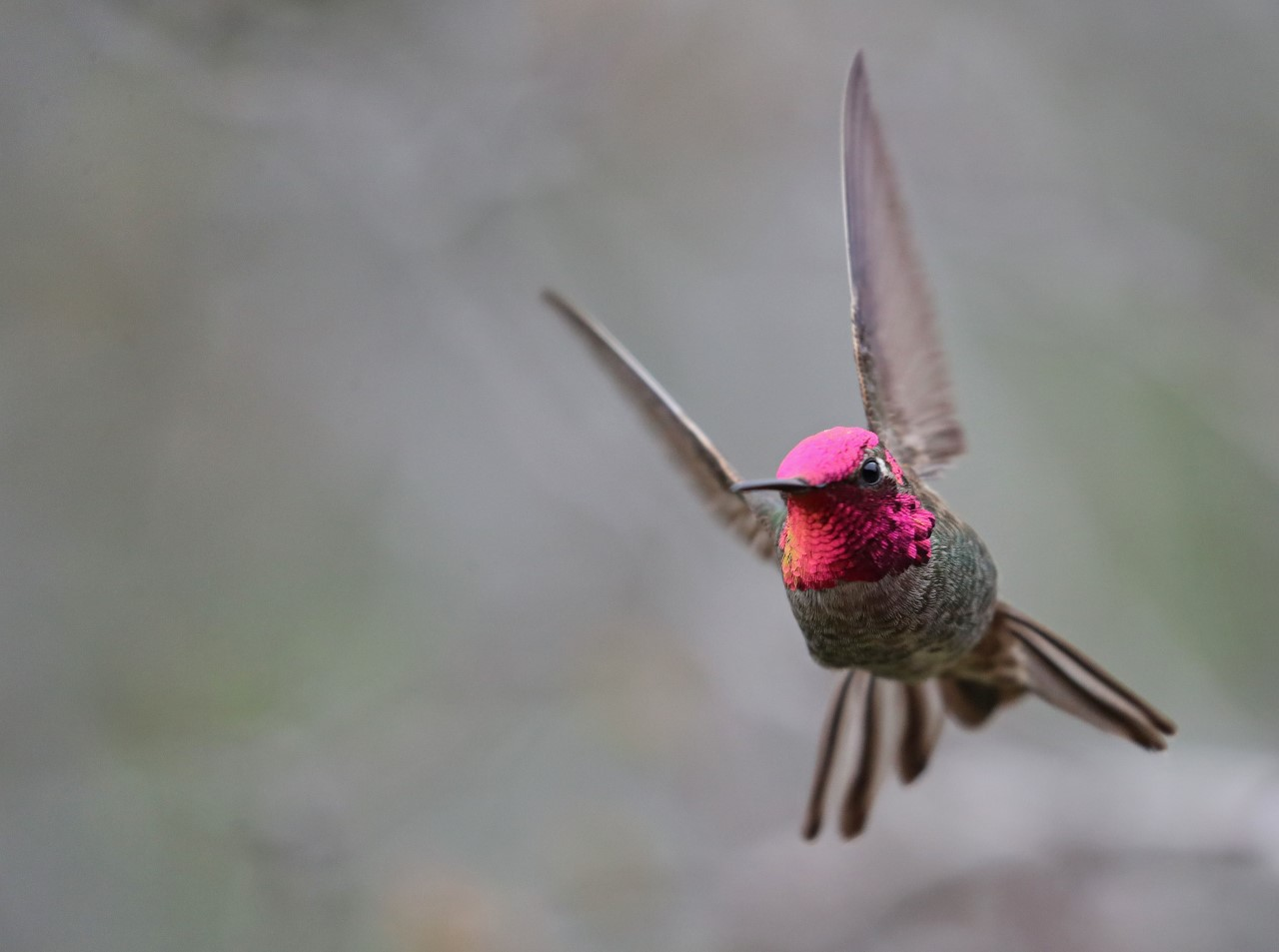 Below: A male flares out his throat gorget to threaten a bird visiting the feeder. 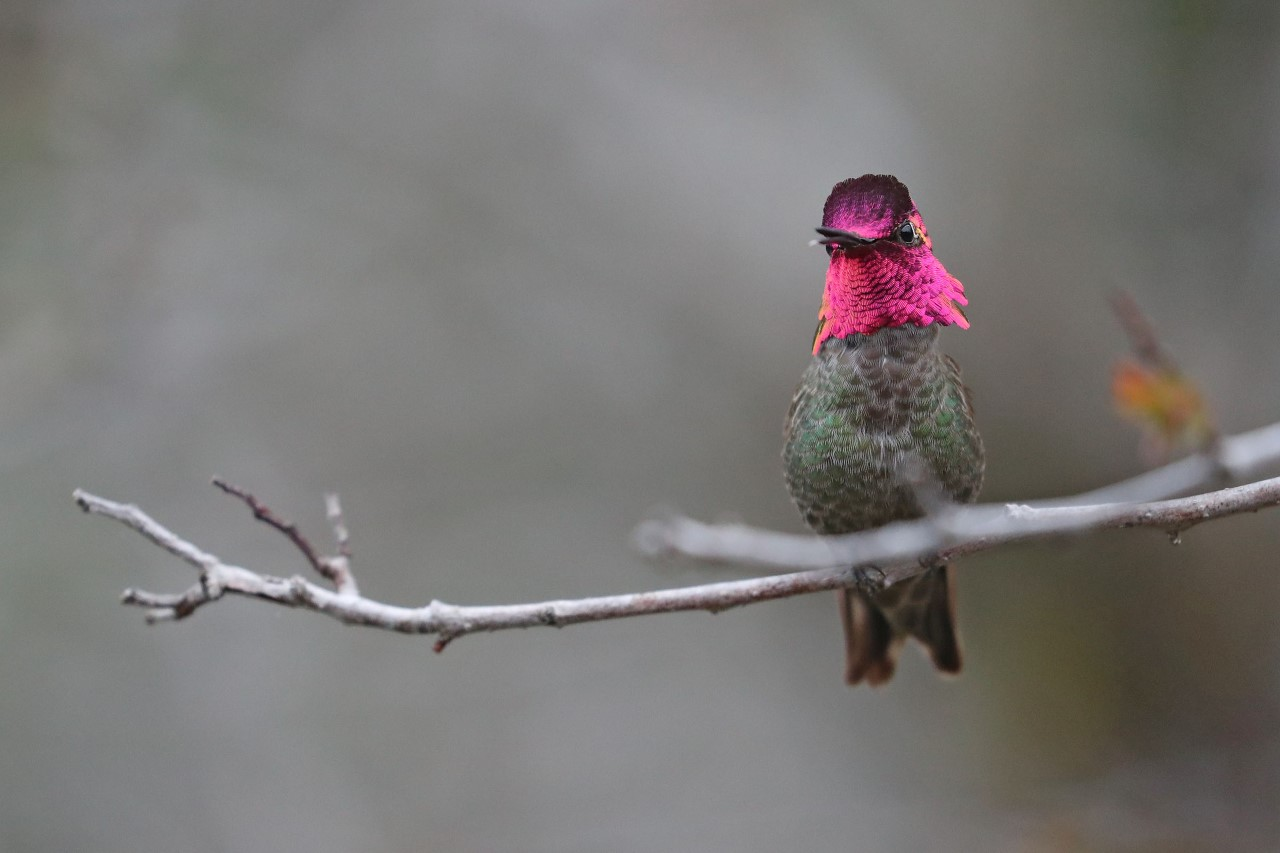 Below: A video taken a couple of years ago that nicely shows how the colorful plumage is iridescent and shows color only from some angles. I am convinced that the males have a good sense of which direction gets the color and can strategically direct the color like beam of light towards targets. Note the threat display in which the male waves his head back and forth as an intruder flies by out of frame. The male then bursts into song. Three groups of birds are able to learn their songs—hummingbirds, parrots and oscine songbirds. For all other birds, song is innate (instinct, no learning required to sing the song)

Below: A photo from 2016 of an Anna’s hummingbird nest taken at my sparrow study area in University Arboretum. The female with her two chicks who left the nest the next day. As far as I know, hummingbirds always lay 2 eggs. Males do not provide any parental care. 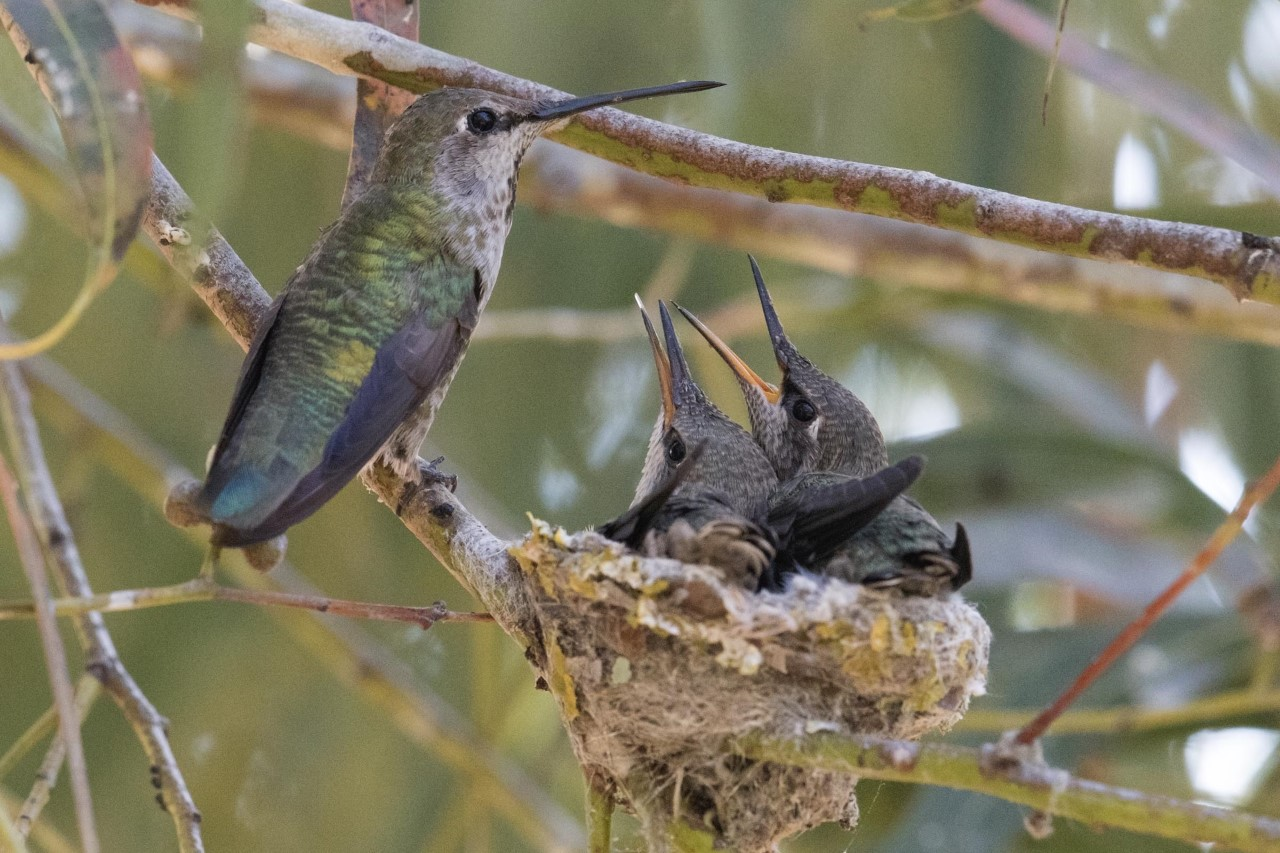