Mark Sturtevant sent some nice insect and arachnid photos, including SEX, and I’ve indented his captions and IDs:

The narrative and pictures in this one (from 2018) are a bit different, since the pictures of the caterpillar are ‘interrupted’ with pictures of Arachnid sex.

In the first picture is a delicately lovely female Eastern forktail damselfly (Ischnura verticalis). I find this species to be exceptionally difficult to photograph since they are very shy, but also too small for the usual method of using a zoom lens. But this one allowed me get close with the 100mm macro. 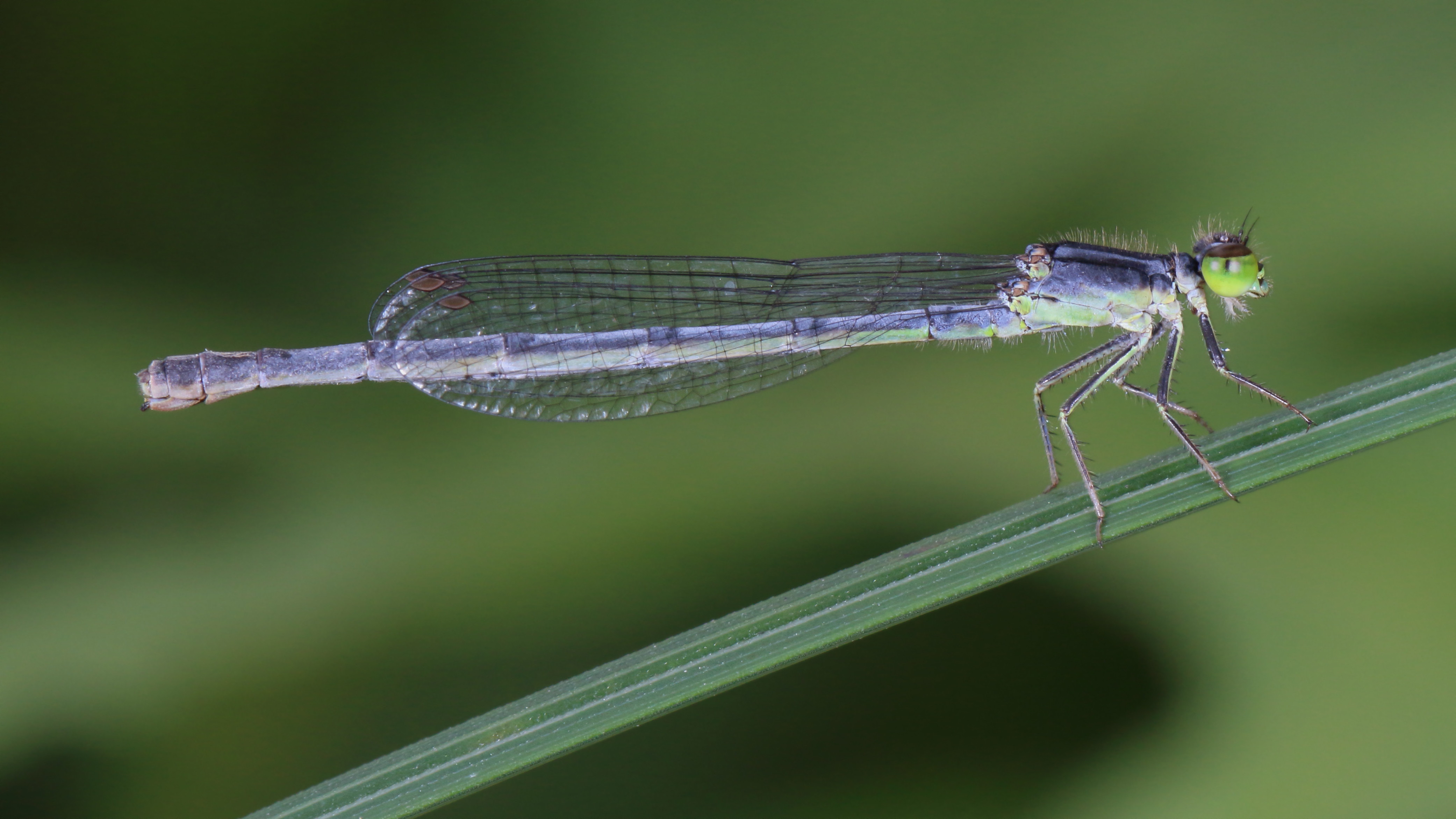 Next is a velvet ant (Timulla vagans). These are actually wingless wasps that parasitize a range of insects, depending on the species. This is one of the rare occasions where one of these insects was sitting still. They don’t often do that. 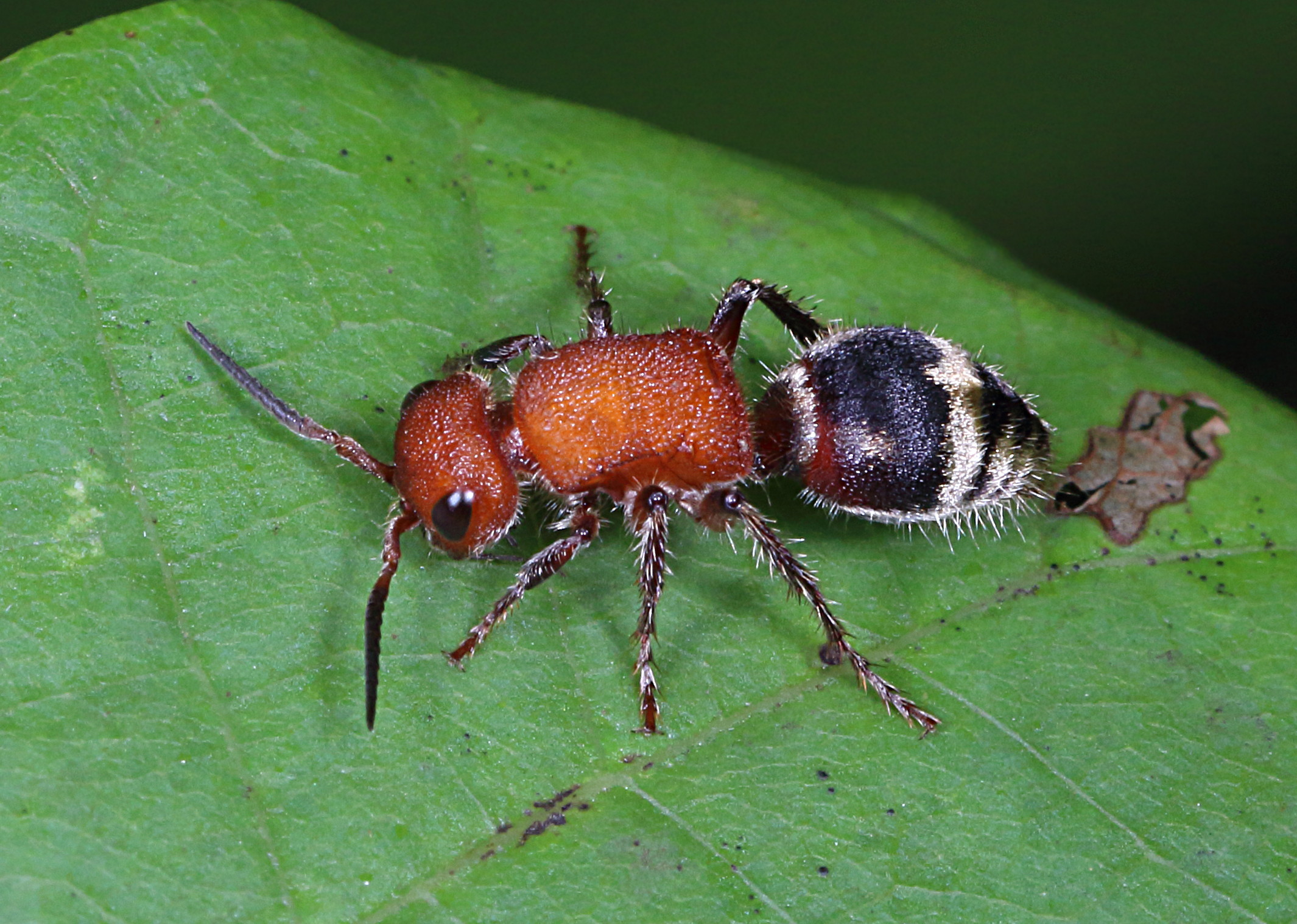 The tiny moth shown in the next picture is the Ailanthus webworm moth (Atteva aurea). The larvae are commonly found on an invasive tree called “tree of heaven” (Ailanthus altissima), and there might be an interesting story here. The details are not clear, but the moth used to be restricted to Florida and points south, where the larvae fed on various trees. But beginning in 1700s, the tree of heaven was introduced to North America as an ornamental tree. It was soon discovered that the tree itself is highly aggressive and it is now considered a pest. Anyway, the moth has expanded its range northward, and in its expanded range its main host is tree of heaven. Here, the moth is even given its own species name (A. aurea), classifying it as separate from the southern group (A. floridiana),  although of course that does not necessarily mean it is a different species in the biological sense. 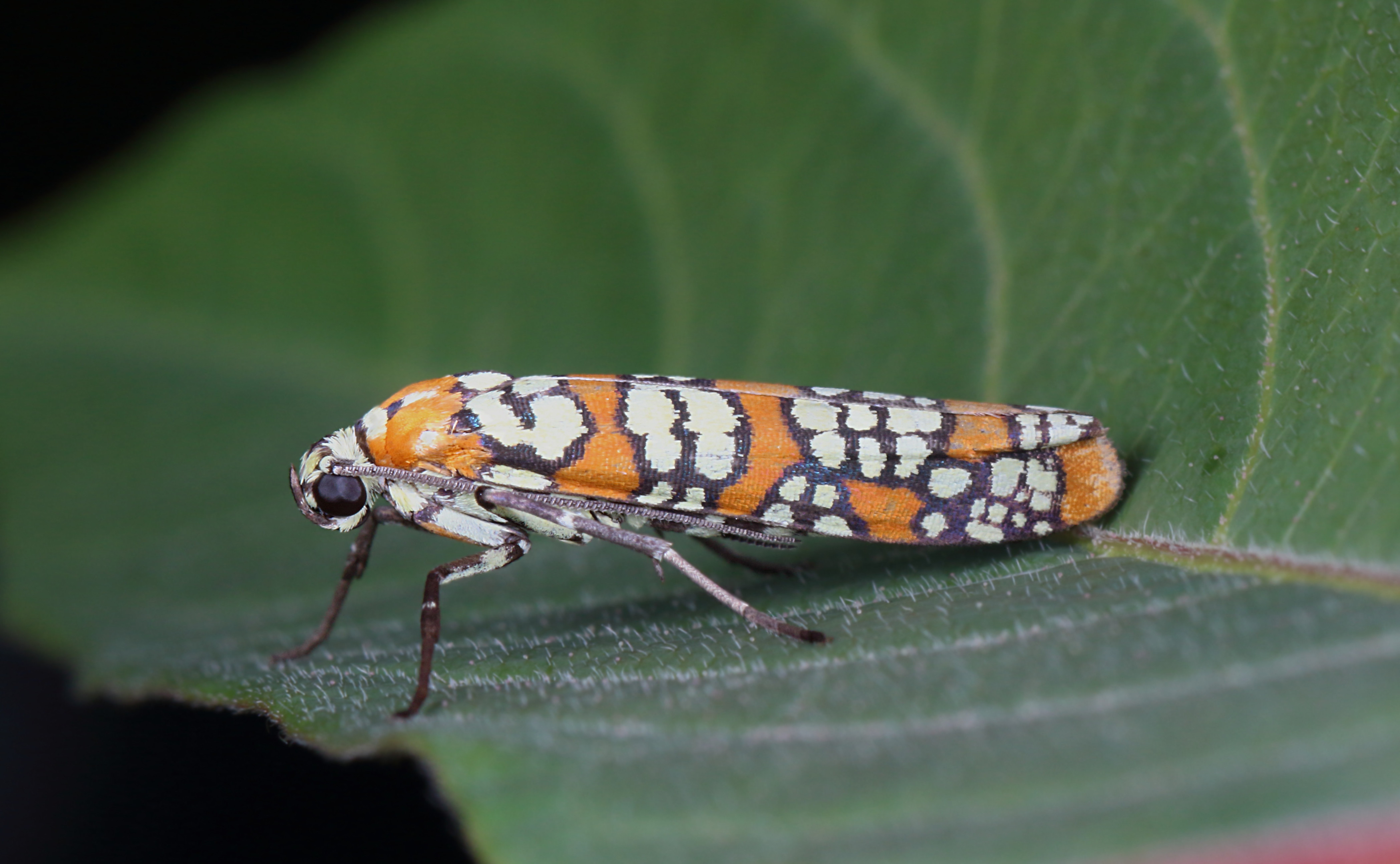 Next is a well known kind of arachnid commonly known as a harvestman or daddy-long-legs. This handsome male (Leiobunum vittatum) sports long and artfully shaped pedipalps, and the reason for them emerges in the story that follows. 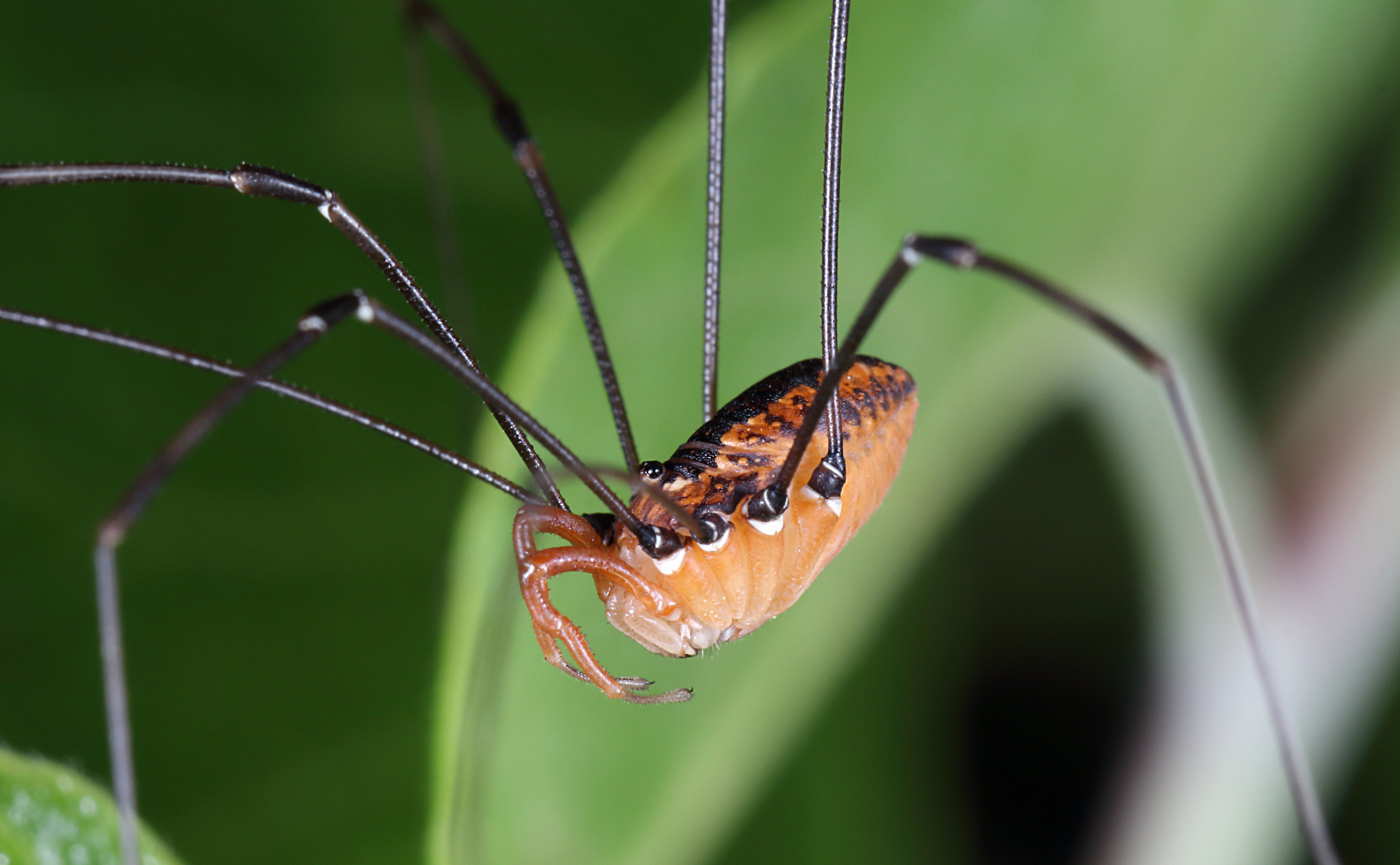 I often write about the Magic Field, but in fact this field is but a small part of a very large and very old park. In the main area of the park are enormous trees and ancient-looking but massive picnic shelters. A large stone and timber bridge crosses the river (it is the widely known Flint River) that bisects the park, and just over the bridge is a peaceful glen. Not even a quarter acre in size, this glen has given me more special finds than any other area save for the Magic Field.

I was just entering the glen late in the summer when I noticed a strange symmetrical shape sitting under a leaf of a red-bud tree next to the river. Closer inspection revealed a very good find, which was one of the larger species of slug caterpillars as shown in first pictures. This is the spiny oak slug caterpillar (Euclea delphinii). Slug caterpillars do not have well defined legs, so they crawl slowly with peristaltic waves under the body. This species has poisonous spines, and the bright colors are nature’s way of saying Do Not Touch. 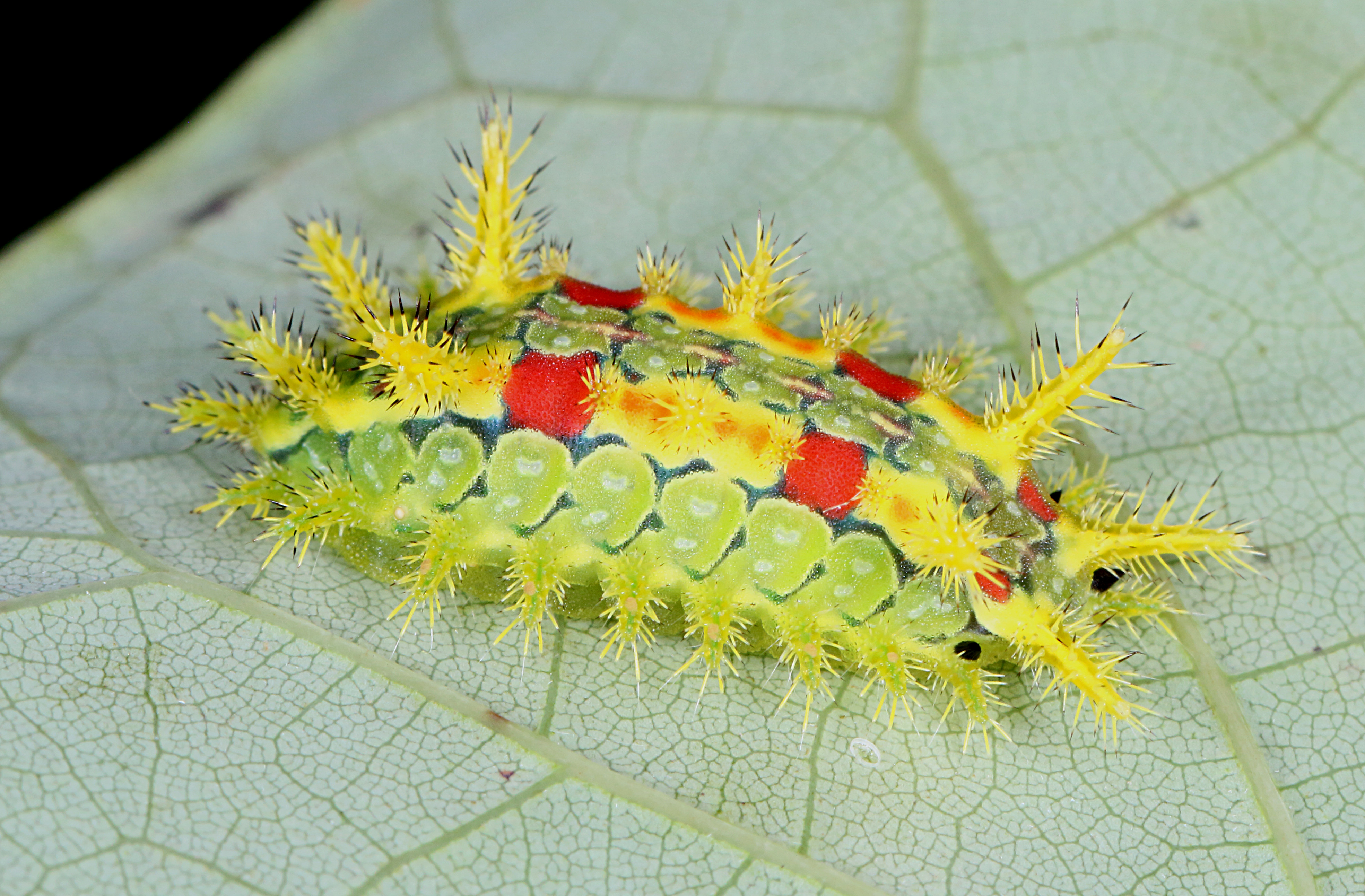 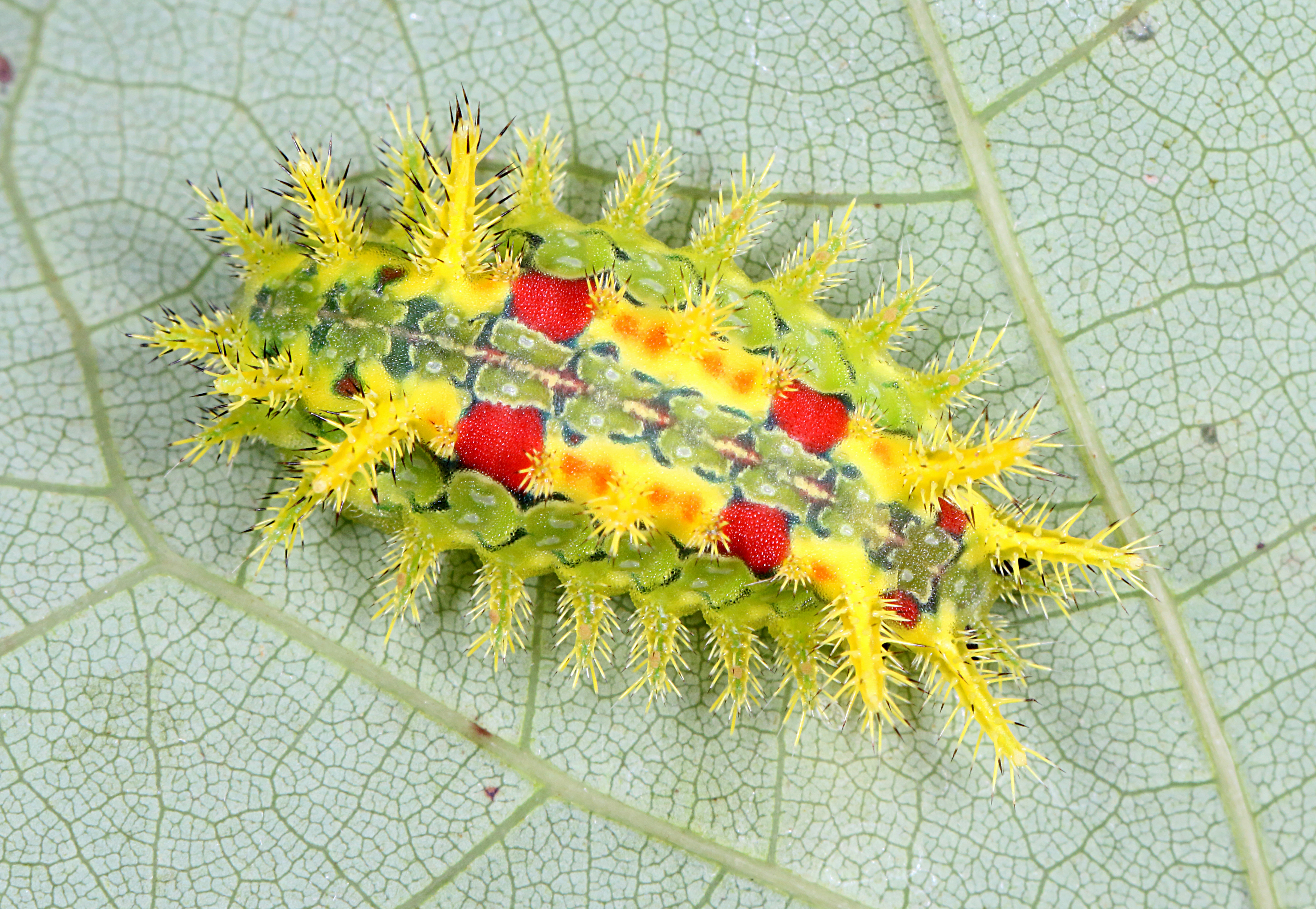 I had plucked off the leaf that it was on to take pictures of the caterpillar, but the lighting was not optimal in the full sun. There was a large log in the shade which was perfect for sitting, but at the moment a harvestman was trundling across the log and so I waited for it to make its way across. But then a second, leaner-looking harvestman rushed out and tackled the first one!  !!???  They rolled around briefly in a blur of tangled legs before settling out, facing each other in a close embrace. This was an attempt at mating! I have never seen the entire process in these arthropods, so the caterpillar was put down in order to take pictures of their liaison. 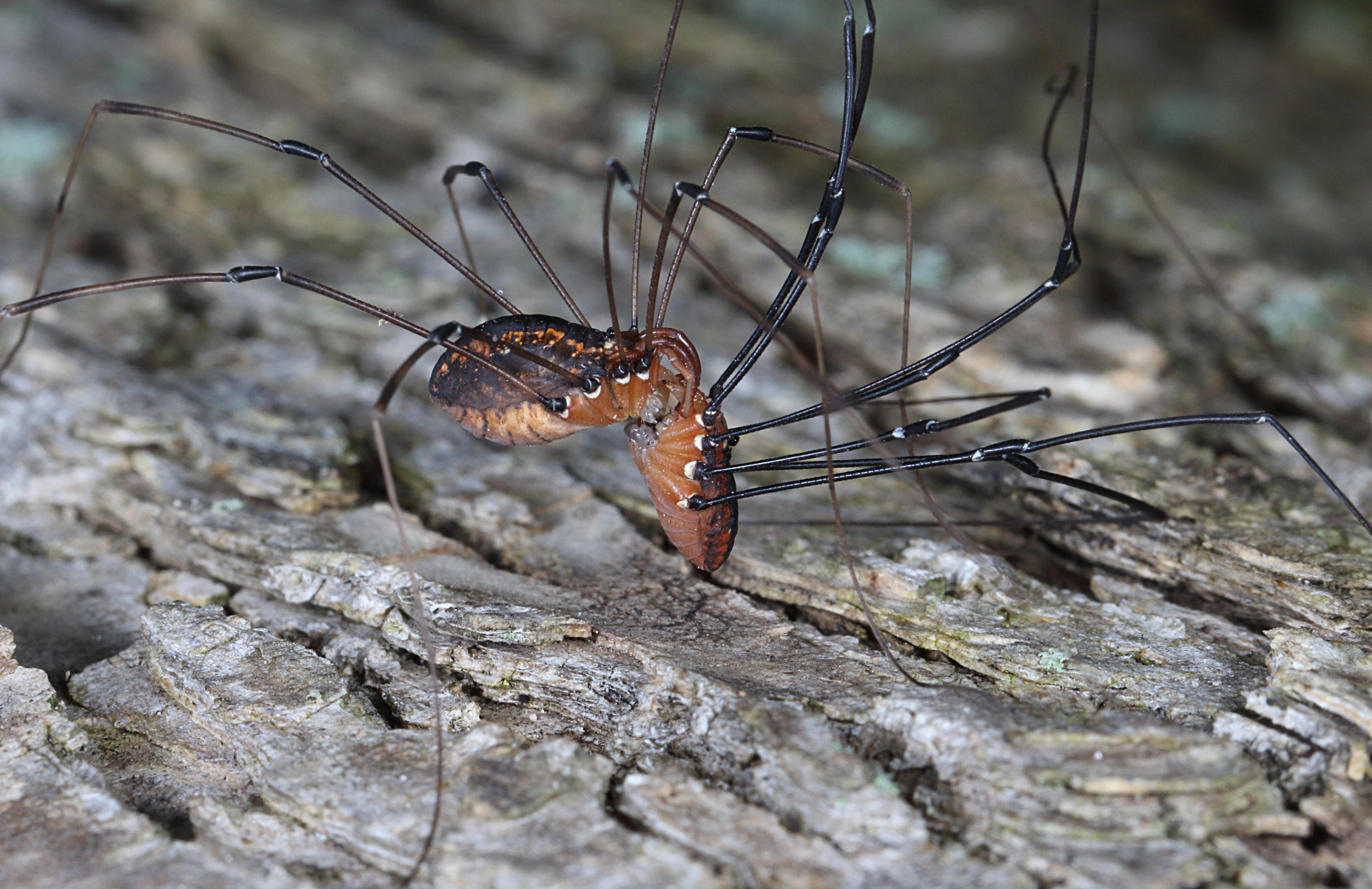 As shown in the next several pictures, the male (on the right) protrudes something weird. I suppose there is sperm transfer going on somehow. Note too the elongate pedipalps of the male that were mentioned above. They are being used here to enwrap the female in a specific way. The red thingy on the females bum is a parasitic mite. 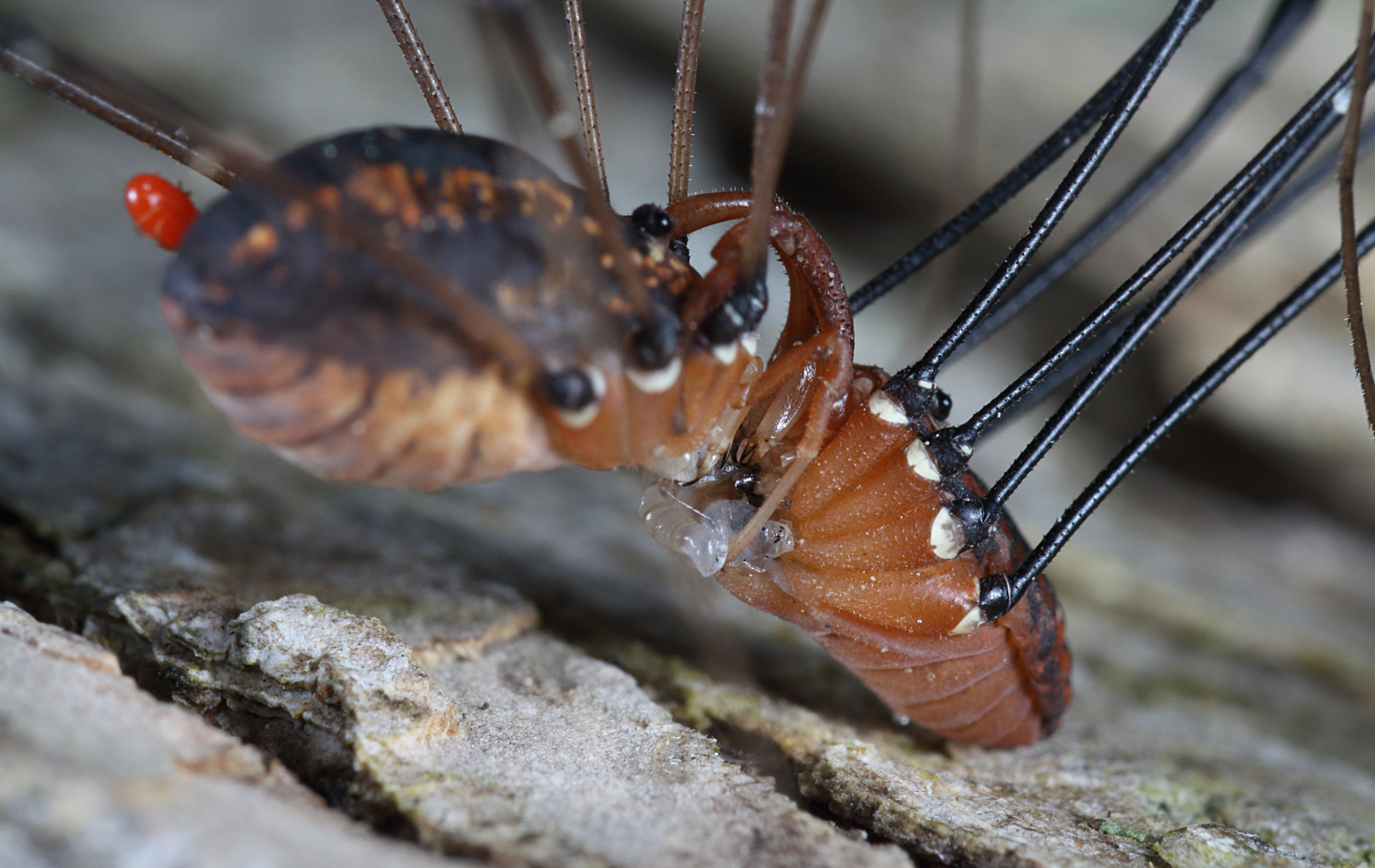 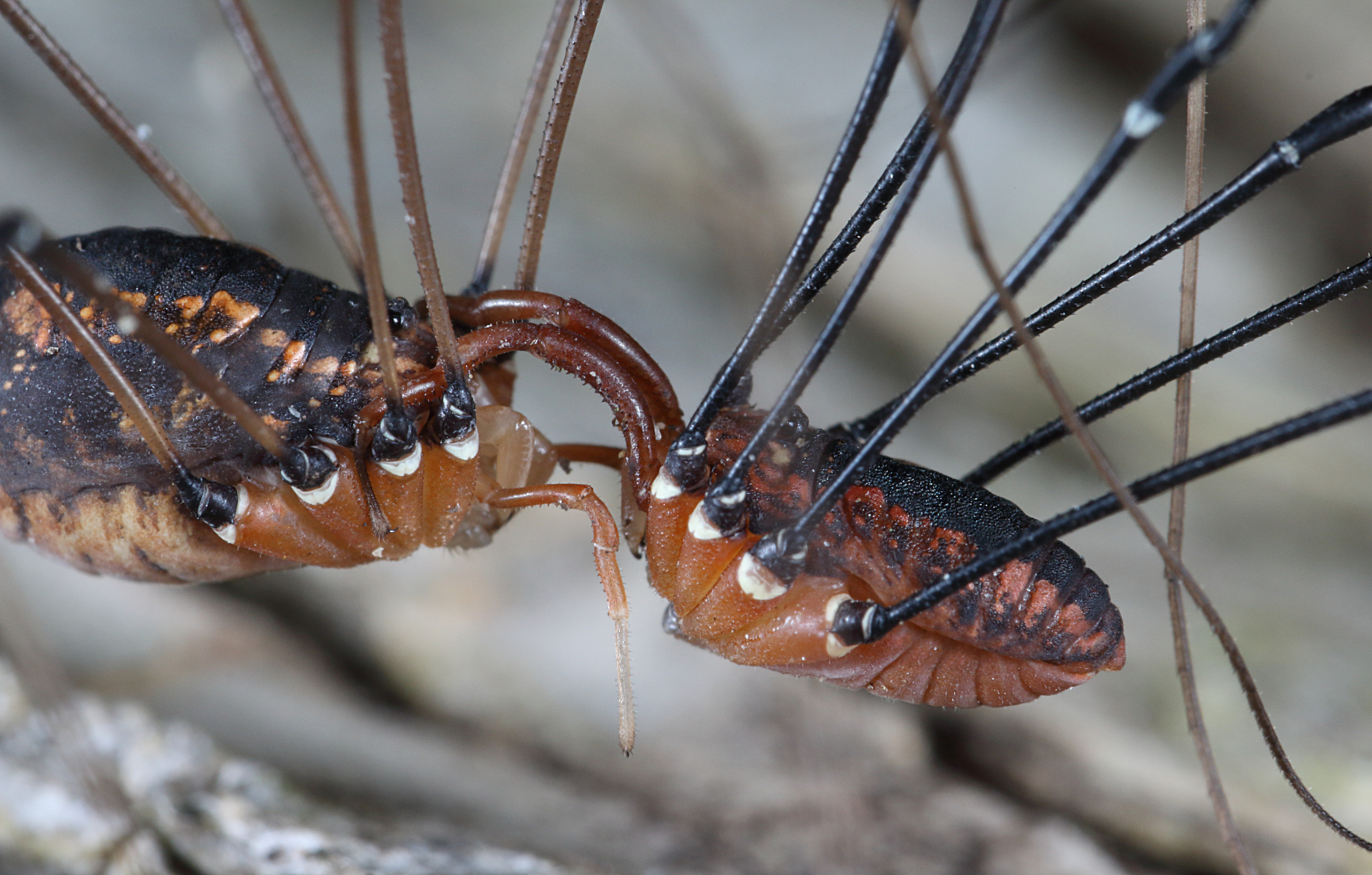 For these hi mag pictures, a Raynox 150 diopter lens was attached to the macro lens to boost magnification. Readers might be interested to know that this diopter lens is a flexible but also inexpensive way to convert a regular camera into one that can take closeup pictures. This is how this rewarding hobby can start.

After several minutes, the pair went their separate ways and I could claim the log for more caterpillar pictures, as shown below. The slug caterpillar was of course returned to its tree when I finished with it. 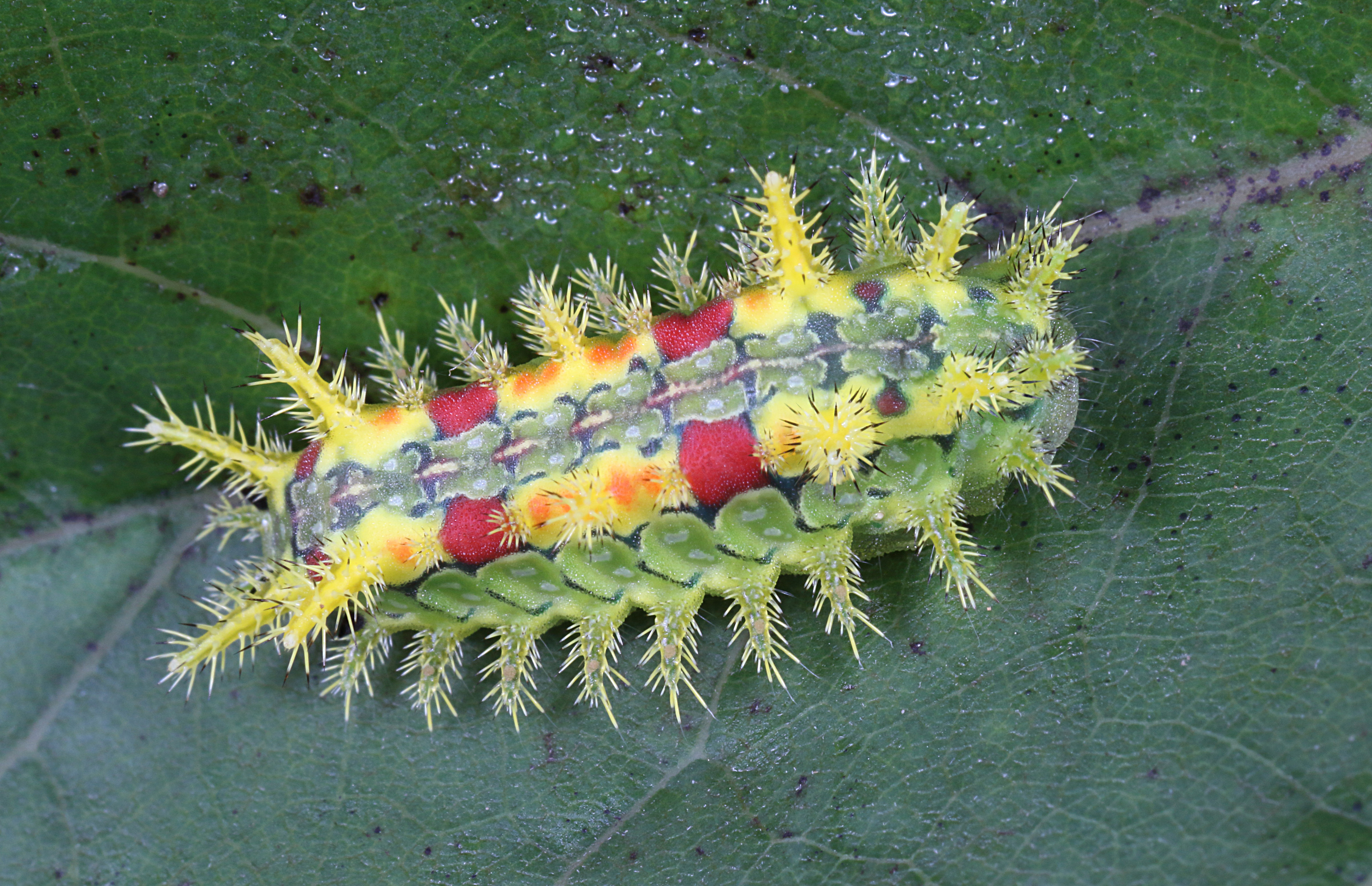