UPDATE: See this Twitter thread by the author for his hilarious interaction with the journal, including the “reviews”.

This paper, pointed out earlier today by my Chicago colleague Brian Leiter, highlights one of the scandals of scientific publishing: predatory journals that will publish anything, allowing researchers to inflate their c.v.s while the journal rakes in outrageous “publication fees.”

The upside is that the paper is fricking hilarious, and so transparently nonscientific that it’s amazing that even an abysmal journal would publish it. Perhaps they don’t care—perhaps all they want is the dosh. But this paper is the result. Click on the screenshot below to go to the paper. Download it quickly, for I have a feeling it will be gone soon. . .

(If it disappears, you can always get a pdf from yours truly.)

Behold: “What’s the Deal with Birds?” 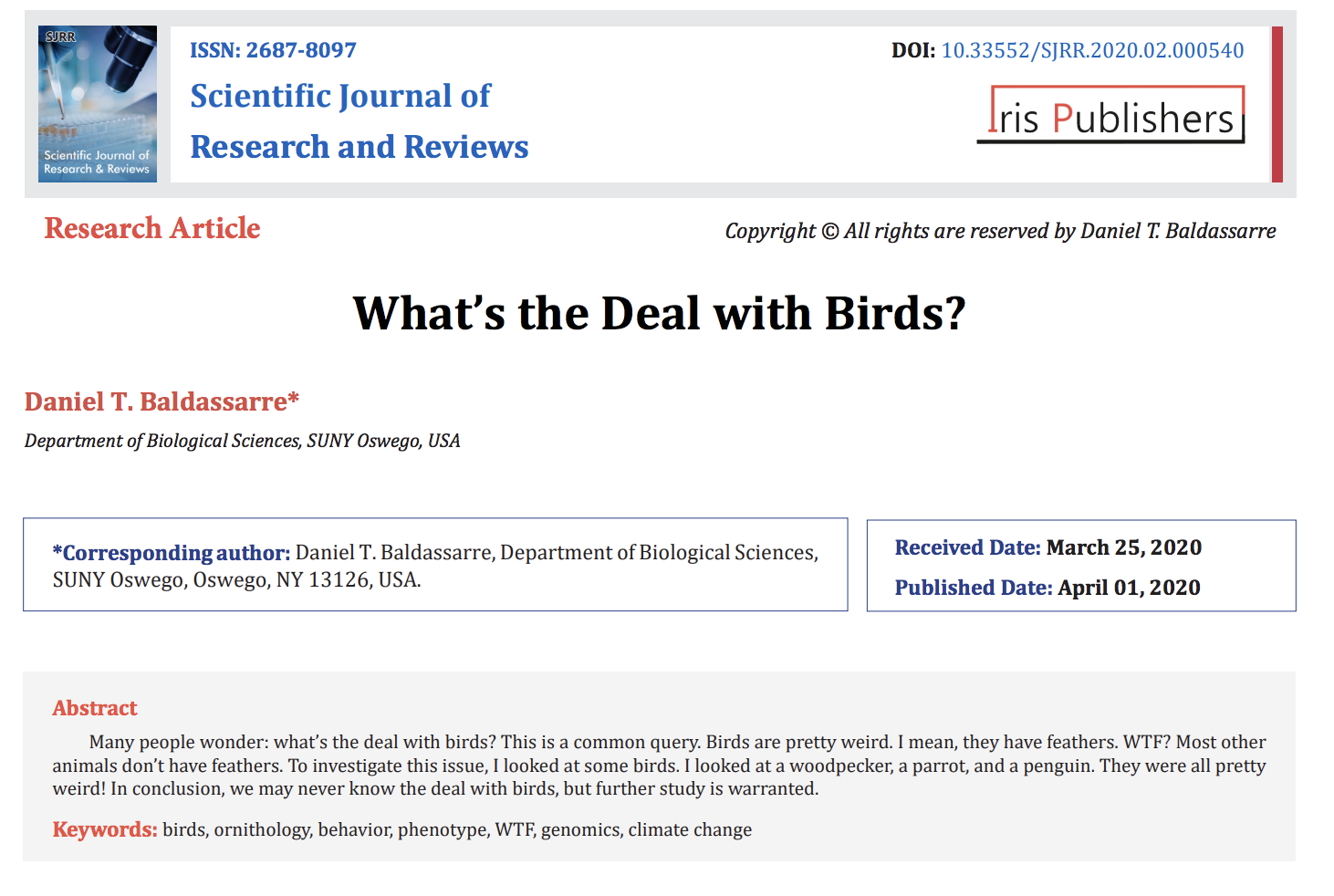 I mean, if the abstract and keywords don’t give it anyway, somebody’s asleep at the wheel:

Many people wonder: what’s the deal with birds? This is a common query. Birds are pretty weird. I mean, they have feathers. WTF? Most other animals don’t have feathers. To investigate this issue, I looked at some birds. I looked at a woodpecker, a parrot, and a penguin. They were all pretty weird! In conclusion, we may never know the deal with birds, but further study is warranted.

Remember, this is not a joke journal; it’s one that pretends to be serious. Here are a few tidbits (be sure you read the acknowledgments at the end of the paper): 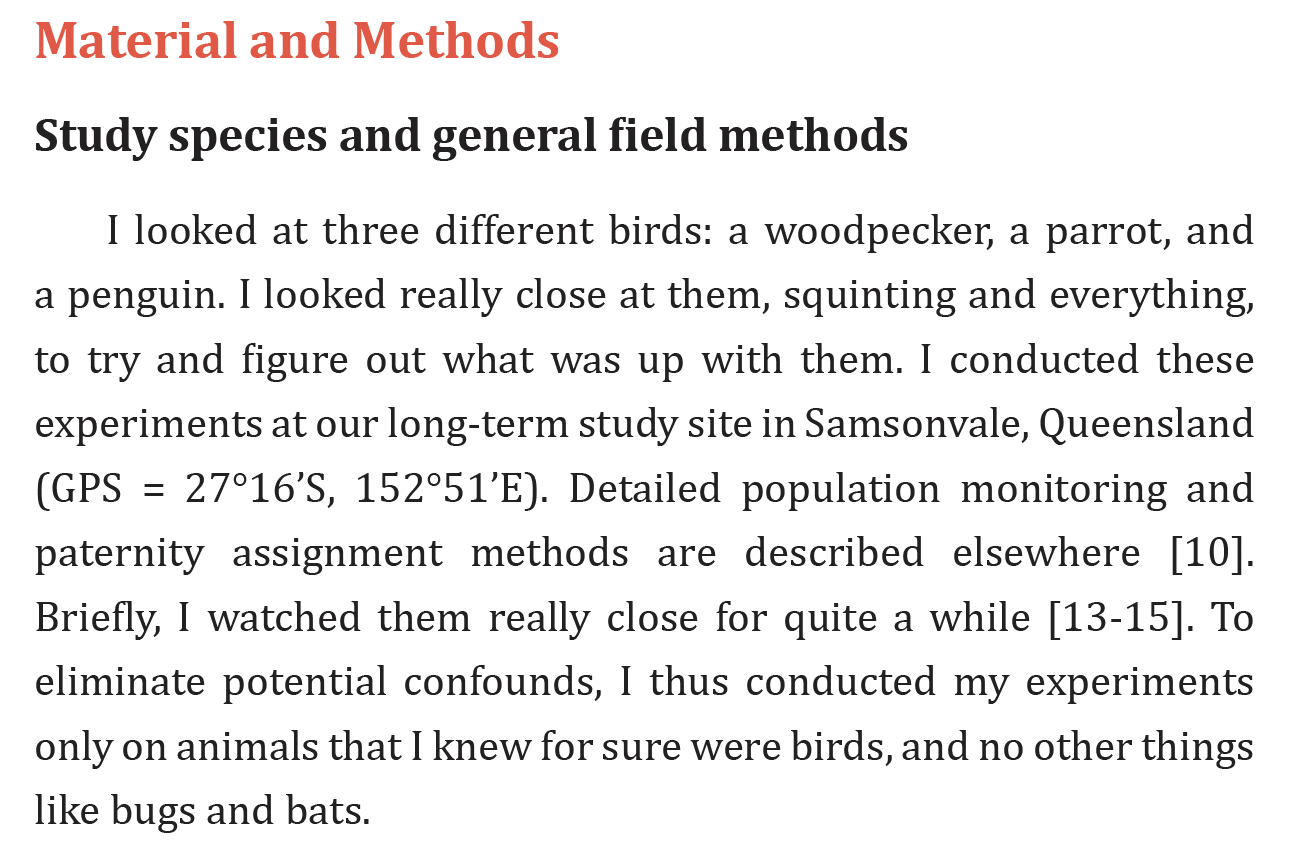 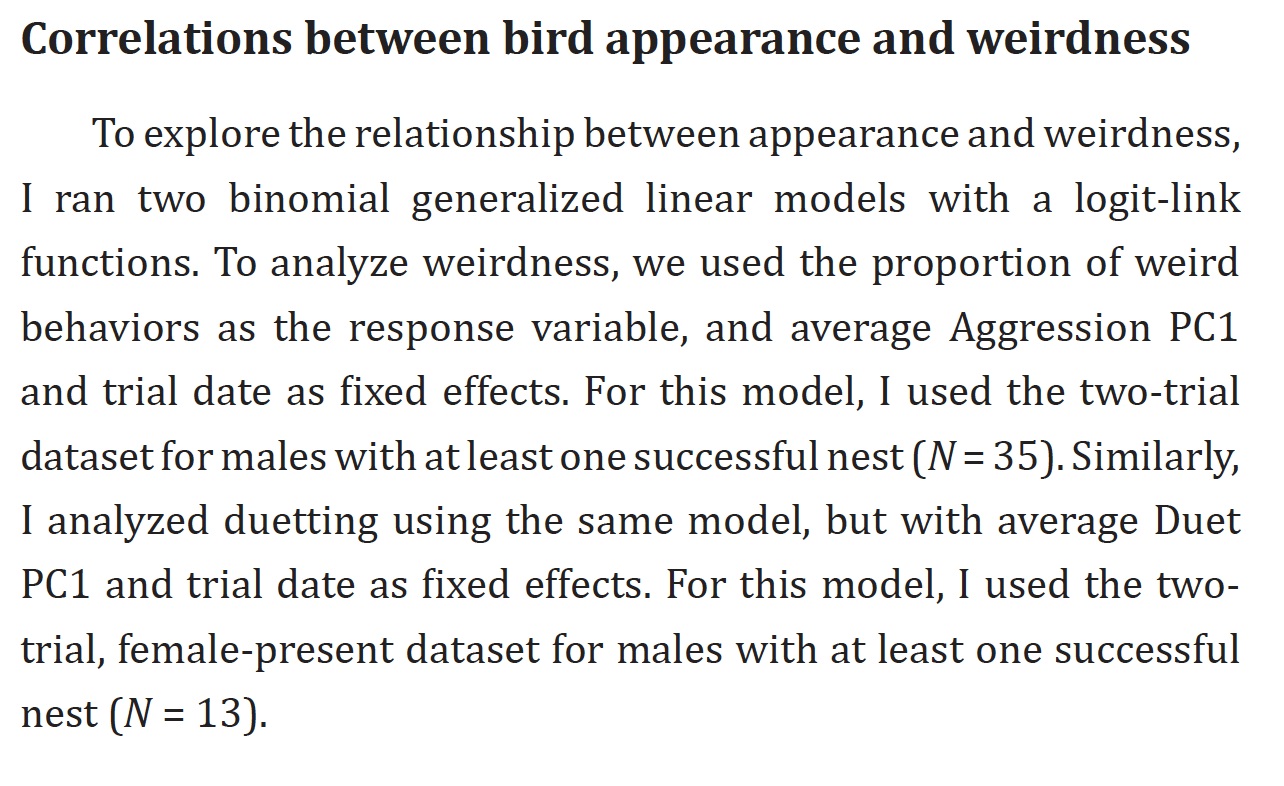 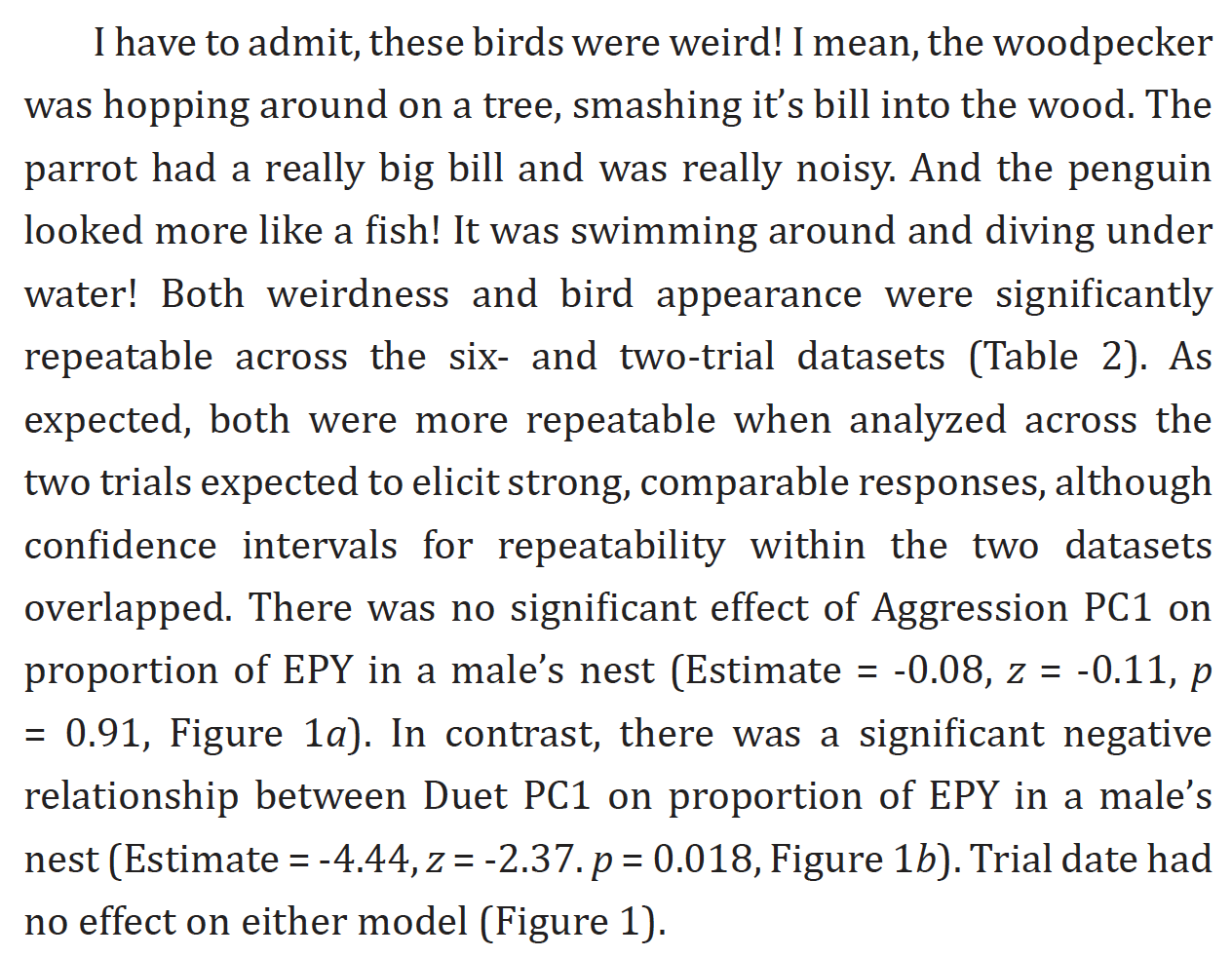 And Figure 1, which is lovely.  Remember, the journal is presenting this as peer-reviewed and solid scientific work (well, clearly this one wasn’t peer-reviewed as it was received March 25, and published April 1!). 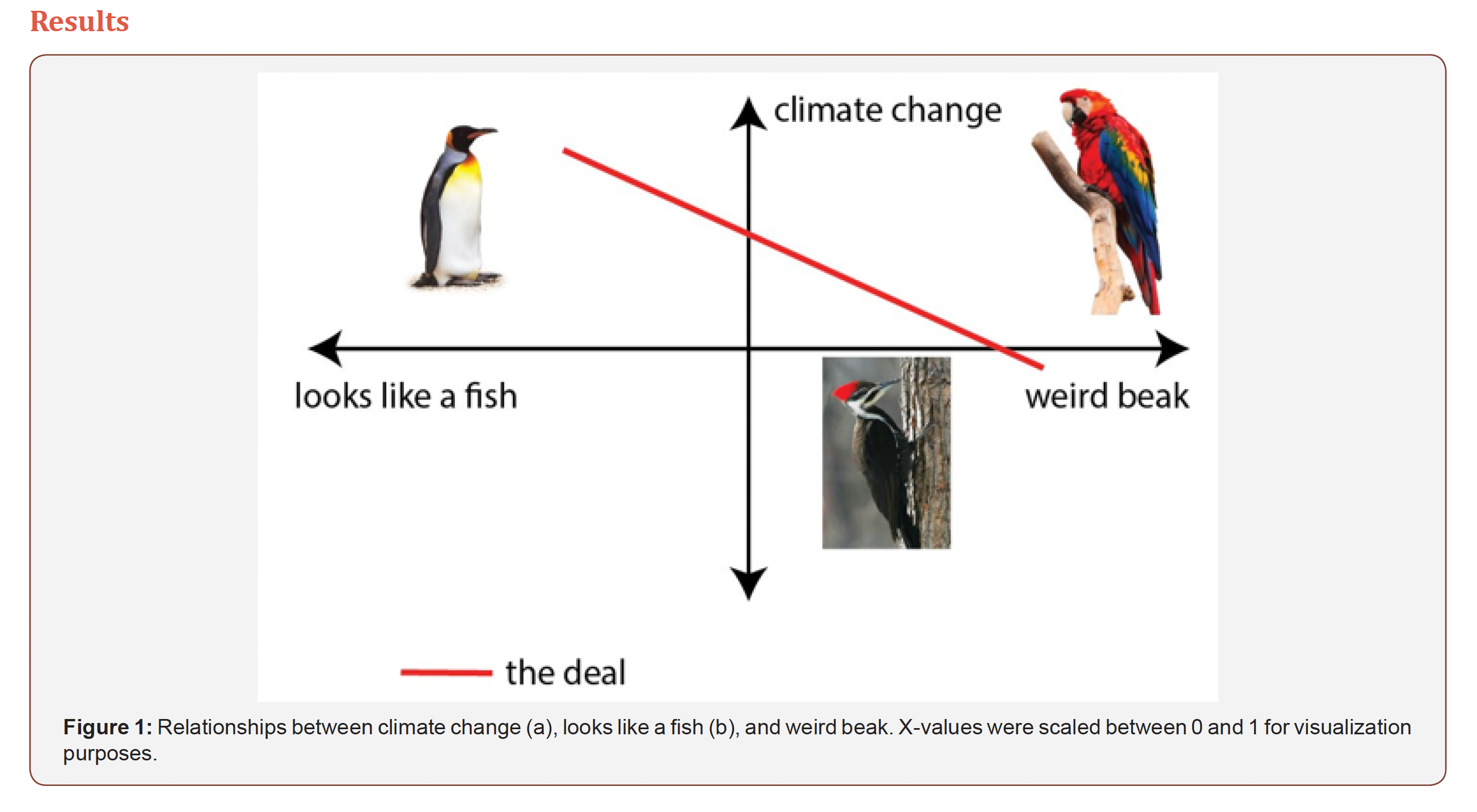 Given the publication date, could this be an April Fool’s paper? No, I don’t think so. The journal isn’t available through my library (of course), but the journal’s table of contents, which you can see, gives no indication that the paper is a hoax. Instead, the journal appears to be a repository for crap papers in all sorts of fields from authors all over the world. In fact, I just saw on Twitter this note from another biologist, Andrew Burchill, that Baldassarre telegraphed his intentions before he submitted “What’s the deal with birds?”.  (Note that, in my own tweet, the hoax paper was regarded as “sensitive content”!):

I saw a tweet by the author before he submitted to the journal: he was tired of getting so much predatory journal spam, so he decided to go for it!

Greg did a bit of Googling and came up with what’s indented below:

Here’s the link to the publisher’s website– it’s a real hoot!
https://irispublishers.com/index.php
A statement of “Publication Ethics”!!
It’s not written by a fluent English-speaker. A sample sentence:
We want the outcome of integrity meeting integrity to be compounding source of factual information that will help the world become a better place.
And this (I suspect it’s the opposite of what they intended, but it’s nonetheless oddly fitting.):
Authors should ensure that the manuscript they’ve submitted to us should be under review anywhere else.

They claim to be based in San Francisco. I wouldn’t put money on it.

Science is loaded with these kinds of predatory journals; I get invitations to publish in them all the time, often in journals way outside my field, like microbiology or even obstetrics! Maybe if scientists kept loading them up with hoax papers like this one, it would hasten their demise.

By the way, the author’s name, Daniel T. Baldassarre, sounds like a hoax name, too, but he’s a real biologist, an assistant professor of zoology at the State University New York at Oswego, as he correctly notes in the paper’s header. (I’ve put his photo below).

One final remark. In the “grievance studies affair“, Helen Pluckrose, James Lindsay, and especially Peter Boghossian got into big trouble for “hoaxing” humanities journals with equally ludicrous papers.  Baldassarre won’t get into trouble (and shouldn’t), for his paper is in a clearly predatory journal.  But what’s the difference between a predatory scientific journal that will publish nonsense and humanities journals like Fat Studies or Gender, Place & Culture that publish nonsense but also purport to be venues for serious research? In effect, they both do the same thing: help researchers fatten their c.v.s with worthless research. Why should Boghossian et al. be excoriated for exposing the same kind of crappy journal standards that Baldassarre did?

Anything that exposes this kind of academic garbage, including clear hoax papers, is to be applauded, so long as the hoaxes are revealed (as they were with the Grievance Studies Trio) or are so palpably ridiculous (as with Baldassarre’s paper) that they couldn’t be anything other than a hoax.

74 thoughts on “Hoax: a crazy hilarious paper in a predatory journal”