It’s Thursday, April 9, 2020, and National Chinese Almond Cookie Day—pure cultural appropriation given that the cookie is native to China. It’s also National Winston Churchill Day, but he was neither born nor died on April 9. This date is celebrated because it was on April 9, 1963, that President John F. Kennedy made Churchill an honorary citizen of the U.S. (Churchill was not at the ceremony, but was still alive: he died in 1965.) For those of you in quarantine, be aware that it’s National Gin and Tonic Day.

Further, it’s the Christian holiday of Maundy Thursday. What is “maundy”? Well, it refers to the myth that on the Thursday before Good Friday, Jesus washed his disciples’ feet:

There are two possible sources of the word “maundy.” The main one says it is from the Latin word “mandatum,” which means “commandment.” The word was used in a phrase that Jesus spoke while he washed his disciples’ feet. [Note that Jesus didn’t speak Latin!] On Maundy Thursday, mandatum ceremonies take place in the Catholic Church, as part of Mass or separate from it. During them, a bishop usually washes the feet of twelve people from the community, just as Jesus washed the feet of his disciples. Other denominations besides the Catholic Church also participate in the washing of the feet.

The second theory on the name “maundy” says that it derives from “maundsor baskets” or “maundy purses.” The king of England would traditionally give these out to the poor before attending mass on the day. They were named as such because the Latin word “mendicare” means to beg. Some dispute this interpretation as a reasoning for the name of the day.

This evening is also the start of Passover, which will end on April 16 and thus overlap with Easter.

Today’s Google Doodle continues the two-week thank you to coronavirus helpers. Today’s Doodle thanks those who work in sanitation; click on the screenshot to see the links

News of the Day: Dreadful, as usual, but people are beginning to see glimmers of hope. As a pessimist, I want more evidence. In the meantime, the death toll from the coronavirus in the U.S. has risen to 14,802 in the U.S. and 88,538 throughout the world. New unemployment figures will be released today, and they will show millions more Americans out of work; this will only grow since just this week Florida and Texas, with 15% of the nation’s payroll, decided to close nonessential businesses. Troubles as numerous as poppy seeds. . .

Stuff that happened on April 9 includes:

And I present you that recording as a gift!

This was a scandal to all right-thinking people.

Anderson was refused by the DAR because they were all white and didn’t want a black person integrating Constitution Hall (note the irony of that name). Read more about this infamous event here.

Upon hearing what the DAR did, Eleanor Roosevelt resigned from the organization and arranged for the Lincoln Memorial concert. Here’s a six-minute PBS report (with scenes) on that concert, its antecedents, and its aftermath, an antecedent to Martin Luther King’s famous speech at the site.

If ever I could have a theologian as a hero, it was Bonhoeffer, who opposed and public defied Hitler, and was hanged for it—only two weeks before the Allies liberated the Flossenbürg concentration camp where he was held.  Here’s an 8½-minute documentary about Bonhoeffer’s resistance to Hitler:

Kane specialized in photos of fashion and rock musicians. Here’s one of an uncooperative Bob Dylan, whom he cornered on a Los Angeles rooftop:

Here’s a tweet found by Matthew about Lehrer’s birthday:

Those who decamped from life on April 9 include:

Meanwhile in Dobrzyn, as Malgorzata explains, “Hili is anxious about the pandemic. There may be shortage of cat food!”

Hili: Flowers do not worry about anything.
A: And you?
Hili: I’m enjoying the spring but there are reasons for anxiety. 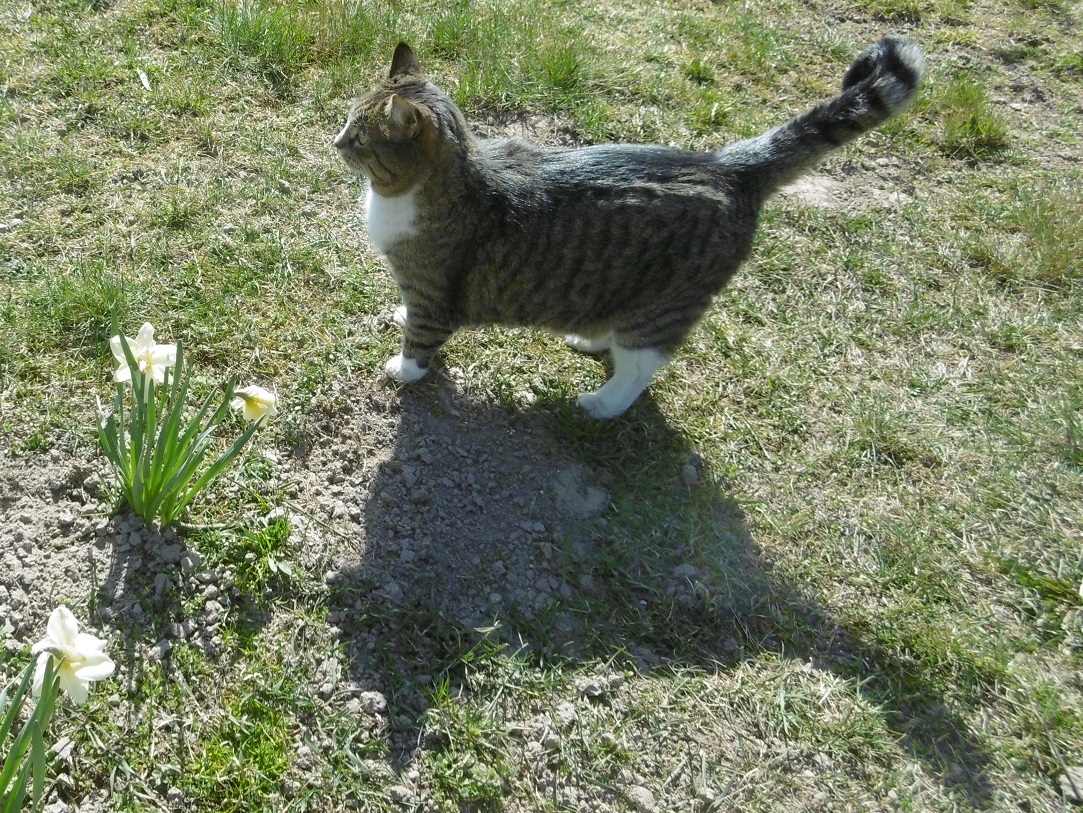 Via Muffy, a cartoon by Pat Bagley in The Salt Lake Tribune. Title: “Playing Doctor”: 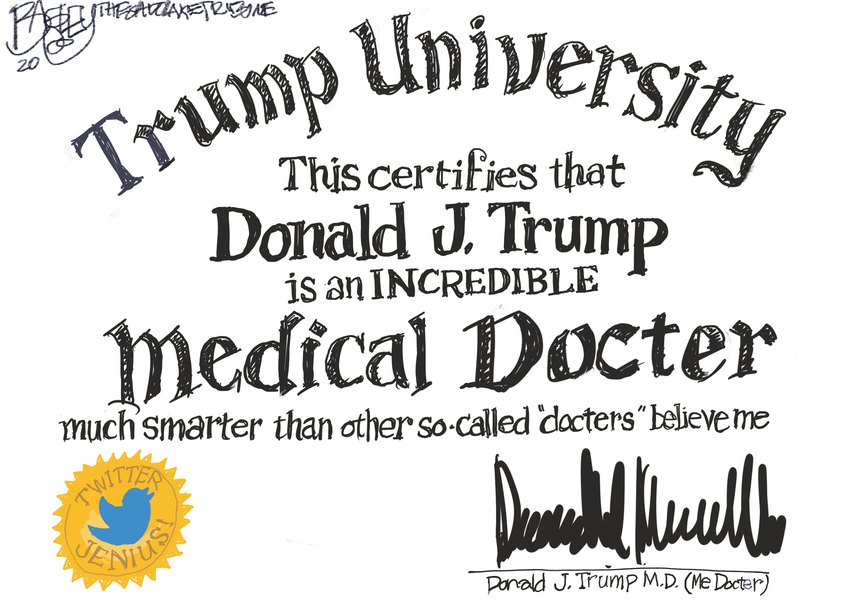 From Cats in Art: 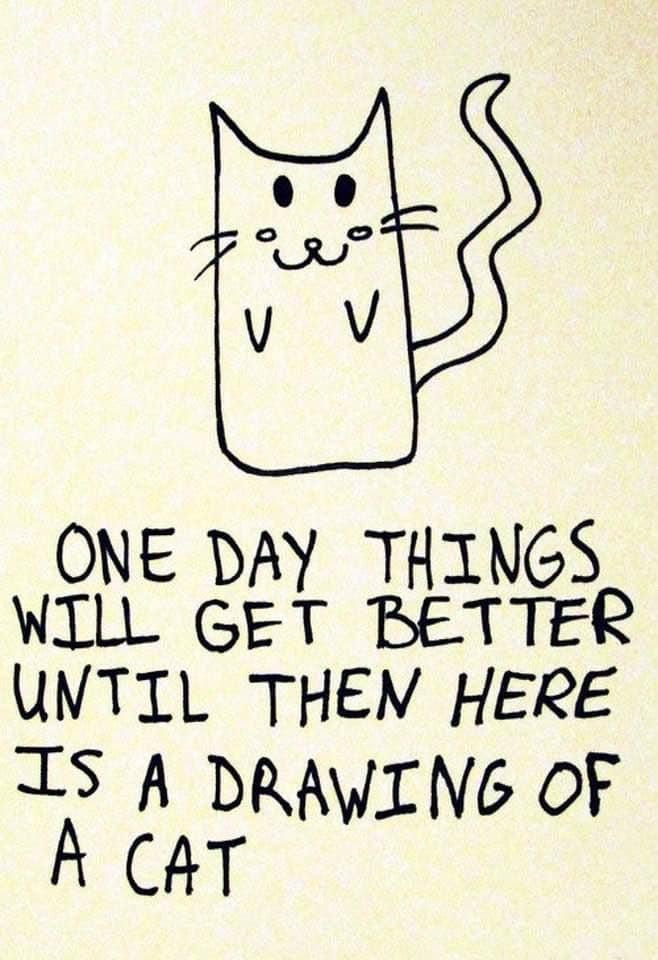 And a social-distancing cat from reader Lawrence: 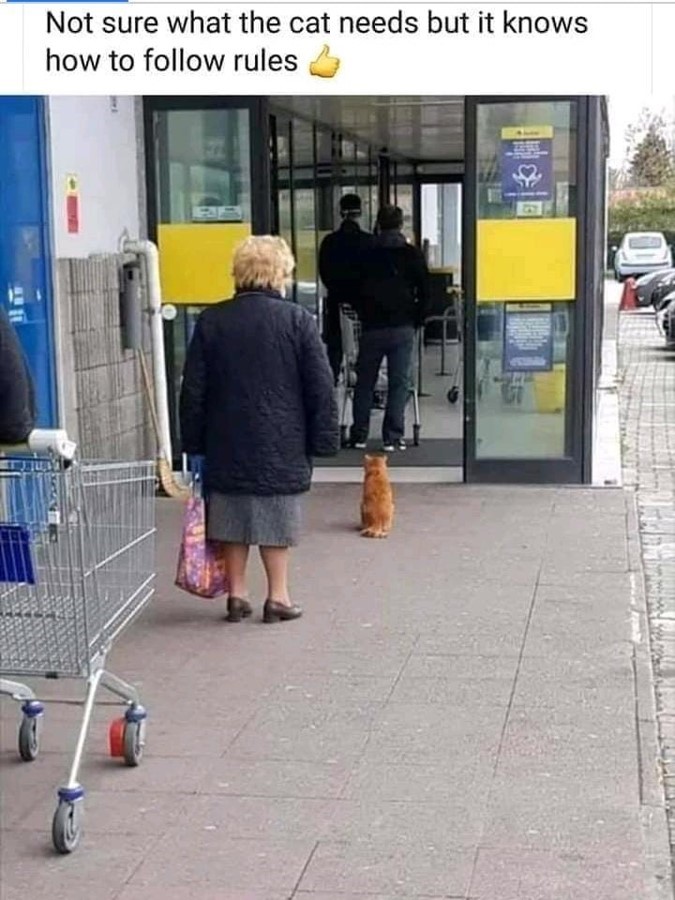 From Titania. Give me a break: the virus discriminates? No, there are presumably racial differences, based on culture and oppression, that influence susceptibility to infection. I didn’t even realize that people would use the pandemic to leverage identity politics—and at a time when we should be pulling together as humans. If you want to read Hirsch’s article, it’s here.

All this time we’ve been wasting looking for a "vaccine", it turns out we should have been campaigning against the coronavirus for its discriminatory and racist infection practices. #CoronavirusIsRacist #CancelCOVID19 #NotMyVirus pic.twitter.com/rNqJ1XrUJV

From Barry. This is certainly dubbed, but it’s still funny. And it’s not a badger!

This is a very very bad badger pic.twitter.com/d6UsSHhJmW

From Muffy. Capybaras are so phlegmatic, even letting themselves be groomed by mallards:

Where once I was dishevelled, now I am shevelled, thanks to ducks. pic.twitter.com/rgPKcR0PJv

What ever happened to Neil Diamond? Well, he’s in lockdown with the rest of us, but still making music. Here, “Sweet Caroline” gets some new lyrics:

A Queen Meme: Going where no Queen has gone before. There are other versions of her clothes at the link.

I am keen on the greenscreen Queen.https://t.co/aKm2Klek3o

This truly is RAD! What are the chances?