The two hens, Honey and Dorothy, are now firmly sitting on their nests and incubating eggs, and so we’ll count April 6 as Day 1 of the 28-day incubation period. That means the ducklings will hatch and leap from the windowsill around May 3, allowing a little leeway, and we’ll have to have the ground prepared by then. I’m especially concerned about Honey, who’s unwisely nested on ledge 2½ stories above the ground, on the wrong side of the building (not facing the pond), and with a cement porch directly below her nest. Facilities and I will ensure that they have a soft landing spot prepared.

Here’s Honey on her nest (arrow): 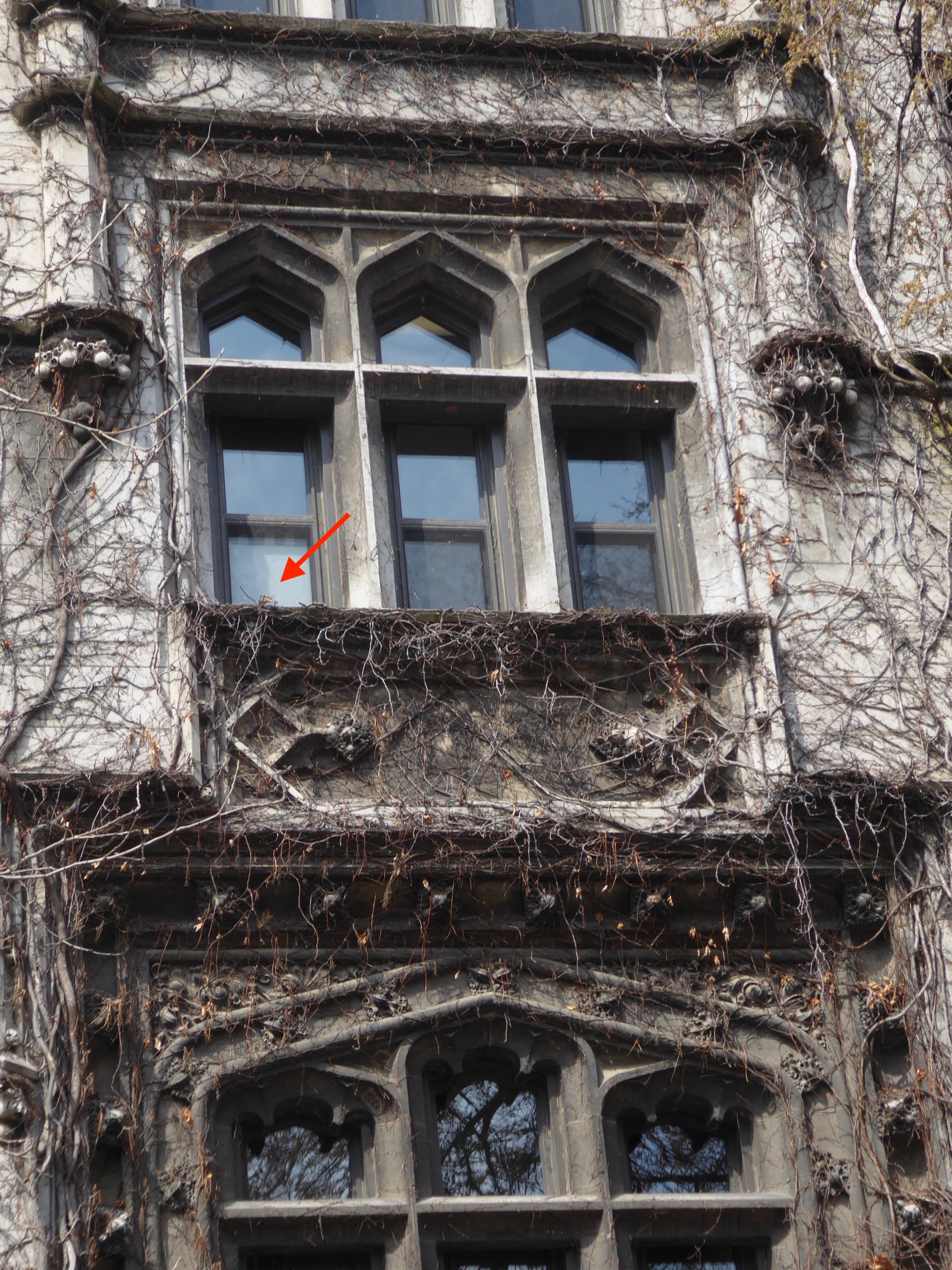 The best view I could get a few days ago with my point-and-shoot zoomed to the max: 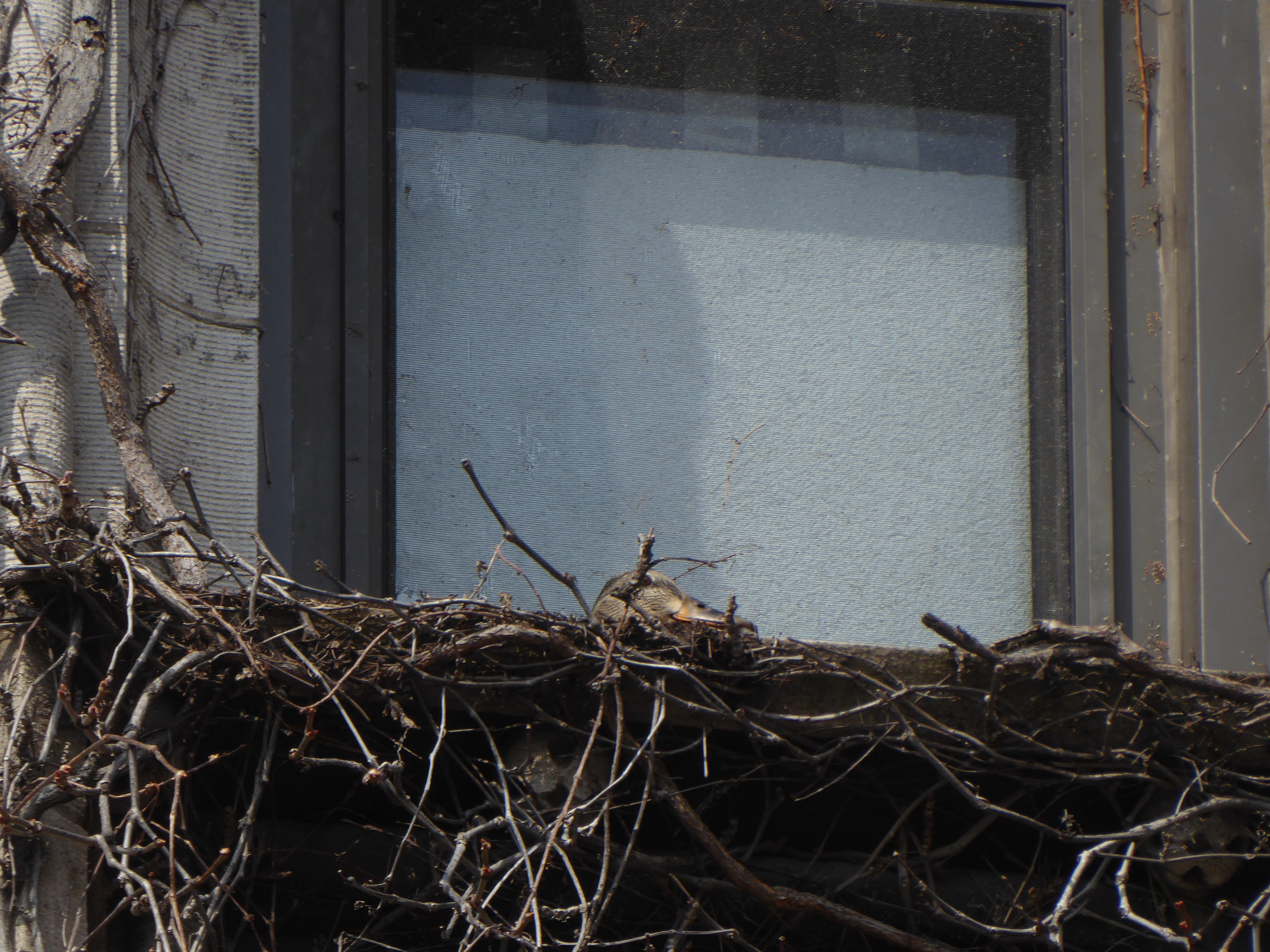 A view from the inside. She’s not going to move for four weeks, except perhaps to get a drink or a nibble. I watch the pond to see if she’s there, but I haven’t seen either hen on the pond in three days.  They are great mothers! 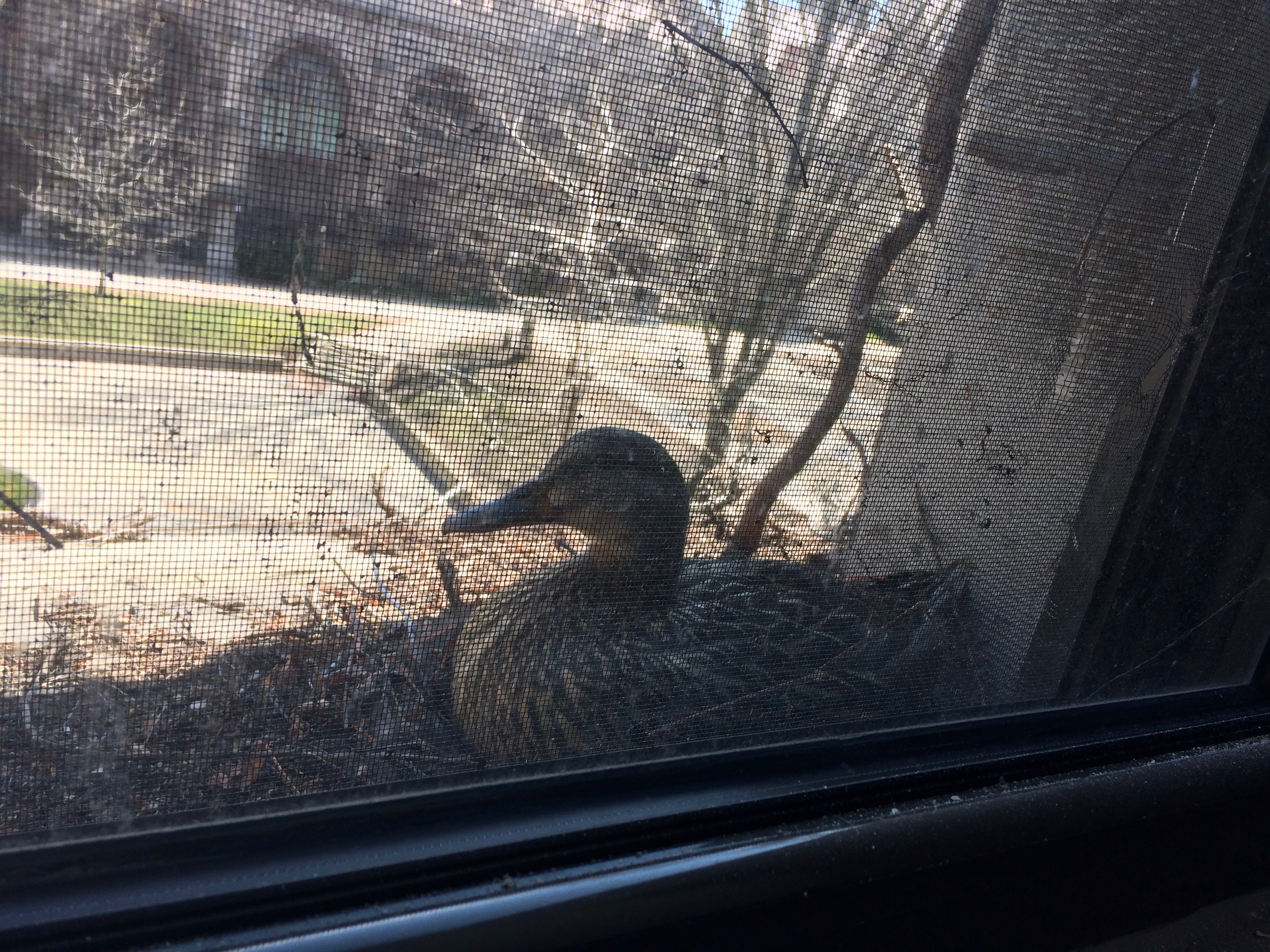 Dorothy on her nest on the third-floor ledge on the pond side of the building (her head is just visible in the lower right corner of the leftmost window). There’s some some grass and vegetation on the ground below the nest, but also cement, and the strip of land is narrow. We’re also working on that: 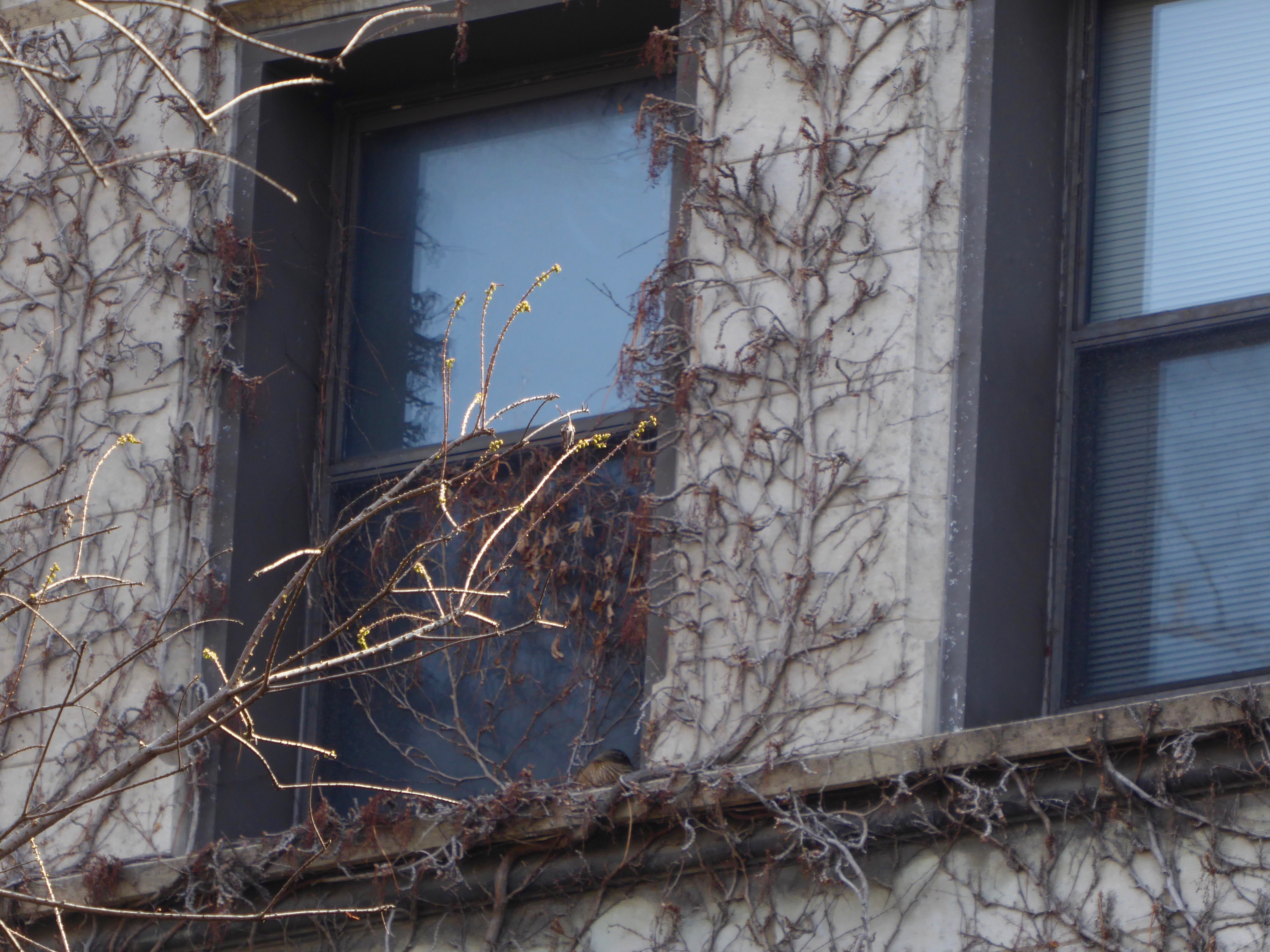 This is a Google Earth view of where the nests are relative to the pond (south is to the top, north to the bottom).  The building is Erman Hall, and the pond is obvious to the right. Honey’s nest is the circle to the left. As you see, to get to the pond on the other side of the building, her duckings have to either head south go around the building, and enter the pond squeezing through a rail fence—or (much harder), head north, climb steps cutting through a breezeway connecting Erman to the Zoology Building on the north (my building), and then descend steps to the pond. I don’t think the newly hatched ducklings can mount those steps, so there’s only one good route—the South Col. Is Honey savvy enough to take it? I worry about that.

Dorothy’s nest, on the other hand, is the circle on the right (west) side of the building, and her ducklings have a straight shot to the pond after they jump: 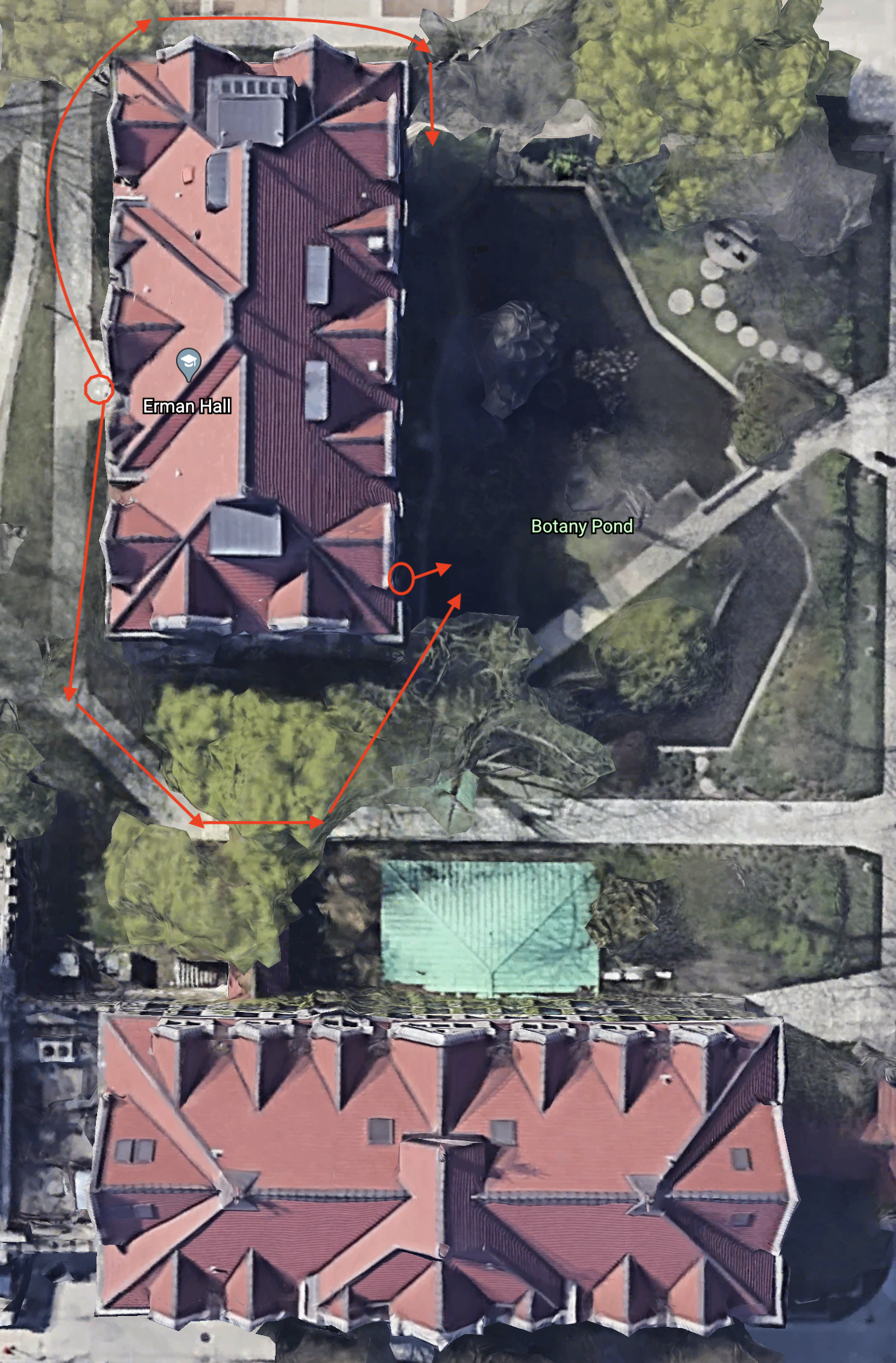 Putting aside my anxieties (duck farming is tough!), here’s the trio preening on the pond after lunch on April 5—the last day before Honey sat tight. The day after that Dorothy sat tight. Now only Wingman is left, along with some vagrant drakes. Note that they oil up their bills from a special gland (the uropygial gland) at the base of their tail, and then spread the oil over their feathers. That’s how ducks make themselves waterproof.

Here’s a diagram of where that gland is, as well as other features that help ducks float, taken from howstuffworks: 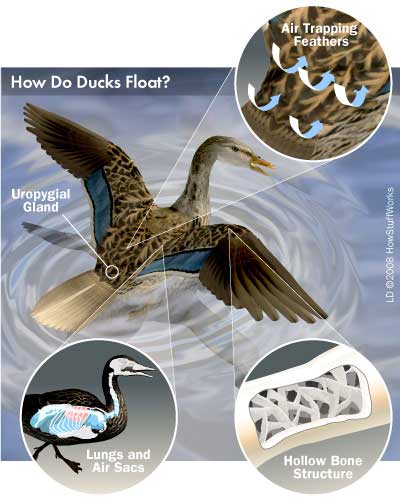 Two photos of Honey eating. The pellets are Mazuri Waterfowl Maintenance chow, their staple food, which I supplement with corn and mealworms): 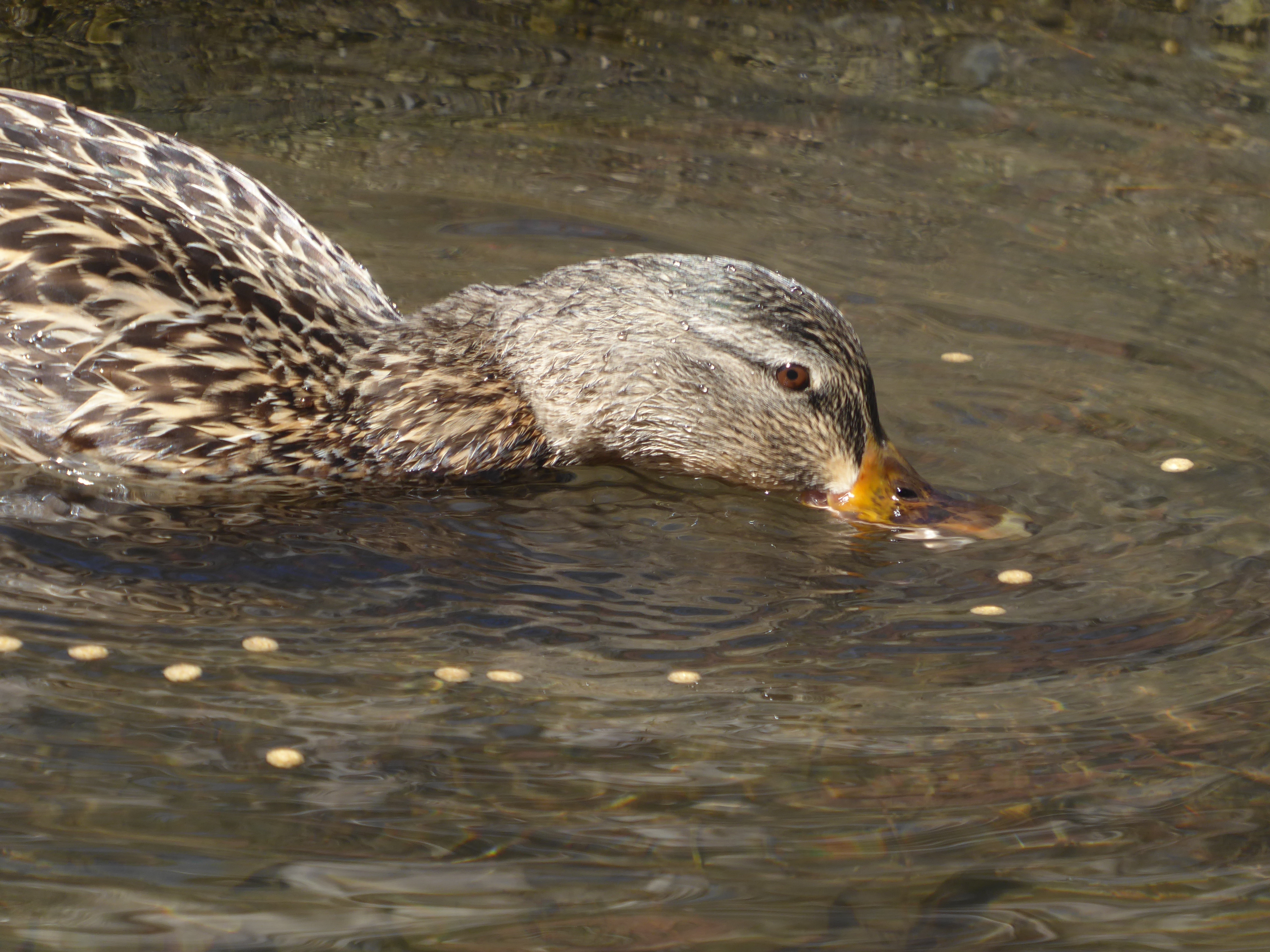 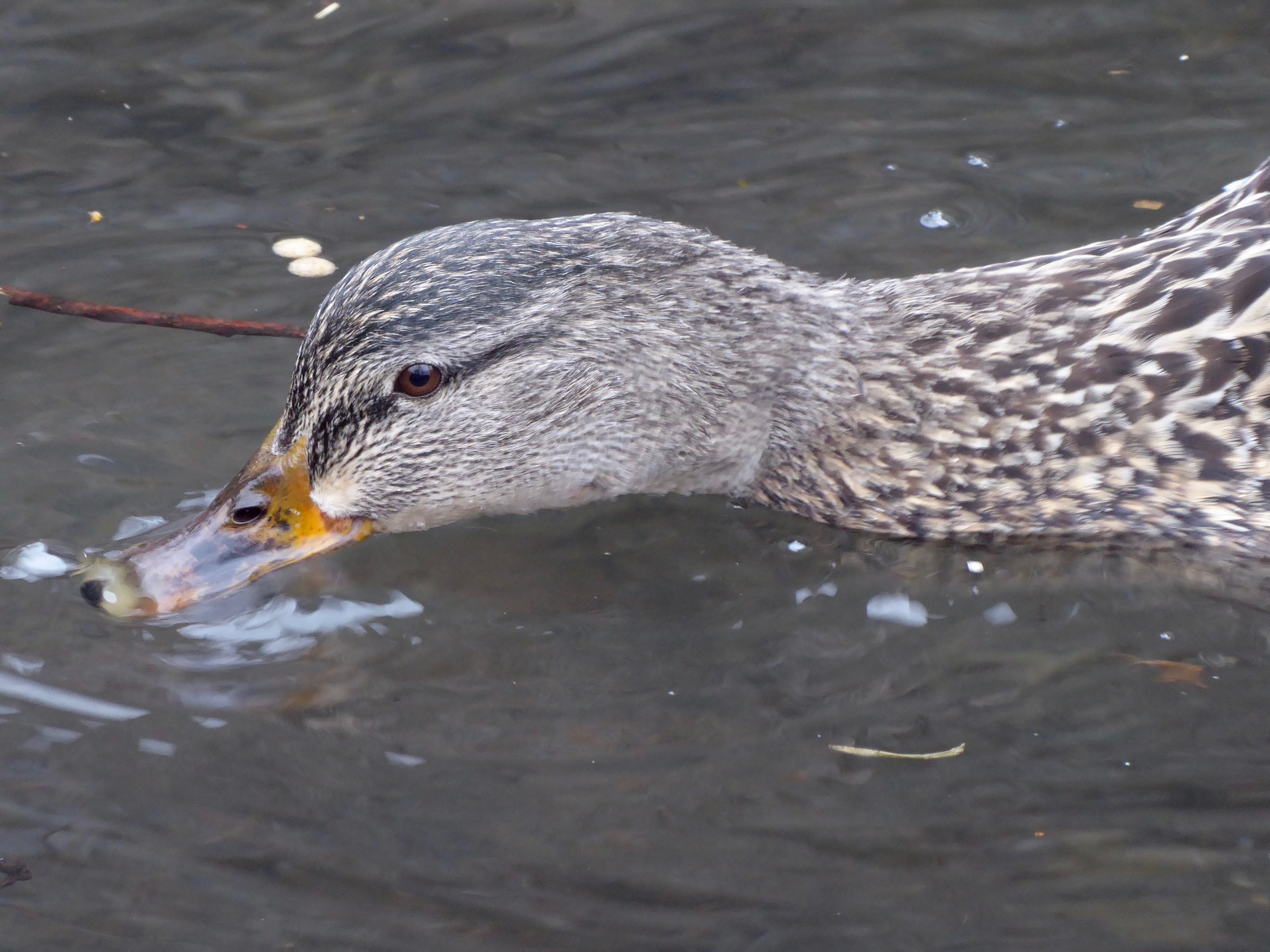 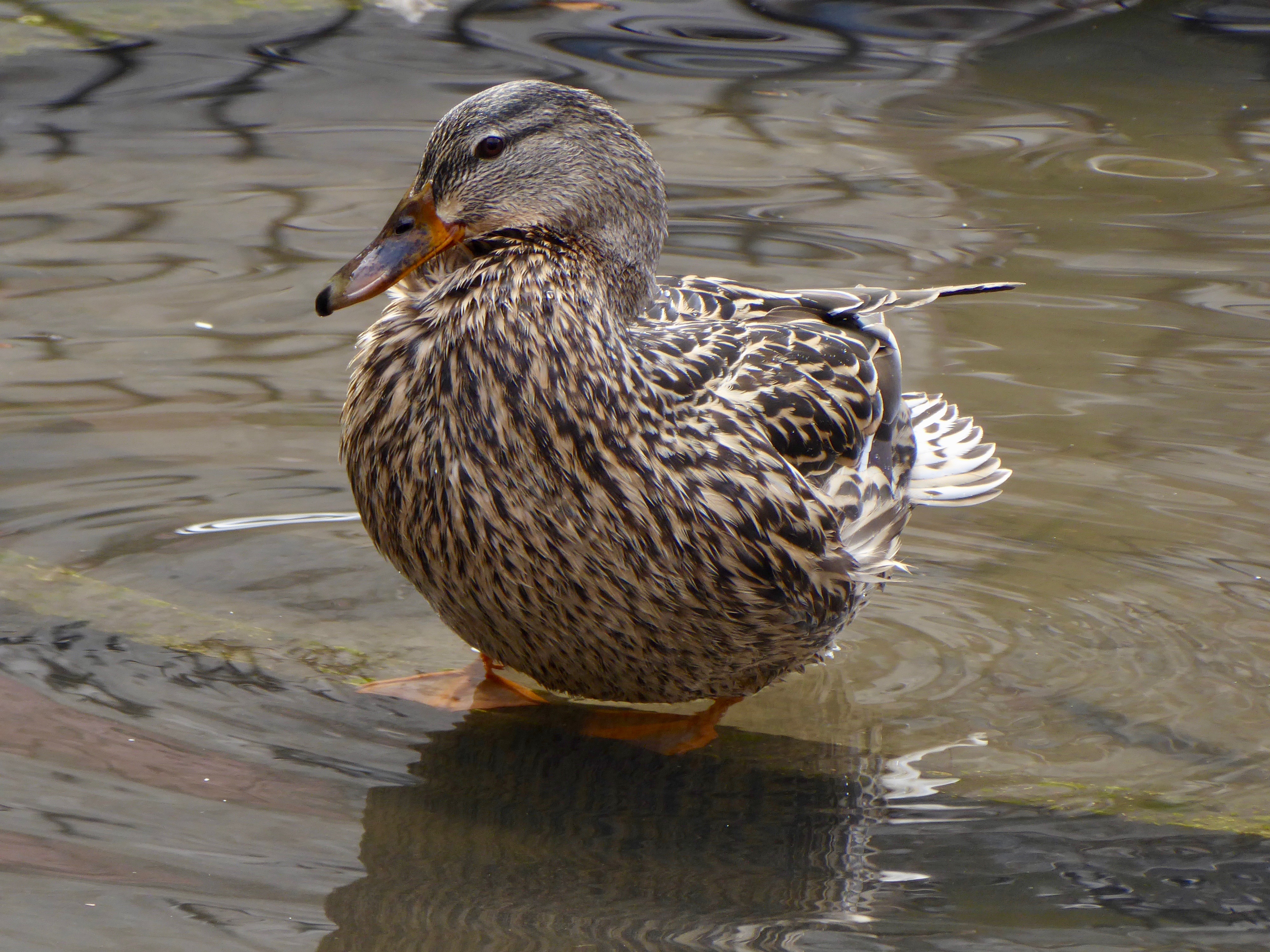 Let’s not forget Wingman, who’s probably the father of both upcoming broods: 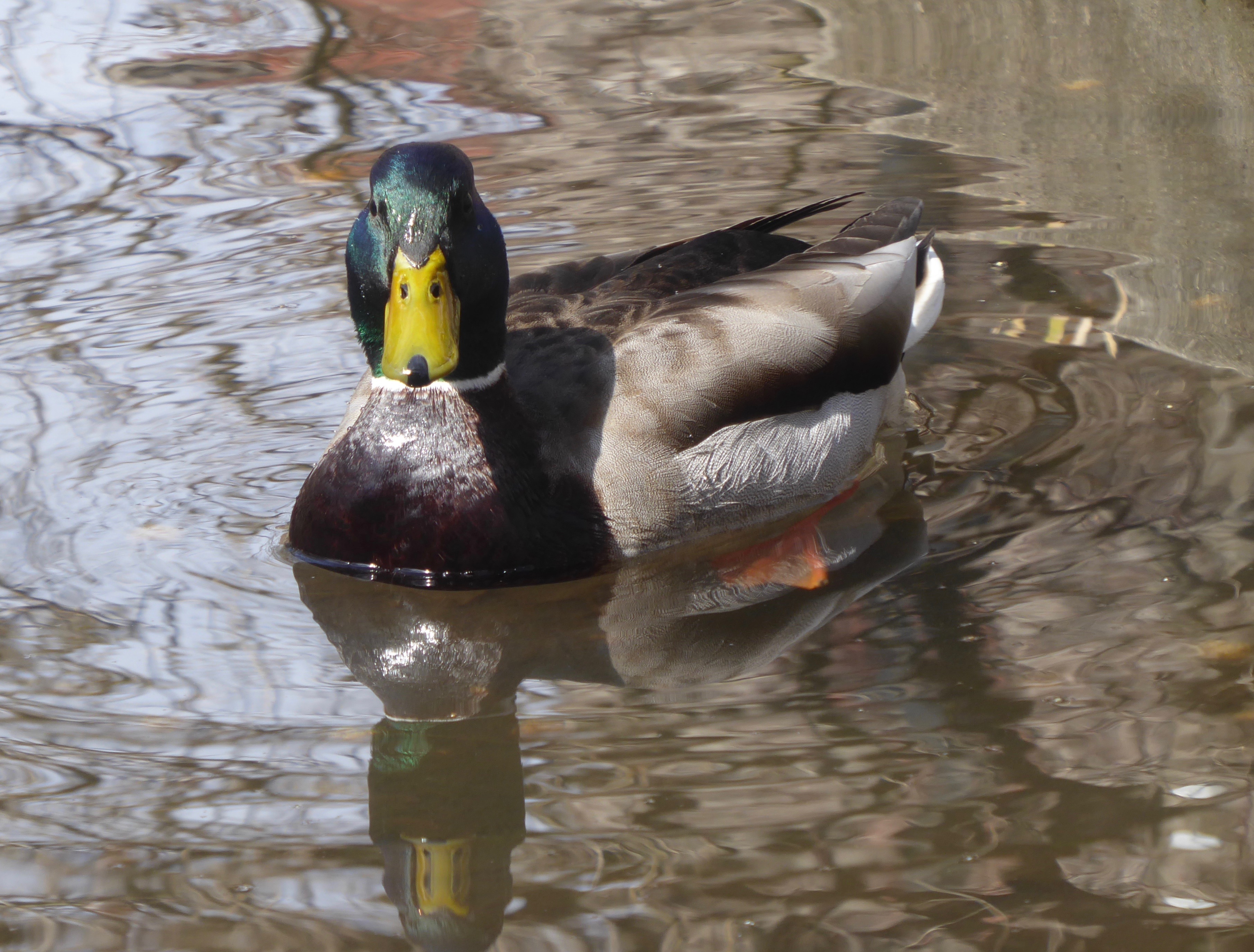 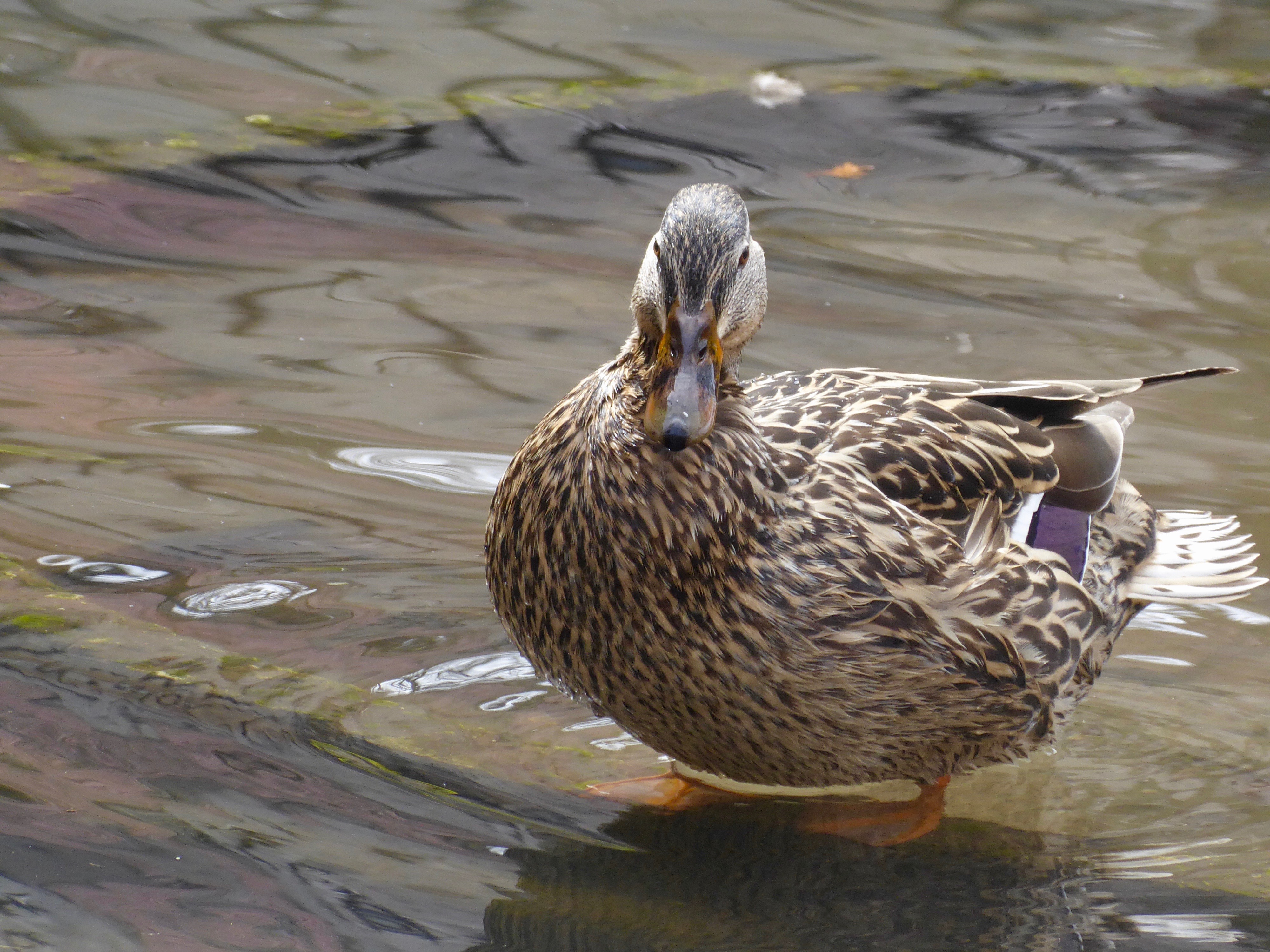 If drakes were less common, people would marvel more at their beauty. Like onions and Coca-Cola, they are undervalued because they’re so common. 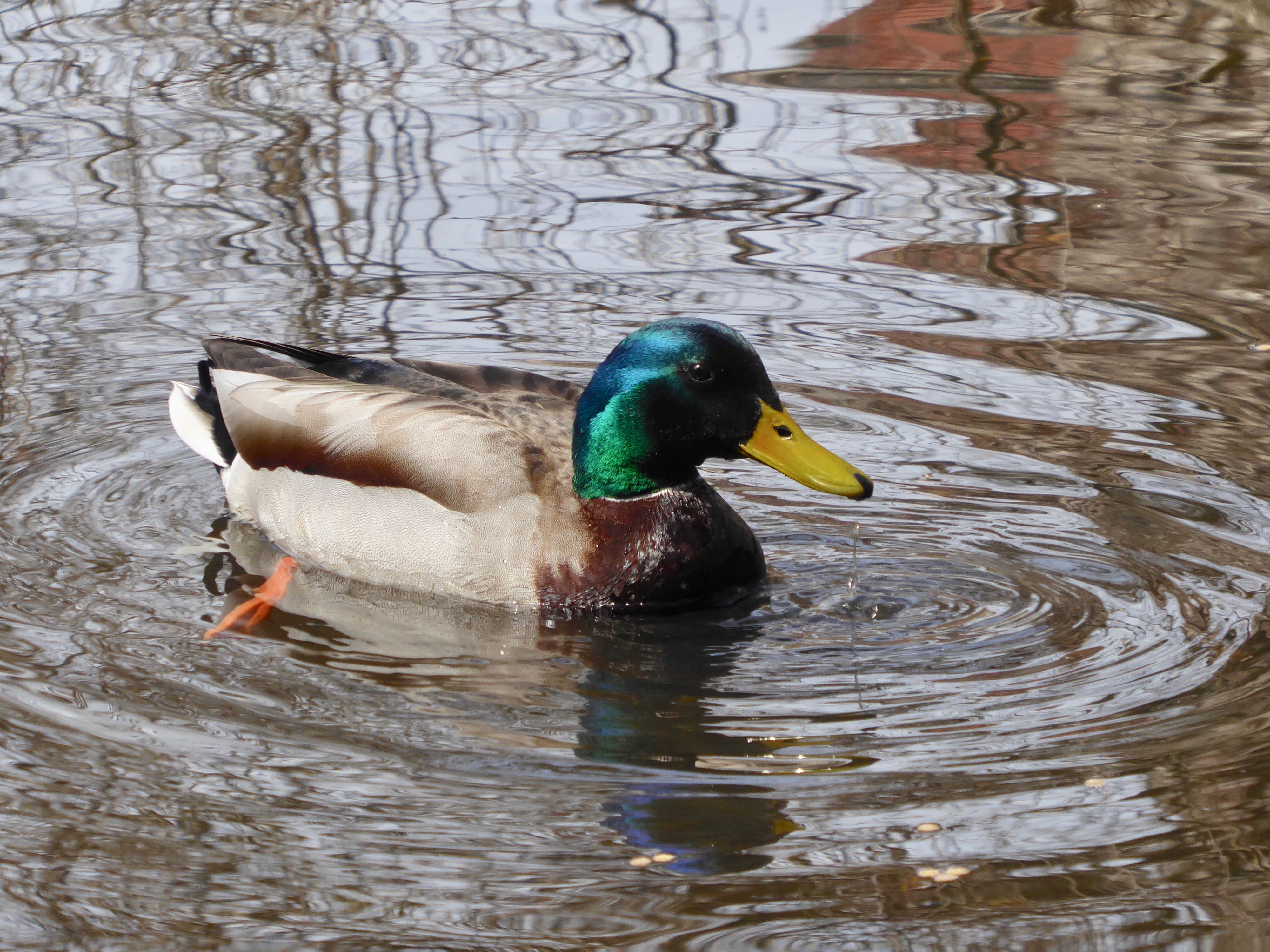 Next installment: the turtles return and the hens continue to sit.