I had forgotten about this until Matthew reminded me the other day, as he was reminded of our joint bit of writing (one of only two we’ve done) while reading a book.  In 2008, about six months before this website began, Nature, which is becoming woker and woker, ran an editorial upon the death of Sir John Templeton, who left $1.5 billion to start the John Templeton Foundation. That money was to be used to try to find evidence for the divine through science. Or, as Templeton himself put it in 2005, he wanted to promote science that would help people discover “spiritual reality”.

About 12 years ago, I sold out. I had been helping a few thousand wealthy families and I did a lot of thinking that if I could tell you the rest of my life, I might help a few thousand wealthy families to become somewhat wealthier. But by selling out to my strongest competitor [Franklin Resources], I can now devote 100% of my time to trying to help people grow in a spiritual way. And that’s a wide-open field – very few people who have any substantial amount of money contribute to helping people grow spiritually.

The Study of Religion

We are tying to persuade people that no human has yet grasped 1% of what can be known about spiritual realities. So we are encouraging people to start using the same methods of science that have been so productive in other areas, in order to discover spiritual realities.

Again, this is due to applying methods of science to discover new modes of communication. So what my foundation is focused on more than anything else is to encourage people to donate to scientific research to help discover aspects of spiritual reality.

Since then, as I’ve written repeatedly, Templeton has kept injecting huge amounts of money into science (and theology) to foster Sir John’s agenda. That includes the annual award of the Templeton Prize, a big pot o’ cash designed to exceed the Nobel Prize (it’s now up to £ 1.1 million). Once given to pure religionists like Mother Teresa and Billy Graham, the Foundation usually confers now it on religion-friendly scientists who will argue that religion is useful and important: people like Martin Rees and Freeman Dyson.

And the Prize has a “new” purpose statement:

The Templeton Prize honors individuals whose exemplary achievements advance Sir John Templeton’s philanthropic vision: harnessing the power of the sciences to explore the deepest questions of the universe and humankind’s place and purpose within it.

Meet the new boss—same as the old boss. “Deep questions” or “Big Questions” have, for the Templeton Foundation, always been synonymous with “the numinous”, “the divine”, or “that which violates science’s naturalism”.

But I digress. Here’s Nature‘s 2008 smarmy editorial about science and religion being BFFs (click on screenshot).

At the time of his passing last week, Templeton had poured some US$1.5 billion into the John Templeton Foundation, which funds research at the intersection of science and spirituality. Critics have maintained that the foundation needlessly conflates science and faith, with some calling for an outright boycott of Templeton funding.

. . . [John Templeton] believed institutional religion to be antiquated, and hoped a dialogue with researchers might bring about advances in theological thinking. The foundation’s substantial funding of science and religion departments around the world is directed towards those ends. Theologians have also used foundation money to develop and promote arguments that reconcile some of the apparent contradictions between science and religion. For those many scientists with a faith, promoting the compatibility of science with faith is a prudent and even necessary goal. Strict atheists may deplore such activities, but they can happily ignore them too. [JAC: I think this is Nature’s way of saying: “Atheists, if you don’t like it, bugger off.”]

The foundation’s scientific agenda addresses ‘big questions’, which has sometimes resulted in work that many researchers regard as scientifically marginal. One field popular with the foundation is positive psychology, which seeks to gauge the effects of positive thinking on patients, and which critics argue has yielded little. Also heavily supported are cosmological studies into the existence of multiple universes — a notion frequently criticized for lying at the edge of falsifiability. The concern is that such research has been unduly elevated by the foundation’s backing. But whatever one thinks of positive psychology and the like, the foundation’s support has not taken anything away from conventional funding. And in the field of cosmology at least, it has arguably yielded some new and interesting ideas.

The foundation’s management now falls chiefly to Templeton’s son, John M. Templeton Jr, whose Christian beliefs are reportedly much more conventional than his father’s. A critical scrutiny of the foundation’s scientific influence continues to be warranted, and no scientific organization should accept sums of money so large that its mission could be perceived as being swayed by religious or spiritual considerations. But critics’ total opposition to the Templeton Foundation’s unusual mix of science and spirituality is unwarranted.

Back in the day, Matthew and I took umbrage at the claim that science had anything to contribute to religion beyond disproving its empirical claims, and, in my book Faith Versus Fact, I argue that religion has contributed nothing to science. I stand by those claims. But in 2008, that book wasn’t written, but its germs can be seen in the letter that Matthew and I jointly sent to Nature. And, mirabile dictu, they published it:

The reason this came up is that Matthew was reading a book published in 2010, the last in a series of three by the author, which happens to end with the only known reference to our letter.

The title page (click to go to Amazon link): 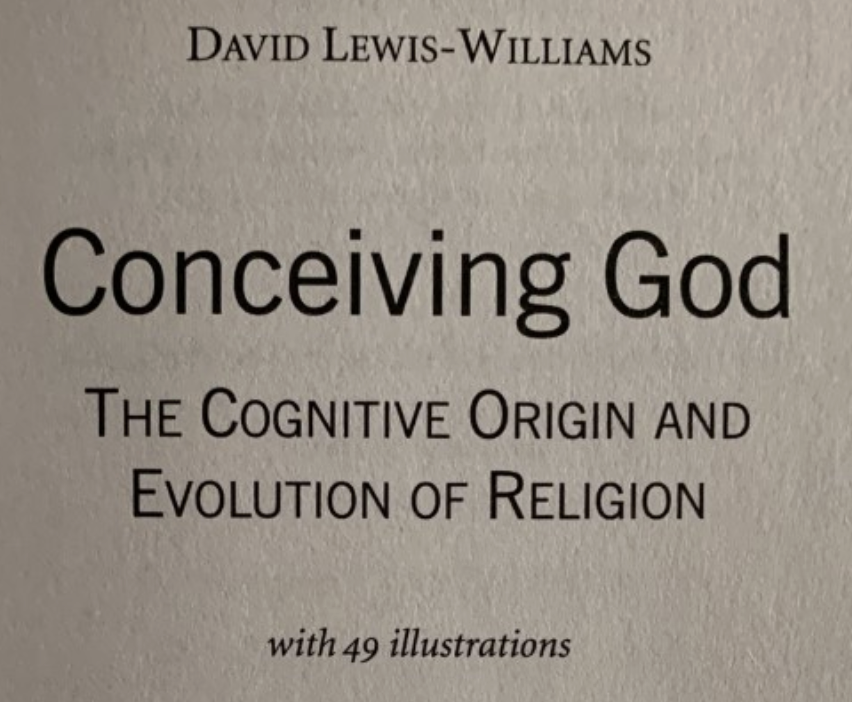 The opening page with its epigraphs to which Lewis-Williams refers in the final page (below): 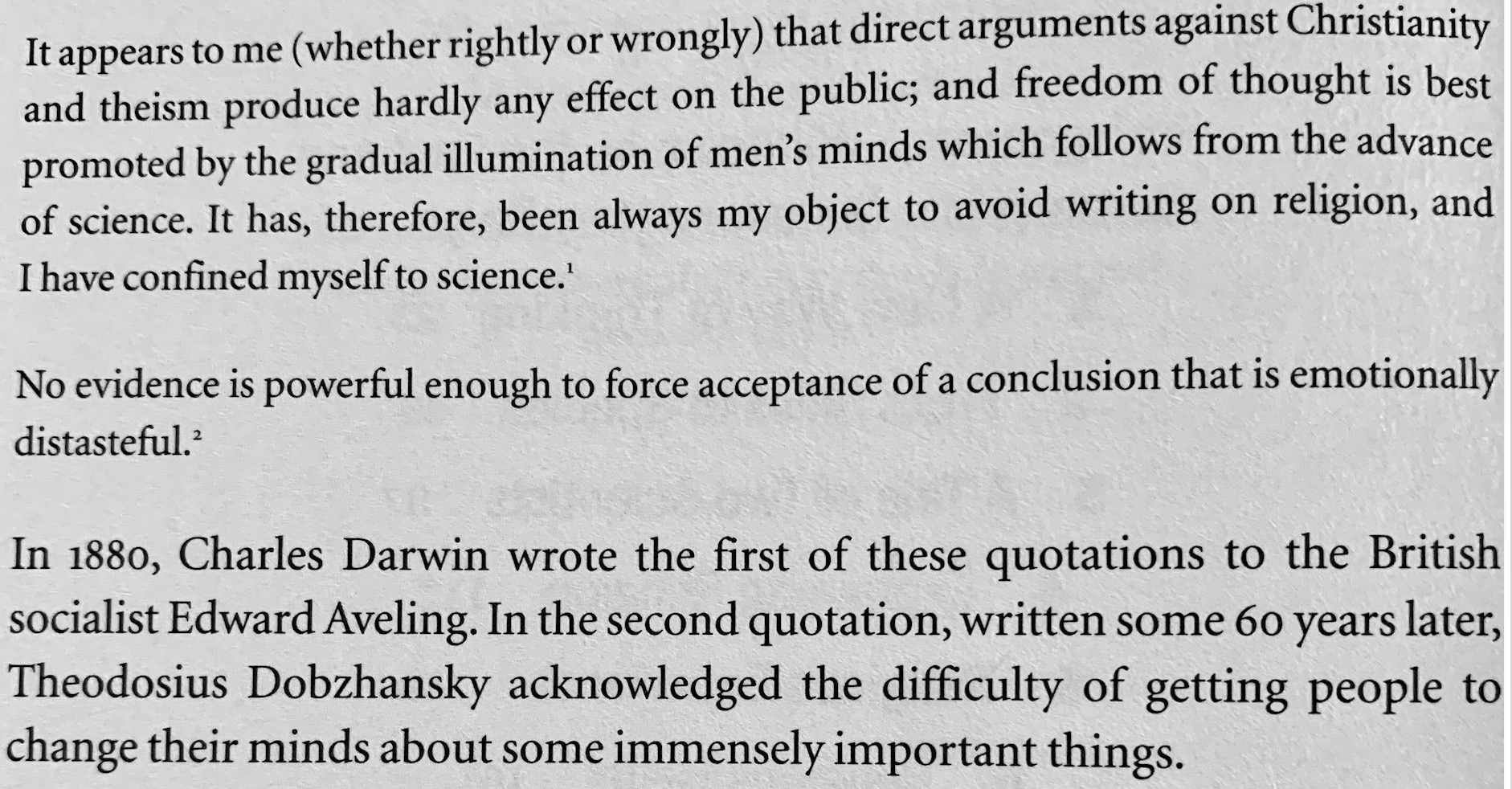 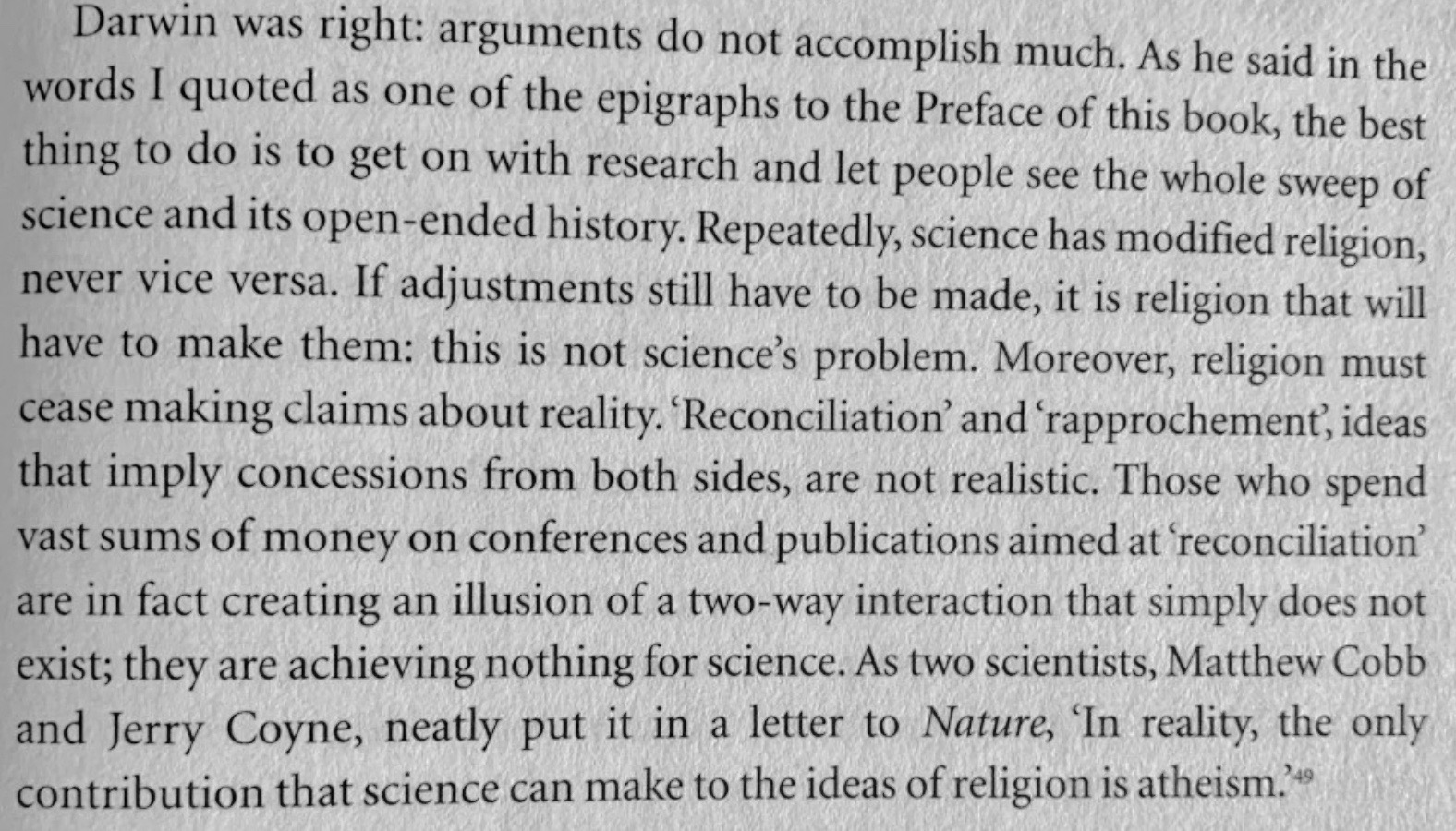 The quote we gave was pithy, but perhaps a tad too pithy. As I said above, science can also show that religious claims are wrong (or, in the case of empirical claims about history, supported). But as for the ideas rather than the empirical claims of religion, yes, science’s sole contribution is to destroy them.

28 thoughts on “In which Matthew and I went after Templeton”