Max Boot, author of the provocatively titled piece below, isn’t exactly a liberal, but he isn’t a conservative either. His Wikipedia bio says this:

Max A. Boot is an American author, consultant, editorialist, lecturer, and military historian. He worked as a writer and editor for Christian Science Monitor and then for The Wall Street Journal in the 1990s. He is now the Jeane J. Kirkpatrick Senior Fellow in National Security Studies at the Council on Foreign Relations. He has written for numerous publications such as The Weekly Standard, The Los Angeles Times, and The New York Times, and he has also authored books of military history. In 2018, Boot published The Road Not Taken, a biography of Edward Lansdale, and The Corrosion of Conservatism: Why I Left the Right, which details Boot’s “ideological journey from a ‘movement’ conservative to a man without a party” in the aftermath of the 2016 presidential election.

According to his op-ed in yesterday’s Washington Post (click on screenshot), Boot once thought that Trump was the worst American President of modern times. He’s now changed his mind: he sees Trump as the worst President of all time.  Well, I’m not a historian, but based on what I know of American history, I have to agree with him. 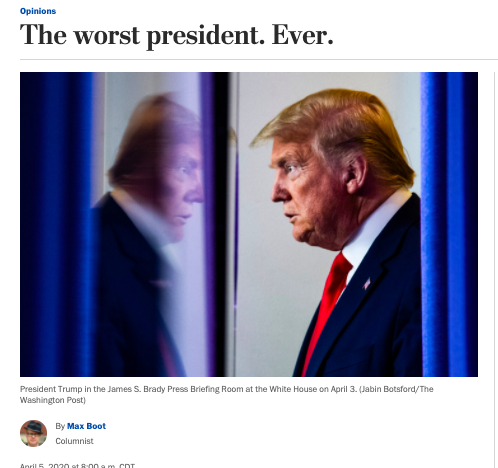 A couple of excerpts:

Until now, I have generally been reluctant to label Donald Trump the worst president in U.S. history. As a historian, I know how important it is to allow the passage of time to gain a sense of perspective. Some presidents who seemed awful to contemporaries (Harry S. Truman) or simply lackluster (Dwight D. Eisenhower, George H.W. Bush) look much better in retrospect. Others, such as Thomas Jefferson and Woodrow Wilson, don’t look as good as they once did.

So I have written, as I did on March 12, that Trump is the worst president in modern times — not of all time. That left open the possibility that James Buchanan, Andrew Johnson, Franklin Pierce, Warren Harding or some other nonentity would be judged more harshly. But in the past month, we have seen enough to take away the qualifier “in modern times.” With his catastrophic mishandling of the coronavirus, Trump has established himself as the worst president in U.S. history.

His one major competitor for that dubious distinction remains Buchanan, whose dithering helped lead us into the Civil War — the deadliest conflict in U.S. history. Buchanan may still be the biggest loser. But there is good reason to think that the Civil War would have broken out no matter what. By contrast, there is nothing inevitable about the scale of the disaster we now confront.

The foreseeable consequences, and Trump’s bungling have, says Boot, greatly contributed to the coming death toll (perhaps more, he says, “than the U.S. fatalities in all of our wars combined since 1945″), and the huge unemployment rate of about 13%—the highest since the Depression of the ’30s.

Boot recounts all the warnings Trump could have acted on, including from media experts, leading Democrats, and even officials in his own administration—information apparently thoroughly described in a Post article on Saturday.

The Post article is the most thorough dissection of Trump’s failure to prepare for the gathering storm. Trump was first briefed on the coronavirus by Health and Human Services Secretary Alex Azar on Jan. 18. But, The Post writes, “Azar told several associates that the president believed he was ‘alarmist’ and Azar struggled to get Trump’s attention to focus on the issue.” When Trump was first asked publicly about the virus, on Jan. 22, he said, “We have it totally under control. It’s one person coming in from China.”

We all know what happened next: Trump’s continuing failure to recognize the seriousness of the problem, his claiming that it was under control, his contribution to bidding wars for vital medical equipment, his dissing of governors and claim that he’d favor states whose governors toadied to him, his touting of an untested drug as a panacea for those infected, and his lying about testing. All of this produced not only deaths with their horrible concomitant of sorrow and grief, but also to massive unemployment and now to tremendous anxiety and confusion on the part of Americans. It is the very opposite of leadership.

Combine that with all his other lies, missteps, and other pieces of harmful narcissism emitted since 2016, and you get Boot’s conclusion:

This fiasco is so monumental that it makes our recent failed presidents — George W. Bush and Jimmy Carter — Mount Rushmore material by comparison. Trump’s Friday night announcement that he’s firing the intelligence community inspector general who exposed his attempted extortion of Ukraine shows that he combines the ineptitude of a George W. Bush or a Carter with the corruption of Richard Nixon.

Trump is characteristically working hardest at blaming others — China, the media, governors, President Barack Obama, the Democratic impeachment managers, everyone but his golf caddie — for his blunders. His mantra is: “I don’t take responsibility at all.” It remains to be seen whether voters will buy his excuses. But whatever happens in November, Trump cannot escape the pitiless judgment of history.

Well, you can disagree with the assessment of Carter, but it doesn’t matter. Trump is palpably worse than any President I’ve known in my lifetime, and I’ve lived through Nixon, W., and Reagan.  Frankly, I don’t care much about how history judges Trump (it will be harsh), nor does he care, because in his warped mind he’ll see post-presidential assessments as “fake news.” What I care about is what happens in November. We cannot let this man be re-elected.

172 thoughts on “Trump: worst president of all time?”