I have exciting news: both Honey and Dorothy have started nesting and laying eggs, and I know where both of the nests are. The bad news is that Honey has nested on a ledge on the wrong side of the building (the “non-pond” side), and her nest is 2.5 floors up from a cement porch. That would mean that her ducklings would land on cement when they leap, and that’s not good at all. But don’t worry—Professor Ceiling Cat (Emeritus) and the University of Chicago Facilities are on the problem, which won’t occur for another five weeks or so. I promise that the ducklings will have a soft landing.

But more about the eggs, and Honey’s nest, in a day or two. Here are some photos from Botany Pond.

First, here’s a video of the handsome and ever polite Wingman escorting Honey and Dorothy around the pond. Dorothy is in the lead at first.

Wingman is always on the watch. He often patrols the bank when the hens are feeding, neglecting to feed himself while he watches over the inseminated hens (I’m sure he’s the father of both broods). He’s clearly protecting his genes! 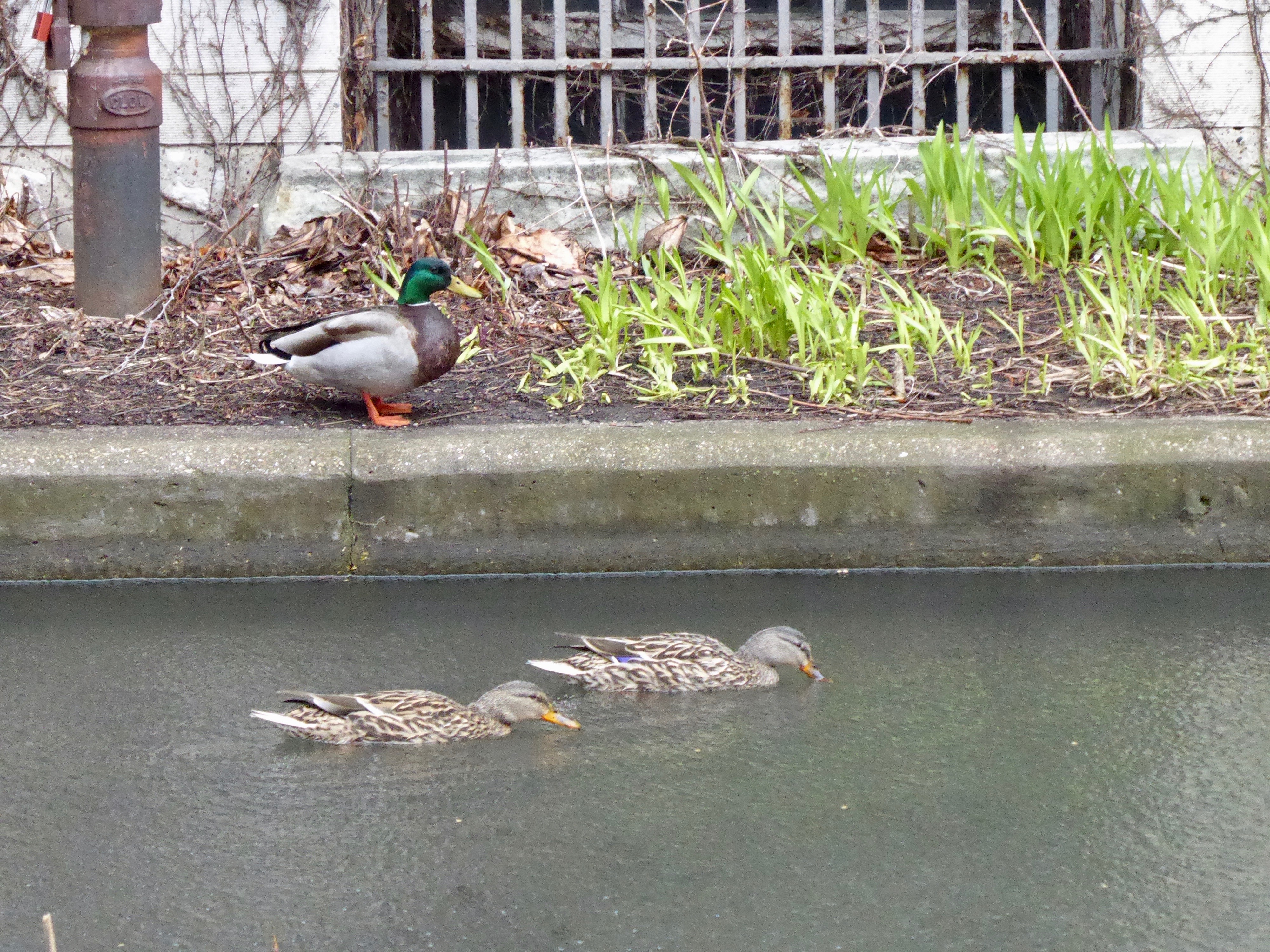 Here’s Dorothy standing on a second-floor ledge on March 30, the day before I spotted her nest. Can you see her? Her nest is now one floor above, on the north end of the building (to the left). 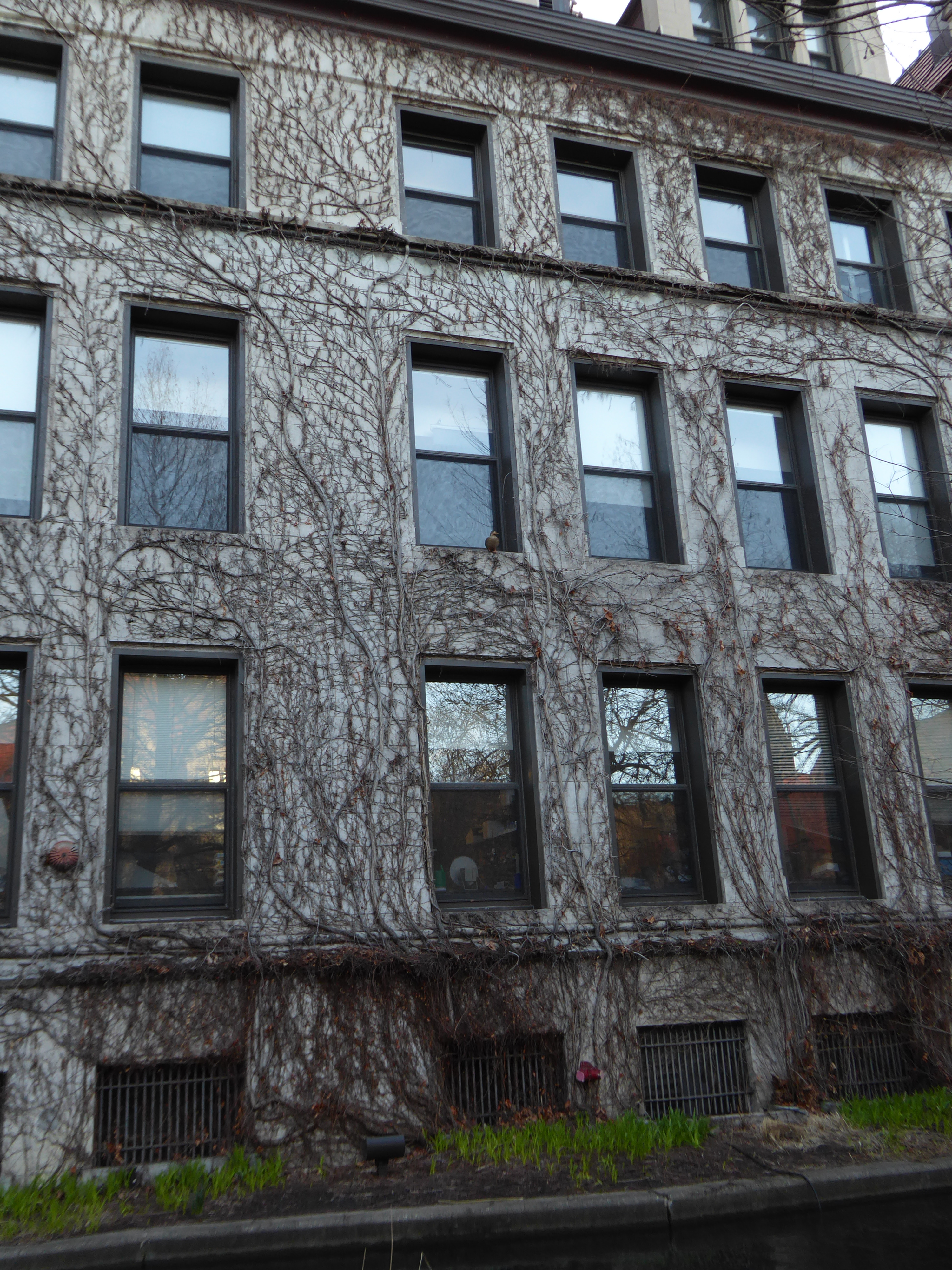 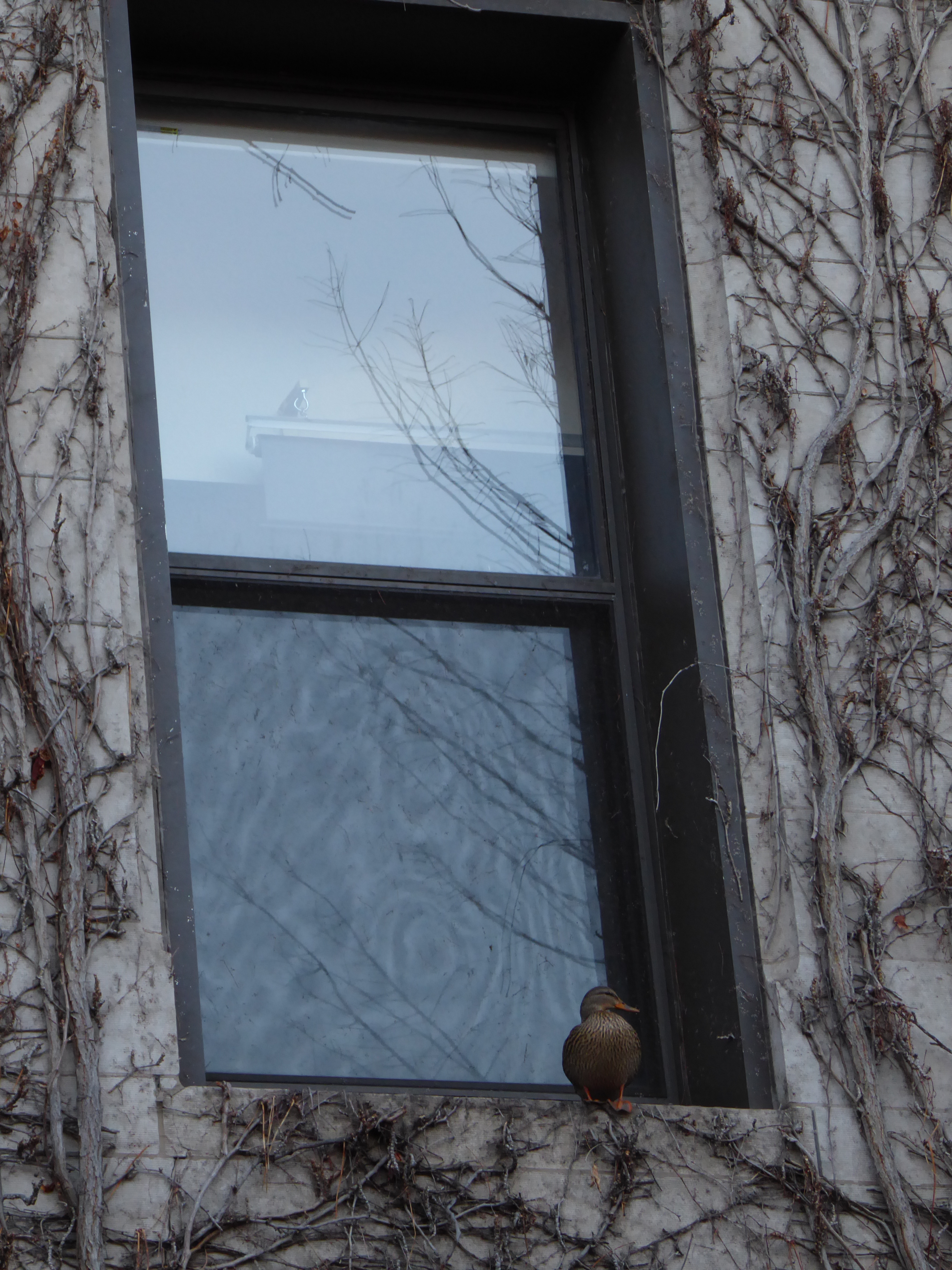 You can tell from the bill that this is Dorothy, for she has a black dot on the left side underneath the nostril. 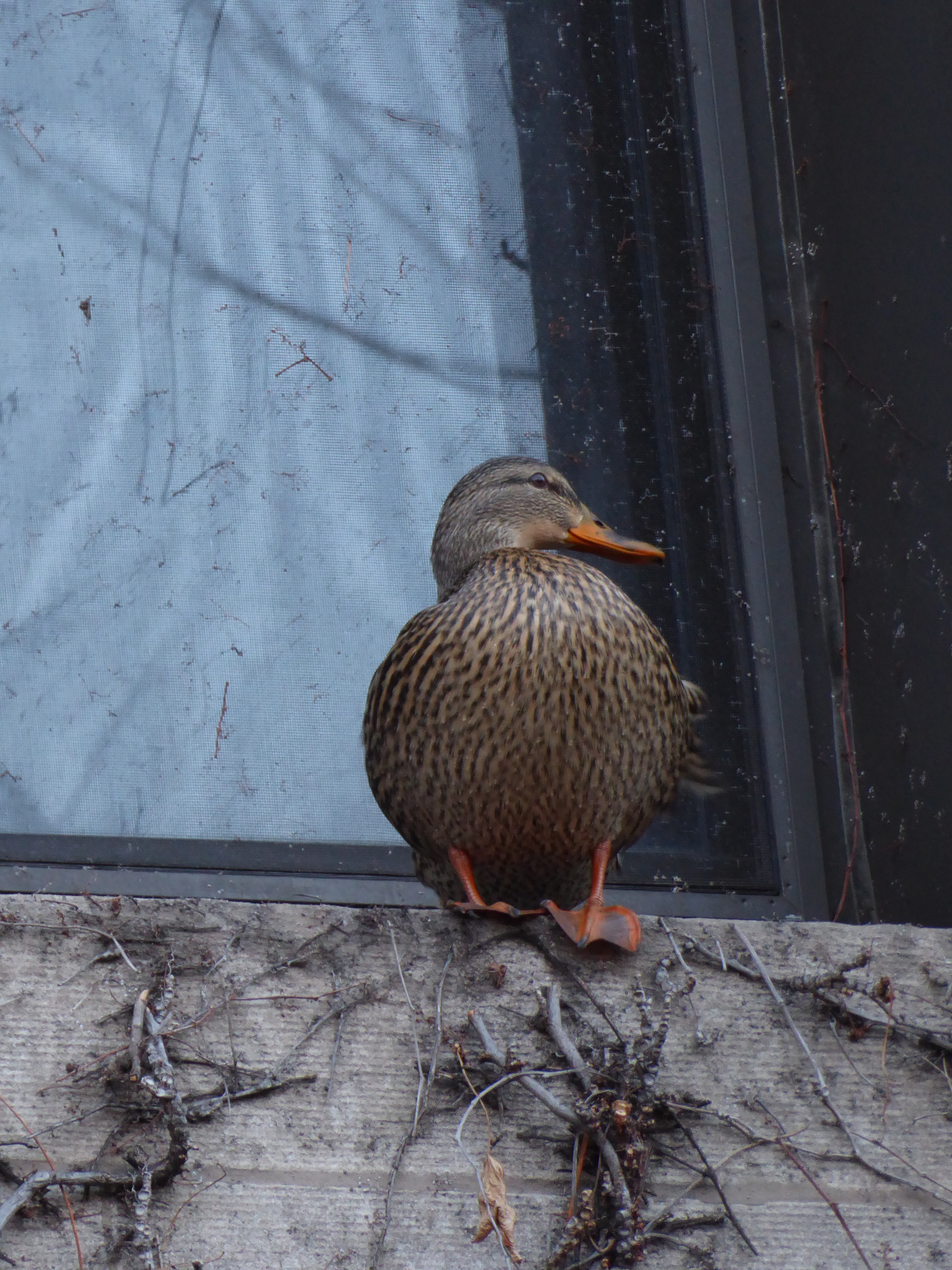 THIS is where she’s building her nest: 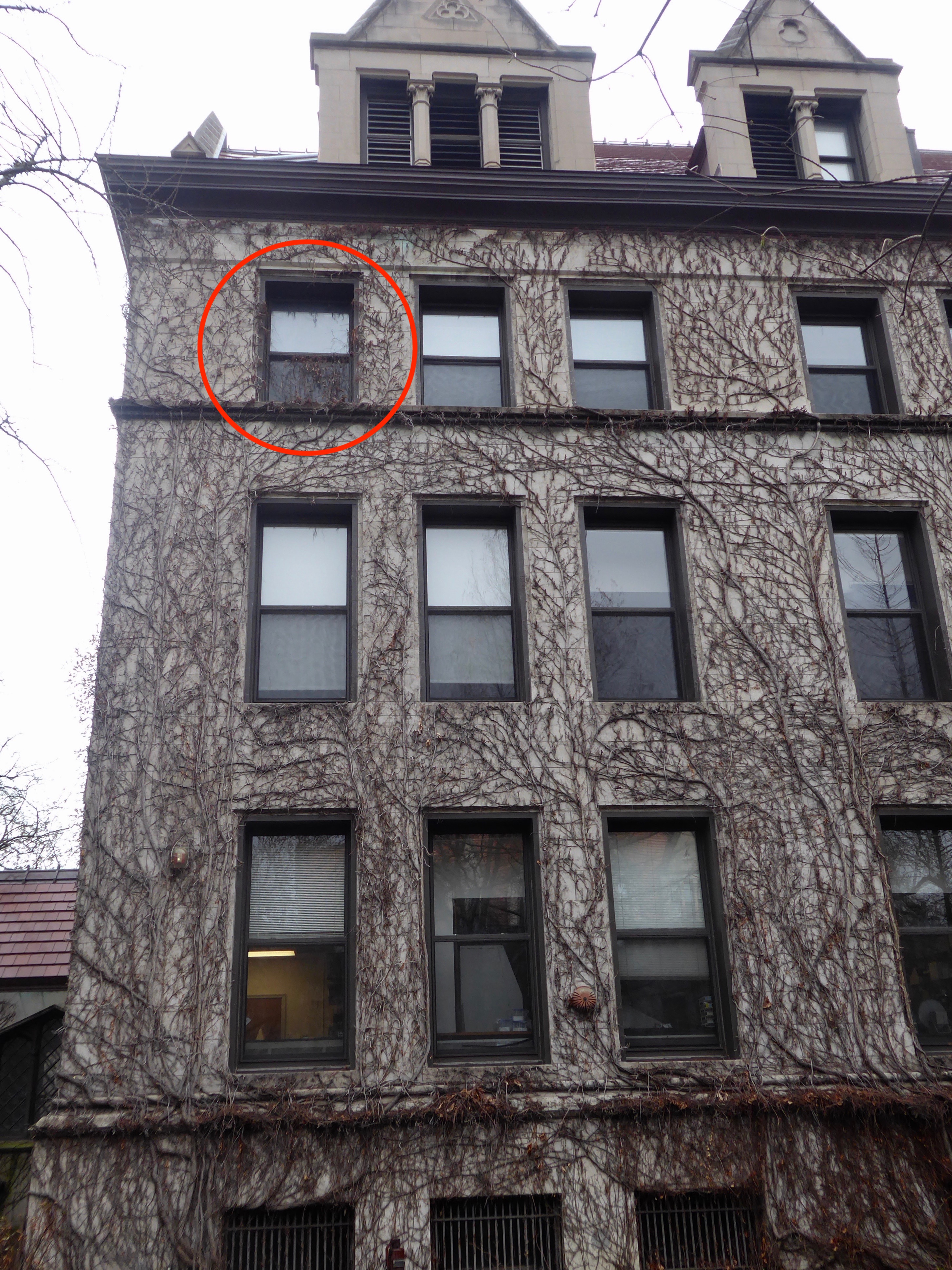 Below is a video of how she’s doing it. Mallards aren’t great at making neat nests: they roughly scrape together grass, leaves and twigs, and usually always nest on the ground. But here we have a case of a wild, ground-nesting species adapting to an urban habitat by nesting in safe but rather inconvenient places (mallard ducklings aren’t well adapted for the big drop to the pond, though they do it okay). The one concession to comfort that a mother mallard makes is lining her nest with soft feathers that she plucks from her breast. We’re not at that stage yet.

Honey and Dorothy will both lay one egg a day until their clutch (about 10-15 eggs) is complete. Then they sit down tight on all the eggs so that incubation and development starts simultaneously for all the eggs. This in turn ensures that all the ducklings hatch within one 24-hour period, so they can all head (jump in this case!) to the pond with their mother. She turns the eggs just so with her bill, ensuring that they all are equally and uniformly exposed to her body heat.

In the case of Dorothy and Honey, their ducklings will hatch within a few hours of each other and leap off the ledge to the ground, with Mom in the pond egging them on by making calls that they’ve learned to recognize in the egg. Here you go—a rare video of Dorothy plucking dead leaves and twigs from the Virginia Creeper to make a nest (she chose that ledge because it has a lot of the plant material to form a scaffold for her eggs).

Since the hens are still laying, they are on the nest only when squeezing out an egg, and they’re eating and swimming the rest of the time. When all the eggs are laid, the hens will disappear from the pond for about 28 days and sit tight on the eggs until they hatch. They may fly down for a drink and a quick feed, but only for an hour at most. I will know they’re incubating because I won’t often see them, and that’s when I’ll begin timing the period until Facilities and I work together to build a landing cushion under both nests. We’ll have the cushions out about 4 days before the scheduled launches. 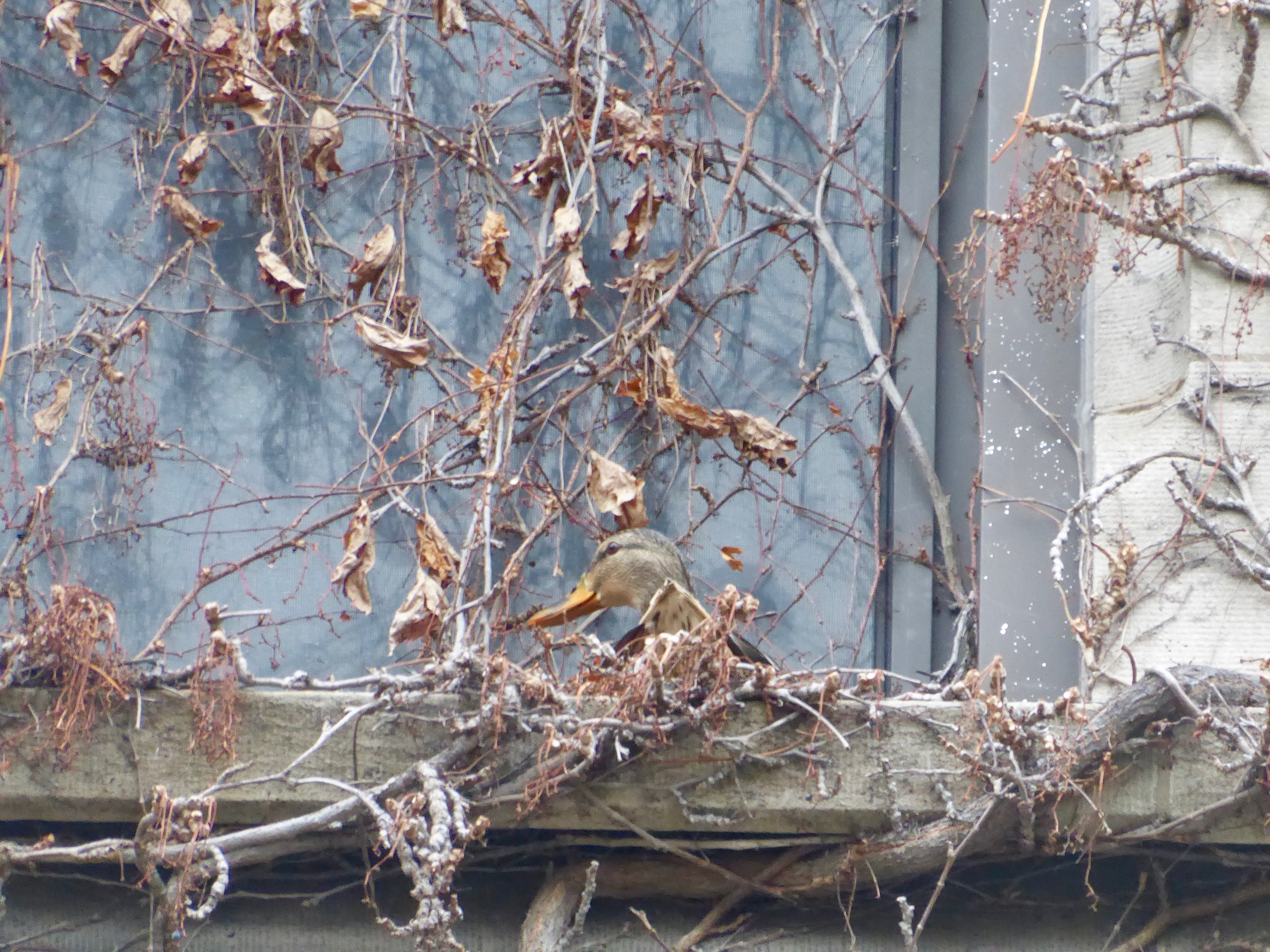 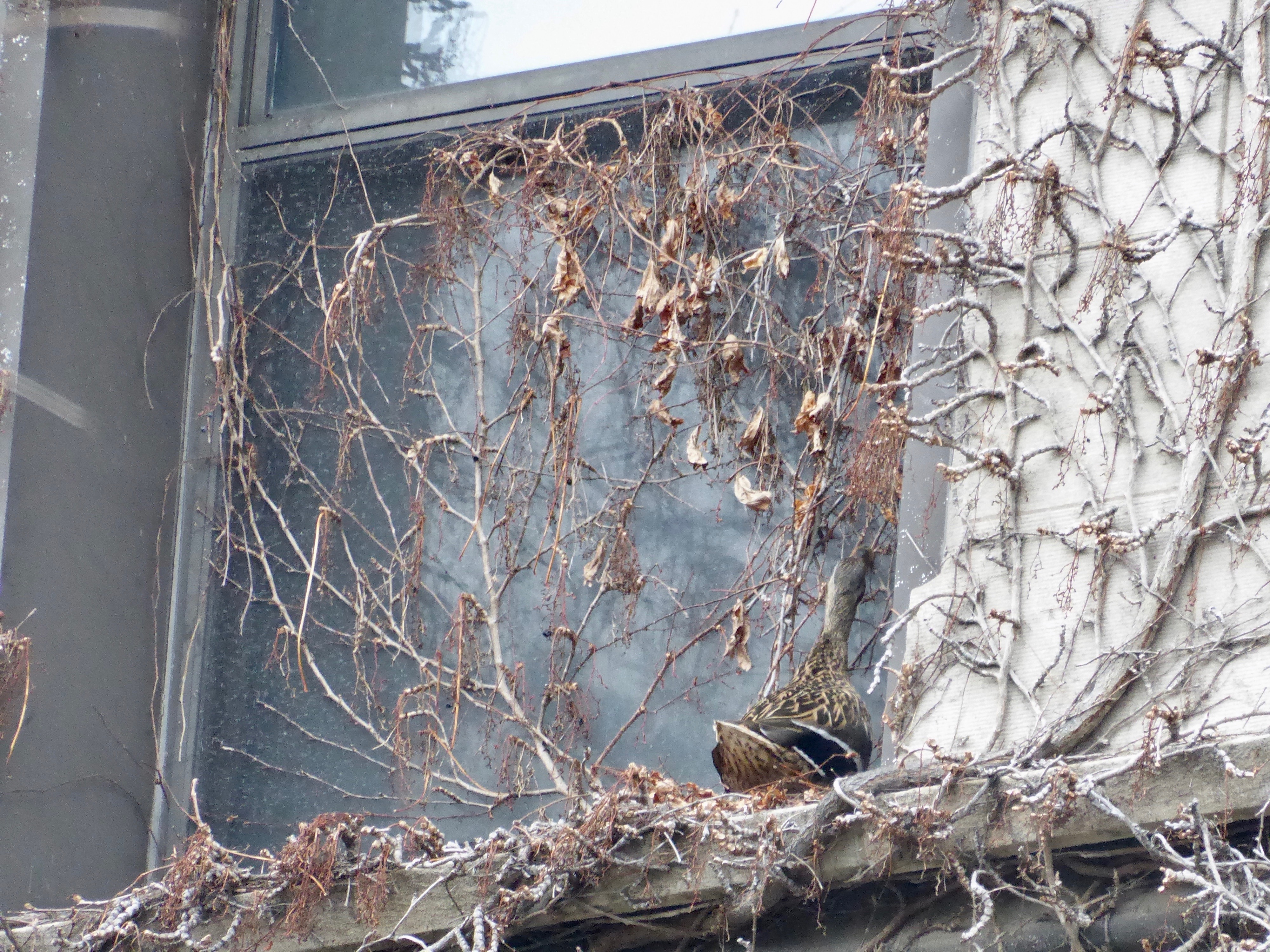 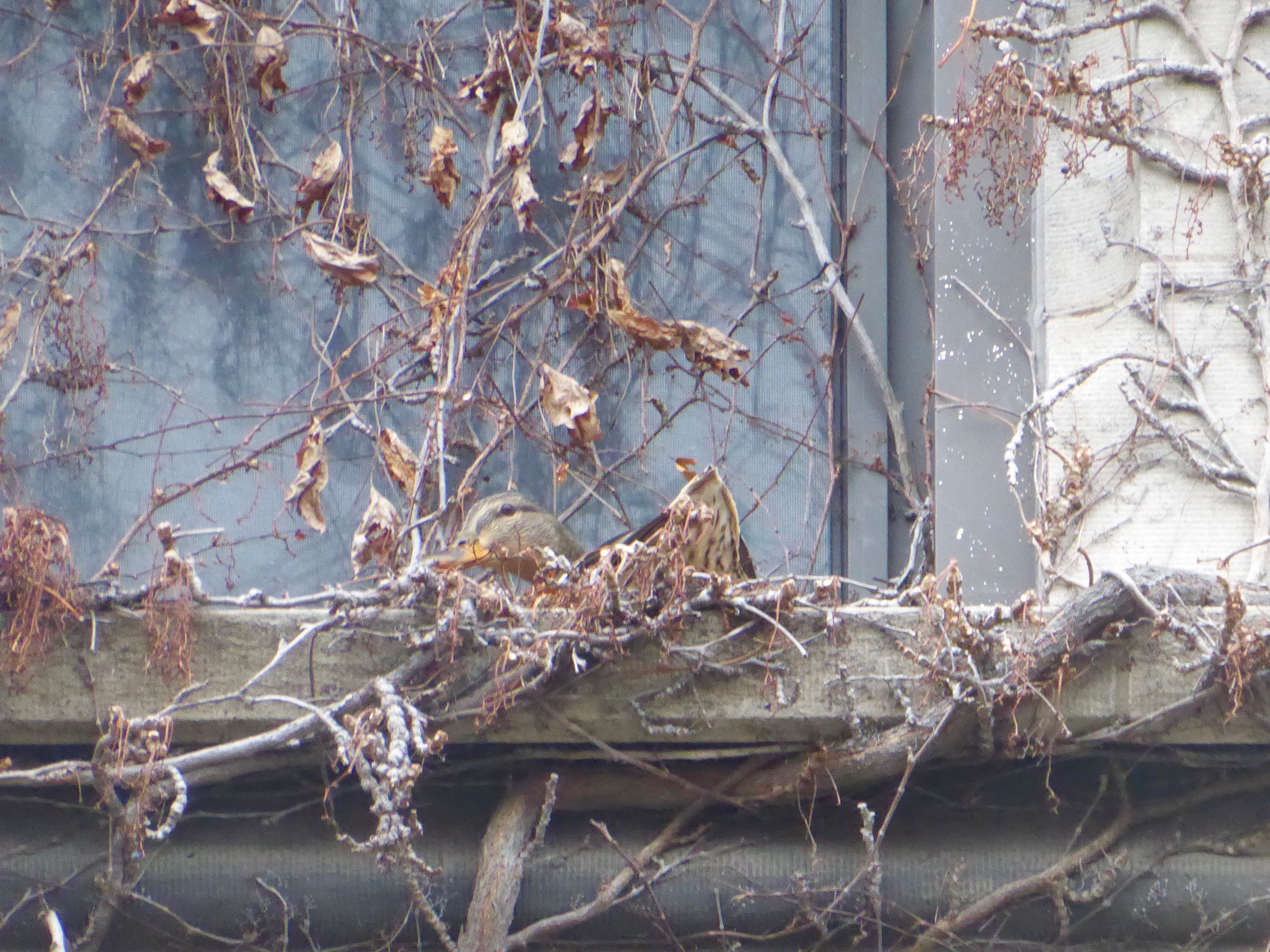 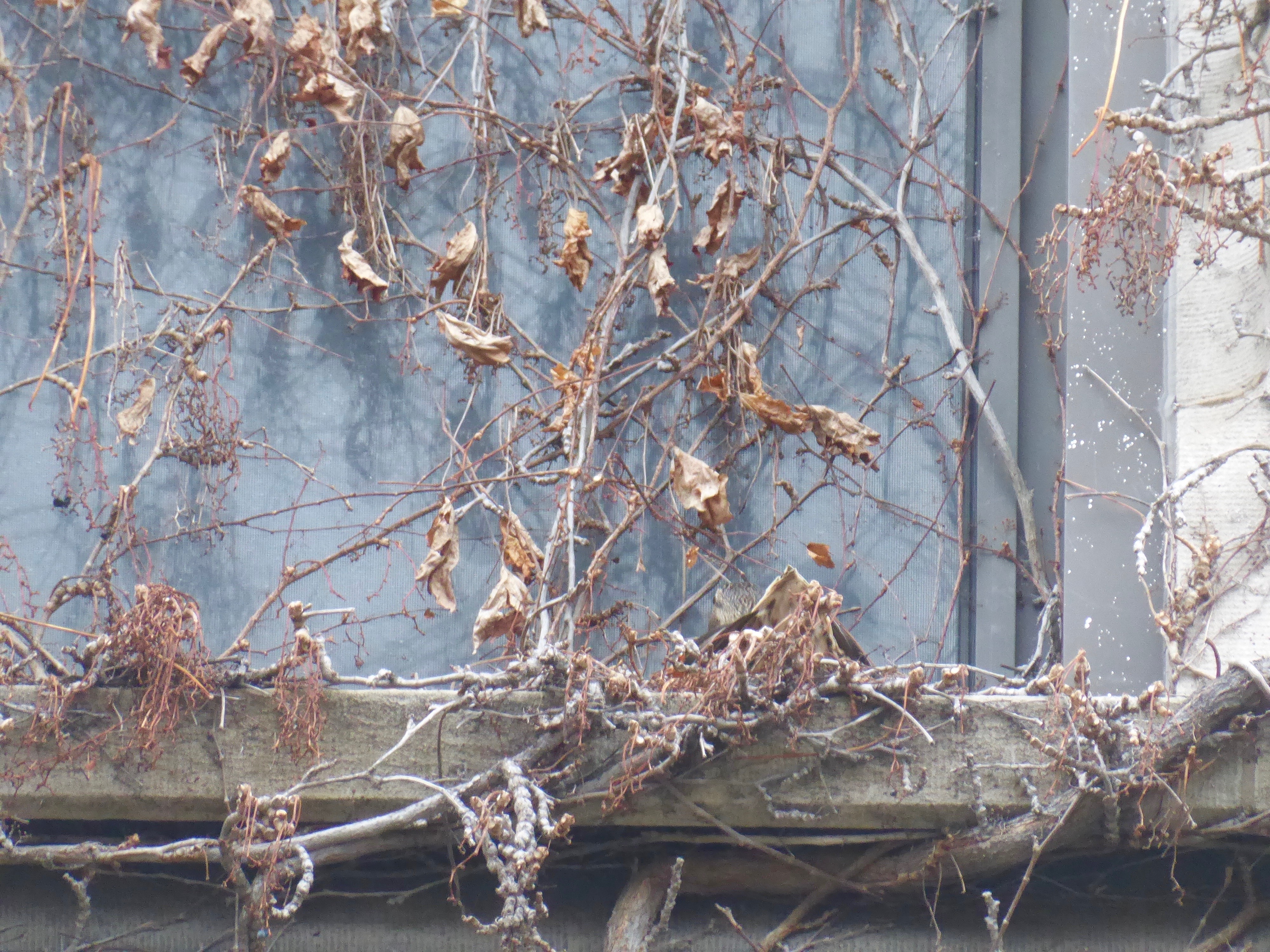 In the meantime, the hens are enjoying their last days of childless freedom, disporting themselves in the water. But they remember that they evolved for one “reason”: to replicate their genes by making more ducks. 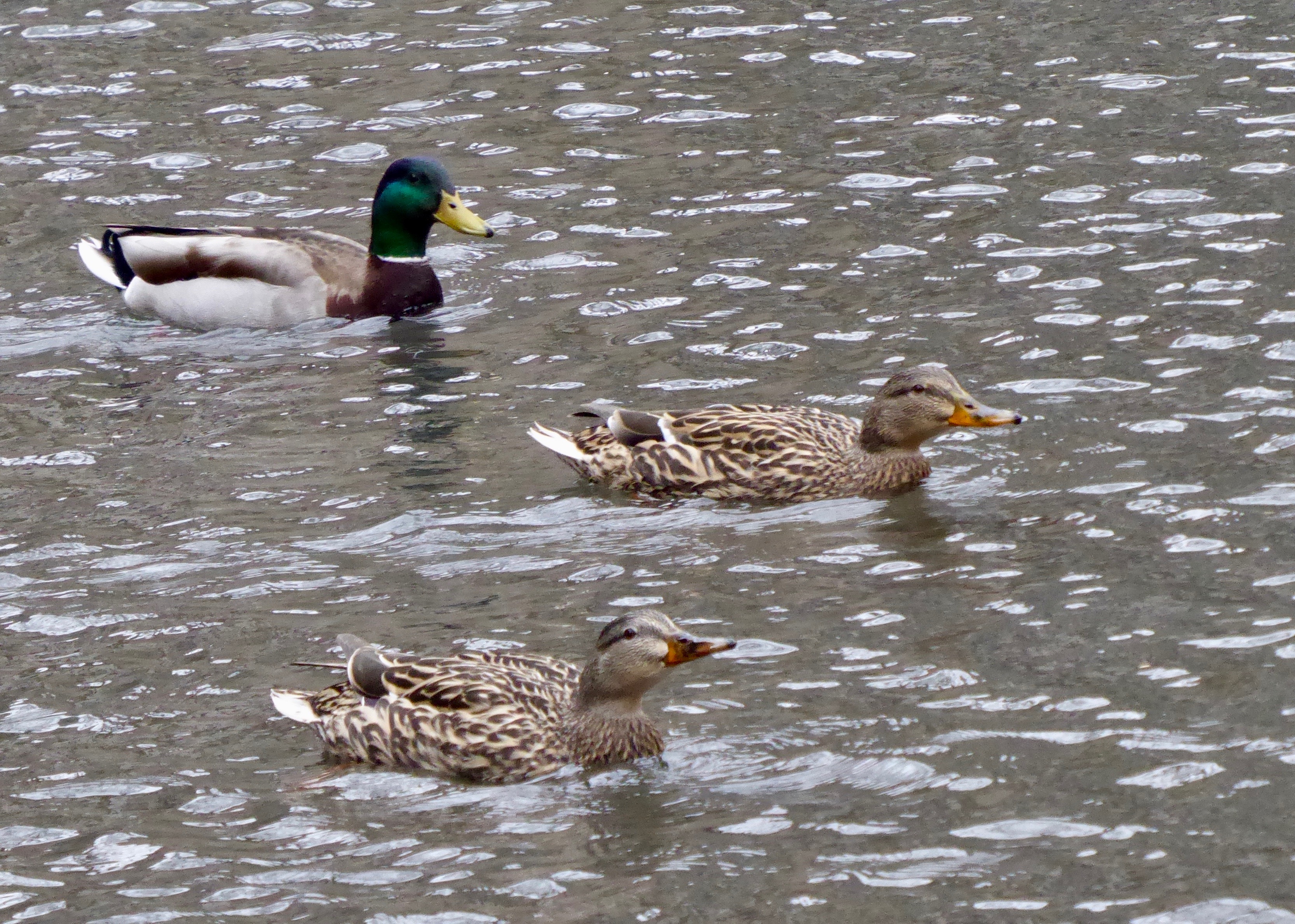 Although I feed them, they’re getting picky, favoring mealworms over duck chow. And they often dabble to get food from the bottom: 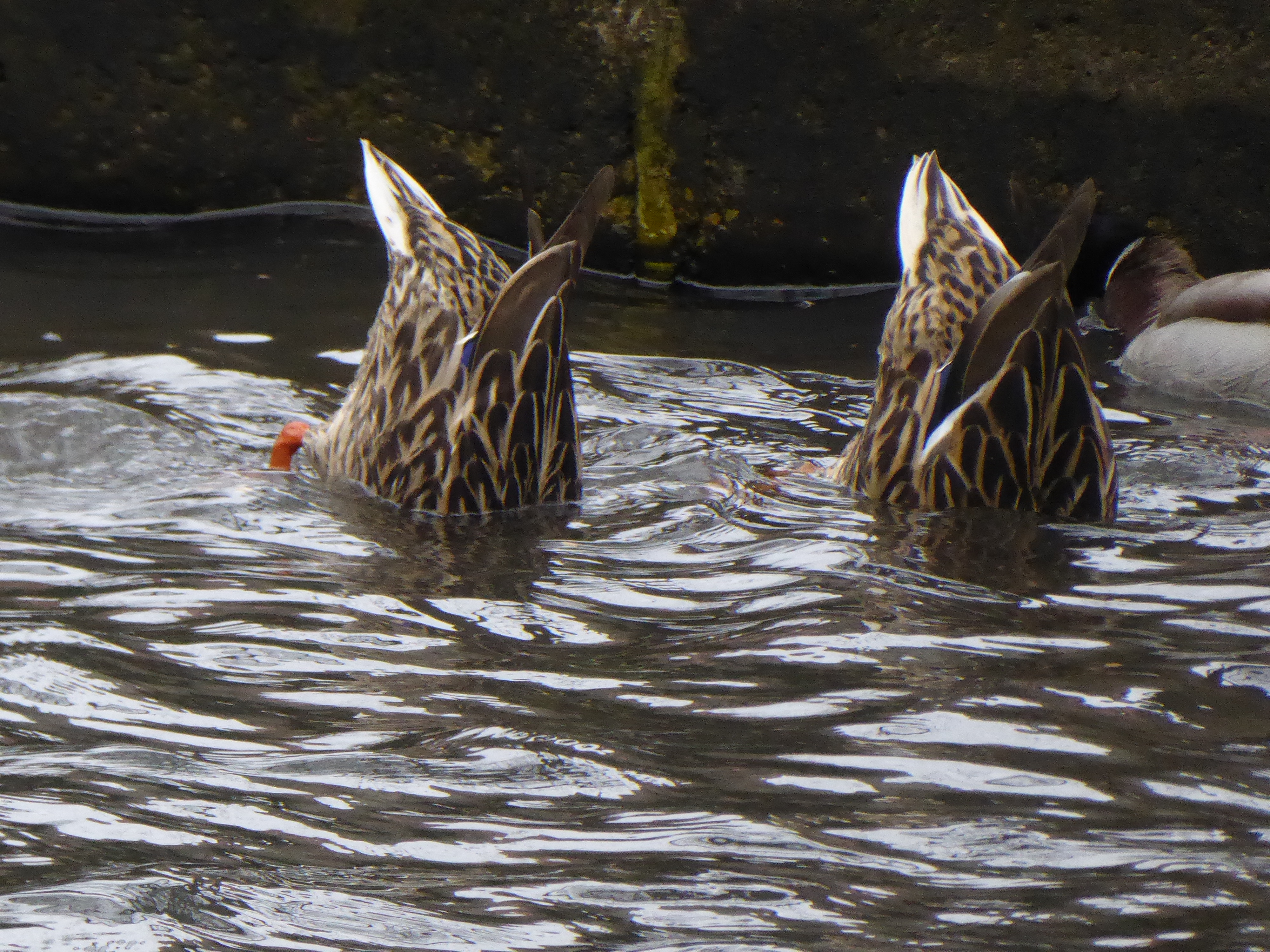 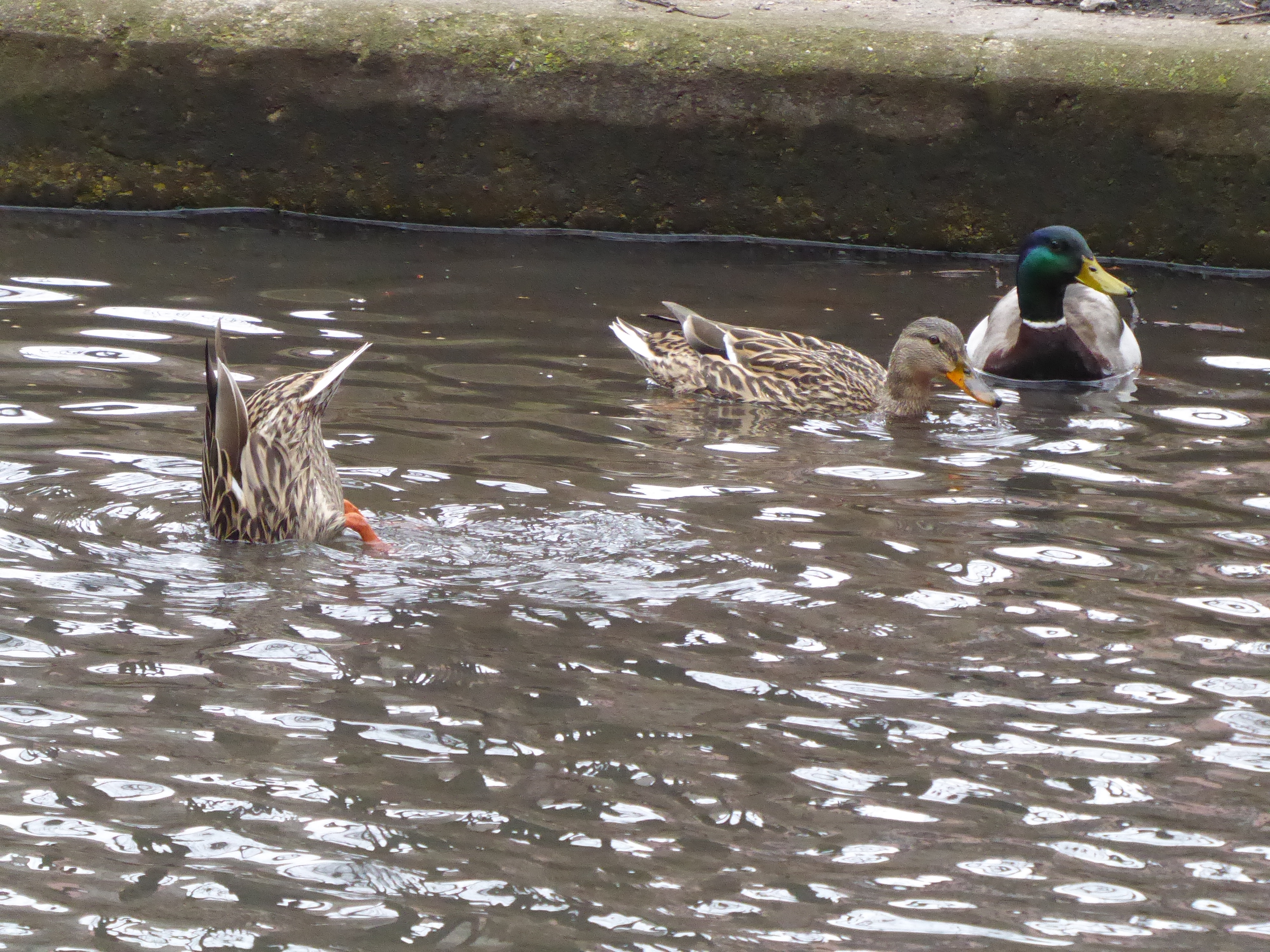 After lunch, as always, they head to the concrete rings for a preen, a drink, a scratch, and a nap: 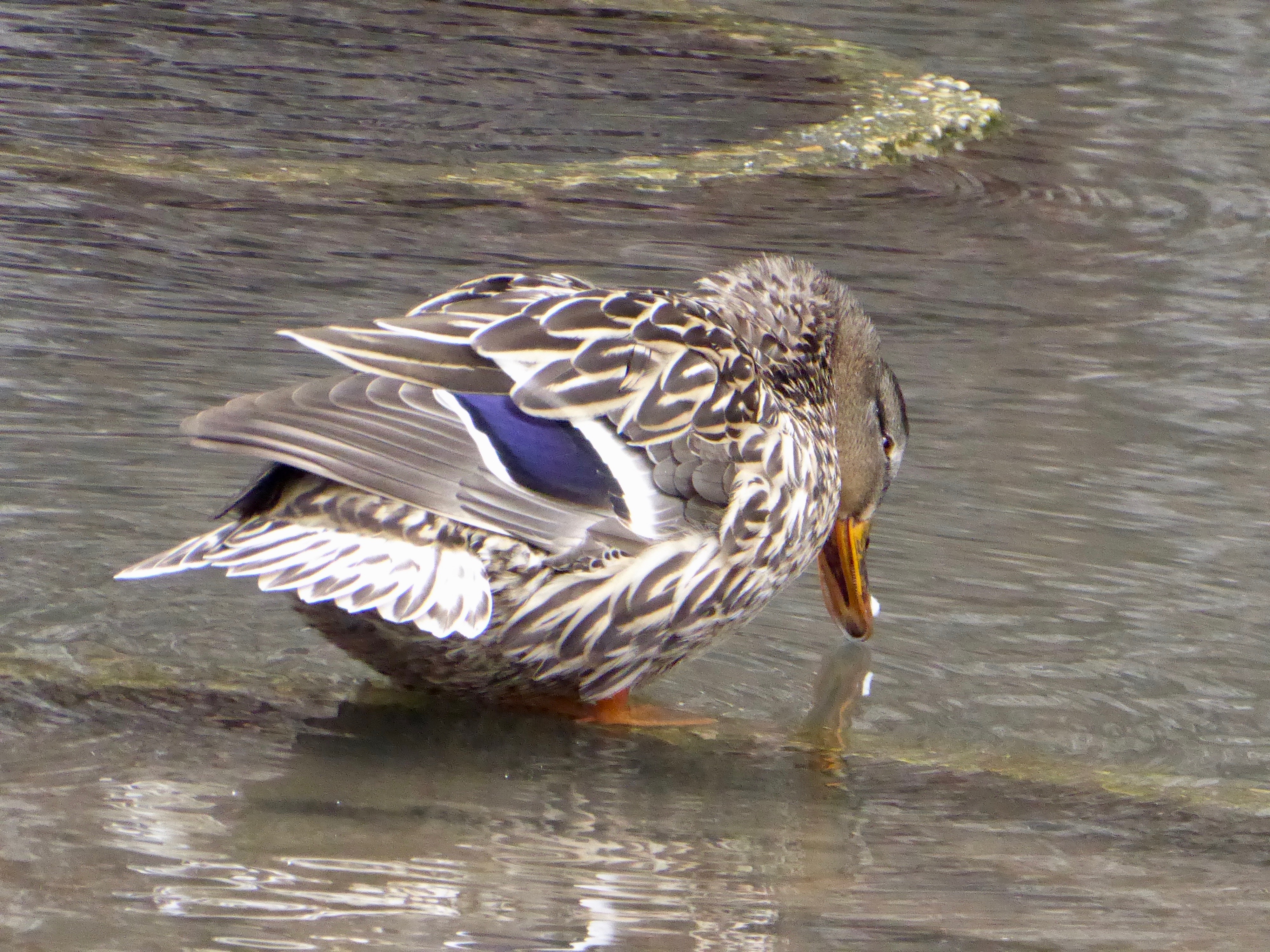 The joys of duckhood! (Honey’s to the rear.) 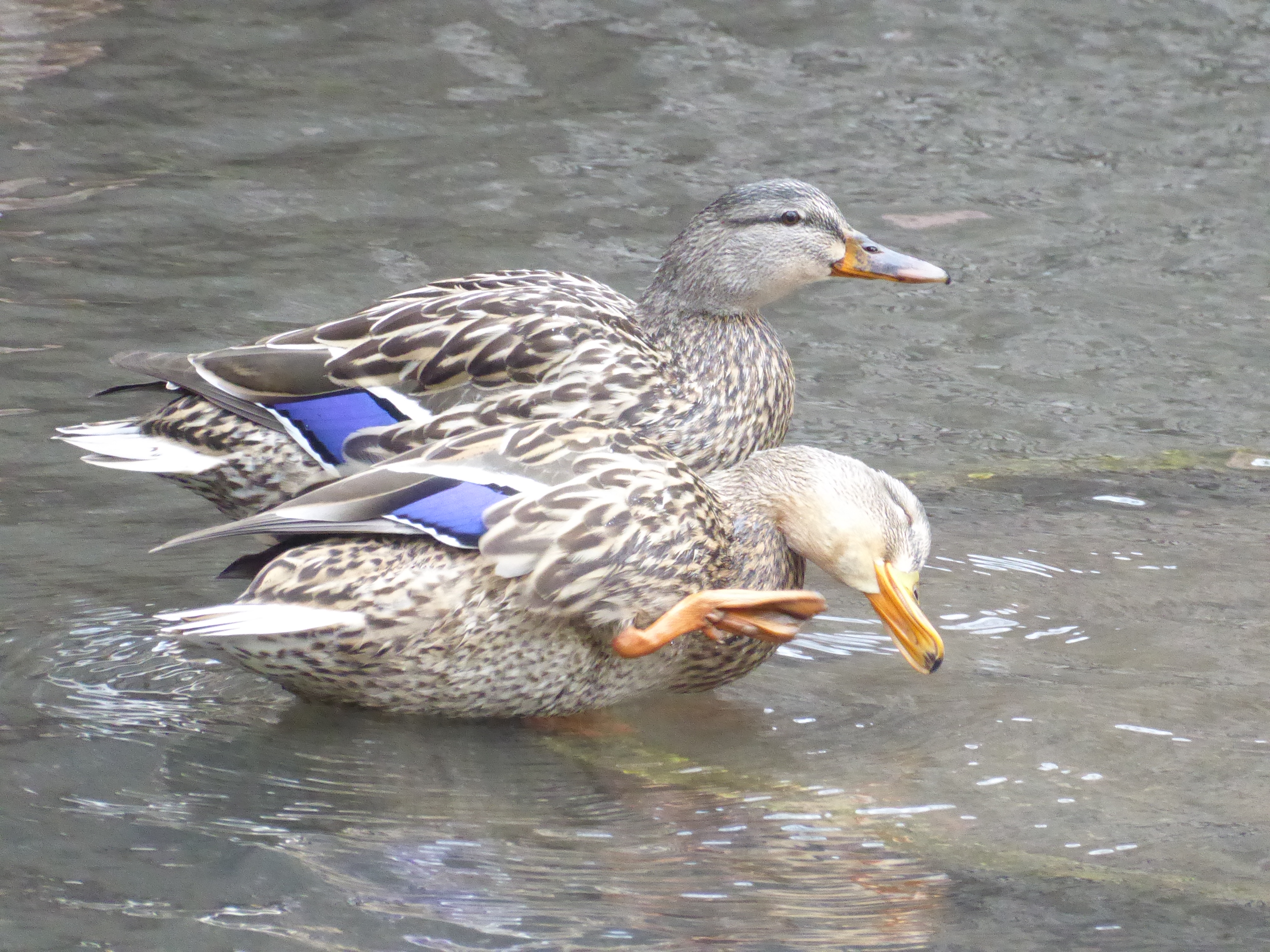 Here’s the view of the pond (through Venetian blinds) that I have from my office. I can clearly see what’s going on down there: in this case all three ducks are resting on the center ring. 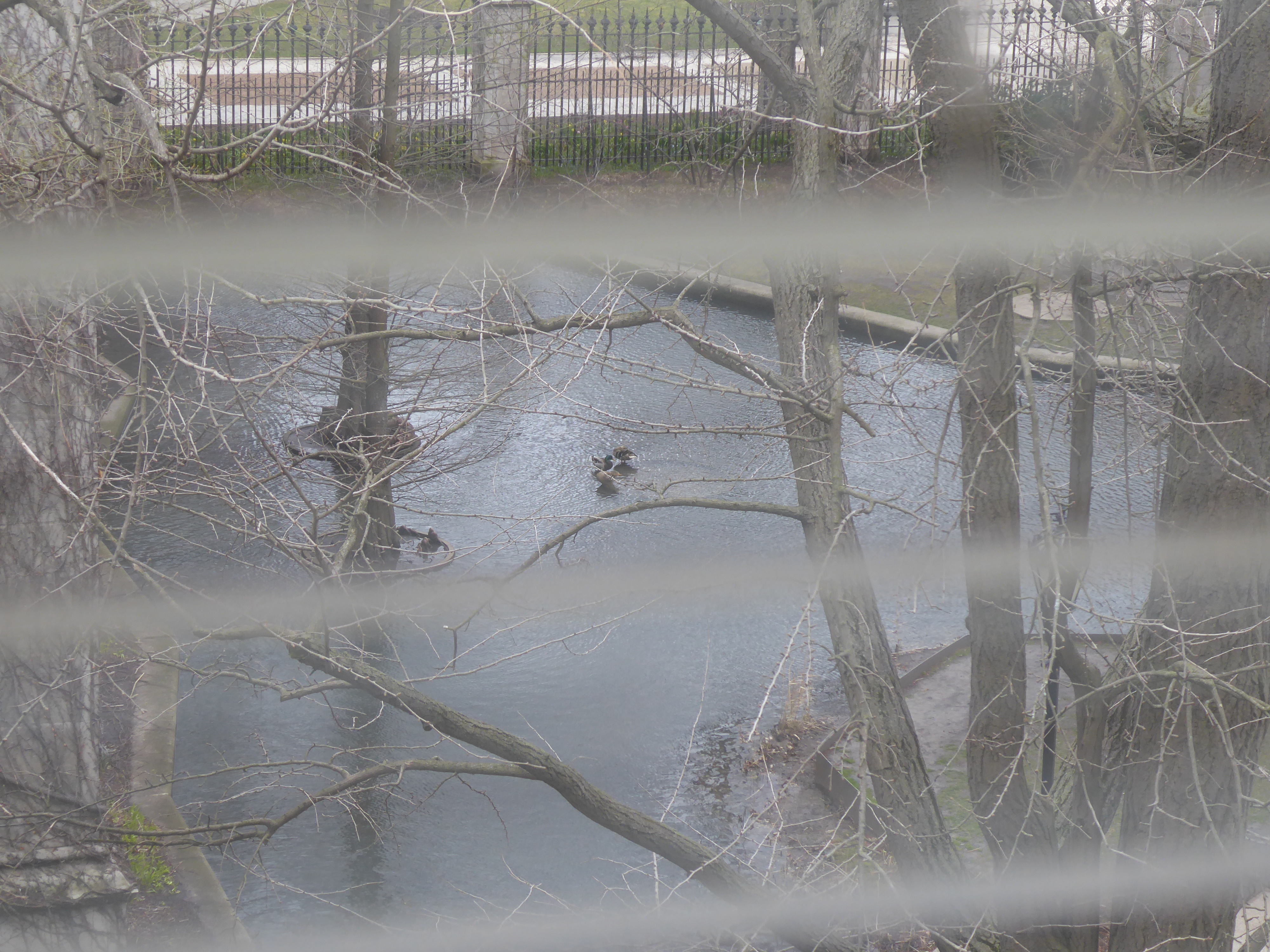