Reader Sue Davies sent a report from Australia on how they’re handling the pandemic, and gave me permission to post it. While much of her information comes from two sites (a Guardian Australia site and an Aussie federal government site), the summary and words are her own, and I’ve indented them:

The Prime Minister has set up a “National Cabinet” made up of Premiers and Chief Health Officers of all six states and the Northern Territory.  This meets daily to make decisions affecting the whole country.  All the states are implementing the same laws to ensure that the response is the same everywhere.

Presently the rules are these:

1).  No more than two people can congregate outside at any one time (excluding family members). There are stiff on-the-spot fines ($1600) for people caught flouting the rules.

JAC: Note that hairdressers are open, something that’s not the case here. I guess the violation of social distance is deemed less important than the need for tonsorial services!

3).  All state borders are closed to all traffic excluding freight, health workers. Also allowed are “compassionate grounds” travellers and people returning to their home state (who all HAVE
to go into 14 days of quarantine before they can get to their destination).

4). There are no sporting fixtures, sport training, use of outdoor gyms and playgrounds, use of public swimming pools.  And all beaches are closed.

6).  You are allowed out of  your home in order to: shop for essentials, visit doctors, visit pharmacies, get your vehicle serviced, exercise (but by yourself).

7).  The only people allowed into the country are citizens and permanent residents, who all have to go into 14 days quarantine.

8).  All aged care facilities are locked down.  No visitors.

9).  People cannot just turn up at the doctor’s premises.  They have to telephone first and the doctor will decide whether they need to attend.  Otherwise all medical consultations are done
via phone or video.  And all consultations are bulk-billed to Medicare (our universal health system) so that no-one has to pay.

10). Landlords (of both private residences and commercial premises) are not allowed to evict their tenants.

11). Fewer half of the members of Federal Parliament (both house and senate) are sitting (just enough to constitute a quorum) to prevent spreading the virus; and those who are sitting are self-isolating between sittings.

12). Wedding attendance is limited to the celebrant and two witnesses.  Funerals are restricted to 10 people.

13). Restaurants and cafes can offer delivery and takeaway only. Food courts in shopping centres may also only offer takeaway.

14). Child care centres are closed.  In most states, schools are still open but parents can decide whether to send children or keep them at home.  Schools will remain open for children of health workers.

15).  All celebrations for Anzac Day (our national day remembering war veterans) are cancelled.

It looks like we may be flattening the curve: 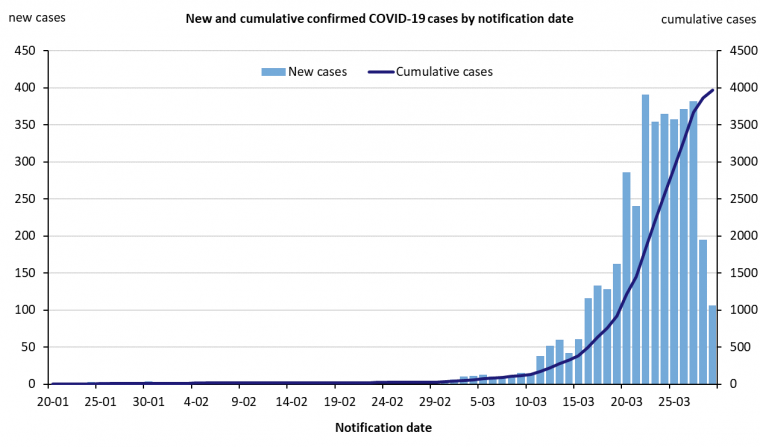 More info and graphs can be found here.

All this means that about 8 million Australians are suddenly out of work, so the government is implementing a $130b package to support employers, who keep their staff, by way of wage subsidies.  This prevents the government social-security network from being overwhelmed by out-of-work job seekersm and enables employers to retain staff (even if the business is not trading) to facilitate a smooth start-up when this is all over. It also assists people to keep paying rent and buy essentials.

The army has been deployed to help with enforcement of the rules and bans and are also employed in a couple of factories manufacturing PPE.

I think that covers most of it.  I believe New Zealand has also introduced draconian measures that seem to be working.

One thing that I didn’t mention is that there is no politicking about all this.  There are two state Labor governments and four state Liberal (conservative) governments and all are working together, including the federal opposition (Labor) to provide the best leadership possible.  It really is a “wartime” cabinet.  If only it could be like that in normal times. . .

75 thoughts on “How Australia is handling the pandemic”