One of the big mysteries of paleobiology is where complex life (i.e., animals) came from, and what the earliest animals looked like. The first traces of life that we have go back about 3.7 billion years ago, but those are cyanobacteria (the so-called “blue green algae”). The first “true cells”—unicellular eukaryotes, go back to about 1.8 billion years. But then there’s a huge gap of 1.2 billion years before we have the first traces of more complex multicellular life (putative sponges, jellyfish, and ctenophores) near the beginning of the Ediacaran period (571-541 million years ago). That fauna contained a number of bizarre and enigmatic forms.

Many of those forms went extinct without issue at the beginning of the Cambrian (about 545 million years ago). But since there was not a separate and later creation that led to modern animals (we know this from molecular data), some of the earlier fauna alive during the Edicarcan period must surely have been the ancestors of modern animals. Today’s paper involves a search for the earliest representatives of the Bilateria, a group that includes all but the simplest animals. I’ll let Wikipedia tell you what the Bilateria are:

The bilateria /ˌbaɪləˈtɪəriə/ or bilaterians are animals with bilateral symmetry as an embryo, i.e. having a left and a right side that are mirror images of each other. This also means they have a head and a tail (anterior-posterior axis) as well as a belly and a back (ventral-dorsal axis). Nearly all are bilaterally symmetrical as adults as well; the most notable exception is the echinoderms, which achieve secondary pentaradial symmetry as adults, but are bilaterally symmetrical during embryonic development.

Most animals are bilaterians, excluding sponges, ctenophores, placozoans and cnidarians. For the most part, bilateral embryos are triploblastic, having three germ layers: endoderm, mesoderm, and ectoderm. Except for a few phyla (i.e. flatworms and gnathostomulids), bilaterians have complete digestive tracts with a separate mouth and anus. Some bilaterians lack body cavities (acoelomates, i.e. Platyhelminthes, Gastrotricha and Gnathostomulida), while others display primary body cavities (deriving from the blastocoel, as pseudocoeloms) or secondary cavities (that appear de novo, for example the coelom).

So, in the fossil record, paleobiologists have been looking for animals that are bilaterally rather than radially symmetrical, with a front and back (ergo a head and anus with a gut between them), and with evidence of a coelom (body cavity). Kimberella, found in both Russia and Australia (see fossil below), is a putative bilaterian, but people still argue about whether it may be a coelenterate (jellyfish relative), animals that aren’t bilaterians. (There are also “scratch marks” associated with it, suggesting that it had a radula and may have been a kind of mollusc, which are bilaterians:

Now, however, in a new paper in the Proceedings of the National Academy of Sciences (USA), four researchers have found what seems to be an unambigous fossil of a bilaterian, as well as the burrow that it was probably making as it tunneled underneath the shallow-sea sand, feasting on microbial mats of bacteria. You can access the paper free by clicking on the screenshot below, or get the pdf here (reference at bottom).

Several of these creatures, named Ikaria wariootia, are found near “trace fossils”: tracks or burrows that were given the name Helminthoidichnites (traces of animals, like their paths, were given scientific names in the absence of the animal who made them). They are dated—using igneous material like ash, near the sedimentary layer)—to about 560-551 million years ago (dating done by correlating strata with dated similar strata in Russia).

The fossils, both animal and its tracks, are in fine sandstone from the Nilpena beds in South Australia, where fantastic Ediacaran forms have been found. And what they show are small bilaterian-looking animals ranging in size from 2-7 mm (0.1-0.3 inches): about the size of a grain of rice.  Moreover, at least one of them was associated with a trace burrow of about the size that would be made by such a creature. That one’s in the photo below. (The animal shown below was probably displaced from the burrow by movement of the substrate.) The scale bar to the right is 1 mm. Note that the burrow shows lateral “zig zags”, as if some animal was humping itself along right beneath the sand.

And there are many specimens of the creature visualized by laser scanning. They show a creature with a broad end (presumably the front) and a narrower end (presumably the rear), with all of them showing relatively similar ratios of length/width, suggesting this is not some geological artifact but a real animal. Note the broad front end (burrowers are larger in front than the rear when there’s asymmetry), as well as the bilateral symmetry:

I’m not a paleontologist, but these data and photos are pretty convincing that here we do indeed have a very early bilaterian, perhaps one close to the “common ancestor” of all animals save the few taxa listed above. (We cannot know, of course, whether this is the “common ancestor” of bilateral animals, even though the hyperventilating media suggests otherwise. But it’s certainly something that is close to what that common ancestor might have looked like.)

The evidence of bilateral symmetry is manifest in the fossils. The nature of the furrows in the sediment probably made by this creatures suggest to the authors that it has a coelom (body cavity) and musculature, while the “V-shaped transverse ridges” in the burrows suggest that it had “peristaltic locomotion” like earthworms:

Peristaltic locomotion is a common locomotor pattern in elongated, soft-bodied invertebrates, particularly in segmented worms, such as earthworms. It involves the alternation of circular- and longitudinal-muscle-contraction waves. Forward movement is produced by contraction of the circular muscles, which extends or elongates the body; contraction of the longitudinal muscles shortens and anchors the body.

That is, the movement isn’t smooth but is jerky, which would produce the ridges. To the authors, this implies a “potentially modular body construction” with the necessary muscles. The authors also suggest that “sediment displacement and scavenging reveal that Ikaria likely had a coelom, mouth, anus, and through-gut” (all traits of Bilateria).

I’ve checked with one early-life paleontologist, who says that yes, this is pretty good evidence for an early bilaterian, and the only good evidence in which a putative early bilaterian is associated with its tracks in the sediments. The authors of the paper provide a reconstruction of Ikaria and its track in the paper, which, with the color added, makes it look a bit penis-like:

This is a pretty important discovery, I think, as it gives us a glimpse of what may be the ancestor of all bilaterally symmetrical animals, including, of course, us.

Sadly, as I noted above, some news organizations say it is the common ancestor, and we have no way of knowing that. Here’s one of the miscreant organizations (Phys.org), which gets most of the stuff right but has a very misleading headline (click on screenshot). And you can blame the news site of the University of California at Riverside, which provided the article that Phys.org copied word for word. 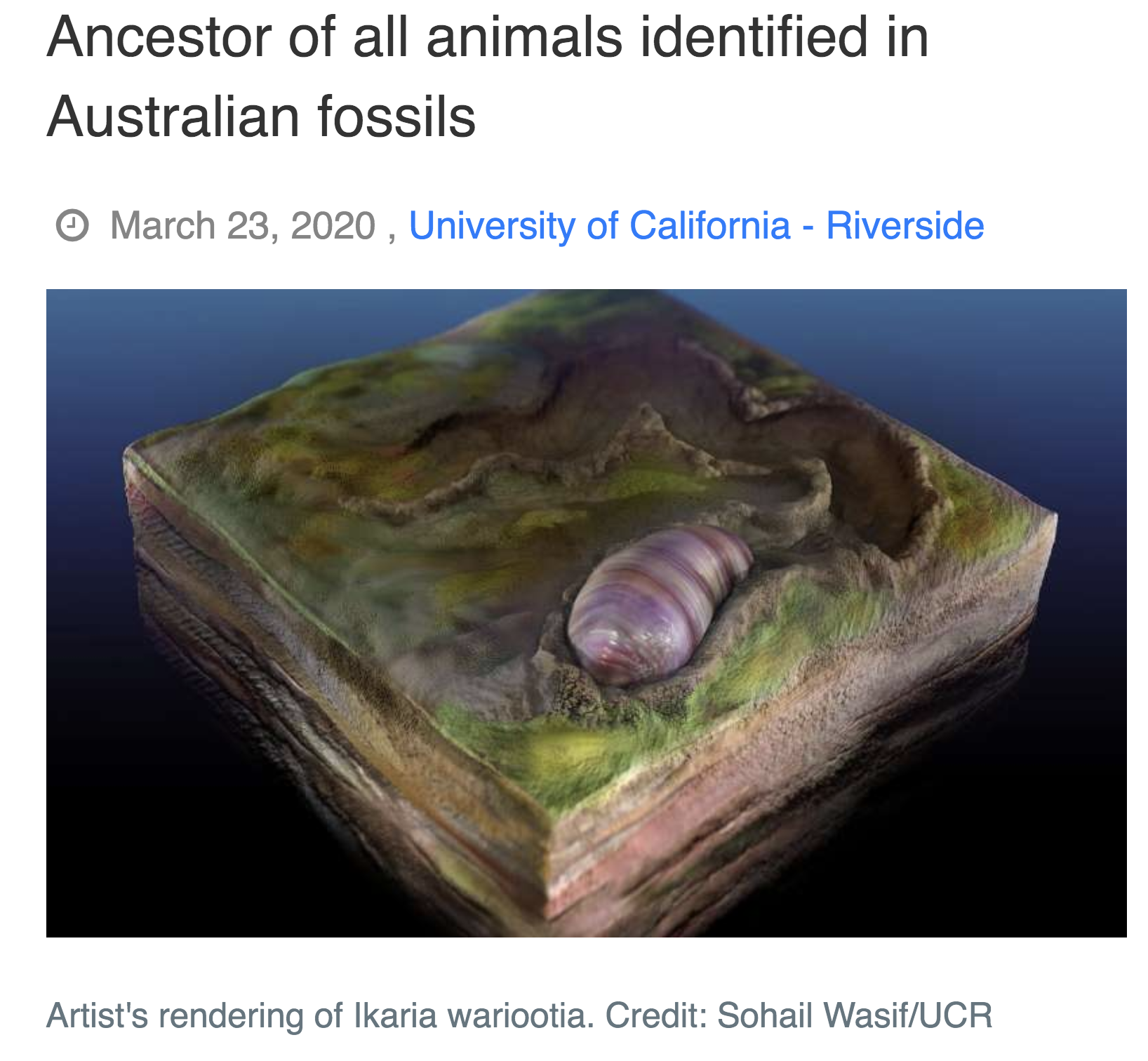 Always be wary when you see in the news that a “common ancestor” or “missing link” has been identified. In this case, the very university that was home to the first author Scott Evans badly screwed up the significance of the finding. We have no fricking idea whether I. wariootia is the “ancestor of all animals”, a claim that is flat wrong in two senses. First, sponges, coelenterates, and other radially symmetrical fauna are “animals”, but not descendants of this wormy creature. Second, we have no idea whether I. wariootia is even the ancestor of “all bilaterians.”

Now the authors themselves don’t make this claim; the blame rests on the media and on the UCR publicists, but one would think that the UC Riverside publicity department would run the headline past the researchers.

Well, never mind; it’s still an important finding and a really lovely one.

27 thoughts on “Oldest “bilaterian” found: wormlike creature discovered along with its tracks”