I’ve been to the grocery store twice in the last week; I’m not stocking up for a virus siege, as I have at least two weeks’ worth of food in my crib. But apparently lots of people are hoarding stuff, as the stores were inordinately crowded. And there were two items that stuck out from many people’s grocery carts: huge packs of toilet paper and huge plastic cartons of water bottles.

I don’t get why these items are hoarded—especially the bogroll.  I figure that a person in normal gastric condition goes through at most one roll of toilet paper per week, and that’s a generous estimate. If you do part of your excreting at work, it would be half that. And most people, if they are rational, have a good six or so rolls at home. (I have a lot more due to an unfortunate incident in which I bought t.p. at Costco and then forgot about it and did the same thing a few weeks later.) So for a family of four, you’d need 16 rolls max for a month, and I think I’m way overestimating here. Why should you buy more? It’s not as if a.) the manufacturers are going to run out of product and b.) there aren’t alternatives if things get really dire (remember what many Indians do).

Likewise, public water supplies can be disinfected to protect from viruses, as I think they already are, so unless the pipes get broken or we have a drought, why the bottled water?

I can only guess that people are panic-buying. Yes, by all means stock two weeks’ worth of food and a few extra rolls of t.p., but what I am seeing and hearing is that people are way overbuying, to the extent that stores are running out. Look at this video of Aussie going nuts in a store!

A toilet paper panic-buying stampede when Aldi store doors open in Sydney.
This is ridiculous..

I have no theories to explain the run on bogroll except for sheer, irrational panic. If you have another theory, by all means proffer it below.

Here’s a cartoon from reader Bruce, which resembles what I saw in the grocery store this week: 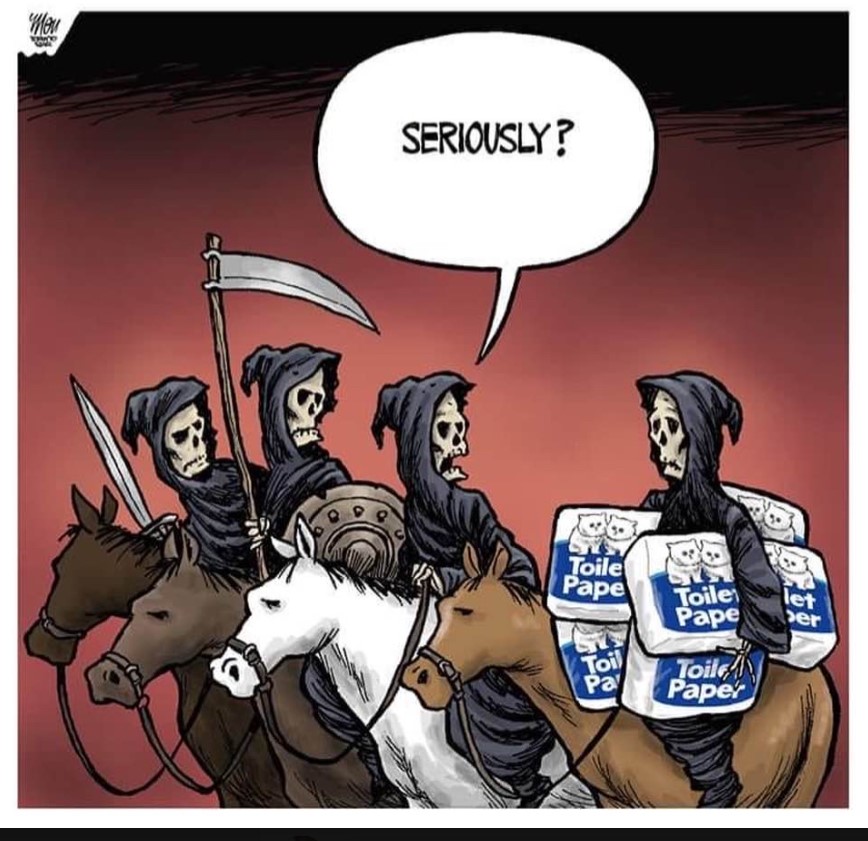 209 thoughts on “What’s with the hoarding of toilet paper and water?”