One thing that’s been missing from this election cycle—as it’s been missed in nearly every Presidential election—is questioning the candidates about their acceptance of evolution. In fact, I don’t remember Trump ever being asked this question. In 2016, the other Republican candidates mostly ducked the question (see also here), and for the life of me I can’t say that any of the Democratic candidates have “endorsed” evolution, though I suspect they would. Republicans, of course, lose nothing by denying evolution or evading its discussion, since most Americans don’t accept evolution either, and Republicans are more averse to it than Democrats. Here’s a table from a Pew Research study in 2014: 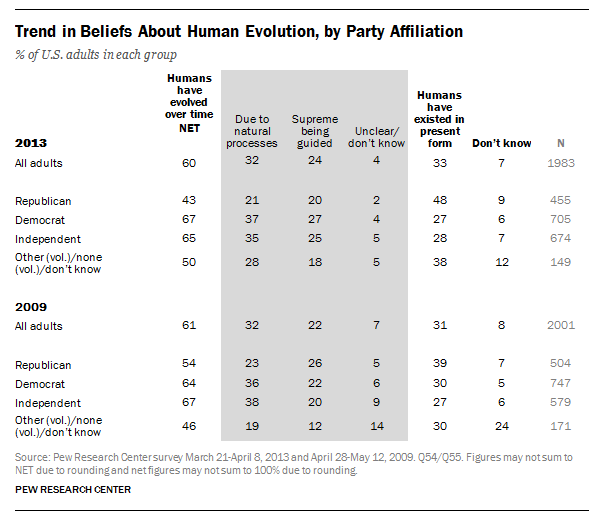 While the figures are still disappointing vis-à-vis Democrats, 27% of whom believe in young-earth creationism, that’s still more than 20 points lower than Republicans; and I can’t help but think that a Democrat who denied or waffled about evolution would hurt their candidacy. Because the evidence for evolution is so strong, asking candidates about it—like asking them about global warming—is a measure of how closely they adhere to the facts rather than to a conservative and tribalistic orthodoxy.

Nevertheless, it’s not surprising when a Republican comes out denying or questioning evolution. And now one of them, Mark Meadows, whom Donald Trump just appointed as his chief of staff, replacing Mick Mulvaney, appears to be a full-blown young-earth creationist, one who participated actively in fostering creationist lies to children by helping Ken Ham’s Answers in Genesis organization.

Meadows has been a conservative Congressman from North Carolina since 2013, and will now help run the White House. The details of his creationism are given in this story from last October’s New Yorker. It’s a bit long and tedious (there’s a shorter version here), but I’ll give the gist below. (Click on the screenshot to read the piece.)

1.) Meadows acquired a 134-acre piece of property in Colorado some time ago, and then sold it in 2014 for $200,000 to Answers in Genesis (AIG). The property was in fact in the city of Dinosaur, Colorado named because the area, and Meadows’s property, is rich in dinosaur fossils.

2.) Why are creationists so interested in dinosaurs, whose existence would seem to refute Biblical creationism? Because they maintain that dinos and humans existed at the same time—not that long ago—and not only survived the Flood, but were aboard the Ark. Here’s a summary of the AIG view (my emphasis):

Dinosaurs were created by God on Day 6 of creation, approximately 6,000 years ago, and were originally vegetarian. During the global Flood, many were buried and fossilized but two of each kind survived on Noah’s Ark. They eventually died out, due to human activity, climate changes, or other factors.

Don’t ask me how they got the big ones aboard the Ark, and how they loaded enough vegetation aboard to feed them all. (In a video above, Ken Ham suggests that it was only baby dinosaurs were on the Ark, and there were only about 50 Biblical “kinds” of dinos, which nevertheless included the T. rex “kind”.) Then, after Adam and Eve sinned, many dinosaurs, because of the Fall, became carnivorous (this is how ridiculous it gets).  Then they went extinct, which is why we don’t see them today. 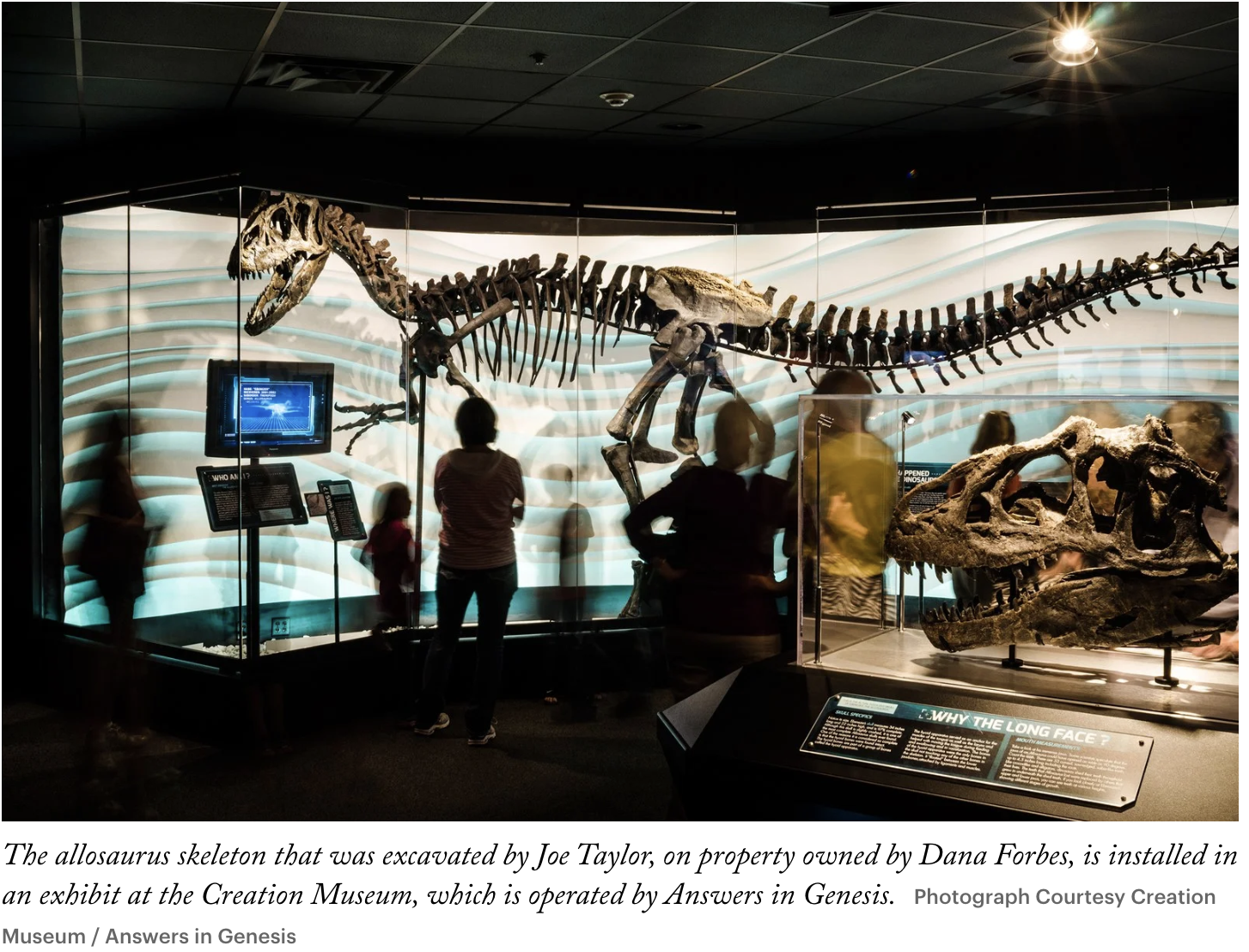 4.) The Allosaurus is the subject of a lot of the New Yorker piece, as AIG claims it was largely excavated by homeschooled creationist children, while the facts suggest that this wasn’t the case and it was professionally excavated. (Why this is so important to the article is a mystery.) At any rate, AIG made a one-hour movie about it, called “Raising the Allosaur”, which you can still find on Vimeo. I’ve put it below but haven’t watched it. Meadows is in it.

5.) Meadows did not report his ownership of the property, nor its sale, to the House Ethics committee, which is required. It’s not clear why he evaded this responsibility, but it may be to hide his connection with Answers in Genesis. That’s the official species of lying.

6.) Here’s what the New Yorker article says about Meadows’s faith; this, along with his sale of the property to AiG, is sufficient for me to accept that he’s a young-earth creationist, although he’s never openly admitted he’s one:

Meadows is very open about his faith and has been an outspoken advocate for homeschooling as a congressman. When he first ran for Congress, he was endorsed by Michael Farris, the founder of the Home School Legal Defense Association, where Doug Phillips worked before creating Vision Forum. (Farris distanced himself from Phillips following the reports of Phillips’s relationship with his nanny; Farris also insisted that he was “uncomfortable” with Phillips’s “patriarchy theory” for years, though this has been disputed.) “I think he’s one of the best members of Congress, by far,” Farris told me, of Meadows. “He’s stood up for religious freedom. He has a backbone, and he’s stood by the issues that he campaigned on.” Farris is also the founder of Patrick Henry College, which mandates the teaching of creationism and also touts the number of White House internships that its students receive. Meadows’s son is a graduate; Meadows delivered a commencement address there last year. I asked Farris whether he knew anything about Meadows’s views on the age of the Earth. “We’ve never talked about creationism, but I would assume that he, like me, believes in creation,” Farris said.

So be it. Another likely creationist high up in the government.

We still don’t know if Trump accepts evolution (he’d never admit it even if he was smart enough to understand it and accept the evidence), but it would be amusing to see a good reporter ask him about this. Imagine the brain-dumpy verbiage that would ensue! Readers may want to amuse themselves by imagining what Trump would say, and putting their speculations it in the comments.