There are many reasons why we want to know how often distinct species hybridize, i.e., form individuals resulting from the mating of a male from one species with a female from a different species. For one thing, if this kind of mixing was very frequent, it would be hard to recognize distinct species as the hybrids would form a continuum between the parents. This isn’t a problem, as species (most notably in birds, as documented in my book Speciation with Allen Orr) remain pretty distinct. But if species remain distinct despite even pervasive hybridization, as seems to happen in some groups like ducks, this is evidence that the hybrids themselves are not mating back to the parental species and blurring species boundaries. And if that’s the case, then we can ask why hybrids are effectively sterile. This could be because they are physiologically sterile, like mules, or “behaviorally sterile”: hybrids could be capable of having offspring but might have the wrong appearance or behavior to attract mates, and so would remain unmated.

But hybridization can have other evolutionary effects. It can, for example, act as a form of “mutation”: if the hybrids are fertile, there’s a chance of genes being moved from one species to another, which could then be acted on by natural selection. This phenomenon, called “adaptive introgression”, is fairly well documented in our own species: “modern” Homo sapiens, for instance, shows several genes that came from Denisovans or Neanderthals (some, like me, consider these subspecies), and were probably driven to high frequency by natural selection. This paper gives a lot of examples of adaptive introgression between more well-demarcated species.

Birds are especially good candidates for estimating rates of hybridization, as they are widely observed, there’s a whole “citizen science” project (“eBird”) in which birders and bird lovers send in records of millions of birds, and hybrids are often easily recognized.

But up to now we had very little idea of how often hybridization occurs. The only estimate, and it’s not a great or systematic one, was one made by Ernst Mayr in 1963, who claimed that he observed only about one hybrid among every 60,000 museum skins he examined: a hybridization rate of 0.00167% (0.0000167). But this low value was a purely off-the-cuff “guesstimate”.

Now, in a new paper in Evolution, three researchers used eBird data to get a better estimate of how often bird species produce hybrids. You can access the paper for free by clicking on the link below, the pdf is here, and the reference is at the bottom. It turns out that hybridization, as estimated by citizen scientists, remains low—about the same order of magnitude as Mayr’s earlier estimate.

First, how do you know when a bird is a hybrid? It’s usually done by observing a weird bird that combines the morphological characteristics of two species who have the opportunity to hybridize. (It could be verified genetically, but that’s hard to do with wild birds.) However, the intermediacy, which is rare, is usually verified by experts, which is how hybrids find their way into the eBird database.

There’s a whole site devoted to bird hybrids, and that is its two-word name. I’ll show three pictures of putative hybrids from the site. Here, for example, is a picture from Bird Hybrids of a hybrid between a mallard and a black duck:

Here’s a likely hybrid between a Great Blue Heron and a Great Egret:

And a hybrid between a Greater white-fronted goose and a Canada goose, showing the Canada goose parental species:

There are several ways to calculate hybridization rates. The simplest is just the number of hybrid birds found divided by the total number of birds observed. But bird species vary in their numbers, and if a numerous species hybridizes a lot, that could give you an overestimate of how often members of all species produce hybrids. To correct for that, you can calculate a per species hybridization rate: the total number of species that have produced hybrids divided by the total number of species observed. (You can also do this for hybridization rates between bird orders or bird families.) This of course will be higher, because a species is counted as hybridizing even if it produces only a single hybrid. Alternatively, you can take each species, calculate its hybridization rate with all other species, and then average that across all species to get an estimate of how often an average bird species produces hybrids. (That was not done in this paper.)

There are of course errors introduced by using observations from eBird. One is the assumption that hybrids are recognized as hybrids just as often as pure-species birds are recognized as pure. That’s not unlikely given that hybrids are often distinct, but it may lead to underestimates if very similar-looking species, like warblers, produce hybrids that, because the parents are similar, aren’t easily seen as hybrids. Conversely, hybridization may be overestimated because birders may report this exciting event more than once, so the same hybrid is counted multiple times. Time of year also matters, as hybrids are best recognized when the parental species are in their breeding plumage: during the mating season. I won’t go into detail about how the authors dealt with these issues, except to mention that they used location information to rule out hybrids that were reported multiple times. You can read the paper for the caveats and biases.

The methods: the authors used eBird observations reported between January 1, 2010 and December 31, 2018: nine years of data. Observations were restricted to the contiguous U.S. and submissions were scrutinized and vetted by experts.

Here are the results, all of which confirm Mayr in suggesting that bird hybridization is rare.

2.) The corrected hybridization rate eliminating possible multiple sightings of the same hybrid: 0.076%, about the same as the uncorrected rate.

3.) The hybridization rate eliminating species that were very prone to hybridization. Eliminating the 10 most frequently hybridizing species, mostly ducks and gulls, which hybridize like gangbusters, brought the hybridization rate down to 0.009%, about 5 times higher than Mayr’s rate. It turns out that the families Anatidae (ducks) and Laridae (gulls) contributed 83% of all bird hybrids in the dataset.

4.) The species hybridization rate: 242 species were implicated in forming hybrids out of 1146 species available giving a frequency of 21% of species forming hybrids at all. 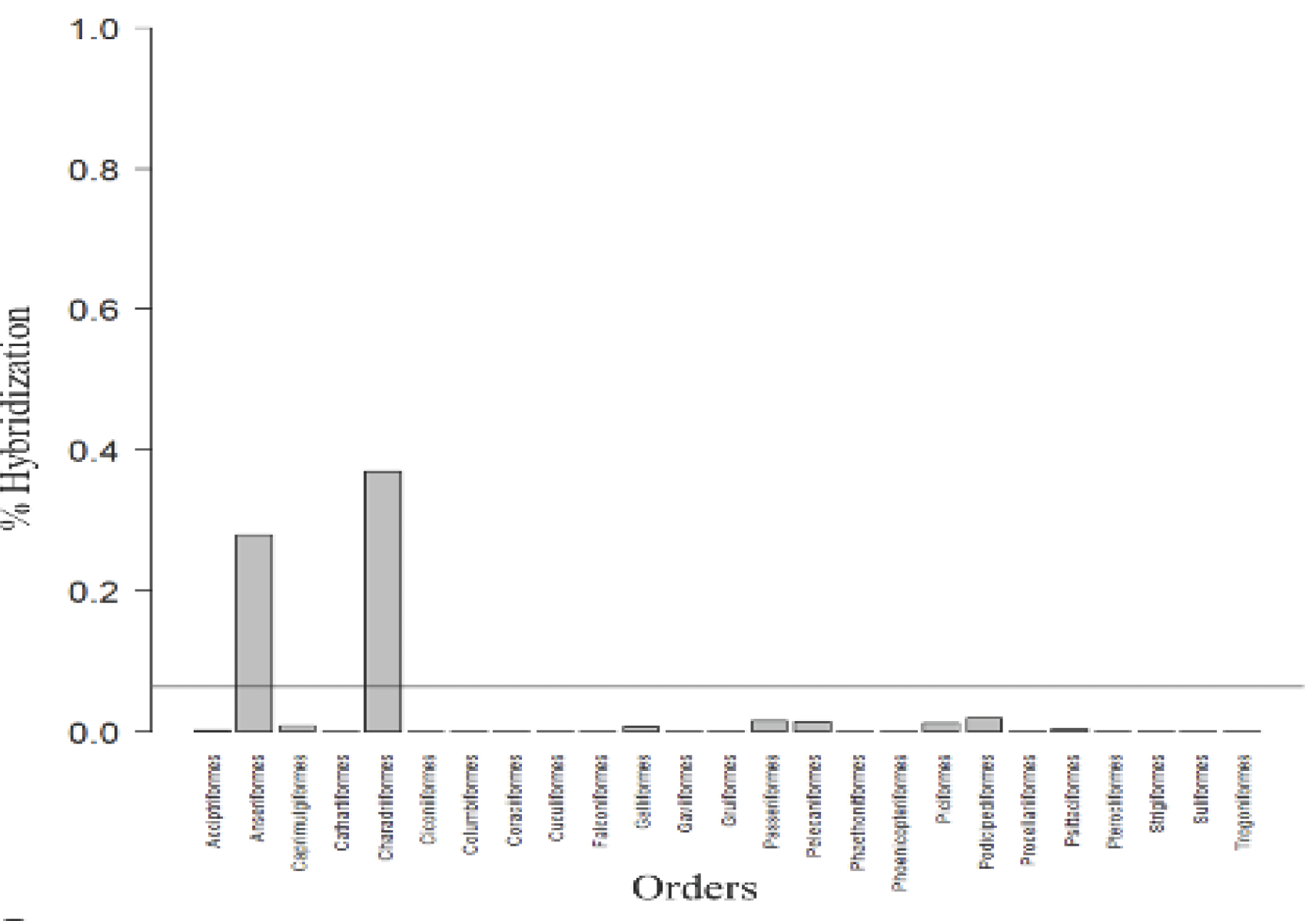 6.) The family hybridization rate. there are 95 bird families in the U.S., and 35 had species involved in hybridization, giving a rate of 37%.

The upshot. Correcting for multiple reports of hybrids and eliminating the sluttiest species of birds, the researchers got a rate of about 5 hybrids per 60,000 species: five times higher than that of Mayr—but Mayr’s value was unreliable to begin with. This still means, however that bird hybrids are rare. Here are the data shown graphically in the paper, with the hybridization rate going down as the sluttiest species are removed (oy, the mallards!): 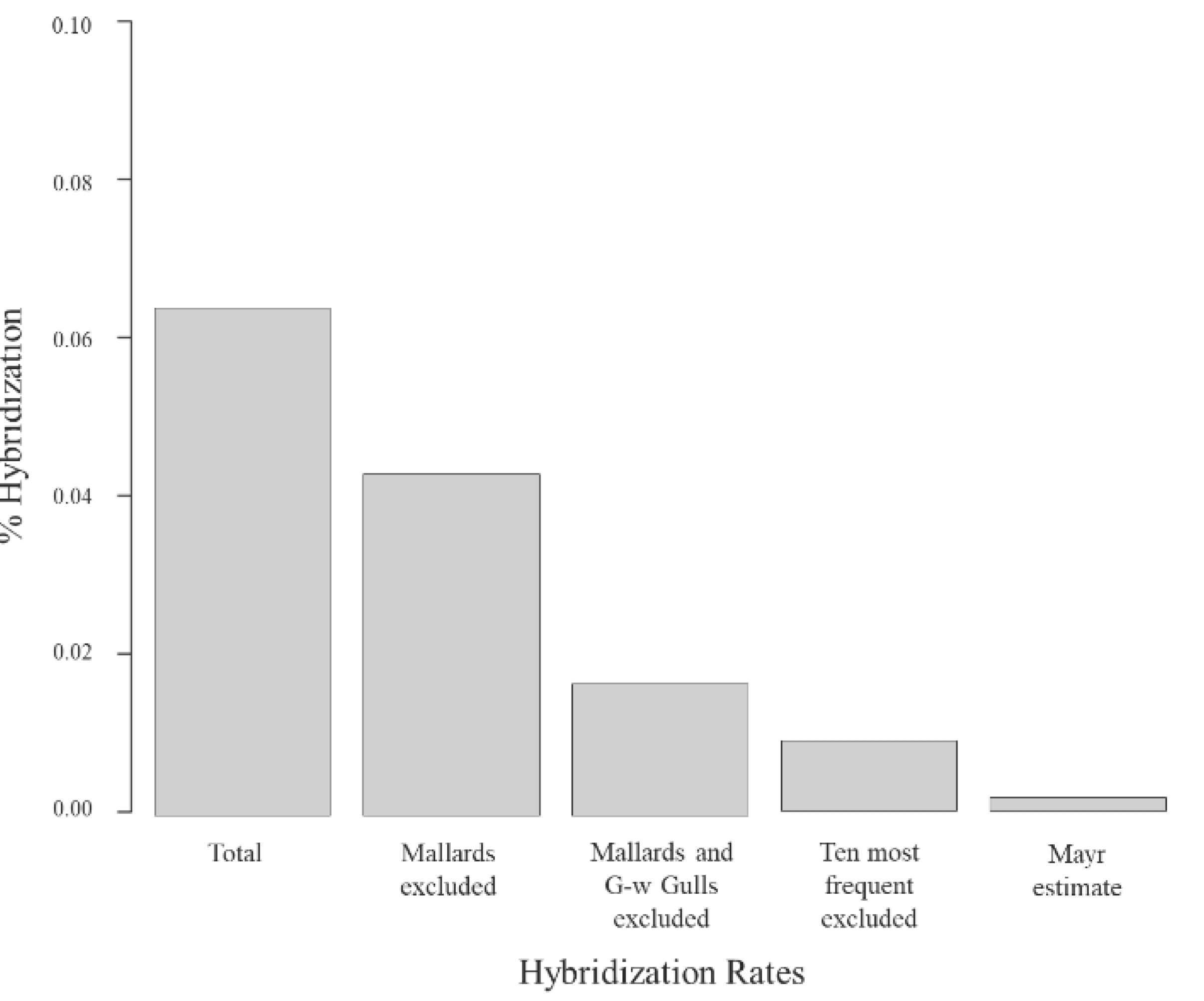 Are there any implications beyond this? Yes. First, there are observations by my colleague Trevor Price and his associate Michelle Bouvier that crosses in captivity between members of different genera and even families can produce viable hybrids, at least in the “lab”. The absence of such hybrids from nature means either that prezygotic isolation (mating discrimination and other impediments to gene flow that operate before copulation) is very strong, or that viability of hybrids in nature is much lower than observed in captivity. (It’s probably a combination of both factors, but I suspect that mate discrimination is quite strong in the wild, and can be overcome by forcibly confining birds in captivity.)

Second, the genetic data from birds, particularly mitochondrial DNA, shows that species remain quite distinct, with species-specific DNA sequences as judged from their “bar codes”.  This shows that despite even the low rates of hybridization, hybrids are not putting foreign genes into other species very often.

34 thoughts on “How often do bird species hybridize?”