Religion is often touted as essential as a kind of secular glue, keeping society moral and empathic. Indeed, some say that even if there isn’t any evidence for a God, we should promote belief anyway because of its salutary side effects—the “spandrels” of belief.

This “belief in belief” trope, as Dennett calls it, is counteracted by lots of evidence, including the observation that there’s a negative correlation between the religiosity of a country and both its “happiness index” and various measures of well being. Because this is a correlation rather than a causation, we can’t say for sure that religion brings countries down while secularism brings happiness, but there’s certainly no support at all for the thesis that religion promotes well being.

That’s the point made in this new article in The Washington Post. It’s a response to Attorney General William Barr’s recent claim, in a speech at Notre Dame, that religion is essential to maintain morality and that its erosion causes dire consequences. Some of Barr’s quotes from that talk:

Modern secularists dismiss this idea of morality as other-worldly superstition imposed by a kill-joy clergy. In fact, Judeo-Christian moral standards are the ultimate utilitarian rules for human conduct.

They reflect the rules that are best for man, not in the by and by, but in the here and now. They are like God’s instruction manual for the best running of man and human society.

By the same token, violations of these moral laws have bad, real-world consequences for man and society. We may not pay the price immediately, but over time the harm is real.

Religion helps promote moral discipline within society. Because man is fallen, we don’t automatically conform ourselves to moral rules even when we know they are good for us.

But religion helps teach, train, and habituate people to want what is good. It does not do this primarily by formal laws – that is, through coercion. It does this through moral education and by informing society’s informal rules – its customs and traditions which reflect the wisdom and experience of the ages.

In other words, religion helps frame moral culture within society that instills and reinforces moral discipline.

And, added Barr, the rise of secularism is accompanied by a moral decrepitude afflicting America:

By any honest assessment, the consequences of this moral upheaval have been grim.

Virtually every measure of social pathology continues to gain ground.

In 1965, the illegitimacy rate was eight percent. In 1992, when I was last Attorney General, it was 25 percent. Today it is over 40 percent. In many of our large urban areas, it is around 70 percent.

Along with the wreckage of the family, we are seeing record levels of depression and mental illness, dispirited young people, soaring suicide rates, increasing numbers of angry and alienated young males, an increase in senseless violence, and a deadly drug epidemic.

As you all know, over 70,000 people die a year from drug overdoses. That is more casualities in a year than we experienced during the entire Vietnam War.

I will not dwell on all the bitter results of the new secular age. Suffice it to say that the campaign to destroy the traditional moral order has brought with it immense suffering, wreckage, and misery. And yet, the forces of secularism, ignoring these tragic results, press on with even greater militancy.

In response, columnist Max Boot cites some statistics that counteract Barr’s claims, and also give results of an international survey showing, as such surveys invariably do, that religious countries are not better off. Click on the screenshot to read the article: 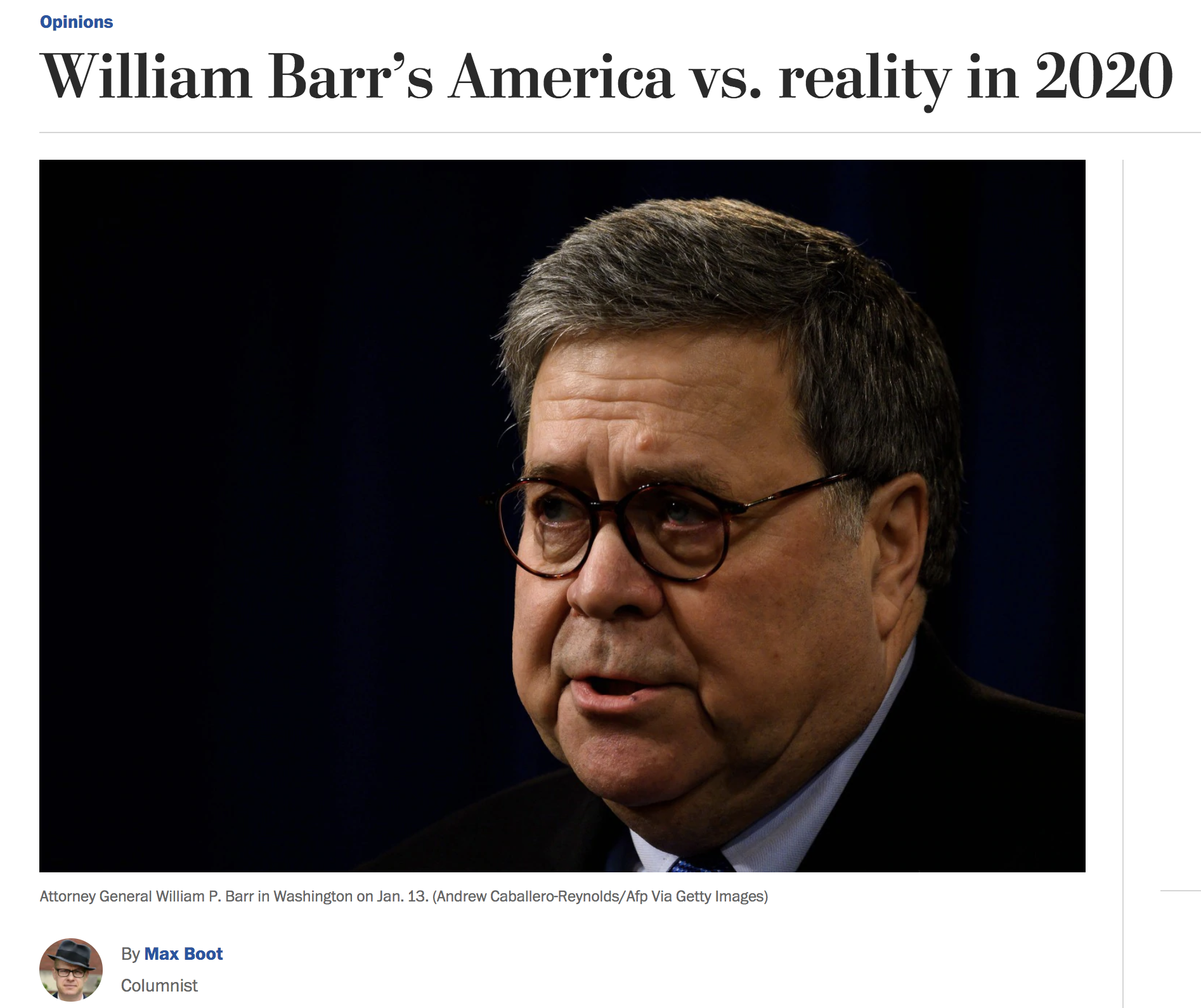 Barr’s simplistic idea that the country is better off if it is more religious is based on faith, not evidence. My research associate Sherry Cho compiled statistics on the 10 countries with the highest percentage of religious people and the 10 countries with the lowest percentage based on a 2017 WIN/Gallup International survey of 68 countries. The least religious countries are either Asian nations where monotheism never took hold (China, Japan) or Western nations such as Australia, Sweden and Belgium, where secularism is much more advanced than in the United States. The most religious countries represent various faiths: There are predominantly Christian countries (the Philippines, Papua New Guinea, Armenia), Muslim Pakistan, Buddhist Thailand, Hindu India — and countries of mixed faiths (Nigeria, Ivory Coast, Ghana, Fiji).

Now there are data from 68 countries in this survey, but they show various indices of well being in only the 10 most religious and ten least religious. But the differences are still striking: 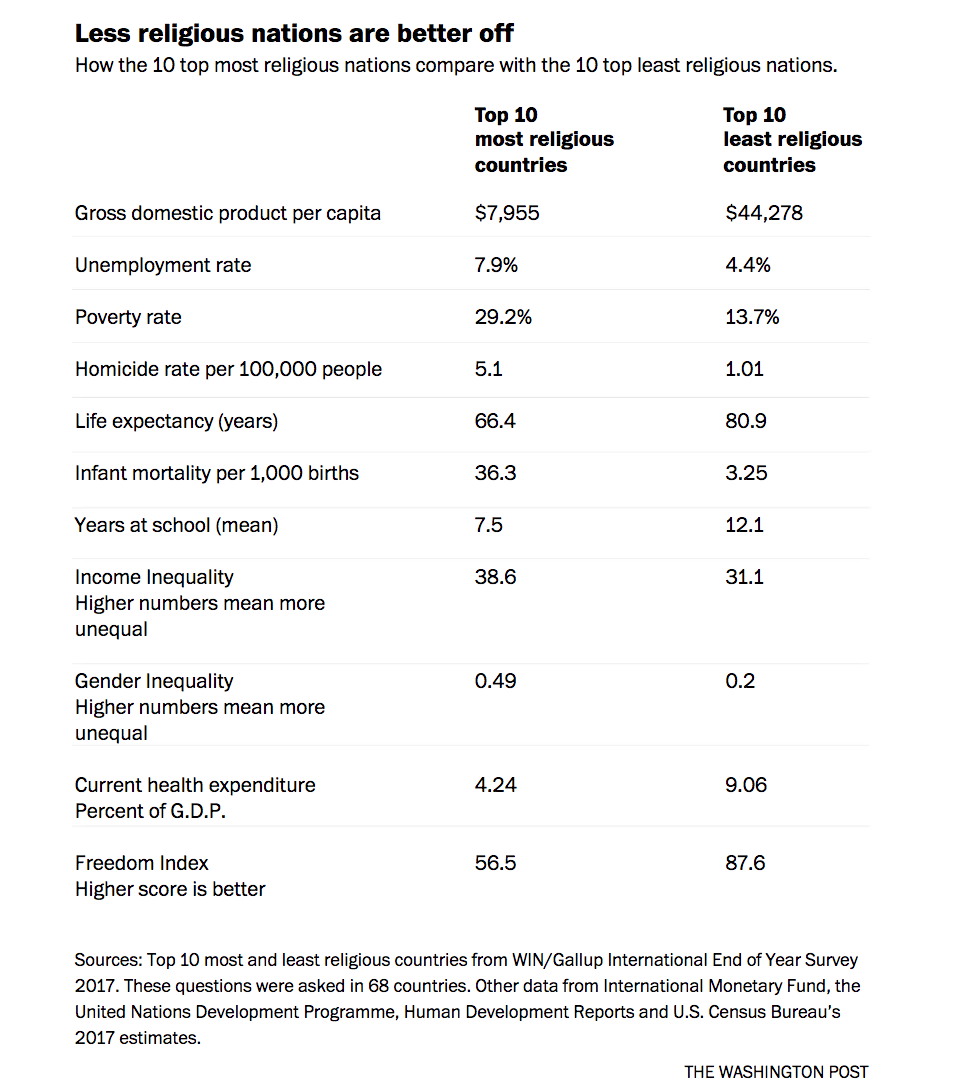 However, I’ve also published data (analysis by readers) on a lot more countries showing that the more religious the country, the less happy are its inhabitants: there’s a strong and significant negative correlation between the UN’s “happiness index” and religiosity among dozens of countries. Further, you see the same negative correlation between the religiosity of countries and various indices of their well-being, like their rank on the “successful societies” scale. This is also true among states within the U.S.

Further, among many countries, the index of poverty—how poor a country is—is positively correlated with religiosity.

Again, these are correlations, and not necessarily causal relationships. It’s possible, for example, that other factors play a role. In fact, I think they do, but they surely don’t point to religion in any way as promoting either morality or well being.

My theory, which is not mine but that of many sociologists, is that religion (as Marx maintained) is the last resort of a population which has poor well-being. Suffering and povery-stricken people look to God for help and succor when their society can’t provide them. That could cause the correlation. In other words, religiosity doesn’t cause dysfunctional societies, but dysfunctional societies maintain religiosity because that’s the only hope people have. And of course maintaining such hope erodes the will of people to actually do something to improve their society.  Further, as well being increases, religiosity diminishes as the eternal press of secularism in the modern world no longer comes up against impediments.

As I wrote previously:

Although I’m not a Marxist, Marx may have gotten it right when he said, “Religion is the sigh of the oppressed creature, the heart of a heartless world, and the soul of soulless conditions. It is the opium of the people.”

Fundamentalists may be unhappy that religious observance has declined over the decades, but the data shows that, by most measurements, life has gotten much better for most people. There is little evidence that a decline in religiosity leads to a decline in society — or that high levels of religiosity strengthen society. (Remember, Rome fell after it converted to Christianity.) If anything, the evidence suggests that too much religion is bad for a country.

Well, I’d put it another way: if a country is not well off, it tends to retain religion. But never mind: the conclusion of myself, Boot, and many sociologists—that there’s no evidence that high religiosity improves society—remains sound. I can’t imagine a survey of well being and religiosity that shows a positive relationship, and I know of no such results.