Shohreh Bayat is an Iranian chess master and an arbiter, or trainer, for FIDE, the international chess organization. Here’s her FIDE profile, in which she wears the obligatory hijab (click on screenshot to see more information on the profile): 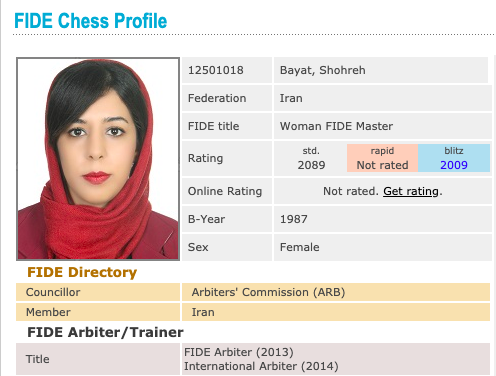 But it’s that hijab, or rather the lack thereof, that got her into trouble, but also shows us that she’s one of those brave Iranian women who fights their government’s sexist laws.

Bayat describes what happened to her in this poignant article in the Washington Post (if you’re paywalled, copies are available via judicious inquiry). 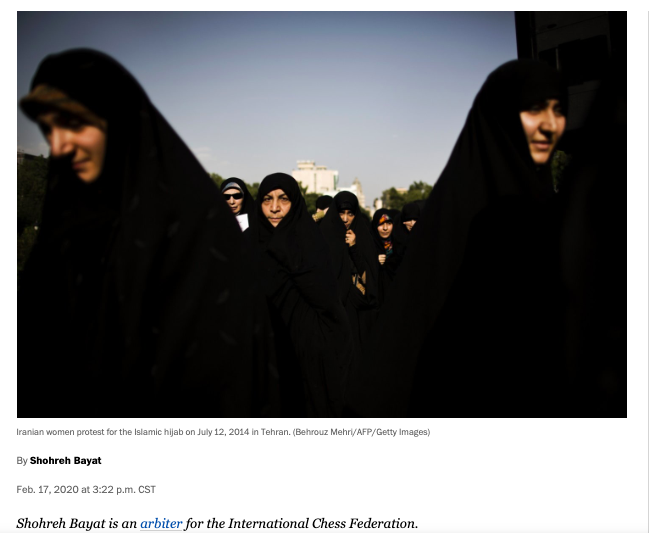 Bayat loved chess but also was losing her faith in Islam. And she didn’t want to wear the hijab, which of course is obligatory in Iran, but is also obligatory for women representing Iran overseas. It wound up putting her at odds with her government’s chess federation. As she writes:

When traveling abroad for chess tournaments, I admired the young women from other countries who wore nice clothes, their hair beautifully styled. I gradually began to spend more time in front of the mirror, trying to find ways, within the confines of my fabric prison, to appear normal.

Whenever I went abroad, I would make small changes in my appearance, perhaps by showing more hair than previously, even if I was careful to keep a portion of it concealed. Eventually, I gained a degree of renown as an international chess arbiter, working at tournaments around the world. I slowly became braver in loosening my hijab on those trips.

In 2017, I was honored to be the first woman ever appointed general secretary of a sports federation in Iran. But holding the position meant also enduring continual harassment by Iranian Chess Federation officials about the hijab. The next year, I resigned in frustration.

That didn’t end the conflicts over the hijab. I continued to travel as an arbiter for the International Chess Federation and was pleased to be chosen for the Women’s World Chess Championship 2020. When packing to travel to Shanghai for the first leg of the championship last month, I included several colorful scarves, which was the most daring I could be within the confines of Iranian law.

In short, when in Shanghai she wore a very loose hijab, and photos of that were sent back to Iran. She got in big trouble, and was urged by Iranian officials to write a letter in support of the hijab.

She couldn’t do it, and now, as she reports, she’ll never be able to go back to her homeland. Even if she wears the hijab upon a return, she’d probably still be clapped into prison. She’ll never see her friends and family again, all because she wore a loose head covering.

Her ending is ineffably sad:

How could I write a letter proclaiming what I don’t believe? Was it not humiliating enough that I had had to endure this detestable scarf on my head every day? The pain was enormous, the tears endless.

The next day, condemned already, I left the scarf behind and entered the world with determination and satisfaction. The Iranian media reported, without evidence, that I had applied for asylum. (No country was named.) I was still at the tournament, with weeks to go, and had a return ticket to Tehran. I wanted to go home, but by now it was too dangerous.

As I write to you, I am in Britain — a lovely country, where I have received much kindness and generosity from the chess community. I don’t know what the future holds.

I have seen many words of support from U.S. embassies around the world. That is touching, but also poignant, given that most Iranians can no longer enter the United States. Is it really against the law to be born Iranian? We are also humans, you know.

The policy to prohibit Iranians from entering the U.S. is Trump’s, of course, and wouldn’t it be lovely to have this brave woman in America? So a double pox on Trump’s policy and on Iran, and a blessing from Ceiling Cat on Bayat and all the women of Iran who stand up against their oppressive and misogynistic theocracy.

22 thoughts on “A loose hijab spells trouble for an Iranian, even overseas”