When I started this website in 2009, my intention was just to publicize my new book, Why Evolution is True. On the advice of my publishers, I created a site with the idea of occasionally posting new evidence for evolution to complement what was in the book. I expected to post about once a month or so.  Well, what a monster this has become!

But today I’m writing about some new work that fits perfectly with the original aim of this site. It’s a paper in the Proceedings of the Royal Society by Kathryn Kavanagh et al. that gives developmental evidence for the five-toed ancestry of modern one-toed horses. You can read the paper by clicking on the screenshot below or reading the pdf here ; a full reference is at the bottom. If you want a short but less informative piece, the New York Times has a report.

Lots of organisms show developmental evidence for their evolution from very different ancestors; I describe some of this in chapter 3 of Why Evolution is True.  Embryonic dolphins, for example, develop hindlimb buds, which in their four-legged ancestors went on to become legs, but in the dolphin the buds regress before birth, leaving newborns with no hind limbs. We humans, like all terrestrial vertebrates, begin development by forming what go on to become gill slits in our fishy ancestors. In reptiles, amphibians, and mammals, though, those gill slits are transformed into other stuctures, like our esophagus.

In my evolution class I talk about the lanugo: the thick coat of hair that human fetuses develop at about six months after conception. It’s shed before birth—but not in chimps, our closest relatives, who are born hairy (remember: we are the “naked ape”). The transitory formation of that coat of hair in our species, which is of no use to the embryo, can be explained only by our descent from a primate with hair.

So if these transitory features disappear, why do we see them at all? We’re not sure, but their appearance may be necessary to provide developmental “cues” for the appearance of features that do remain. Remember, development is a very complex process which requires a nexus of coordinated features appearing at the right times. In the dolphin, for instance, the hind limb buds may provide cues for the development of other skeletal structures, and then disappear because they are no longer needed, for natural selection would remove them because they’re cumbersome, a waste of resources, and unnecessary in a marine mammal.

Horses are another example. We know from the fossil record that modern horses evolved from five-toed ancestors, but what we have left, the lower leg and hoof, are the remnants of only the middle toe. The other four toes disappeared over time (we can see this in the fossil record), though the two toes flanking the middle one remain as vestigial “splint bones” on the horse’s leg. The outer two toes are gone completely. Here’s a drawing of one of the vestigial toes in a modern horse: a splint bone (lateral view; there’s one on the other side, too):

But you can see all five toes if you look closely during development, as reported in this new paper. If you get horse embryos at the right early stage of development, you can see the primordia for all five toes forming, with the outer ones fusing and shrinking to leave only the middle toe, which becomes the lower leg and hoof. Previously, nobody had been able to see this evidence of ancestry in embryos, but Kavanagh et al. managed to get the right material.

The authors procured (don’t ask me how) horse embryos from artificially inseminated mares, and analyzed four of them by making tissue sections of embryos between days 29 and 35 after copulation. (There is a very narrow window of time to see the primordia for all five digits, as shrinkage and disappearance of the four superfluous ones is fast.)

First, here’s a diagram of what the primordia look like. On the right side you see the evolutionary progression of horse ancestors (also shown below), starting with five, then four, and then three, with the two side toes gradually being reduced to the splint bones. We’re not sure why this happened, but a likely explanation is that at the time these horses were evolving—and they evolved in what is now North America—the climate was drying up and the forests of the West were giving way to grasslands. While toes are good for running fast around trees and vegetation, if you’re escaping predators in a featureless grassland, you want a hoof to run fast and straight.

On the left side, in blue, are the toe primordia in four embryos; those blue bits are regions where cartilage would normally condense and then bone would form. (“FL is “foreleg” and “HL” is “hindleg”). You can see that two of the embryos have five primordia early on, with the central one, which becomes the lower leg, being the largest, as it’s the toe that will become the hoof. The other two embryos have three primordia, with the central one the largest.

Here’s a photo of the two embryos showing five toe primordia at different points along the legs. You can see five shadowy primordia, with the largest in the middle in (b) of embryo 1 and (g) of embryo 2. (“Proximal” is toward the body and “distal” is toward the future hoof.) In later embryos studied by other people, the big primordium in the middle goes on to develop into the lower leg and hoof, and the others disappear.

Now of course we don’t need this kind of evidence to show evolution, or even to show evolution of toe loss in horses, as we have an excellent fossil record of horses and a good idea of their “family tree”. Here’s a figure from the Encyclopedia Brittanica: 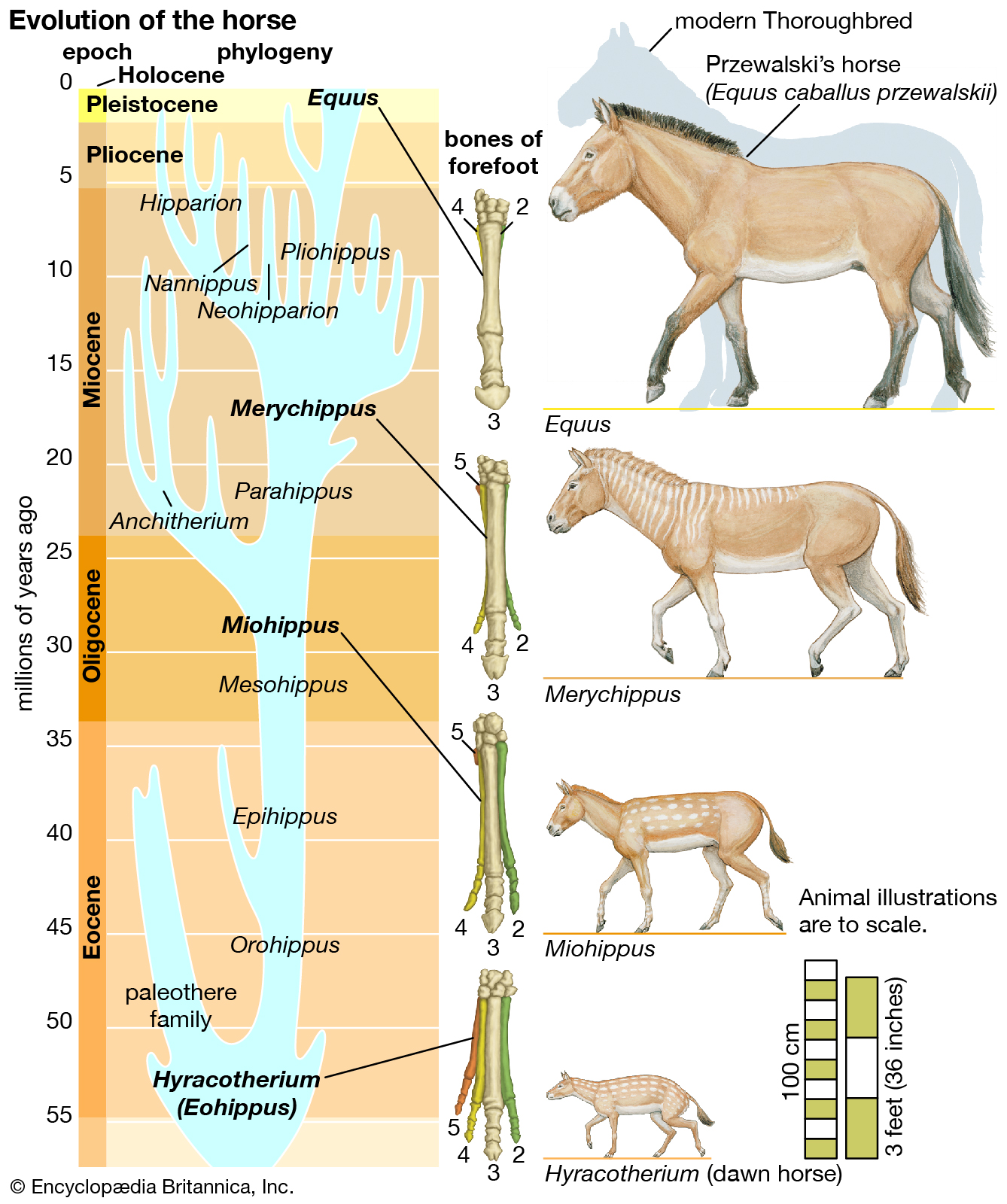 But the developmental evidence is a nice confirmation of what the fossils tell us, and add the information that the evolutionary sequence of toe loss is mirrored in the developmental sequence of modern one-toed horses. This is a version of the “biogenetic law” stating that “ontogeny recapitulates phylogeny” (i.e., development mimics evolutionary history). That law has many exceptions, for sometimes the ancestral stages are competely lost in embryos, but it does hold for horse toes. First five, then three, then one—in both development and in the fossil record.

By the way, sometimes the side toes don’t disappear, but, probably through a screwup in development, form rudimentary adult toes, producing polydactylous horses like this one: 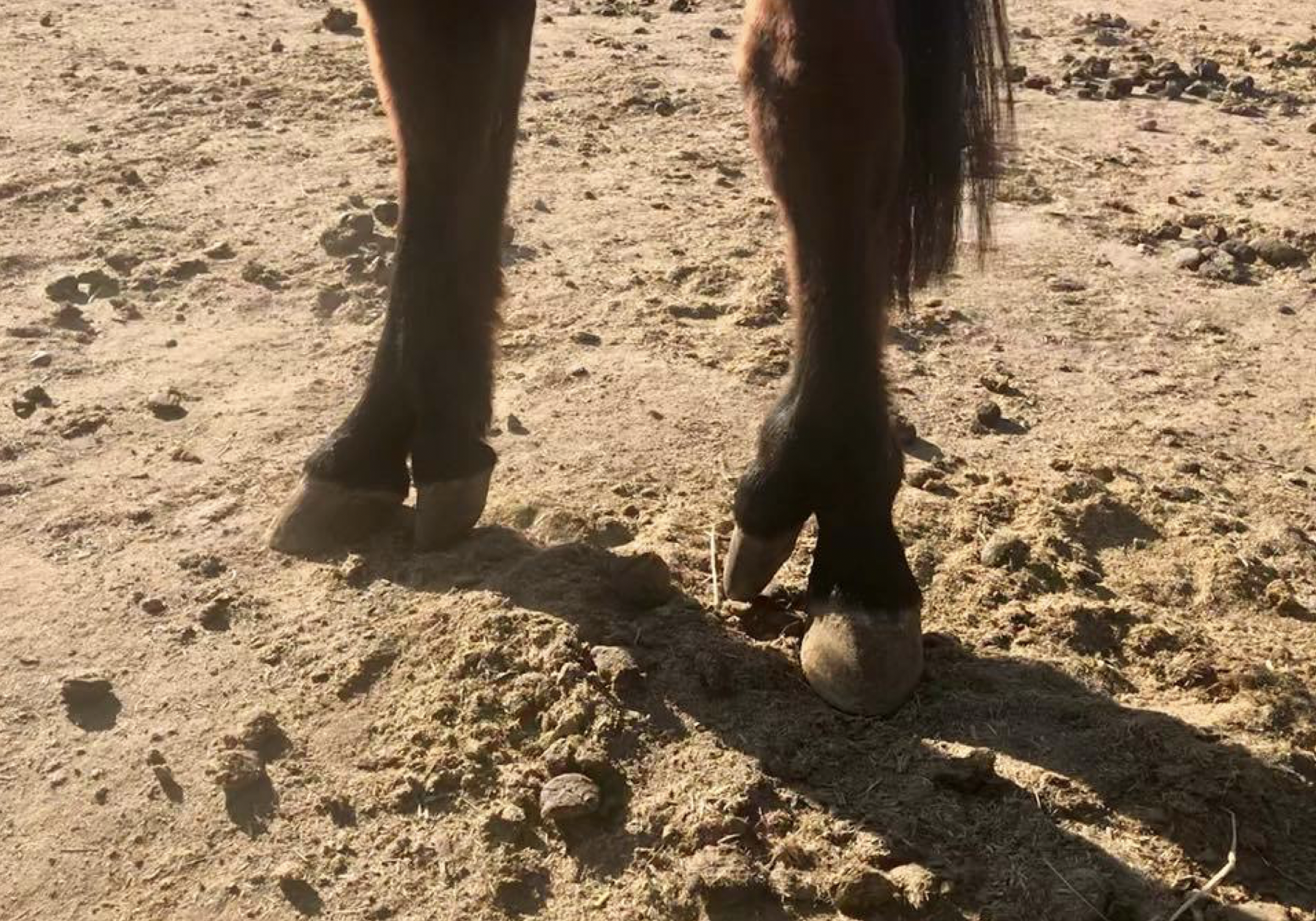 Similarly, sometimes the dolphin’s hind limbs don’t disappear and we get dolphins with little legs sticking out of its rear, like this one that I show in my “evidence for evolution” talk: 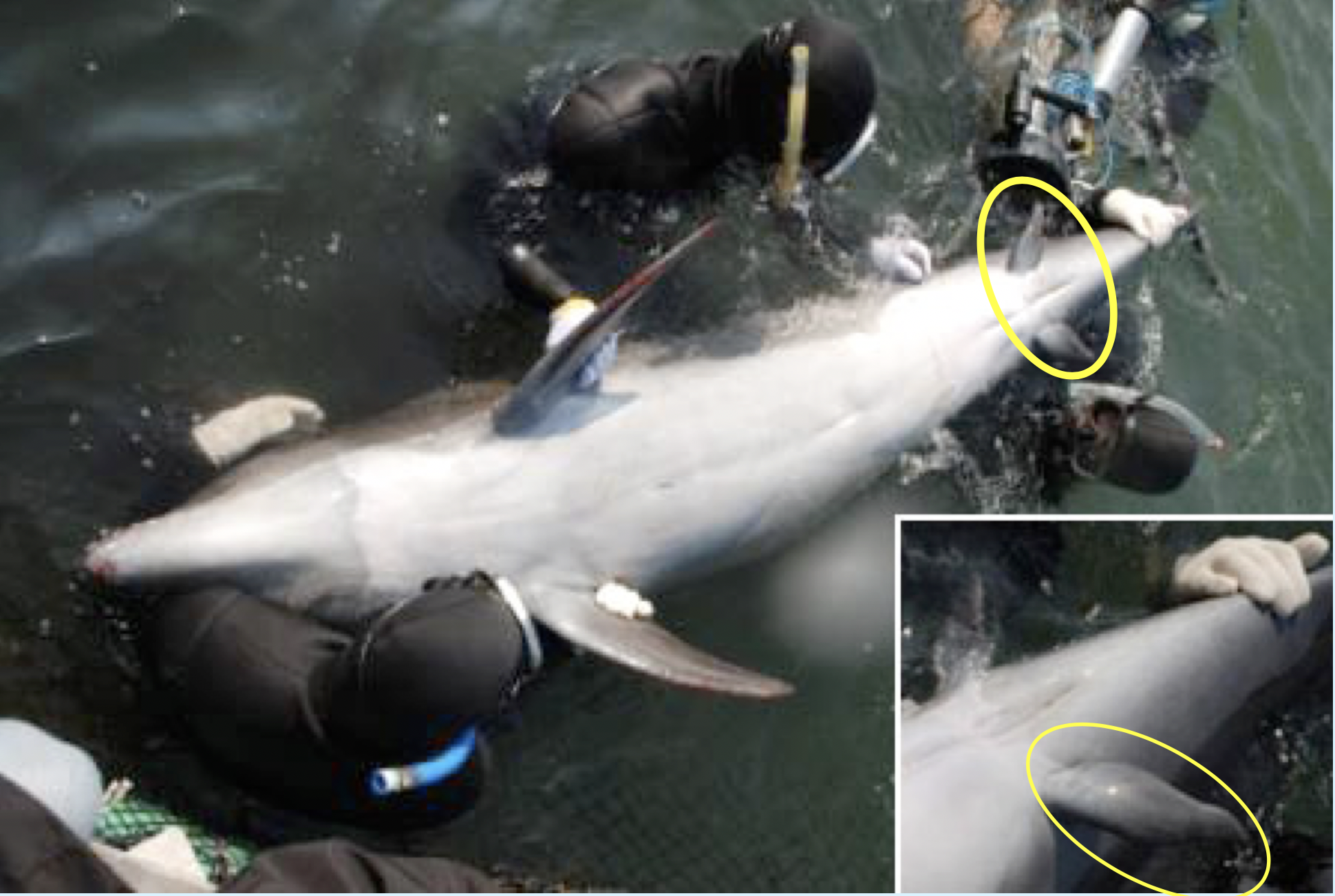 UPDATE: I forgot to include the authors’ point that many vertebrates have lost toes from the ancestral five, and that these species are ripe for embryological investigations of the type shown here. They give a table of some of these animals. Would embryos of the camel or the three-toed jerboa, for instances, show five toe primordia that are then lost? We don’t know if this is the case, and the absence of five primordia wouldn’t disprove evolution, for the retention of toe primordia is a lucky (for us) feature of development, but isn’t expected in every case. 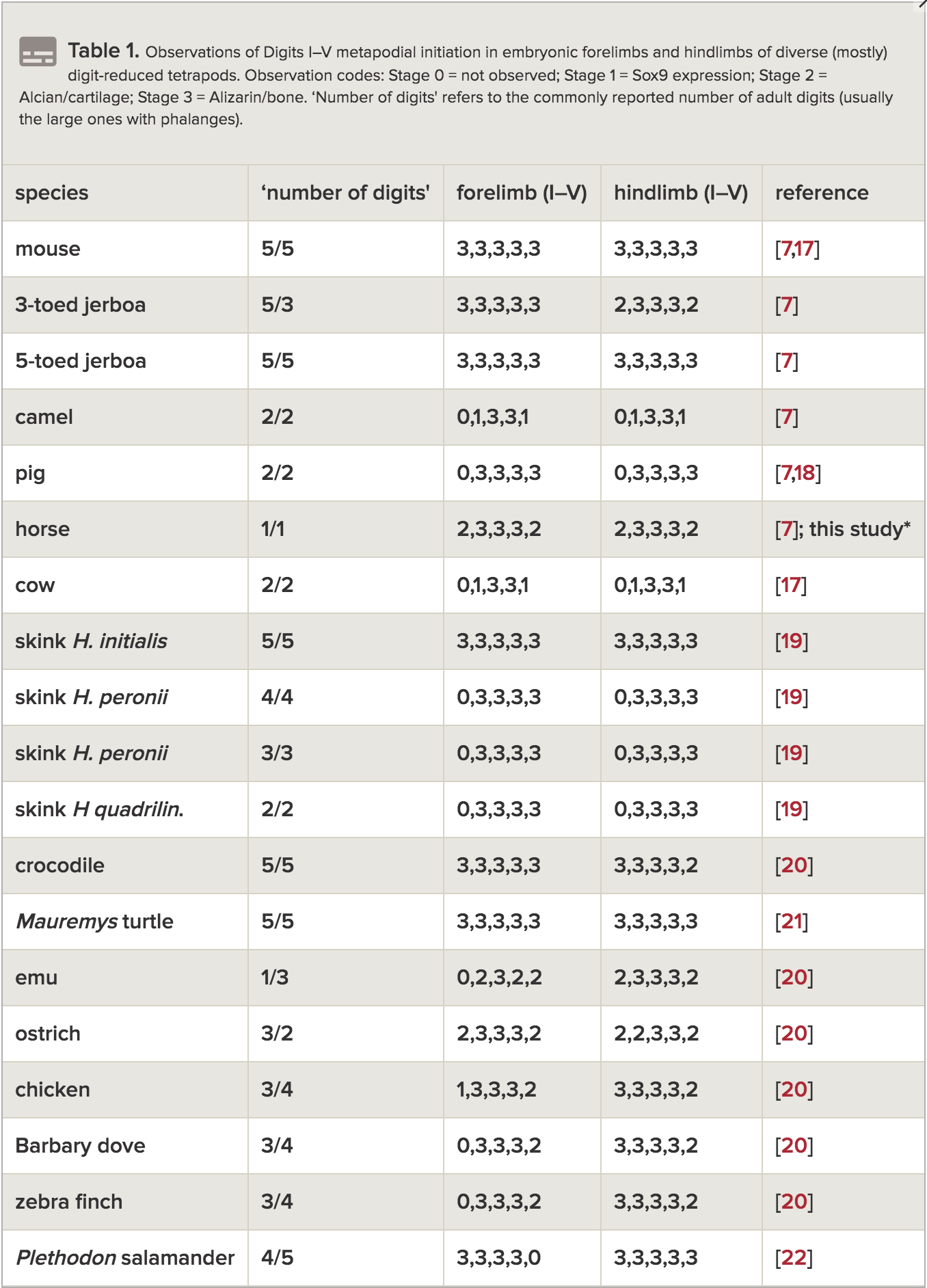