Here’s another philosopher who’s wrecked himself on the shoals of reason and logic when trying to deal with consciousness. Not all philosophers screw up when discussing issues of neuroscience, of course (Patricia Churchland and Dan Dennett are among those who are pretty much on the mark), but so often many of them simply look ridiculous, at least to scientists, when they tell us what could be true and what cannot be true. Today’s article, by a philosopher who maintains that consciousness could not have evolved, is a prime example.

The nescience is on view in an article from iai (The Institute of Art and Ideas) that’s wrong in almost every way that it could be (i.e., it’s “not even wrong”). The author, Bernardo Kastrup, is identified as a “Dutch computer scientist and philosopher who has published fundamental theoretical reflections on the mind matter problem.” Click on the screenshot to read (and weep): 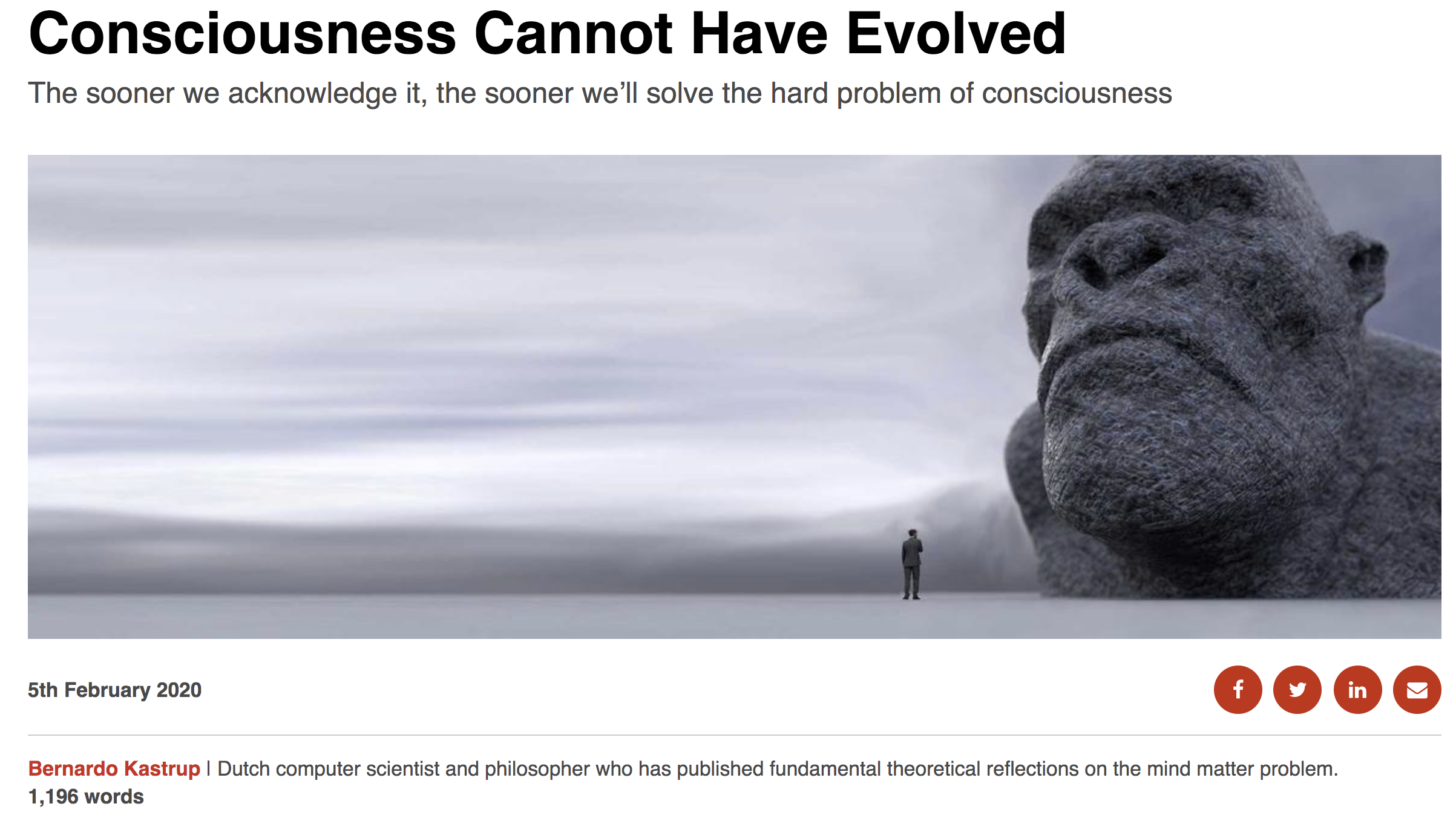 Kastrup’s thesis is that consciousness could not have evolved. His alternative view of why it exists seems to be panpsychism: consciousness was always there as a “fact of nature”. But I’m getting ahead of myself. Here’s Kastrup’s train of logic from the article:

1.) Evolution is a materialistic process.

2.) The salient characteristic of materialism is that all entities “are defined and exhaustively characterized in purely quantitative terms”.

3.) Consciousness cannot be characterized in quantitative terms: it is a qualitative and subjective property manifested by qualia: the sensations that inhere in “consciousness” like (classic example) “what it is like to see red” or “what it feels like to hear a Vivaldi sonata.”

4.) Ergo consciousness is not explainable by materialism.

5.) Materialism must therefore not be a universal explanatory schema for understanding nature; as Kastrup says, “Our very sentience contradicts materialism.”

6.) Because experience or qualia are not “materialistic” phenomena, they “cannot have a function under materialism”. Therefore, “It must make no difference to the survival fitness of an organism whether the data processing taking pace in its brain is accompanied by experience or not.” [JAC: note that natural selection is about reproduction, not survival itself].

7.) Therefore, qualia and consciousness could not have evolved by natural selection.

Let’s take these up one by one, but first let me dispose of contention #7 first. Traits can evolve but need not have evolved by natural selection. They could be byproducts (“spandrels”) of other traits that were selected, like the red color of our blood that’s simply the color of hemoglobin, or they could have been “neutral” traits that came to predominate by random genetic drift (much evolution of DNA sequences is of this sort). Or they could even be detrimental, rising in frequency in small populations despite counterselection (the high frequency of genetic diseases in small populations is likely due to this).  Many scientists think, for instance, that consciousness may not have been selected for directly, but is simply an epiphenomenon—a byproduct that appears when neurological complexity reaches a certain level. Our ability to play chess or do advanced mathematics, for example, are epiphenomena of this type, for they certainly weren’t objects of selection. They were things that became possible when our brains got sufficiently large and complex.

So the first error we find is that Kastrup conflates evolution with natural selection.

And if consciousness is either a spandrel, a byproduct of neutral evolution, or the direct object of selection, it is still a property of our brains, for there are many experiments and studies showing that consciousness can be affected or removed or altered by manipulating our brains. If this be true, then consciousness must have evolved one way or another, even if not by selection. But Kastrup thinks that not only is materialism untrue when it comes to consciousness, but also that consciousness is not a property of a sufficiently complex brain, or even of organic matter; rather it is a property of all of nature. While he’s not explicit, he seems to be adhering to panpsychism, the view that all matter—even electrons—have a rudimentary form of consciousness that in some unexplained way becomes a “higher” form of consciousness when enough matter piles on top of each other. Panpsychists think that rocks, dirt, and stars are conscious in some way. They’re nuts.

Back to the contentions, taken in the order above:

1.) Yep, evolution is a materialistic process, though I prefer the word “naturalistic” because “material” implies “stuff”, and lots of nature, like gravity, isn’t “stuff.”

2.) Kastrup is dead wrong that materialism requires all entities to be measurable. Here’s a question: do you have a liver? The answer is based not on measurement, but on observation. I have never heard a definition of “materialism” that requires quantitative measurement, but that’s Kastrup’s definition and it seems to be one he’s confected to rule out consciousness as a material phenomenon, or the result of a material phenomenon. Unfortunately, he rules out a lot of material phenomena that can’t be quantified as well, like “love”. (I’ll let readers quibble about that one.)

Here, for instance is the definition of “physicalism” (which is said to be the same as “materialism”) from authoritative Stanford Encyclopedia of Philosophy (my emphasis):

Physicalism is the thesis that everything is physical, or as contemporary philosophers sometimes put it, that everything supervenes on the physical. The thesis is usually intended as a metaphysical thesis, parallel to the thesis attributed to the ancient Greek philosopher Thales, that everything is water, or the idealism of the 18th Century philosopher Berkeley, that everything is mental. The general idea is that the nature of the actual world (i.e. the universe and everything in it) conforms to a certain condition, the condition of being physical. Of course, physicalists don’t deny that the world might contain many items that at first glance don’t seem physical — items of a biological, or psychological, or moral, or social nature. But they insist nevertheless that at the end of the day such items are either physical or supervene on the physical.

That seems pretty accurate, especially with “supervene on the physical” at the end (for that is what consciousness is), and it says nothing about quantitative characterization.

Kastrup’s definition of “materialism” is bogus.

3.) It’s not just human consciousness that is the “hard problem” because we find it difficult to characterize. Any sensation in animals, be they bacteria or humans, involves some sort of qualia. For example, what does it “feel like” to the crustacean Daphnia to detect a predatory fish in its pond? We know that Daphnia can detect fish, and some species respond by growing spines to deter predators. And we may even work out the entire pathway of detection and developmental response. But we might be able to do that for consciousness in humans as well! As Patricia Churchland has pointed out, once we work out the pathway that leads to a particular sensation that we can detect (and granted, detection is hard—but not impossible—with human consciousness), then the Hard Problem goes away. We have understood consciousness and qualia, and no further effort is required (see here). As Churchland wrote:

. . .the philosopher may go on to conclude that no science can ever really explain qualia because it cannot demonstrate what it is like to see blue if you have never seen blue; consciousness is forever beyond the reach of scientific understanding.

What is the merit in this objection? It is lacking merit, for if you look closely, you will find that it rests on a misunderstanding. The argument presumes that if a conscious phenomenon, say smelling mint, were genuinely explained by a scientific theory, then a person who understood that theory should be caused to have that experience; e.g., should be caused to smell mint. Surely, however, the expectation is unwarranted. Why should anyone expect that understanding the theory must result in the production of the phenomenon the theory addresses? Consider an analogy. If a student really understands the nature of pregnancy by learning all there is to know about the causal nature of pregnancy, no one would expect the student to become pregnant thereby. If a student learns and really understands Newton’s laws, we should not expect the student, like Newton’s fabled apple, to thereby fall down.  To smell mint, a certain range of neuronal activities have to obtain, particularly, let us assume, in olfactory cortex. Understanding that the olfactory cortex must be activated in manner will not itself activate the olfactory cortex in manner. We are asking too much of a neuroscientific theory if we ask it not only to explain and predict, but also to cause its target phenomenon, namely the smell of mint, simply by virtue of understanding the theory.

4.) Ergo, it’s way premature to say that consciousness can’t be explained by materialism (see Churchland here as well). We already have lots of evidence that consciousness and qualia are in fact phenomena requiring a materialistic brain, and that manipulating that brain can change or efface consciousness. Science is making progress on the problem, and those like Kastrup who assert that this or that problem can never be explained by science are showing their ignorance of the history of science.

5.) I’ve already addressed the claim that materialism can’t explain sentience. That is a “panpsychism of the gaps” argument.

I can in fact think of ways that subjective sensation could be adaptive and increase reproduction, thereby being favored by selection. The feeling of pleasure that comes with orgasm, for example, is a qualium (is that the singular of qualia?). And that pleasure is what drives many people to copulate, so people able to experience that subjective sensation would copulate more often and leave more offspring. If you were able to experience pain, and it hurt, then you might be selected to avoid situations that could damage you and diminish your reproduction. There are many ways one could think of that the experience of qualia, which is consciousness, could be the target of natural selection.

7.) I’ve already refuted this contention as well. Consciousness shows every sign of being a property that supervenes on our brain, and if that’s the case, it evolved. It need not have evolved by direct natural selection—something Kastrup doesn’t seem to have grasped. In contrast to the evidence from neuroscience, Kastrup’s own theory, that nature has consciousness as an innate property, which seems to be a form of panpsychism, has no evidence supporting it. Nor, as some panpsychists say, can there be any evidence, which makes panpsychism like string theory: a hypothesis that can’t be tested—at least in any way we know now.

There is a ton more evidence for the material origin of consciousness than there is for Kastrup’s foolish contention that consciousness “can only have been there from the beginning as an intrinsic, irreducible fact of nature.” There is, as I said, not an iota of evidence for that claim.

Katrup’s piece is weak, poorly argued, and rests on a logical chain whose center (and edges) cannot hold. The sad part is that it may appeal to those who haven’t read the philosophical arguments against his position, and are also unaware of the data from neuroscience showing that qualia and consciousness are intimately connected with the brain—that they supervene on the physical.

Another philosopher embarrasses himself in public, and you don’t have to be a professional philosopher to see through his arguments.

h/t: Several readers sent me this article, so thanks to you all.

200 thoughts on “Muddled philosopher: Consciousness could not have evolved”