Here’s a story published in both the State Journal of Frankfort, Kentucky (click on screenshot below) and Fox News. Note the headline: “Psychics were right. . ” 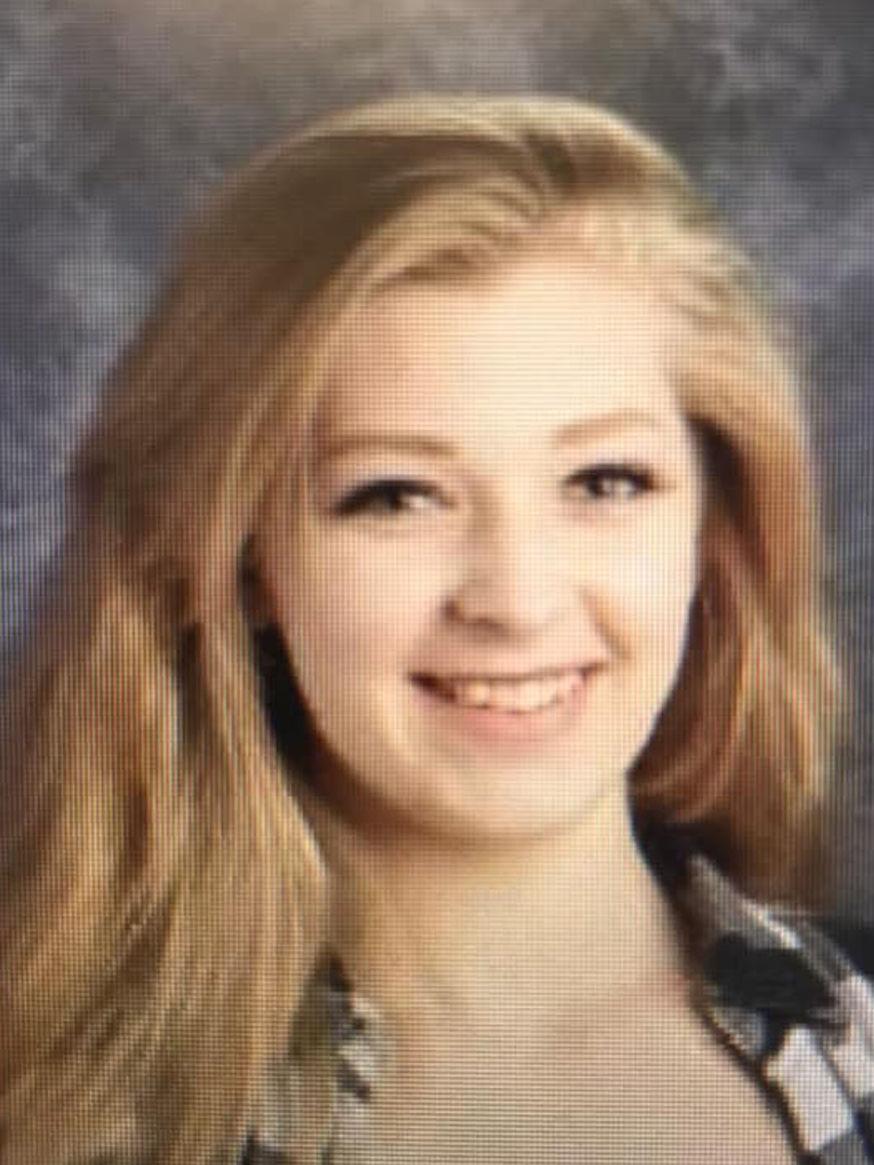 The story: Haylee Marie Martin, a 17-year-old, went missing on January 12 and her absence was reported to the police the next day. Baffled, the sheriff consulted psychics who predicted (sort of) where she would be found. In fact, she was found in the next county along with a 21-year-old woman when both were trying to break into the house of the woman’s boyfriend’s.  The police took them into custody on Friday. The pair won’t face charges, but the police may charge several adults who, they said, hid the girl for two weeks.

Now what about those psychics?

From the State Journal:

The sheriff said at 6 p.m. Thursday he joined a group of psychics from the Richmond area gathered at the Salyers Lane residence where Haylee was last seen on Jan. 12 or 13. Although he was admittedly skeptical at first, Quire said he “did not want to leave any stone unturned.”

“It’s hard to believe, but most (of the psychics) agreed that we would find Haylee in a neighboring county by morning,” he said. “And we did.”

Fox news gave the same report. (I wonder if they paid these psychics. If that’s the case, taxpayer money is funding woo.) Note that most of the psychics reported that she would be found in a neighboring county (correct) the day after the consultation.  Some of them apparently had other predictions, and were wrong.

This kind of reporting, of course, doesn’t mention the disparity of predictions, but it (and the headlines) serve to validate the widespread American view that psychics are accurate. But most missing people turn up nearby, so that’s not a stretch, and, most important, there’s no control here: how often are psychics consulted who turn out to be wrong? I can’t be arsed to do a comprehensive search given the palpable falsity of the idea that psychics are accurate, but a quick Google showed four cases in which psychics were brought into crime cases and gave wrong predictions.  These are “controls”, but of course a proper control would be to compare the accuracy of psychics in such cases compared with non-psychics who have comparable knowledge of the crime as conveyed by the police. I know of no such studies.

That doesn’t mean, of course, that we should remain agnostic about psychics, granting them the possibility that they could be right, for they make guesses in other situations as well, and those guesses are wrong. James Randi’s “One Million Dollar Paranormal Challenge” was explicitly designed to test psychic abilities, but nobody has ever performed successfully (Randi is a magician well equipped to suss out tricks). You can read about a failure in 2009 here. Further, there’s no known physical mechanism whereby psychic abilities could be manifested. Now that doesn’t settle the case, as there may be unknown mechanisms. But physicist Sean Carroll has also written about how parapsychological phenomena are inconsistent with the laws of physics.

Still, Americans continue to be credulous. According to The Conversation, “there are still many people who firmly believe in the power of psychic ability. According to a US Gallup survey, for example, more than one-quarter of people believe humans have psychic abilities – such as telepathy and clairvoyance.” That study, done in 2005, also reports that nearly three-quarters of Americans believe in some paranormal phenomena. 73% of them, for example, subscribed to at least one of these claims: 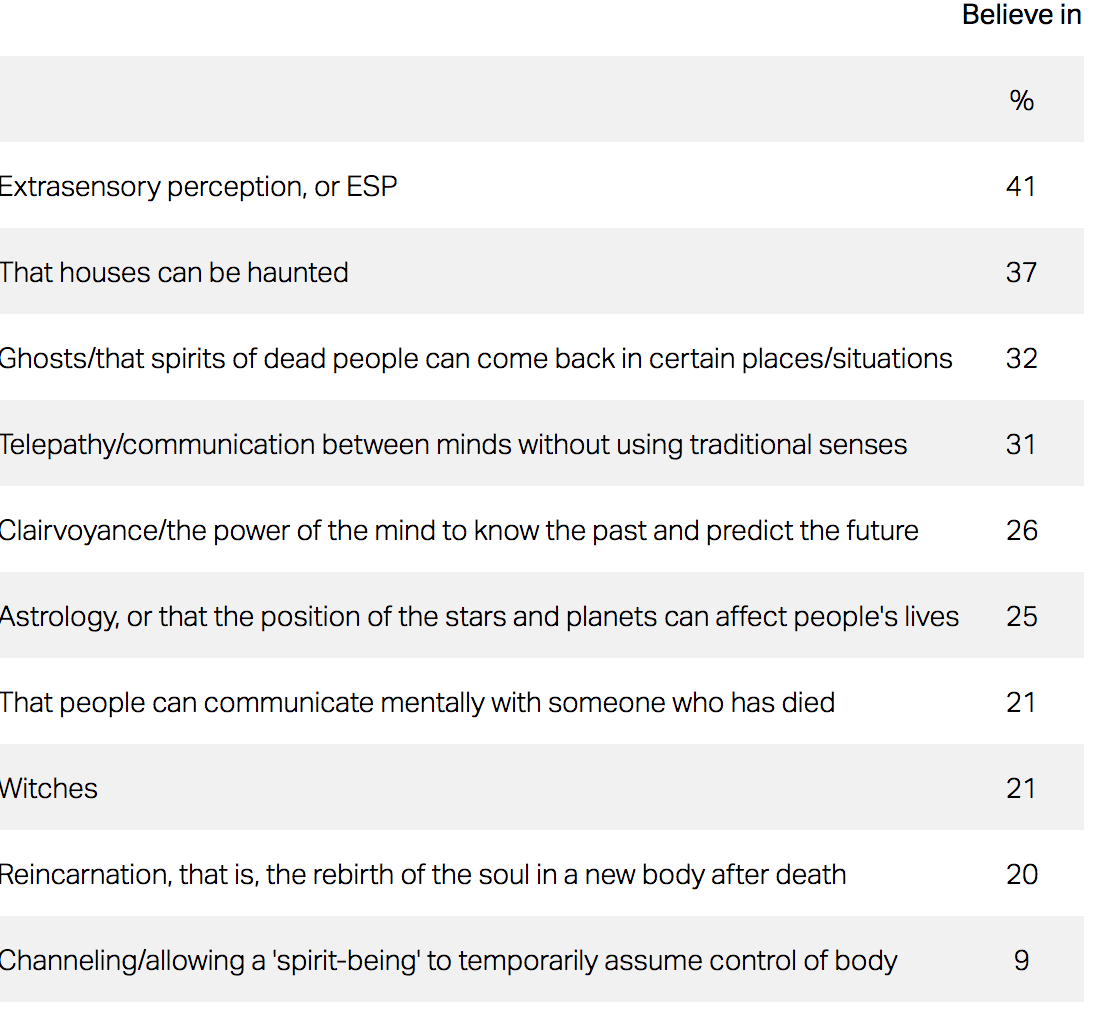 To me this is a remarkable (and distressing) result, especially since scientific tests of some of these claims have never turned up any support. (See here, for example, on astrology.) But of course the same motivation behind many people’s belief in religion—faith that provides comfort, also lies behind belief in psychics. And one can’t argue that these people are harmless, because many of them take lots of money from their gullible clients. (In the clip below, John Oliver calls it a “2.2-billion-dollar industry”.)

There’s no need to further belabor the scams perpetrated by psychics, as many skeptics and their websites have debunked these claims. Let’s just watch a 21-minute clip in which John Oliver takes a few psychics apart with his characteristic wit. There are some good clips here of psychics “in action” (or rather, in inaction).  See the one starting at 16:05 for a particularly egregious case.