I weep for the people of Iran. They’re not nearly as religious as their theocratic rulers, they used to be much more “modern” and secular before the Revolution, and, after surviving a brutal war with Iraq, are now demonstrating both for and against the government, with supplies low, gas prices high, and an oppressive religious regime controlling their every move. If you’re a woman and take off your hijab, you’re bound for jail, often for many years, assuming you survive there.  Homosexuality is a capital crime. It’s awful.

It’s no surprise, then, that this happened. According to many sources, Kimia Alizadeh, the only woman Olympic medalist in Iranian history (she won a bronze in taekwondo, and is just 21) has defected to the West. And, as she announced, it’s because she was oppressed and controlled. Here’s the New York Times story:

The only female athlete to win an Olympic medal for Iran announced this weekend that she had defected from the nation because of “hypocrisy, lies, injustice and flattery” and said she had been used as a “tool.”

The Olympian, Kimia Alizadeh, 21, announced her decision in an Instagram post accompanied by a photo from the 2016 Summer Games in Rio de Janeiro, where she won a bronze medal in taekwondo.

“They took me wherever they wanted,” she wrote. “Whatever they said, I wore. Every sentence they ordered, I repeated.” 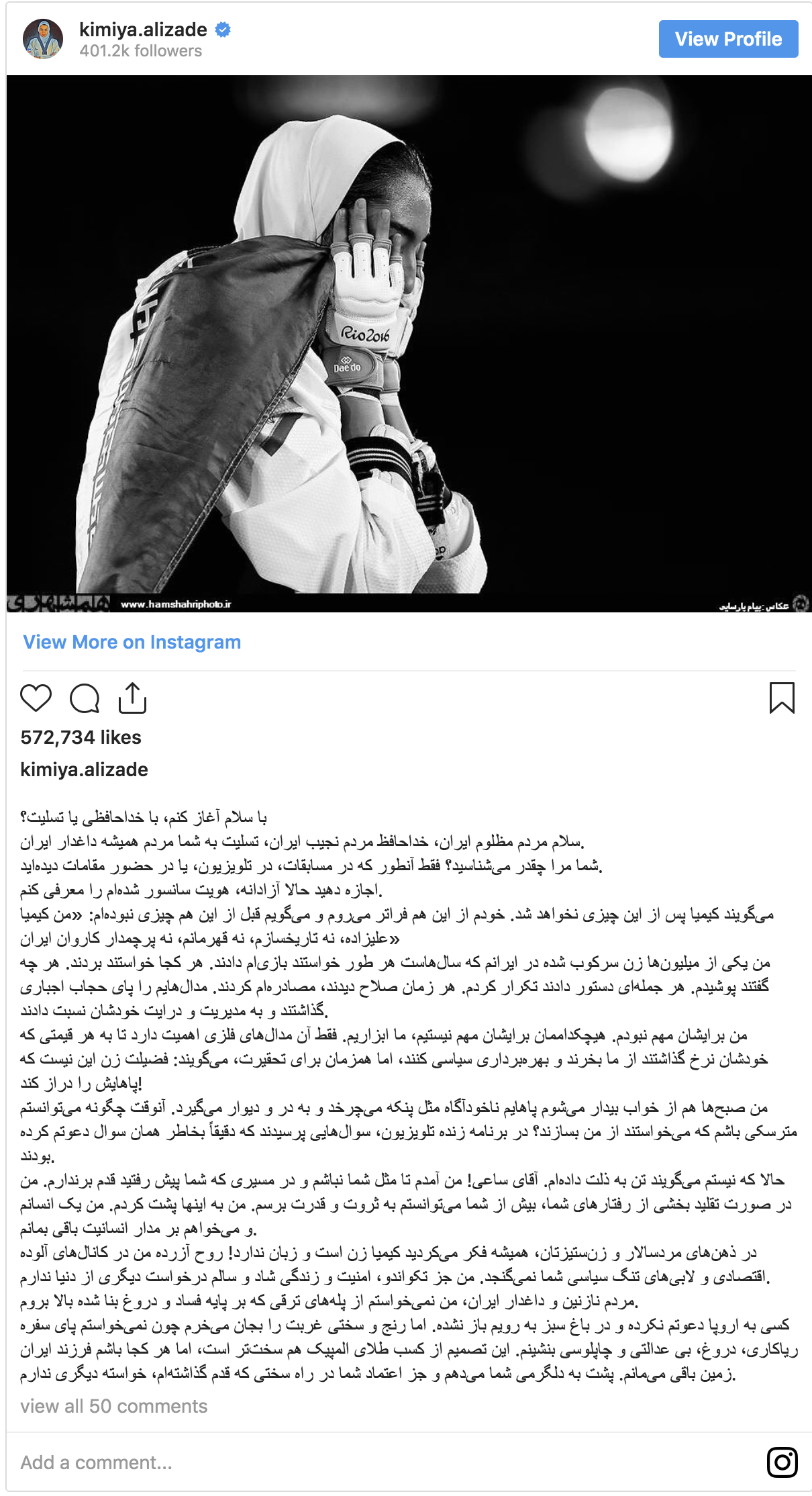 After a long hunt, I finally found a translation on The Daily Wire done by four Iranians.  It’s a pretty powerful statement:

Allow me to now freely and without censorship introduce myself.  They will say after this I will amount to nothing. I myself believe that even before this I was nothing. I am Kimia Alizadeh; I am not a historian nor a champion nor a flag-bearing representative of Iran. I am one of millions of oppressed Iranian women who has been a pawn of the regime for years.

They have taken me wherever they have wanted. They dictated the way I should dress and every sentence that they asked me to say, I repeated. At any time they wanted, they paraded me around. They even sacrificed my medals and victories for their oppressive dress code and hijab. I was not important to them. None of us were. We were just tools.

They only cared about our medals. They were only as valuable as the political leverage that they could offer. At the same time, they tell you “a woman should not stretch her legs.” Every morning I wake up my legs are unknowingly spinning like a fan and they expect not to be the flexible athlete that I am? In a live television interview they invited me to specifically ask me about this.

Now they I have left l, they say I sold out. “Mr. Saee, I have left so that I don’t become like all of you. And that I do not take even one further step in the direction that you have taken. If I had, I would have become much more successful much sooner.”

I turned my back because I am a human and I want to stay a human. In your male dominated and female oppressing minds you always thought ‘Kimia is a woman and will not speak.’ My tortured soul will no longer serve your filthy political endeavors nor your dirty economic dealings.

Other than Tae-kwon-do, the only thing i want is a happy and healthy life. To the kind and oppressed people of Iran: I did not want to climb to a pedestal whose steps are paved with lies and deceit and no one from Europe has invited me and no one has offered me anything, but I am willing to bear the difficulty of living in exile because I could no longer stay at a table where dishonesty, con-artistry and injustice were being served. Making this decision was more difficult than earning the Olympic gold medal, But please know that wherever I am I will forever remain a child of my native country. I will count on you and my only wish is to have the support of my people.

It’s not clear where Alizadeh is right now, but she seems to be in the Netherlands, as there is a photo of her and her fiancé in that country standing by a flower-laden memorial to those who died on the Ukrainian flight shot down by Iran (you can see a Twitter thread here). And in the photo (below), she’s not wearing a hijab:

Ms. Alizadeh’s announcement came four months after Saeid Mollaei, one of Iran’s biggest judo stars, defected to Germany. During last year’s judo World Championships, Iranian officials pressured Mr. Mollaei to either withdraw or intentionally lose his semifinal bout, to avoid being matched in the final against an Israeli rival.

Iranian athletes are forbidden to compete against Israelis.

“A lot of our athletes are forced to deal with these matters — and their suffering is growing by the day,” Mr. Mollaei told the German news outlet Deutsche Welle in September. “Many athletes have left their country and left their personal lives there behind to pursue their dreams.”

Ms. Alizadeh said that she had embarked on a “difficult path,” but that she “didn’t want to sit at the table of hypocrisy, lies, injustice and flattery.”

“This decision is even harder than winning the Olympic gold,” Ms. Alizadeh wrote, “but I remain the daughter of Iran wherever I am.”

Here’s a video of Alizadeh in action: