UPDATE: In the first comment on my thread below, reader Coel calls our attention to a year-old critique of panpsychism by physicist Sabine Hossenfelder, “Electrons don’t think.” It makes some physics-related criticisms of panpsychism that I could not have made, but also adds a nice comment, a response to the claim (made by Goff among others) that the spin, charge velocity, and other properties of particles are part of their “consciousness”.

Your response reveals that you haven’t understood the view you’re attacking, at least if you’re aiming to target the form of panpsychism that is currently taken seriously in academic philosophy (what article was this in response to?). The claim is (A) that physics doesn’t tell us what physical properties are; it merely provides mathematical models that predict their behaviour, and (B) those very properties that physics characterises behaviouristically are, in their intrinsic nature, forms of consciousness.

Part of her response:

You are evading to address my point. If you rename “spin” into “consciousness” you still have the standard model of particle physics and no panpsychism.

“those very properties that physics characterises behaviouristically are, in their intrinsic nature, forms of consciousness”

I like the way Sabine gets in there and battles with the more nescient readers. There are 715 comments!

If you’re sick of panpsychism by now, you can skip this post and the podcast below. But it’s not going away soon, I think, given the vociferous nature and arrant careerism of its proponents. And so it’s incumbent upon us to understand this idea. I’ve listened to the podcast to once again try to understand what it means to say that components of the Universe, like atoms or rocks, are “conscious”.

So here’s a new 48-minute (ends at 44:37) broadcast show that just appeared on BBC Radio 3 (click on screenshot below to hear it). It features three guests (all philosophers) publicizing the resurgent but deeply misguided views of panpsychism: that everything in the Universe has some form of consciousness or some essential component of consciousness, and thus humans are conscious because our brains are cobbled together from semi-conscious atoms and molecules. But there’s also one detractor/skeptic, who happens to be a neuroscientist. Moderator Matthew Sweet, I must say, does a terrific job, asking all the right questions.

I’ll soon stop posting about this, but I wanted readers to see how deeply wrong an idea can be (maybe “woo-ish and untestable” is a better characterization than “wrong”) and still be popular. I am still baffled by its popularity, though nobody I respect has adhered to this idea.

Here is the Beeb’s description of the show; I’ve provided links to the participants.

Panpsychism is the view that all matter is conscious. It’s a view that’s gaining ground in contemporary philosophy, with proponents arguing that it can solve age-old problems about the relationship between mind and body, and also fill in gaps in other areas of our understanding of nature. But is it true? And if it is, how could it change our understanding of ourselves?

The gist of the theory is really found in the first 30 minutes, when Goff tries to explain how stuff like atoms and rocks are “conscious”. It turns out that he doesn’t think they’re conscious in the same way that we are, but that atoms and rocks do have a rudimentary form of consciousness that pervades the whole Universe:

Goff: “The fundamental constituents of physical reality, perhaps electrons and quarks, have almost unimaginably simple forms of experience, and the very complex experience of the human or animal brain is somehow derived from the very simple experience of their most basic parts.”

Well, this fails on two counts. First, he doesn’t say what it actually means for an electron to have “experience”. Sure, they have spin and move around, but in what sense is that “experience” if they don’t “experience” it? What he’s saying is more or less what he told Sean Carroll on the podcast I posted yesterday: all matter has “properties,” like mass and spin and velocity, and if you call those properties “consciousness,” then yes, everything is conscious. But then he’s made no advance beyond pure physics.

And this doesn’t solve the second problem: how do the rudimentary consciousnesses of the molecular bits of our brain somehow come together to produce full consciousness in the whole organ: consciousness in which we have qualia—feelings, perceptions, and sensations? This remains a mystery that neither Goff nor Morch appear to solve.

Morch agrees with Goff, saying that tables and chairs aren’t conscious but have conscious constituents, but human brains have conscious constituents that can combine to give us consciousness. This is pure sleight of hand, because this doesn’t answer the Hard Problem of Panpsychism: How do the semisconscious bits of brain stuff combine to make a brain conscious, but the semiconscious bits of tables and rocks don’t? These philosophers don’t tell us, and so there’s a gaping hole in their “theory”—if you want to call an untestable and largely semantic issue a “theory”.

And Goff bangs on, as he did in Sean Carroll’s podcast, that physics cannot tell us what matter really is—all it does is tell us how matter behaves. That, say Goff and Morch, doesn’t tell us what we want to know. As Goff says, “Physics leaves us in the dark about the intrinsic nature of matter–what matter is, in and of itself. . . Panpsychism puts consciousness in that hole.”  This is Panpsychism of the Gaps!

And it sounds to me like more bullshit. Does saying that matter has “experience” now finally tell us about the intrinsic nature of matter? (Never mind that there’s no evidence for the “experiential” part of matter save that it behaves—which is what physics already tells us.) Goff finally pronounces that panpsychism has given us an attractive answer to the “hard problem” of consciousness: how does the brain’s workings produce sensations?

Goff: “The idea is that there’s just matter, nothing spiritual or supernatural, but matter can be described from two perspectives: physical science describes it, as it were, from the outside, in terms of its behavior; but matter from the inside, in terms of its intrinsic nature, is constituted of forms of consciousness. It’s a beautiful way to bring together these two stories.”

No, it’s a beautiful way to describe what comes out of the south end of a cow facing north. Panpsychism does not in any way solve the physical basis of conscious experience. It just punts it down to a lower level, and then adds the claim that when enough semi-conscious atoms come together in a brain, voilà, you have full consciousness! It’s magic!

Neuroscientist Glaser, the only voice of reason beside moderator Sweet, pipes in and says that neuroscience doesn’t need saving by panpsychism—not just yet. It’s early days in trying to understand consciousness, he says, and we don’t even have a clue how the brain produces and comprehends language or stores memories. When we figure out those things, he claims, then we can tackle consciousness, and if we fail at that then we can start thinking about stuff like panpsychism (16:46).

Things begin to get boring at this point (Matthew gave up 30 minutes in), but I listened to the bitter end. de Jonge comes in as a “deep ecologist” (a new term to me), saying that panpsychism is congenial to deep ecologists, who believe that humans are nothing special in natural ecosystems (duhh. . .), and this jibes nicely with panpsychism’s claim that our consciousness is nothing qualitatively different from the consciousness of a rock. We’re all part of the whole! In other words, de Jonge likes panpsychism not because there’s any evidence for it, or because it makes sense, but because it makes humans seem part of a greater whole, just like Deep Ecology.

Finally, Goff claims again (34:08) that materialism bequeaths a bleak and depressing worldview, while panpsychism give us a picture of the world that makes us “more comfortable in our own skin”. He admits that it doesn’t make it true, but I, at least, am not much comforted by thinking that my electrons have experiences. In fact, it freaks me out. Fortunately, it isn’t true.

I’m becoming aware that people like Goff and Morch like panpsychism because, they say, it gives philosophers alone the ability to do what scientists can’t: explaining not only the “intrinsic nature of matter” but also the hard problem of consciousness. In other words, these philosophers are claiming the Big Territory in a turf war between neuroscience and philosophy.

I would argue that although philosophers have a valuable role in helping empirical workers figure out how to properly frame a research program for understanding how consciousness arises, philosophers cannot solve the problem by themselves. And Goff and Morch’s philosophy doesn’t even seem to be real philosophy. As one genuine philosopher told me: “it is just a gimmick on the part of those philosophers who are stunningly ignorant of science, especially the biological sciences.”

I will continue to listen and read, though I’ll try to inflict as little of this as I can on readers. But nothing I’ve heard has convinced me that there’s anything to panpsychism but a lot of puffery and empty assertions about the “experience” of rocks and electrons. It fails to define what that “experience” consists of beyond the physical properties and behavior of matter, and it fails big time in explaining how the “experience” of the organic molecules in our brain can come together to produce human consciousness, when it can’t do that for rocks or viruses. Panpsychism is neither a theory nor a philosophy, but a semantic trick performed by piling a few bogus claims atop each other. Why is it popular? You tell me!

Here’s the show (the answer to the title question, of course, is “NO!”). 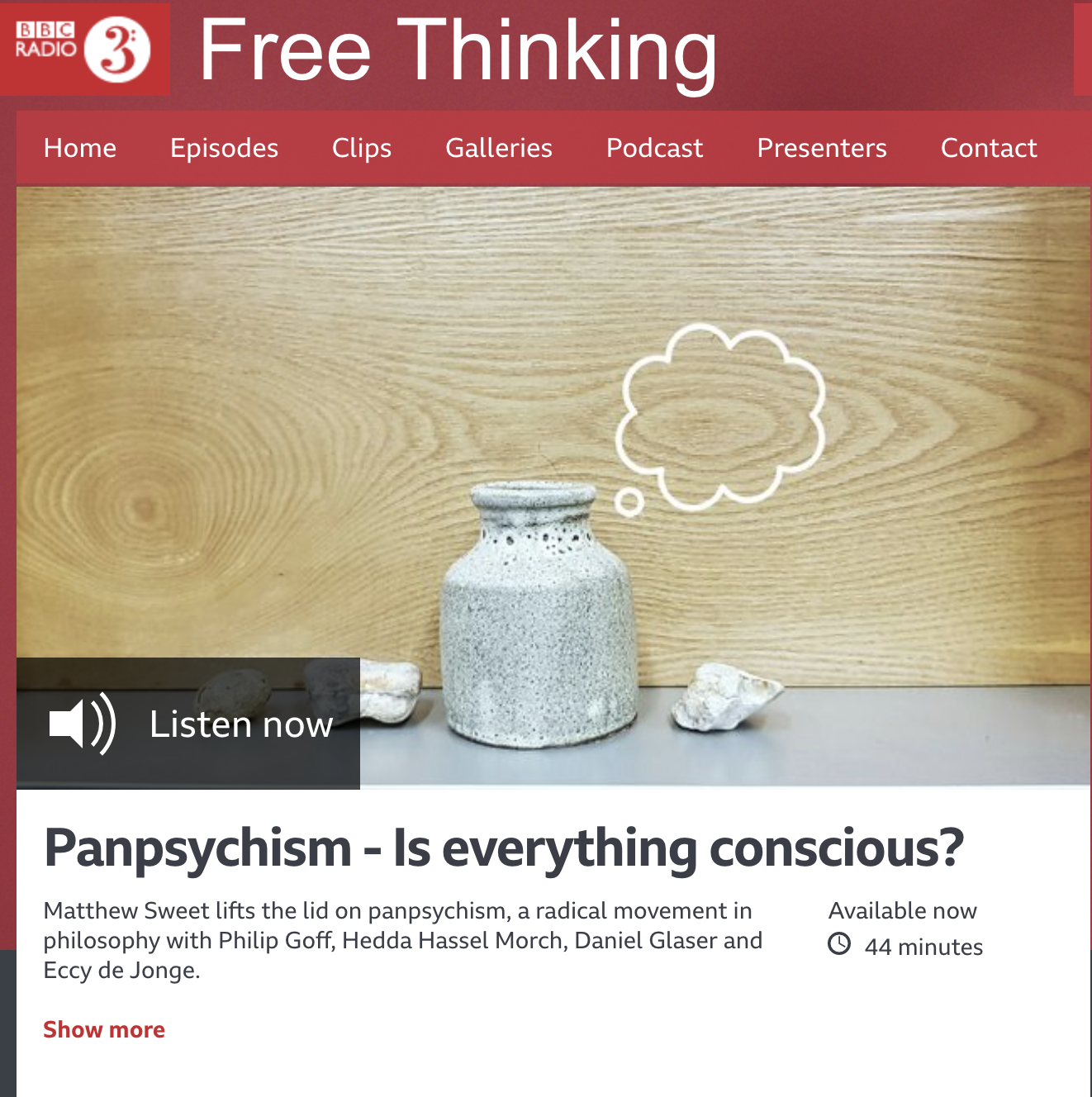 And a relevant cartoon by reader Pliny the in Between’s site, The Far Corner Cafe: 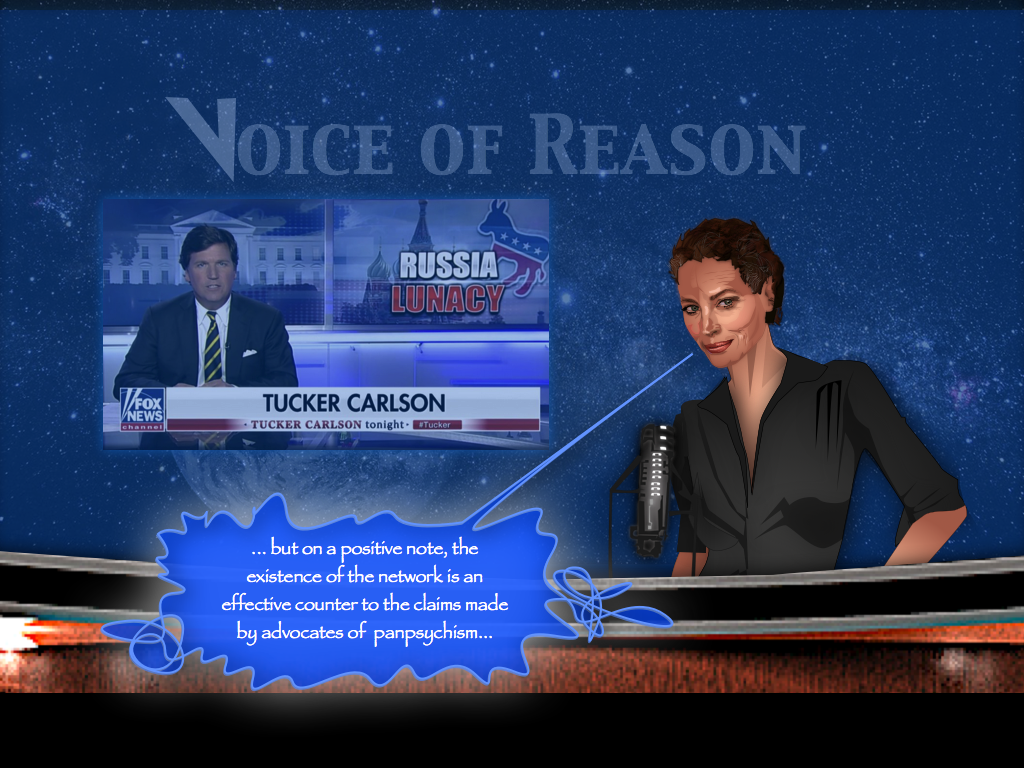