It’s Friday, December 27, 2019: the third day of Christmas (French Hens Day), the fifth full day of Hanukkah, and the third day of Coynezaa. It’s also National Fruitcake Day: the day when everybody circulates the world’s one existing fruitcake to somebody they’ve neglected (and want to punish). It’s also Visit the Zoo Day, though I’m not a big fan of zoos and won’t be going.  In North Korea it’s Constitution Day. Although I had no idea they had a constitution, you can find more information about it here, though I don’t see anything about The Right to Starve or about The Right to Put Three Generations of Relatives in a Labor Camps if One of Them Offends the State.

The weather is now predicted to be above freezing for at least a week: it’s an extraordinarily warm Coynezaa season in Chicago. The high today is predicted to be 44° F (7° C), and yesterday’s high—61° F or 16° C—set an all-time temperature record for December 26 in Chicago, beating the previous record by 6 full degrees Fahrenheit.

Read about the event: a group of non-Quaker citizens of Flushing (now in New York) petitioned governor Peter Stuyvesant to lift the ban on Quaker worship. It was a plea for religious tolerance, and it failed. Stuyvesant dissolved the local government and arrested the leaders. The Flushing Remonstrance articulated freedom of religion but did not create it.

The first is a big happening:

The song, both lyrics and music, were written by the polymathic artist Rabindranath Tagore. Here are a number of famous Indian vocalists singing it. I have to say that it’s a good song—certainly far better than the U.S. National Anthem:

The movie version of Show Boat was filmed nine years after the play, and features this song, here sung by the great Paul Robeson. It’s a remarkably anti-racist song for its era, though the Broadway version of the song had the “n-word” instead of “darkies”. Robeson’s voice is ineffably thrilling:

Jonas was ordained as a rabbi in Germany. Being a woman, she couldn’t find a pulpit, but did religious work until she was sent to the internment camp Theresienstadt by the Nazis in 1942. There she worked in a a rabbinical capacity until 1944, when she was moved to Auschwitz and killed immediately at age 42. Here’s her photo: 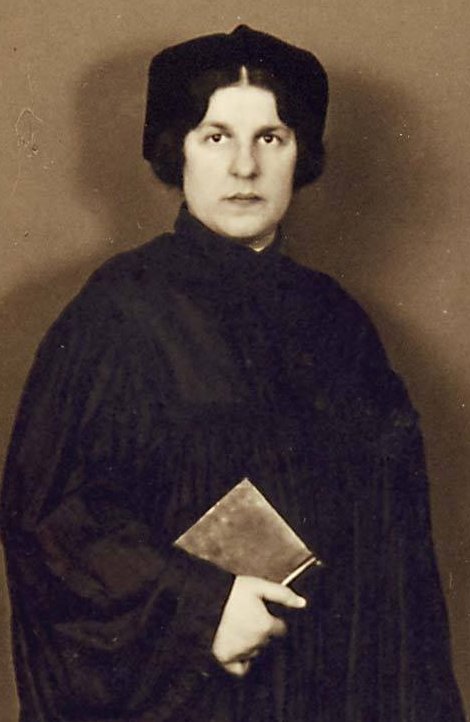 The Cave of Swallows, also called the Cave of the Swallows (Spanish: Sótano de las Golondrinas), is an open air pit cave in the Municipality of Aquismón, San Luis Potosí, Mexico. The elliptical mouth, on a slope of karst, is 49 by 62 m wide and is undercut around all of its perimeter, widening to a room approximately 303 by 135 meters (994 by 442 ft) wide.The floor of the cave is a 333-meter (1092 ft) freefall drop from the lowest side of the opening, with a 370-meter (1,214 ft) drop from the highest side, making it the largest known cave shaft in the world, the second deepest pit in Mexico and perhaps the 11th deepest in the world.

Here’s an Attenborough video segment about the cave that kicked off an episode of BBC’s “Planet Earth” i 2006.

Those who found eternal quietus on December 27 include:

Here’s Beckmann’s “Still Life with Cats” (1917). Beckmann did a fair few renditions of cats that you can see here. 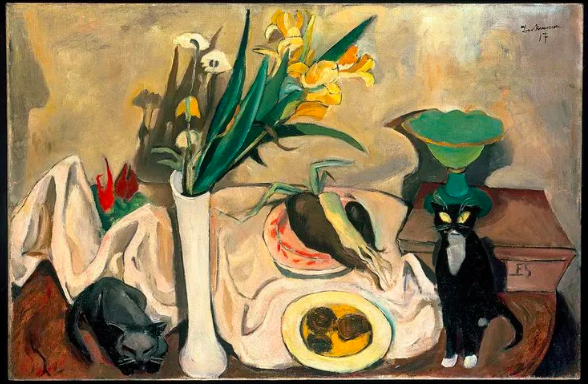 The day after Carrie Fisher died, most likely from drug abuse, her mother, the actress Debbie Reynolds, also died. Wikipedia says this:

The day after Fisher’s death, her mother Debbie Reynolds suffered a stroke at the home of son Todd, where the family was planning Fisher’s burial arrangements. She was taken to Cedars-Sinai Medical Center, where she died later that afternoon.  According to Todd Fisher, Reynolds had said, “I want to be with Carrie” immediately prior to suffering the stroke. On January 5, 2017, a joint private memorial was held for Fisher and Reynolds. Fisher was cremated while her mother was entombed. A portion of her ashes were laid to rest beside Reynolds in a crypt at Forest Lawn Memorial Park in Hollywood Hills. The remainder of those ashes are held in a giant, novelty Prozac pill.

If you don’t believe that last bit, it’s true. Here’s a photo from The Hollywood Reporter of Carrie’s brother Todd carrying her ashes in the giant capsule: 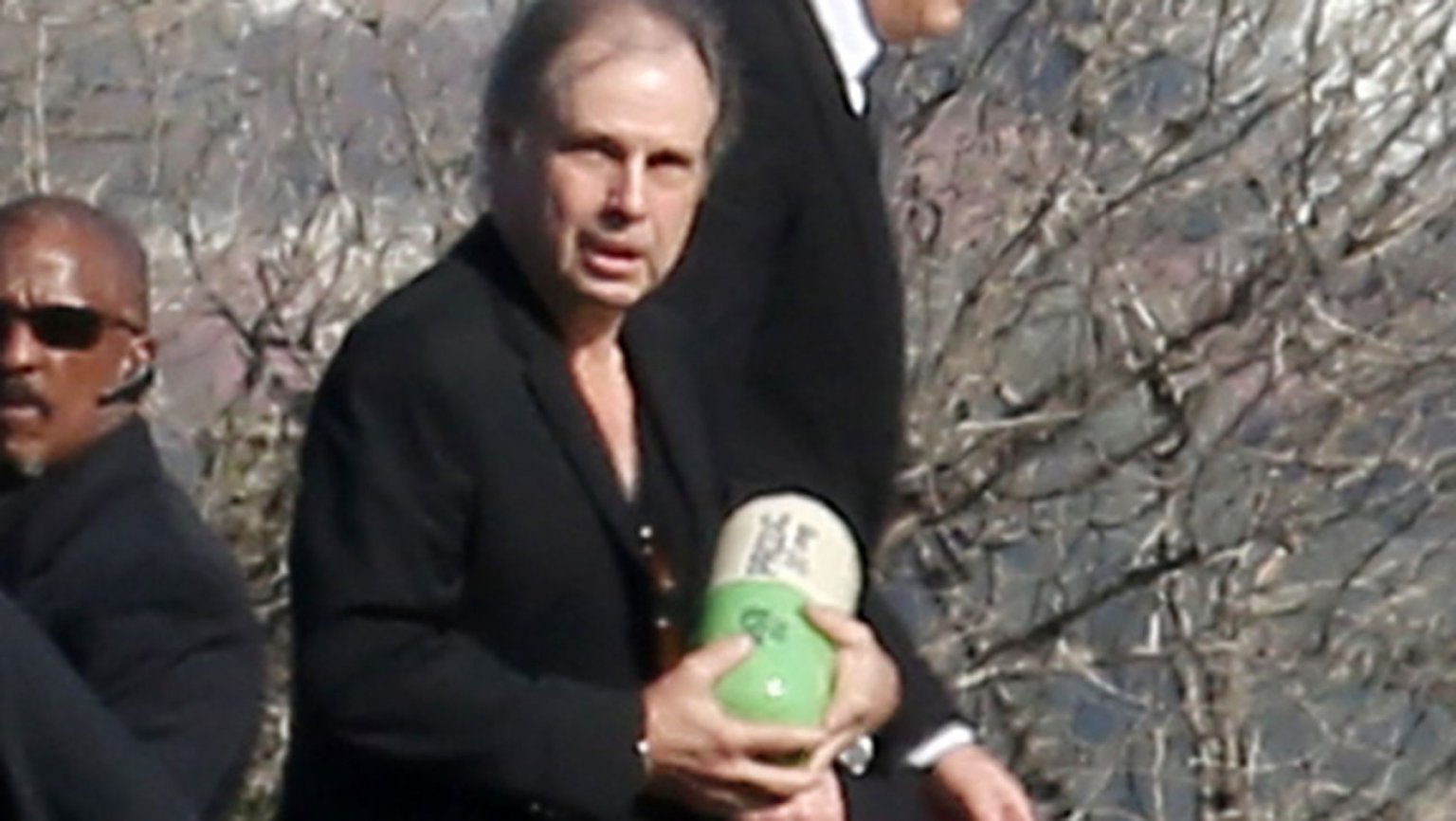 Meanwhile in Dobrzyn, Hili is doing her job, such as it is, as editor of Listy:

Hili: What are you writing about?
A: About productivity.
Hili: Continue; I will just sit here. 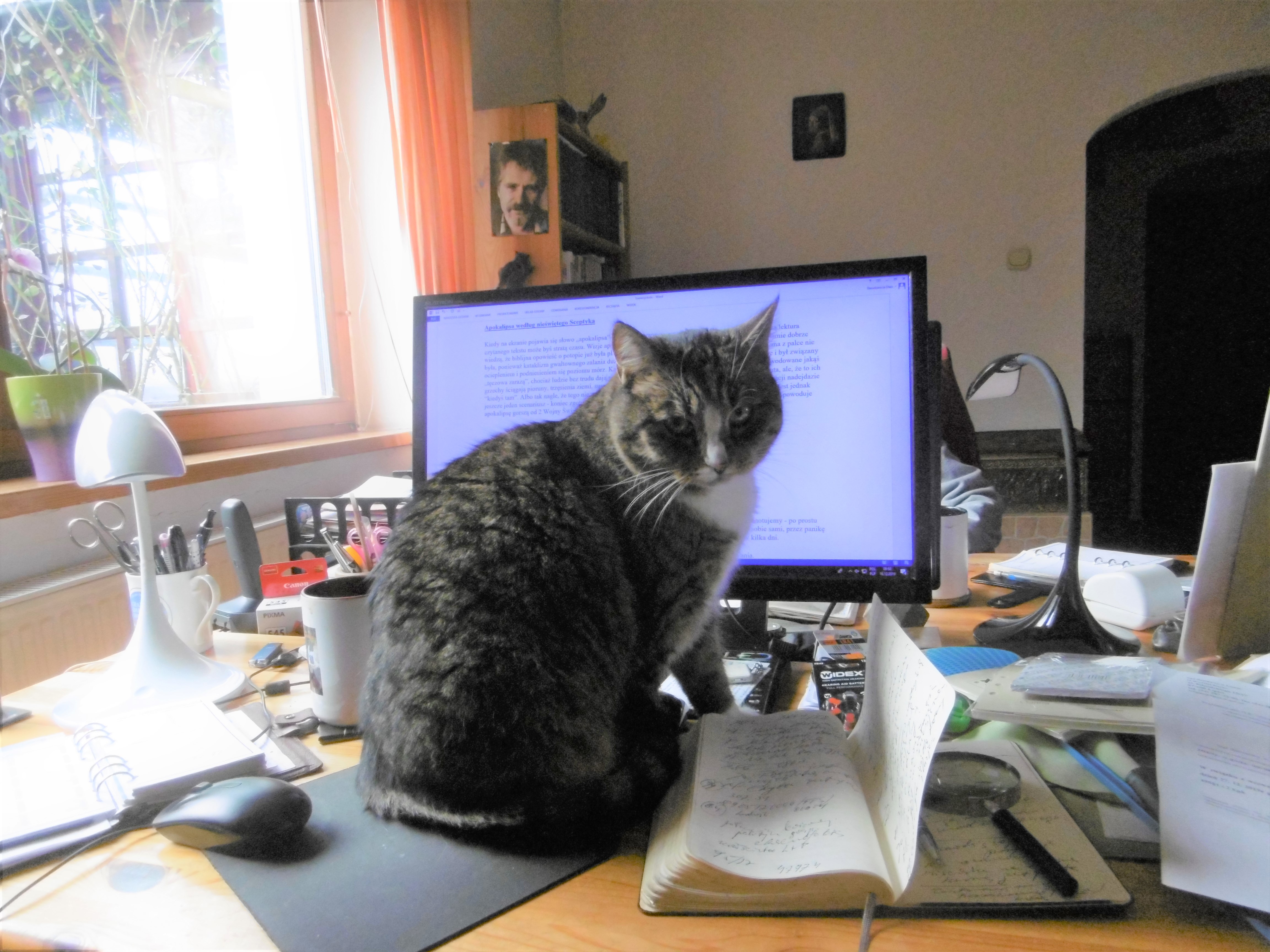 And in nearby Wloclawek, Leon is catting:

My college pal Stash Krod posted this Kliban cartoon on his Facebook page, and it is indeed a real Kliban cartoon. It reminds me of Hitchens’s famous “My own opinion is enough for me” remark: 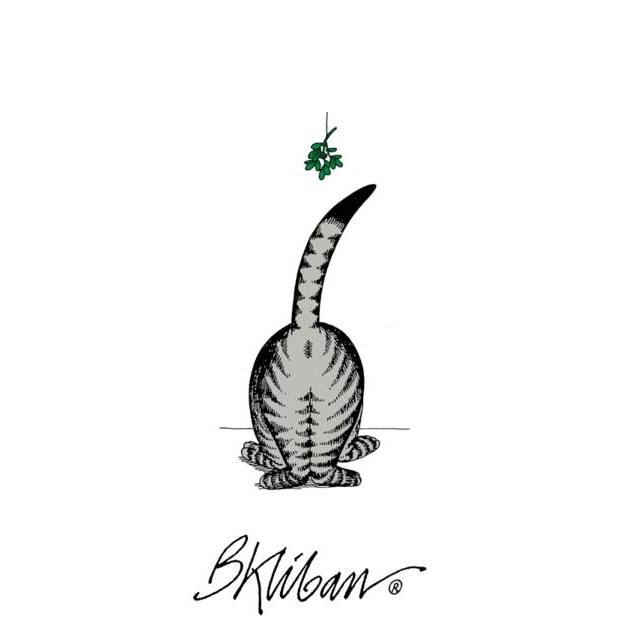 From Jesus of the Day: a problem I always faced as a kid: 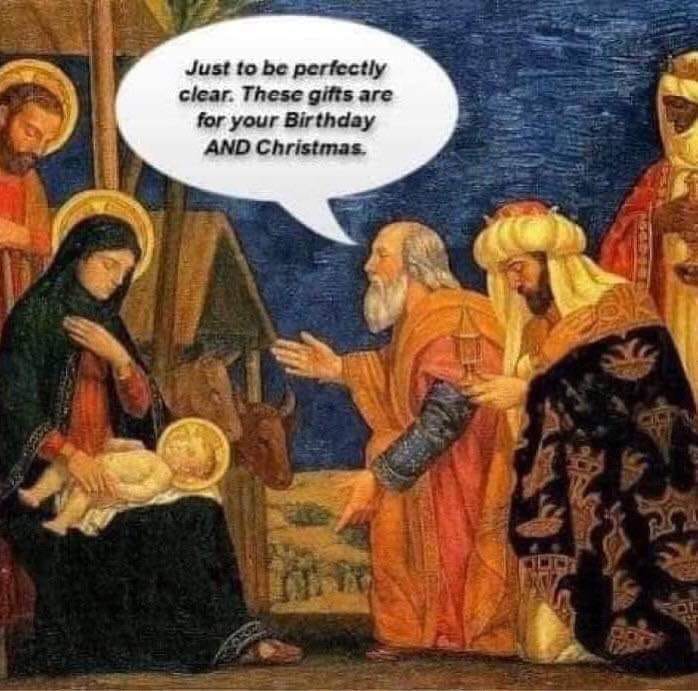 From Cole and Marmalade (I may have posted it before, but it’s a winner): 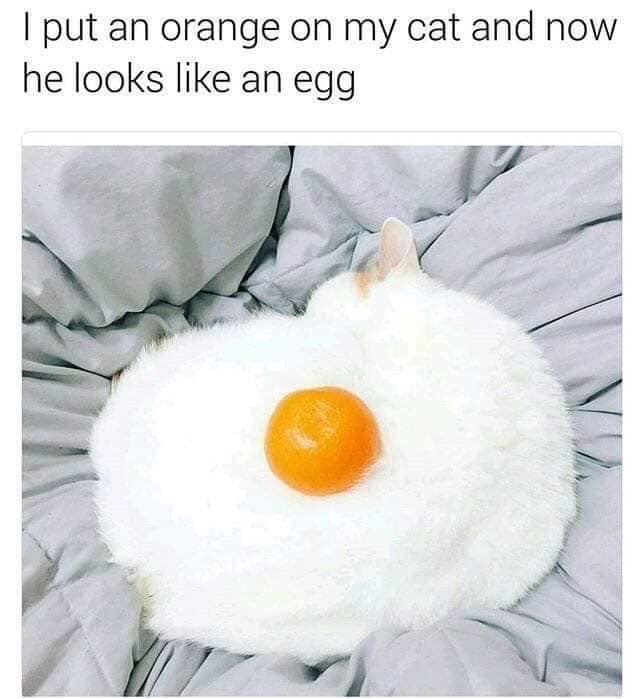 All our tweets today come from Matthew Cobb, mainly because no other regular has sent me any. Fortunately, Matthew has been generous with his “gifting” of tweets.

First, the Friday egress of the fowl from Marsh Farm Barn. Rush hour was slightly delayed because Smudge the Cat wouldn’t get off the door, and also played with the Christmas ornaments:

Friday Rush Hour finally began, with Bumblebee the Sheep coming out first, followed by Lucy the Goat. And, once again, Cuthbert the Goose gets a name check while most of the ducks are ignored.

The appointing of federal judges, which have a lifetime sinecure, is a particularly important job of the U.S. President. Unfortunately, we have a madman and a bull-goose loon conservative as President, and so we have the following. (You probably recall, if you’re an Arican, that Brown v. Board of Education prohibited segregation in the public schools.)

Well, come January 1, recreational marijuana will be legal in Illinois. . .

I wish you all the kind of happiness Toby got when I spilled the catnip pic.twitter.com/5PgHCHvYaX

The picture on the duvet cover below is, of course, from the movie American Beauty. This would make a great Christmas present!

Great to be back at my parents, but still no idea where Mum got this duvet cover from! Feeling sexy though 😜#duvetknowitschristmas @rhodri pic.twitter.com/m7AgMhFZrp

I don’t know what Ms. Vosshall is on about: this is the natural order of things:

Julius the Puppy is so scared of that cat, and the cat takes total advantage of its bossy power: hogging the sun, eating his food, policing what rooms the dog can enter. #HomeForTheHolidays pic.twitter.com/glZeoKqvp7

I love muscovy ducks (they’re not artificially selected mallards, but members of another species). They’re sweet and friendly, and wag their tails constantly.

I can’t remember if I posted this before, but it’s worth seeing again. Only in Paris could a general strike produce something like this (note that it’s Matthew’s own tweet):

Yes, you may not have heard, but France is in the grip of a general strike over pensions, and the ballet dancers of the Opéra have joined in. H/t @resolutereader https://t.co/e02njJCaFf

A lovely pensive cat. According to translate, it is sitting watching its staff in the bath. My cats generally look more alarmed when I am in the bath, but that doesn’t happen very often.

I hasten to add that Matthew doesn’t mean that he doesn’t bathe often; what he means is that he usually showers rather than sitting in the tub. (I take about one bath a year; I don’t see the point of what my father called “sitting in your own schmutz.) And here’s the Google translation:

I’m sorry! Now bathing! That is this sight! I have been taking a bath with me since I was born, so this face on my side during my bathing. I sleep immediately after taking a bath m(_ _)m