Douglas Murray is only 40 years old, but has already established himself as a neoconservative intellectual and author.  Because of his political views—he’s anti-immigration, a critic of Islam, and a supporter of Brexit—he’s despised by many on the British and American Left, although his SJW credibility is marginally increased because he’s also gay.  I haven’t read any of his previous works, but I am reading his latest book: The Madness of Crowds: Gender, Race, and Identity, which was published in mid-September but already has 182 reviews on Amazon and a 4.8-star rating (out of 5). It was hard to get, too, as there are several people who have already requested it at the University of Chicago Library, and I have but a week to read it.

Click on the screenshot to see the book on Amazon: 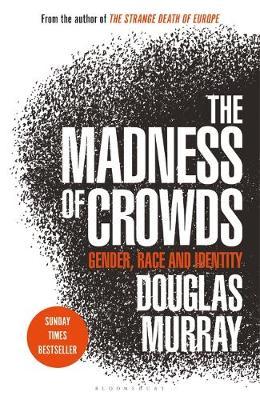 Since the book is a critique of social justice warriorism and the authoritarian Left, I would have expected a lower rating, but perhaps this suggests a political climate in America against the excesses of the Left: a climate you don’t see on Twitter (or at least I don’t).  And, like me, Murray applauds the motivations of SJW-ism but decries its methods. His main plaint is that the “movement” is hypocritical, confused, and self-contradictory, and has many of the hallmarks of a religion: a religion built on the lacuna left when Marxism waned (Murray is an atheist).

I haven’t seen many reviews of the book, though the Guardian, predictably, calls it a “rightwing diatribe”.  And while that review is correct in saying that Murray leans too heavily on anecdotes to support his argument, it also tries to defend the indefensible, to wit:

The acclaimed gender theorist Judith Butler is held up as a malignant fraud who hides behind the complexity of her prose. The entire venture of social science is deemed corrupted by its insidious fixation on oppression. Murray turns to recent hoax articles that were published in the academic journal Cogent Social Sciences (a prank that he describes as “one of the most beautiful things to happen in recent years”) as evidence that social and cultural theory is all a sham.

Well, Butler deserves contempt and ridicule for the opacity of her prose, and she may well be a fraud, though an influential one. (She may well mean what she says, but how can you understand what she says when she writes so dreadfully?) And the Guardian is just wrong about where the hoax articles, written by James Lindsay, Peter Boghossian, and Helen Pluckrose, were published. The first of them, the famous “conceptual penis” article by Lindsay and Boghossian, was published in Cogent Social Science, but then the trio had seven other articles published or accepted after that—all in different journals.

But let’s look at what Murray says about those “grievance studies” articles. We’ve already seen them applauded by Andrew Doyle, the leftist creator of the über-woke Titania McGrath, as “attempts to improve the field” (social sciences). But as we know, academics got really upset when these papers were published or accepted, and they’ve tried to get Boghossian fired for dishonesty.  I interpret this not as an attempt of these people to police their fields, but to defend the dreadful spate of papers in “X studies” journals, papers that I’ve often highlighted on this site. Despite Boghossian, Pluckrose, and Lindsay’s aims, it’s clear that their efforts, while highlighting the dreck that passes for scholarship in many of these fields, won’t succeed in damaging those fields. For the academics inhabiting them are simply too invested in their careers and in their ideologies. What you see in the backlash is simply the anger of multiple rulers whose nakedness has been exposed.

But here’s what Murray says about this on pp. 62-63 of his book (I’ve used a screenshot from Google Books to save time): 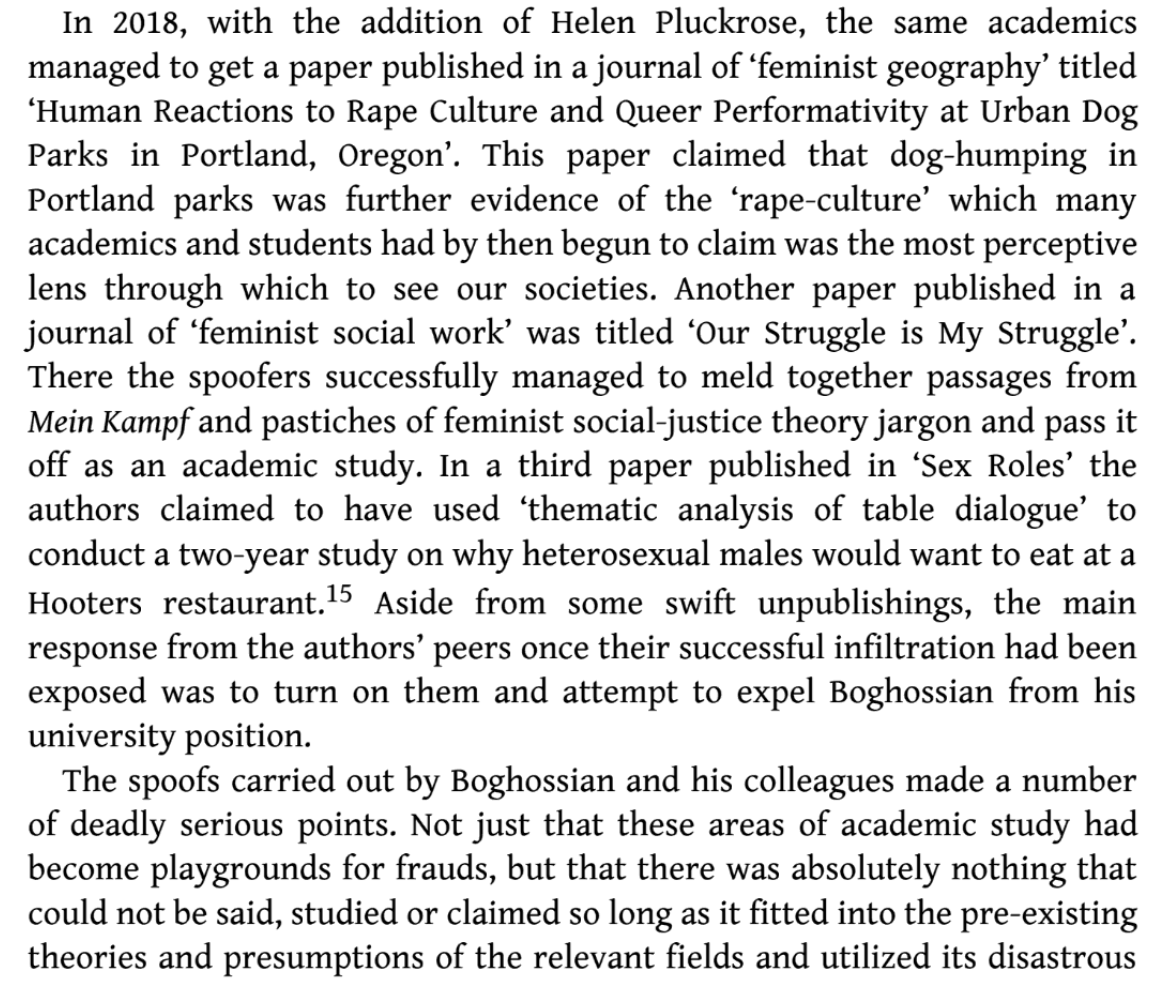 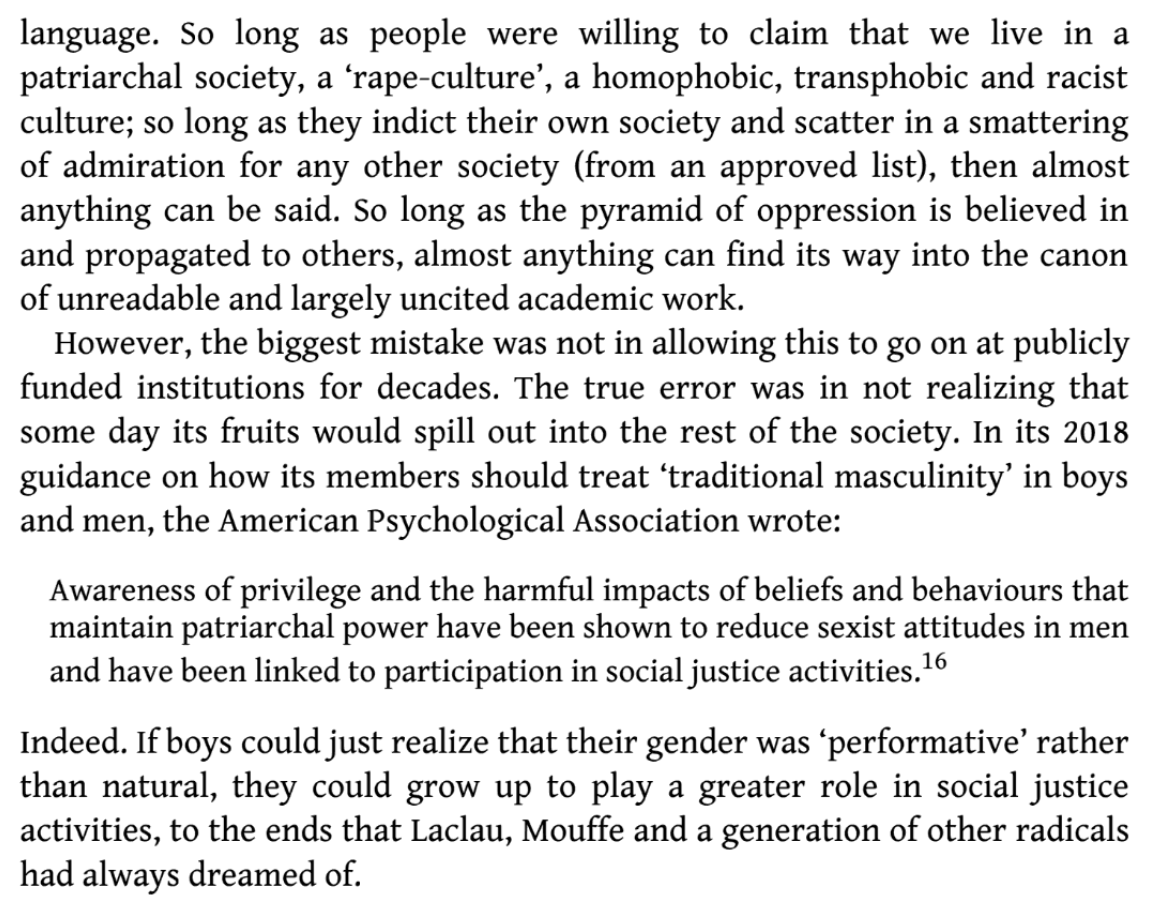 I pretty much agree with that analysis, and although the APA’s discussion of masculinity is but one example, Murray gives others throughout the book showing how SJW-ism has spilled into mainstream culture, including the New York Times. (I was intrigued by Murray’s contention that this kind of stuff doesn’t really qualify as news, but is both virtue-flaunting and intended to be a slap in the face of the reader, implying, “Take that, bigot!”).

Again, it’s not the goals of identity politics and SJW-ism that are bad, for they’re good: they aim to eliminate bigotry and discrimination against gays, minorities, women, and other people who have traditionally been deemed second-class citizens—or not human at all. It’s not the goals, but the tactics, which Murray sees as being likely to backfire. If you accuse men of “toxic masculinity”, he argues, then men will at some point strike back. Ditto for those who indict “whiteness.” Now I’m not sure about these backlashes, but in my view the excesses of identify politics not only endanger the Left’s chance of gaining or holding power, but also attack some of the virtues long held by the Left, like pure egalitarianism and freedom of speech.

I’m only 85 pages into a 256-page book, but already know that I can recommend it to readers, even those who will reject its arguments. For how can you defend identity politics and intersectionality without knowing the best arguments against them? (Murray divides his book into four sections, dealing with gays, women, race, and transsexual people.) And since Murray is gay, I found his take homosexuality quite absorbing.

Finally, the book is extremely well written, a pleasure to read, even when you disagree with its ideas. Murray is no Judith Butler, thank Ceiling Cat.

As I said, I haven’t read anything else that Murray has written save the 85 pages of this book, so save your breath if you’re going to fulminate about other stuff he’s written, or about his politics in general. I am just judging what I’ve read so far.