I once visited Truman State University (it’s in Kirksville, Missouri—Truman’s state) as a guest of Taner Edis, physicist, atheist, and anti-creationist. It was a pleasant visit, and Taner surely couldn’t have played a role in the latest shenanigans at This school, recounted in the article from FIRE (the Foundation for Individual Rights in Education) that you can see by clicking on this screenshot:

Note that Truman State is a public university and thus subject to the strictures of the First Amendment. However, as the article recounts, the school has repeatedly turned down students’ requests to form what seem to be perfectly reasonable clubs and organizations—and has nixed them on ridiculous and subjective grounds. You can see more of this history in the letter from FIRE to the President of Truman state (pdf here).

Earlier, Truman State students sought to create a Vegetarian Club, which was rejected because an evaluator said that such a diet could be harmful to some people and that “there could be the potential risk of miseducating people interested in joining the club/lifestyle.” The club was rejected three times.

In October of this year, sophomore Naomi Mathew, pictured above, tried to start an “Animal Alliance” club to promote animal rights. Mathew did everything necessary to get official status, including procuring an advisor, identifying more than ten interested students, and filling out an application form. After a hearing, that club was also rejected because of the potential “risk brought about by [Animal Alliance’s affiliation with PETA]”, because there was “a high emotional and reputational risk” to the university, and because they were worried about having to get police for the club’s events.

FIRE’s letter shows that Truman State has a history of this kind of dumb censorship of clubs. To wit: 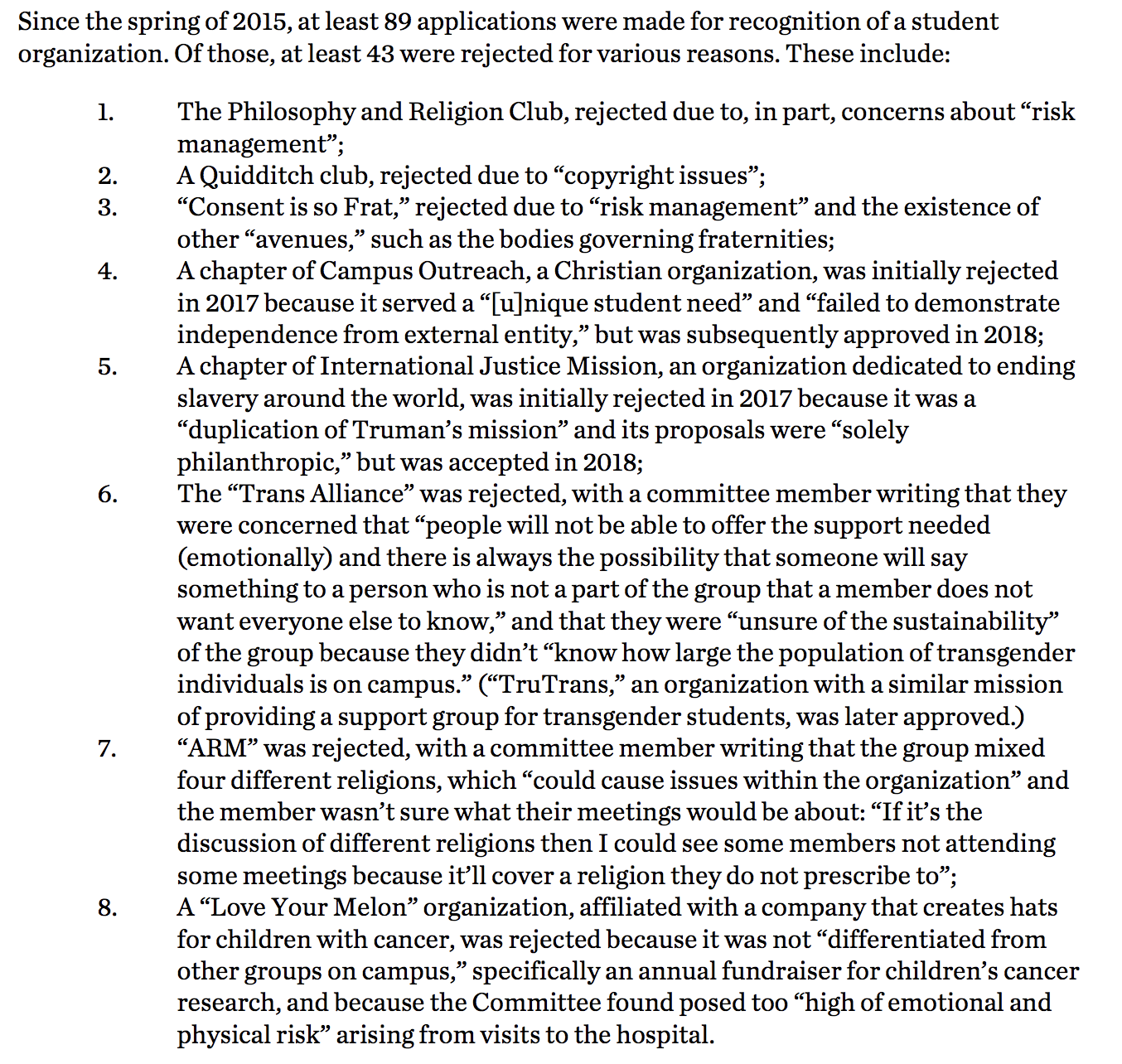 Note that several of these rejections involved clubs having to do with religion, and at any rate, the reasons given for rejection are laughable. But the rejections themselves are not: as FIRE argues, these are violations of the First Amendment, citing a Supreme Court decision overturning a college’s rejection of the radical Students for a Democratic Society group. The Court ruled that “denial of official recognition, without justification, to college organizations burdens or abridges [the associational right] implicit in the freedoms of speech, assembly, and petition.”

Yes, the university had “justification” to reject all these applications, but FIRE argues that the criteria it used don’t meet the objective criteria they lay out in the rules, but add subjective factors like “emotional risk” or whether they see the club’s advocates as “sufficiently passionate.” The rejection of religious clubs is particularly offensive, abrogating freedom of religion. And of course arguing against a vegetarian club because the lifestyle is unhealthy is laughable: tell that to a gazillion Indian people!  FIRE makes other arguments, too, but you can read their 12-page letter for yourself. In the net, FIRE asks for Truman State to stop using subjective criteria for evaluating clubs and organization and to recognize the Animal Alliance as a valid club. There’s also an implied threat at the end that should worry the school:

Universities may use objective criteria to grant or deny student groups’ bids for official recognition. But Truman State’s subjective process violates students’ First Amendment rights and results in a double standard, with some controversial groups approved and others ousted. FIRE will continue to monitor the situation and use all the resources at its disposal to ensure a just outcome.

Read: lawsuit, which will cost Truman State a lot of dosh and probably a legal defeat as well.

FIRE gives a contact information to Truman State as well, and I’ll be writing the President an email. It’s time for the school to stop abrogating students’ Constitutional rights. Though this sounds like a small matter, one can’t allow colleges to begin eroding the rights of students in public schools, because this truly is a slippery slope.