60 Minutes is the only non-evening-news show I watch on television, but I missed this week’s episode that included a 13-minute segment on Harvard /MIT geneticist George Church. I’ve written about Church before, but only to kvetch about his accommodationism, for he truly has a soft spot for religion, is a big-time accommodationist, and has pronounced that “the overlap between science and faith is vast and fertile.”  I believe I’ve also said that I think his project about “de-extincting” the wooly mammoth is a non-starter, as it won’t really revive that extinct species but merely genetically engineer a modern elephant to look like a wooly mammoth, having, for instance, more hair and longer tusks.

But that said, Church is an interesting guy and a scientific polymath, with all kinds of interests. Fortunately, 60 Minutes has put the segment on Church online, and you can see it by clicking on the screenshot below (I’d watch it soon before it disappears).  The site also has a transcript in case you’d prefer to read than to watch: 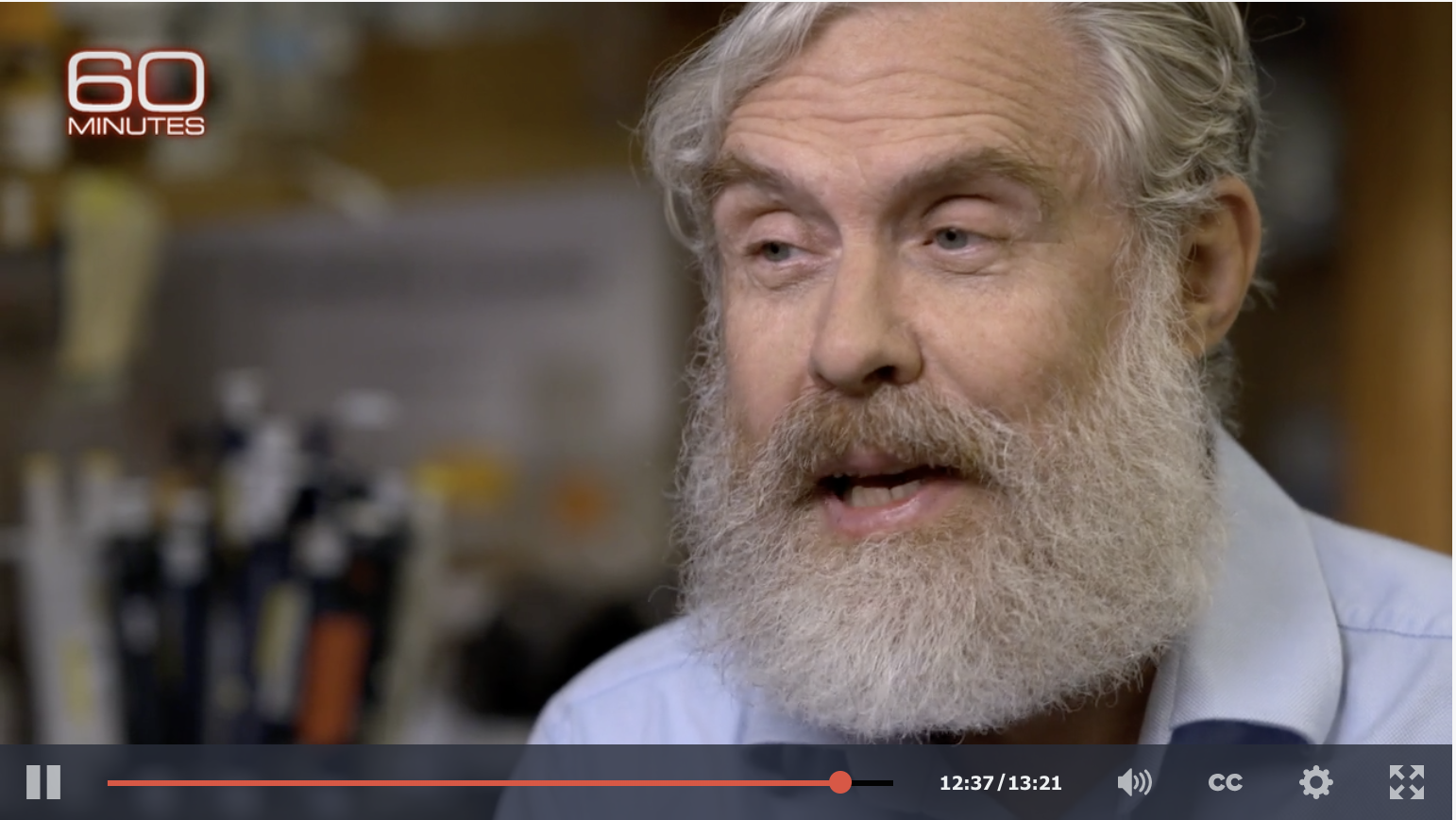 Extra segments include a two-minute extract in which Church discusses the money he took from Jeffrey Epstein (he says he didn’t know much about Epstein, though it’s not clear whether the man had already been convicted when Church took his dough), and a five-minute “overtime” segment in which interviewer Scott Pelley asks Church about the ethics of genetic engineering.

Church mentions a number of projects his 100-person lab (!!) is engaged in, including engineering humans so they’re less susceptible to viral infection (at first I thought that wasn’t viable since viruses mutate so readily, but he wants to alter the human genetic code in such a way that impossible multiple simultaneous mutations in the virus would be required to overcome the immunity). That might be dicey, but other projects, like growing human organs from one’s own cell, or rendering pig organs feasible for transplants by engineering out the pig viruses that prevent that), seem more viable. They’re at least sufficiently attractive that investors have put hundreds of millions of dollars behind these projects.

Other projects include genetic engineering to reverse the aging process (it seems to work in mice, and he’s trying now in dogs), and a dating app in which your genome is compared to your partner’s to see if your kids could get any genetic diseases (this is a more sophisticated method of what genetic counselors already do, like telling two carriers of Tay-Sachs disease that there’s a 25% chance that a child could have the syndrome).

It’s an absorbing interview, though perhaps a bit shallow for those of us who already knew some genetics. But it’s still amazing to see the breadth of his interests and research.  He’s also “neuroatypical” and has narcolepsy, so you can see him fall asleep in class.

But all that genetic engineering talk has angered some people, like this one:

Geneticist here. This is eugenics and it’s wrong and George Church needs to just STOP. https://t.co/6KYasAlQUi

But we have to remember that “eugenics” include both negative eugenics (fixing broken genomes, preventing the production of offspring with genetic diseases, curing genetic diseases by injecting DNA) and positive eugenics, which is the engineering of humans with more positive traits, like higher IQs and so on. The former is far less problematic than the latter, which is seen as “playing God”,  but you can’t just dismiss all genetic engineering as undesirable “eugenics” and “wrong”.  Further, Church has an ethicist on his staff and has thought carefully about the ethics of what he’s doing, so he’s not some kind of Hitler.

Let’s face it: genetic engineering of humans is inevitable, starting with eliminating or curing genetic diseases, and there’s nothing wrong with that so long as people think carefully about what they’re doing and so long as the dangers of tinkering with our genome are known and accepted.

31 thoughts on “A profile of George Church on 60 Minutes”