The answer to the title question, in these days of polarization, is “Because he’s a billionaire”. With Democratic candidates like Bernie Sanders and Elizabeth Warren making political capital by demonizing the very rich, this effect has spilled over onto philanthropists, most notably one of the world’s greatest philanthropists, Bill Gates. Along with his wife Melinda, Gates gives away billions of dollars to good causes through the Bill and Melinda Gates Foundation (the Foundation’s website is here).

According to Wikipedia, the Gates couple are the second most generous philanthropists in the U.S.—after Warren Buffett. Over its history, their Foundation (henceforth GF) has given away $45.5 billion, almost half of Gates’s total wealth.  And they give to causes I like: they’re international, not focused on the U.S., and the money goes to projects that really save lives—curing malaria and infectious disease, getting people access to reproductive services and clean water, improving agriculture, and so on (see list below).

I was thus a bit nonplussed when someone called my attention to a tweet by Massimo Pigliucci, with whom I’ve squabbled several times in the past. Those squabbles have been mostly over scientism and the “demarcation problem”, or trying to fix a boundary between science and non-science. Pigliucci hates my view that plumbers, mechanics and the like practice “science broadly construed” when they use empirical methods to diagnose and fix problems. Frankly, I can’t be arsed to argue the point, since these people use the same empirical strategies as do scientists. It’s a semantic issue, really, with no practical consequences that I can see.

At any rate, here’s Massimo’s tweet, which links to a conservative Daily Wire article reporting Gates’s criticisms of Warren’s proposed wealth tax, as well as his unwillingness to make political declarations about whom he’d vote for in the next Presidential election.

Did you need another reason to despise Bill Gates? You're welcome. https://t.co/naSAjlSafW

And so, although almost never engage in Twitter disputes, I responded:

Yes, let's despise a man who's the world's greatest private philanthropist, who has improved the lives of millions of people immeasurably, and who wants to direct his money to good causes instead of having it spent on missiles. Attached: the Gates Foundation's donations: https://t.co/VlBZk4cgRe pic.twitter.com/PKC3izndvA

And then Massimo shot back, citing the GF’s work on charter schools (Note about the tweet just below: my content is “not shown” on some people’s Twitter sites because in the past I’ve posted “objectionable” material like Jesus and Mo cartoons. Even the most innocuous things are hidden unless you click the “show media” button.)

Oh Jerry, so you drank the kool-aid too. How sad. The point is that a democratic society should not rely on the charity of billionaires. Also, do you count his systematic attempts to undermine public education as another success?

I gave up at this point, as a Twitter war is the last thing I want; they’re almost completely useless.

But yes, a democratic society, in principle, shouldn’t have to rely on the charity of billionaires. Still, poor Massimo is missing the point with his “kool-aid” remark. As a philanthropist whose interests are helping the most deprived on the planet, Gates wants his money to go to people in poor countries, not to be sucked up by the U.S. government for missiles, border walls, or other dubious projects.

As for Gates’s “attempts to undermine public education,” I know the GF promotes charter schools, and I have mixed feelings about that, but on balance who can argue that Gates has been a bad influence on the world and should be “despised”? Only a splenetic Pecksniff like Pigliucci.

And who can argue that, given that Gates has pledged to give away most of his fortune, and is already doing so, that he might propose that he can put it to better use than the government grabbing it a large amount of money that could be used for better purposes?

I’m not arguing that richer people shouldn’t pay more taxes, for they should. I’m arguing that the demonization of Bill Gates on the basis of a couple of things he said is unwarranted—a sign of the “eat the rich” sentiment that has enveloped many progressive Democrats.

And that is what Matt Johnson argues in this new article in Quillette (click on screenshot). 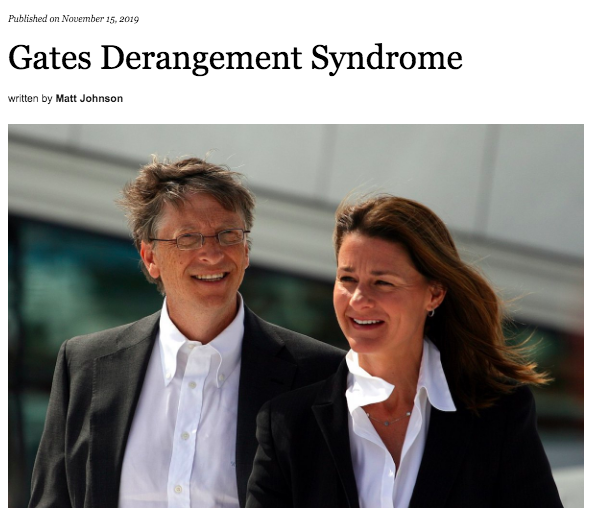 Johnson is identified in the piece as a writer for places like Stanford Social Innovation Review, the Bulwark, Editor & Publisher, Areo Magazine, Arc Digital, Splice Today, Forbes, and the Kansas City Star. It adds that “he was formerly the opinion page editor at the Topeka Capital-Journal.”

First, Johnson recaps what most people can easily find out about the GF:

Between 1994 and 2018, Bill and Melinda Gates personally donated $36 billion to the foundation, which has issued more than $50 billion in total grant payments since its inception.

A glimpse of what that money has accomplished: The Gates Foundation was a founding partner of the Global Alliance for Vaccines and Immunization (Gavi), pledging a five-year commitment of $750 million which launched the program in 1999. Since 2000, Gavi has immunized more than 760 million children to protect them from rotavirus, meningitis, polio, measles, and many other deadly diseases. The World Health Organization and UNICEF estimate that Gavi has saved 13 million lives since its inception. After providing the seed money for Gavi, the Gates Foundation continued to support the program with billions of dollars—$4 billion to date, and $1.5 billion between 2016 and 2020 alone, around one-fifth of all donations. And this is just one of the programs the foundation supports—in 2018, it spent more than $4.3 billion on global health and development. When Singer credited Bill and Melinda Gates with saving several million lives, it was almost certainly an understatement.

Then Johnson takes on writer and journalist Anand Giridharadas, who goes after Gates in a video I can’t see, but also in an interview:

But the mask, according to Giridharadas, has finally slipped. He cites an interview at the New York Times DealBook Conference in which Gates argued that Elizabeth Warren’s wealth tax is too extreme: “I’ve paid over $10 billion in taxes. I’ve paid more than anyone in taxes. If I’d had to pay $20 billion, it’s fine. But when you say I should pay $100 billion, then I’m starting to do a little math about what I have left over.” Giridharadas quoted this portion of the interview and then observed: “When you start to come after his wealth, even Bill Gates gets cagey.” Neither Giridharadas nor the Mediaite article he cited bothered to report the lighthearted tenor of these remarks, or that Gates immediately followed them by admitting, “I’m just kidding.”

I haven’t seen a single report before this one that Gates’s remarks were lighthearted or especially that he said, “I’m just kidding.”

The Presidential-candidate issue was mentioned by MyNorthwest.com, which noted that Gates refused to commit to saying which candidate he favored in 2020 if the election were between Warren and Drumpf:

At a New York Times conference, when asked who he would choose between Senator Elizabeth Warren and Trump, the Microsoft didn’t want to commit and said he’d vote for the more professional candidate, leaving his decision open to interpretation.

That puzzled me at first, but I think Johnson’s explanation below is correct, especially given the data I show after the quote:

. . . Finally, Gates specifically said he isn’t interested in making “political declarations,” about which he has every reason to be wary.

The Gates Foundation works closely with U.S. foreign aid agencies. Would it really make sense for Gates to openly antagonize a vindictive president who’s already deeply hostile to foreign aid spending? The Trump administration tried to cut State Department and USAID funding by 28 percent in 2017, which would have meant dramatic cuts in global health and humanitarian assistance.

In fact, as OpenSecrets.org notes, contributions from the GF to politically affiliated recipients go overwhelmingly to Democrats: 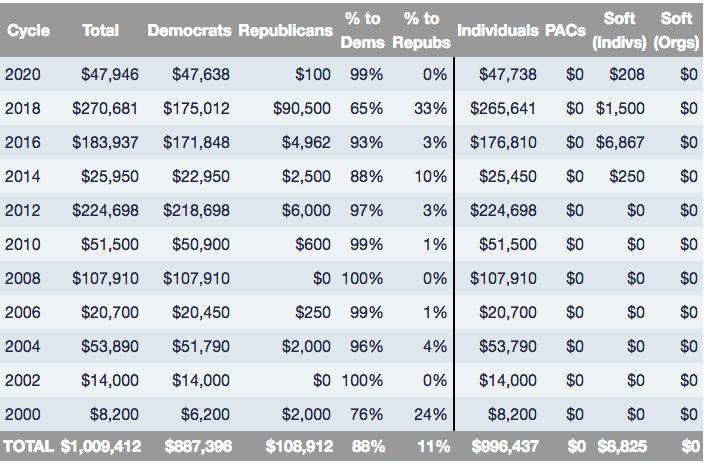 This is what I’d expect given Gates’s generally liberal views. Do people really think he would vote for Trump? I think the hypothesis that he doesn’t want to rile up an irascible President is a decent one.

Further, money diverted from Gates’s assets for taxes will go to the U.S. government, which means U.S. projects, which in turn means largely for defense (about 22% of Americans’ taxable income goes to the Department of Defense). Gates want his bucks to be used where they have the biggest bang: in poor countries:

There’s a good reason why Bill and Melinda Gates focus on international programs to alleviate poverty and control infectious diseases: That’s where their fortune can do the most good. There are still 736 million people living on less than $1.90 per day, while half the planet lives on less than $5.50 per day. Meanwhile, according to the World Health Organization, “In 2018 an estimated 6.2 million children and adolescents under the age of 15 years died, mostly from preventable causes. Of these deaths, 5.3 million occurred in the first five years, with almost half of these in the first month of life.”

Apparently so! Look, there are lots of rich people who sit on huge amounts of wealth and don’t give much of it away, retaining far more than they need to sustain even a hugely lavish lifestyle. But Bill and Melinda Gates are not among them. If you want to demonize somebody, there are lots of obscenely rich people who do all they can to keep their wealth. And you might want to go after Gates because you don’t like what he did when founding Microsoft. But what you shouldn’t go after him for is his unwillingness to commit to a Presidential candidate right now.

Even the abstemious and charitable philosopher Peter Singer defended Gates when speaking against the motion “It is immoral to be a billionaire” at a Oxford Union debate. Johnson reports Singer’s words:

“If you vote for this motion, you are condemning all people who are billionaires … You’re saying that Bill and Melinda Gates are immoral, despite the fact that they set up the Gates Foundation,” an organization which has “undoubtedly already saved several million lives.”

It’s strange that Pigluicci “despises” Bill Gates, a man whose presence in the world has saved and improved innumerable lives. And isn’t that a good way to measure the value of someone’s existence? But Pigliucci, who spends his days making a career out of the futile task of staking out the borders of science, seems unable to recognize a net good when he sees it. That’s odd for a philosopher, isn’t it?

For those of you who want to pile onto Bill Gates in the comments—and feel free to do so—ask yourself if you’ve done even a thousandth as much for the planet as has Gates.

299 thoughts on “Why do people hate Bill Gates?”