Timothy Egan is a liberal op-ed columnist for the New York Times, and has the credentials to prove it, including a share in the Times’s Pulitzer Prize for its series “How Race is Lived in America”. (He also has a National Book Award for nonfiction for his 2009 book The Big Burn: Teddy Roosevelt and the Fire that Saved America.)

It would be hard, then, for leftists to dismiss Egan as an alt-righter or white supremacist, though I suppose that, as he was born in 1954, he could be denigrated as a “boomer.” (That, of course, is ageism.) But I suppose they’ll try, as is always the case when somebody writes a piece like Egan’s latest for the NYT (click on the screenshot below):

The exemplar of someone who’s turned off by “insufferable wokeness” is Egan’s sister, who works cleaning toilets at Wal-Mart:

No matter how much I point out that Trump is trying to take away her health care protections by litigating to kill Obamacare, that his tariffs have made it harder to pay her bills, that he is the most repulsive and creepy man ever to occupy the White House, she holds firm.

Why? One reason is what she hears from the other side. Many Democrats, she says, are dismissive of her religious beliefs and condescending of her lot in life. She’s turned off by the virtue-signaling know-it-alls.

She’s clearly someone who would be tossed into (and resent being in) the “basket of deplorables” described by Hillary Clinton. Egan goes on:

It’s no mystery why so many Democrats can no longer connect to the white working class. Progressives promise free college, free health care, free child care, and scream in bafflement, What’s wrong with you people?

No doubt, some of those people are racist and xenophobic. But many others simply feel insulted and dismissed. And these are voters who can still be persuaded to save our country from a disastrous second term of a corrupt and unstable president.

Well, I’m not nearly as worried as I used to be that Trump will be re-elected. He will be impeached, but probably not convicted, but he’s now so far beyond the pale as a leader that I simply can’t believe that the American public would choose him again. And with that conviction (and of course I may well be wrong), comes a reduction in my fear that fulminating wokeness could hurt the Democrats.

But it can still hurt the country, for the woke are Authoritarian Liberals (or, if you will, Control-Leftists), and they will be a prominent segment of the future leaders and opinion makers of America. And so it behooves us to consider which parts of wokeness are worth considering and which are worth mocking the reviling.

That’s a lot of what this website does. And that’s why I liked Obama’s recent call-out of “cancel culture”, which only got him dismissed as a privileged Boomer, despite every indication of his concern for the oppressed. He did, after all, propose “Obamacare.”

And yes, I’d vote for Warren, but I’m more aligned with Mayor Pete, and so, it seems, is Egan. As an old liberal, I still find Warren not only too progressive, but hectoring, a bit mendacious, and unwilling to compromise to win an election. (Compromise, after all, isn’t a dirty word, but the essence of successful legislation in a democracy). Warren needs to tone down her healthcare promises and come up with a plan for regulating immigration that doesn’t look like open borders (she’s good with plans). Egan continues;

For the record, I’m agnostic on the Democratic field. I would vote for a tree stump if it could beat Trump. Biden, Obama and Nancy Pelosi, along with recent polling and the election results on Tuesday, all show that the best way to rid this country of Trump is for Democrats to dial back the condescension of their natural allies and dig into the gritty concerns of daily life.

Pete Buttigieg, looking to pick up the moderate left vote if Biden falters, has already taken Obama’s lesson to heart. “I’m not about being in the right place ideologically, whatever that means,” he said in Iowa last week. “I’m about having answers that are going to make sense.”

One of the biggest takeaways from the recent New York Times/Siena College survey of battleground states is that Elizabeth Warren is not connecting with the very people her policies are supposed to help. Trump beats her or runs even in every tossup state but one. The persuadable voters in these states, many of them working class, say political correctness has gotten out of control, and they prefer someone seeking common ground over someone with a militantly progressive agenda.

It’s worth remembering that nearly two-thirds of all American adults do not have a four-year college degree. Warren, the Harvard professor who recently suggested that moderate Democrats belong with the other party, could be more effective with these folks if she showed more of her daughter-of-a-janitor side.

. . .the inconvenient fact remains that a relatively small pool of working-class voters in the handful of battleground states are still likely to determine the fate of the country next year.

Democrats flipped 40 House seats in 2018 and attracted more white working-class voters — without insufferable wokedness. They hammered away on health care and kitchen table concerns. The same approach helped Democrats pull off an apparent upset in the Kentucky governor’s race this week.

Finally, Egan gives some statistics (also mentioned by Andrew Sullivan in his excellent rundown of Trump’s crimes this week). Those statistics come from the article below (click on screenshot): 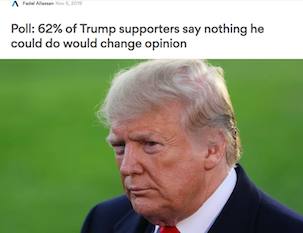 Next year, Trump will be the greatest motivator and unifier for a majority of Americans poised to throw him out. For his core 40 percent, there’s no crime or debasement that will change their minds. He can indeed shoot someone, as a focus group participant helpfully clarified this week, and likely get a pass from the Cult of Trump.

Yes, but Trump’s disapproval rating is rising (it’s now over 50%). On the other hand, what is Elizabeth Warren’s approval rating among Americans as a whole? (Someone please enlighten me). In the end, I conclude that Egan’s being a bit dramatic in his last paragraph:

But for others, those like my sister, a word to Democrats: Talk to them. Don’t talk over them. Save the piety, the circular firing squad, the shaming on social media for after the election. Otherwise, the woke will wake next Nov. 3 to a tragedy.

Still, Warren would be well advised to heed this advice if she wants to be the Democratic candidate, much less a winning one. But I’m still keeping my fingers crossed for Mayor Pete.