I’m too busy watching glaciers go by in the Beagle Channel to post much today. The Channel was in fact where Darwin saw his first glacier, and it’s cool to think that I’m seeing the same glaciers that he did.

But on to the opinion of the day. This time it’s a beef about Obama’s recent critique of “cancel culture.” You might remember that the ex-Prez said stuff like this at a meeting of the Obama Foundation in Chicago:

Mr Obama told the audience: “I get a sense among certain young people on social media that the way of making change is to be as judgemental as possible about other people.

“If I tweet or hashtag about how you didn’t do something right or used the wrong verb, then I can sit back and feel pretty good about myself because ‘Man did you see how woke I was? I called you out!’”

“That’s enough,” he said. “If all you’re doing is casting stones, you are probably not going to get that far.”

Mr Obama added that “people who do really good stuff have flaws”.

This set up a severe bout of cognitive dissonance within the Authoritarian Left, who worship Obama (and for sure he was a good President and a good man), but suddenly heard him taking out after wokeness. What is an Antifarian to do?

It was inevitable that they decided to put their own emotions and penchant for calling out others on social media above the views of the ex-President. They can’t criticize him as a racist, but they can (and did) say that he’s simply old, grumpy, privileged, and not in tune with the young people. And that’s what journalist Ernest Owens said in a New York Times op-ed (click on screenshot; you can see Owens’s HuffPost biography  here)

As you see from the subtitle, Owens dismisses Obama’s views because he’s “old” (for chrissake, the man is 58) and “powerful”. Owens doesn’t tell us why his power—now much less than four years ago—should be important. But let us make no mistake, Owens practices the very form of bigotry denigrated by his cohort—ageism:

[Obama’s] eagerness to dismiss one part of what happens when young people stand up for what they believe in as “casting stones” is a reminder of a largely generational divide about whether it’s impolite to speak out in favor of the most vulnerable among us and the world we’d like to live in. While there’s some debate about which generation Mr. Obama belongs to, he’s solidly in the older camp.

Okay, fine. But let’s ignore Obama’s demographics rather than do what the woke regularly do: concentrate on someone’s age, identity, and ethnicity as a substitute for engaging their arguments. What, says Owens, is Obama doing wrong? Apparently dismissing real concern for social justice, manifested as online “activism” ostensibly trying to repair society’s inequalities.

What members of older generations now dismiss as “cancel culture” — or, as Mr. Obama put it, “being judgmental”— is actually one of many modern-day iterations of protests they took part in when they were younger. Students at the University of Pennsylvania using social media to push for the cancellation of a campus event including a former Trump administration Immigration and Customs Enforcement director is not totally unlike college students using bullhorns to criticize apartheid in South Africa in the 1980s.

This is ridiculous. Using a bullhorn to cancel a campus event is a disruptive violation of free speech. You can criticize someone or their views without silencing them. Martin Luther King silenced nobody; he was eloquent in both his speech and his actions, and often practiced counterspeech against Southern racists. But he didn’t demand that anybody shut up.

Now that we know which side Owens is on, we can proceed:

Hashtags such as #BlackLivesMatter, #MuteRKelly, #MeToo and others that were created by black women online aren’t all that different from the picket signs and petitions our parents used to demand racial and gender justice. Of course, we take part in more traditional activism, too. But today we have additional tools. Why wouldn’t we use them?

It’s almost as if Owen didn’t even absorb what Obama was getting at. There’s nothing wrong with using social media as a tool to rectify injustice. What Obama emphasized was that the way the tools are used are often impotent or counterproductive at rectifying the problems addressed. They’re used to demonize opponents, cast oneself as a victim who cannot be criticized, and promote a Manichaean view of the universe in which opponents aren’t lured into the Big Tent, but cast out of it into the lowest circle of hell. I, for one, can’t imagine Martin Luther King calling out dreadlocks, hoop earrings, or those who fail to censor themselves when singing along to rap music. King had, as they say, his eyes on the prize: civil rights legislation.

Then Owens goes after Obama’s “privilege”, linking him to white straight men and ultra-right conservatives who are most “agitated by this form of online activism”. I’m not sure whether that’s true, as there are plenty in the center and on the Left, as well as the poor, who are turned off by cancel culture. Just look at leftists who object to the Islamist views of Ilhan Omar, or the Jews who don’t like cancel culture’s demonization of Israel and the Jews in general. And it’s not just Republicans who were upset when Al Franken became a victim of cancel culture. The problem with that culture is that it can’t distinguish between the meaningful and the trivial.

The objection to cancel culture, then, is several fold: it is based on emotion, the idea of oneself as a victim, the view that one’s opponents must be demonized permanently, the histrionic idea that one’s ideological opponents must be racists, misogynists, or alt-righters, and, above all, promotes the kind of activism that accomplishes almost nothing. It one thing to sit at lunch counters or put oneself under the truncheon of an Alabama cop, another thing entirely to emit a splenetic tweet.

Owens goes on, and started to give me a pain my kishkes when he tries to lump Obama in with Trump, the Koch Brothers, Mitch McConnell, and other Old White Privileged Men:

It’s telling that it’s the powerful and privileged people in society who are most agitated by this form of online activism, and most convinced that it represents unnecessary evil that is tearing away at our civil discourse. The group that Mr. Obama joins in his scolding of outspoken young people is dominated by white straight men, far-right conservative talking heads, and celebrities who feel entitled to audiences who appreciate their art and dutifully ignore their missteps. It’s no surprise that Fox News fretted that his comments were “snubbed” and didn’t receive sufficient coverage from broadcast television networks.

This really burns my onions. It’s not an answer to Obama’s arguments, but a claim that he deserves no attention because of the company he keeps. And so Owens himself shows the weakness of the very culture he espouses.

What people of Obama’s generation don’t understand — or don’t want to understand — about the ways in which younger people use the internet to make our values known, is that we’re not bullies going after people with “different opinions” for sport. Rather, we’re trying to push back against the bullies — influential people who have real potential to cause harm, or have already caused it.

. . . We have a tool that has helped democratize public debates about these issues, and we hope it will move us to a more just world.

Fine. Keep using your social media to call out “harms” like reading Huckleberry Finn without bowdlerization, of writing literature from the point of view of members of other cultures, of making General Tso’s chicken the wrong way, of showing Westerners what it’s like to wear a kimono, of allowing free speech at the University of Chicago (that speech, of course, causes the “harm” of hurting people’s sentiments), and of casting every offense, however slight, as “violence.” Keep using your social media, and we will tell you when you’re using it in a ludicrous manner, which is often.

I wouldn’t trade a thousand social justice warriors hammering away on their keyboards for one ex-President Jimmy Carter, hammering away building houses for Habitat for Humanity. Typing is easy, but unless you’re Karl Marx or Martin Luther King, with their passion for big issues, your efforts are lame.

Here’s one comment on the NYT piece that gets it pretty much right: 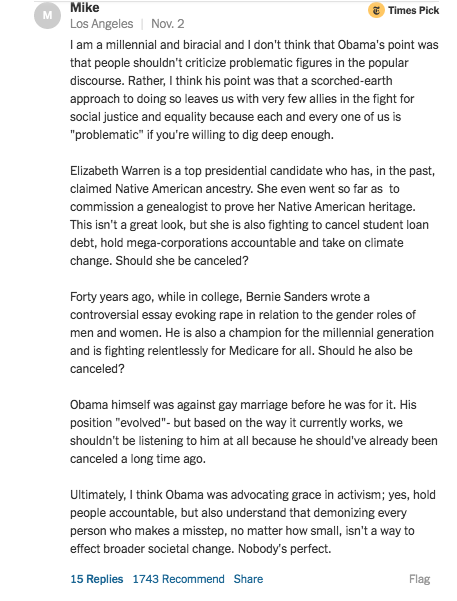