0This just in: the Nobel Prize for Physiology or Medicine was awarded to the three people below (click on screenshot to go to the Nobel site): 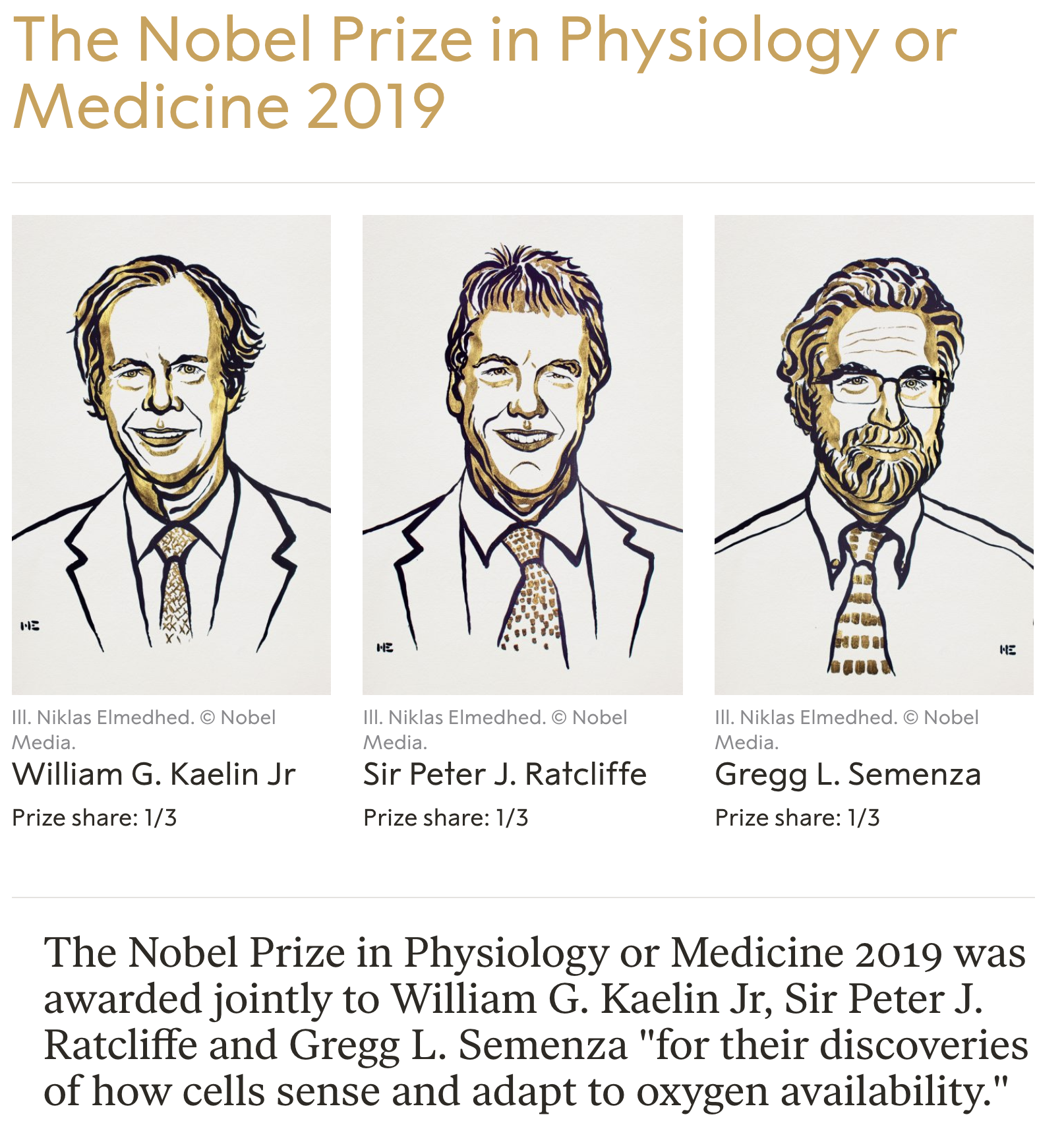 I don’t know these researchers, nor much about their work, but I’ve put an informative video below (which shows you how the Prizes are announced, and what garnered one this year), and this is from the CNN report:

The 2019 Nobel Prize in Medicine has been jointly awarded to William Kaelin Jr., Sir Peter Ratcliffe and Gregg Semenza for their pioneering research into how human cells respond to changing oxygen levels.

Announcing the prize at the Karolinska Institute in Stockholm on Monday, the Nobel committee said that the trio’s discoveries have paved the way for “promising new strategies to fight anaemia, cancer and many other diseases.”

The importance of oxygen has long been established, the committee explained, but how cells adapt to changes in its levels remained unknown.

“This is something basic biology students will be learning about when they study, at aged 12 or 13, or younger, biology and learn the fundamental ways cells work,” he said.

“This is a basic aspect of how a cell works and, from that standpoint alone, it’s a very exciting thing.”

All three scientists worked independently over a period of more than two decades to establish how cells can sense and adapt to changing oxygen availability. The 2019 prize laureates, the committee said, identified molecular machinery that regulates the activity of genes in response to varying oxygen levels.

Johnson added that the laureates had “greatly expanded our knowledge of how physiological response makes life possible” and were “necessary actors in figuring out how this whole thing works.”

Explaining why the scientists were being recognized for the award, which is officially known as the the Nobel Prize in Physiology or Medicine, this year, Johnson said their discoveries were now a “complete and clear story.”

“It’s very clear that we now understand this fundamental biological switch that really impacts all our lives as living creatures here on earth breathing oxygen.”

As I said in my tweet, I thought this would be the year that the CRISPR gene-editing system would garner the Prize, but there may be some controversy about exactly which researchers should get one (many have worked on it, and a Prize can be split between at most three scientists).

Here’s the announcement, along with a nice presentation of the work’s significance: