In this piece from last Wednesday, Amelia Thomson-DeVeaux in Five Thirty Eight (henceforth “538”) discusses the increasing religious nonbelief of liberals, as opposed to that of conservatives or moderates. (Click on screenshot to read.) 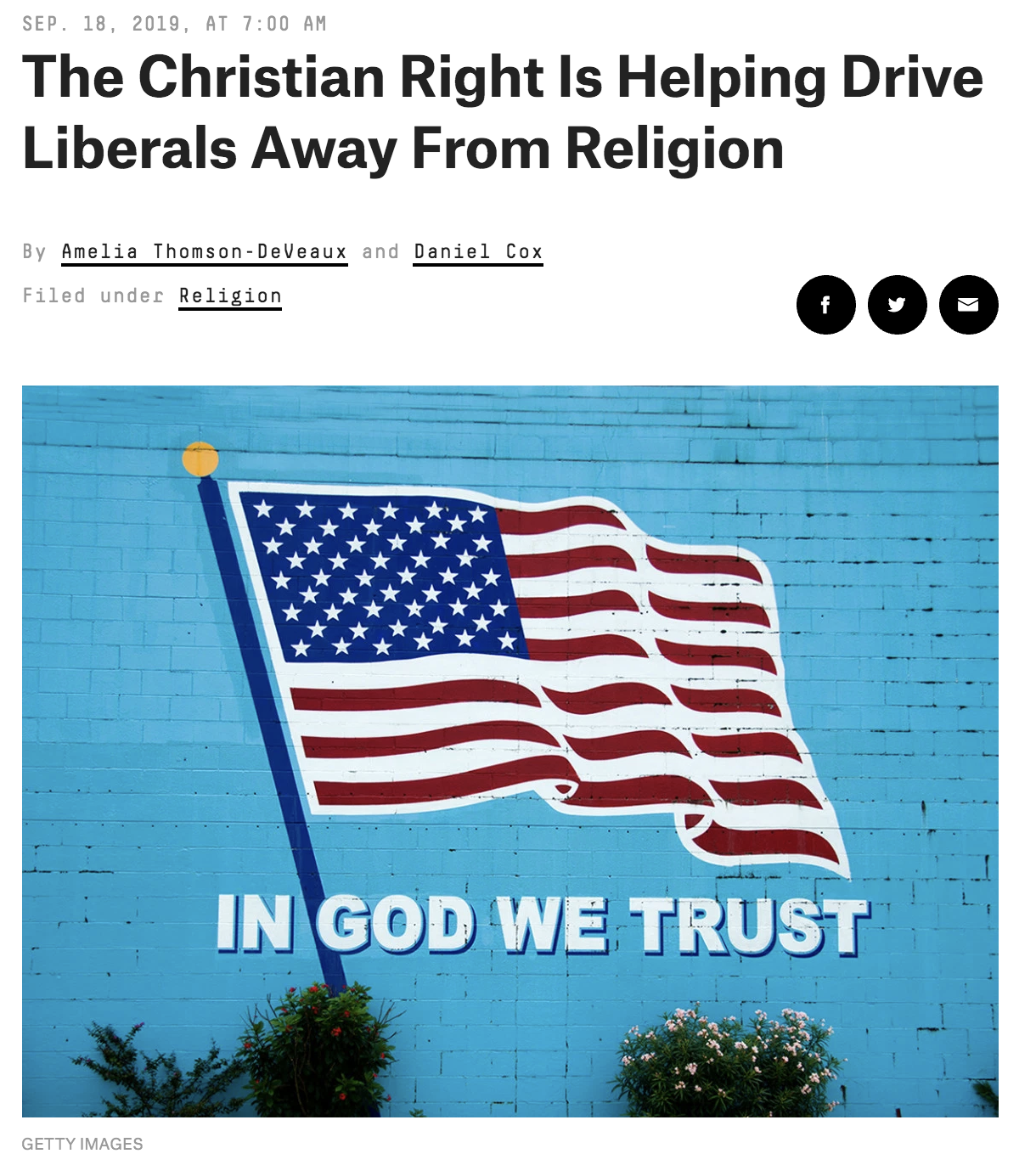 There’s little doubt that liberals are losing their faith (or not taking up faith) at a higher rate than are other political groups, as you can see from this graph: 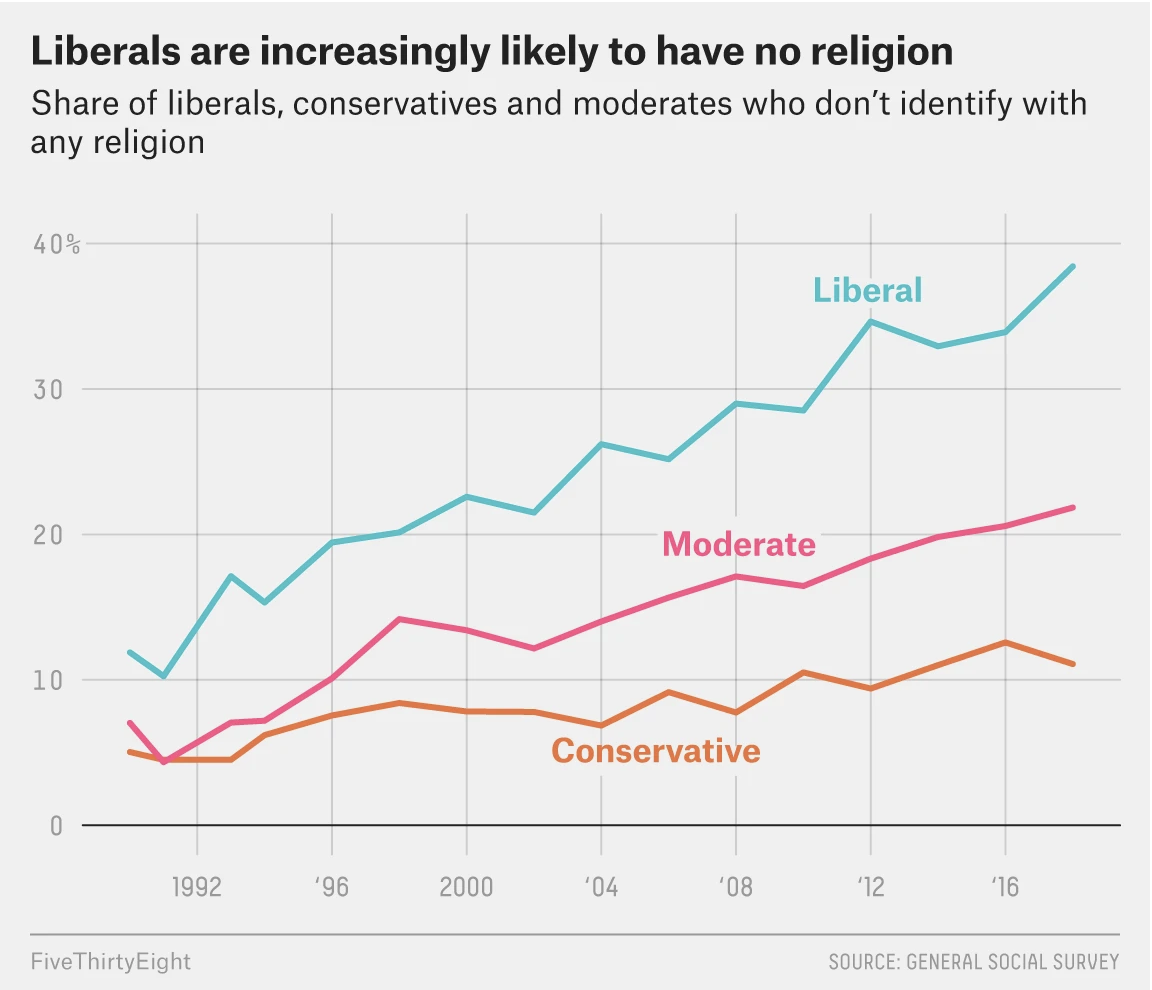 And, as a group, the more liberal you are, the more likely you are to be a “none”: those people unaffiliated with a religion or church. (Note: nones can believe in God, though many don’t.) As 538 notes:

As recently as the early 1990s, less than 10 percent of Americans lacked a formal religious affiliation, and liberals weren’t all that much likelier to be nonreligious than the public overall. Today, however, nearly one in four Americans are religiously unaffiliated. That includes almost 40 percent of liberals — up from 12 percent in 1990, according to the 2018 General Social Survey. The share of conservatives and moderates who have no religion, meanwhile, has risen less dramatically. 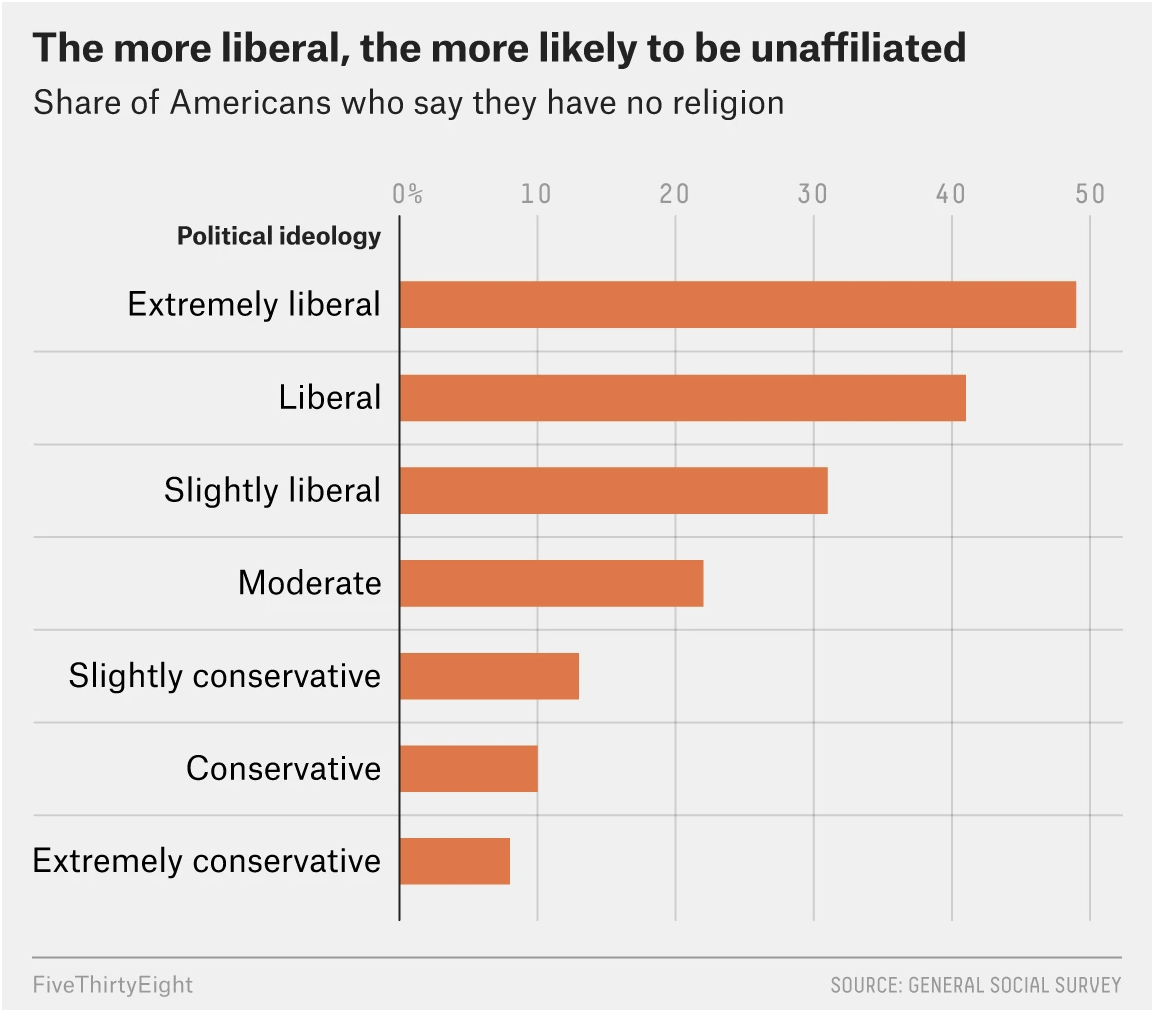 Other statistics quoted by Thomson-DeVeaux:

This difference, and the trend, are facts that have been documented before. There are two questions, however: why the connection between political ideology and religiosity?, and “why are liberals becoming secular faster than those adhering to other ideologies?” While Thomson-DeVeaux doesn’t answer the former, I’m not sure that her answer to the latter question is correct.

What’s her explanation? That as the Right becomes increasingly religious, and its political stands increasingly bound up with Christian dictates, it’s driving people (especially young people) to the Left. And that may be true, at least in part. But the evidence adduced by 538 to support this claim isn’t very convincing. Here it is:

For one thing, the timing made sense. In the 1990s, white evangelical Protestants were becoming more politically powerful and visible within conservative politics. As white evangelical Protestants became an increasingly important constituency for the GOP, the Christian conservative political agenda — focused primarily on issues of sexual morality, including opposition to gay marriage and abortion — became an integral part of the the party’s pitch to voters, but it was still framed as part of an existential struggle to protect the country’s religious foundation from incursions by the secular left. Hout and Fischer argued that the Christian right hadn’t just roused religious voters from their political slumber — left-leaning people with weaker religious ties also started opting out of religion because they disliked Christian conservatives’ social agenda.

Yes, but a temporal correlation is not a causation. Perhaps the causes were reversed: the Right became more Christianized as a reaction to what they saw as an increasing secularization of America—a trend that is pervasive not just in the U.S. but in the West as a whole. I think secularization is inevitable given the rise of science, the spread of education, and the lack of evidence for religious claims that, in earlier times, seemed to be the only explanations for phenomena now seen to be purely naturalistic.

But within the past few years, [Michele] Margolis and several other prominent political scientists have concluded that politics is a driving factor behind the rise of the religiously unaffiliated. For one thing, several studies that followed respondents over time showed that it wasn’t that people were generally becoming more secular, and then gravitating toward liberal politics because it fit with their new religious identity. People’s political identities remained constant as their religious affiliation shifted.

Yes, but the question is why their religious affiliation has shifted. Young people throughout the West are becoming more secular, and it can’t always be in reaction to Right-wing religiosity.  As The Washington Post reported in 2016, exactly 0% of young Icelanders believe that God created the Earth, and the secularization of that nation is increasing very quickly: 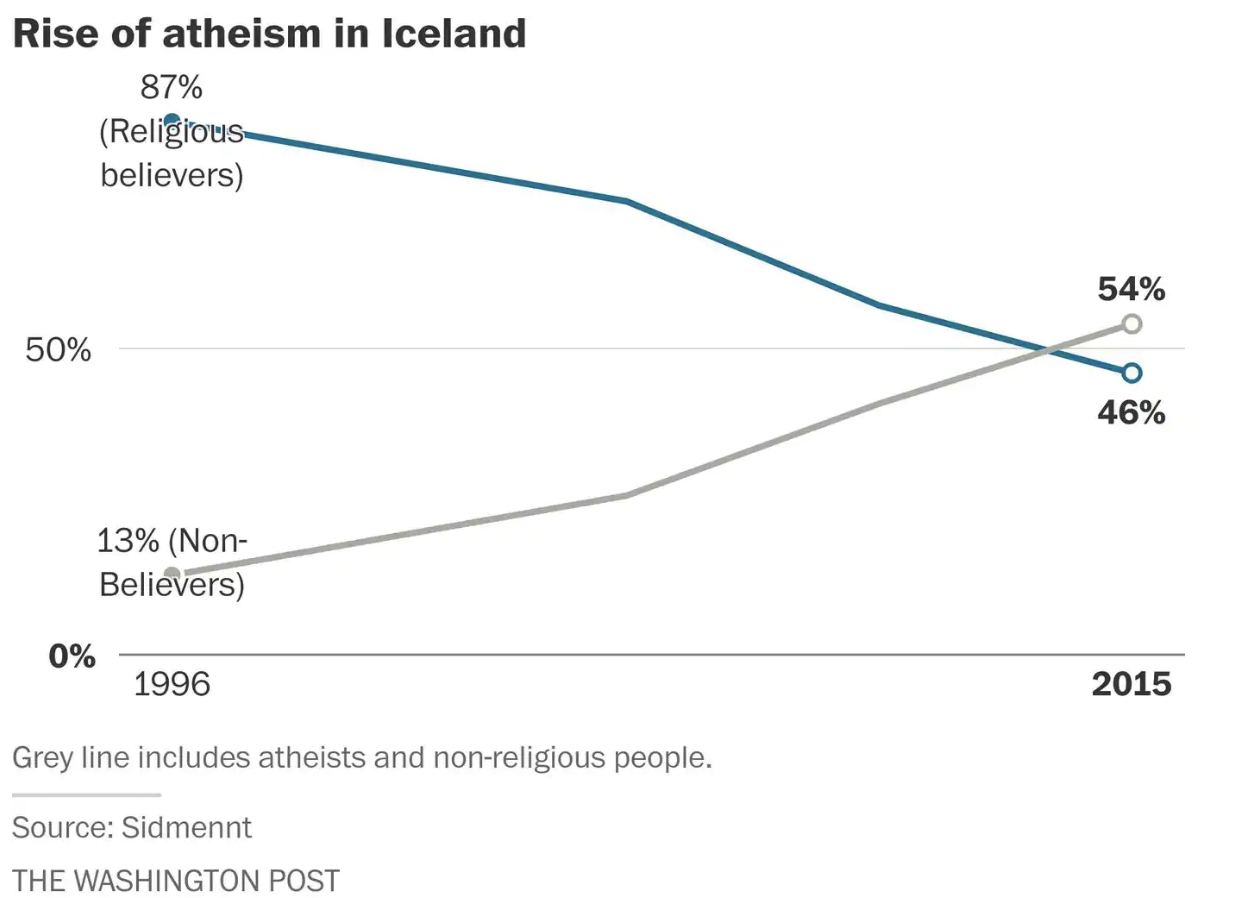 But this can’t be due to a reaction against the Right, as Icelandic politics are in general progressive, and I could find no evidence that the more conservative politicians are increasingly embracing religion. I think it’s far more likely that Bjarni Jonsson is correct when he says:

Other research showed that the blend of religious activism and Republican politics likely played a significant role in increasing the number of religiously unaffiliated people. One study, for instance, found that something as simple as reading a news story about a Republican who spoke in a church could actually prompt some Democrats to say they were nonreligious. “It’s like an allergic reaction to the mixture of Republican politics and religion,” said David Campbell, a political scientist at the University of Notre Dame and one of the study’s co-authors.

The first paper (pdf here)says this:

Rising none rates are more common in Republican states in this period [2000-2010]. Moreover, when the Christian Right comes into more public conflict, such as over same-sex marriage bans, the rate of religious nones climbs.

So yes, the greater the religiosity of a state, the faster the rise of the nones, but while this provides a modicum of support for Thomson-DeVeaux’s hypothesis, it doesn’t explain why the rise of secularism is higher among liberals than among more conservative groups. (I’m not rejecting her hypothesis, but arguing that the evidence is not very strong, and there could be other factors as well.

As for reading the news story—a classical undergraduate psychological “prompting” experiment—this is a short-term effect, and I’m wary of what this kind of study means. After all, one such study showed that after reading a “no free will” prompt, undergraduates cheated more often in an immediate psychological test. That led the authors, and many others, to claim that promulgating the doctrine of determinism would lead to society’s downfall. But at least two attempts to replicate that study, using identical methods, gave no result, and another study gave the opposite result. And really, is an effect that lasts ten minutes going to last a lifetime?

So while Thomson-DeVeaux might be partially correct in her “liberals become secular as conservatives cling to God” hypothesis, it’s likely not as simple as that.

The article concludes by suggesting that, in fact, this religious polarization of the electorate is a bad thing for Democrats, as it hurts that party’s need to collect religious voters, and also tends to polarize politics as a whole:

The political implications of this shift are already evident. As more liberals become nonreligious, the Democratic Party’s base is growing more secular, complicating the party’s efforts at reaching more religious voters.

. . . But [David] Campbell warned that this shift is already reducing churches’ ability to bring a diverse array of people together and break down partisan barriers. That, in his view, threatens to further undermine trust in religious groups and make our politics more and more divisive. “We have very few institutions left in the country where people who have different political views come together,” he said. “Worship was one of those — and without it, the list is smaller and smaller.”

My feeling about that: meh.  The Democrats are hardly touting their secularism and/or atheism; in fact, given the bad odor attached to nonbelievers in this country, Dems tend to avoid saying anything about their faith unless they’re already religious, like Pete Buttigieg.

Do we really want to pretend to believe in God so that we can herd believers into the Democratic party, or to reduce the polarization of American politics? We can for sure become more conciliatory, treating our opponents with more politeness and seeking consensus on issues that don’t involve religion. And we don’t have to proclaim our atheism when it’s not relevant. But we are nonbelievers and nones, and we’ve become that way not just because Republicans embrace superstitions, but because there’s no evidence for those superstitions.

32 thoughts on “Is the religiosity of the Right driving the secularization of the Left?”