We have four items today, including lagniappe.  The first video is of a feral mother cat carrying off a bag of food provided by kindly humans. Watch where she takes it.

If this doesn’t make you tear up, you’re made of stone. What a lovely story!

From BuzzFeed, we have a selection of rude cats. I’ll show just a few.

“I couldn’t breathe when I slept so I installed a camera” pic.twitter.com/DDhP0OweoW

From the Treehugger site, we get a useful lesson on why cheetahs can’t roar but some other big cats can:

Tigers, leopards, and jaguars all roar too. As members of the genus Panthera, not only are they totally fierce creatures, but the epihyal bone in the voice box is replaced by a ligament, explains BBC Wildlife Magazine. “This can be stretched, creating a larger sound-producing passage and thus a wider range of pitch. The more the ligament extends, the lower the sound generated when air passes across the vocal cords. In addition, the cords are large, unbroken and fleshy, which produces deeper sounds.”

In fact, one study found that a tiger’s roar has the power to paralyze animals that hears it, including human with experience around tigers.

And then there’s the cheetah.

Listen to the King of the Jungle (well, the savannah) sound off:

Weighing in at up to 150 pounds, cheetahs are the world’s fastest land mammal. They can accelerate from 0 to 60 miles an hour in only three seconds, striking prey in the blink of an eye. But fearsome as they may be, there is something they can’t do: Roar. Nope, cheetahs meow like a housecat. And, unlike their roaring cousins, cheetahs also have the ability to purr. Listen here:

BBC explains that the bones of the cheetah’s voice box comprise a fixed structure, with divided vocal cords that vibrate with both inhaling and exhaling. “This structure is the same for all the ‘small’ cats. While this design enables these cats to purr continuously, it limits the range of other sounds and prevents them from being able to roar.” Awww.

Cheetahs have also perfected the chirrup – a bird-like chirp they often use to locate one another.

Lagniappe: Not an ideal way to transport a kitten, but still better than nothing: 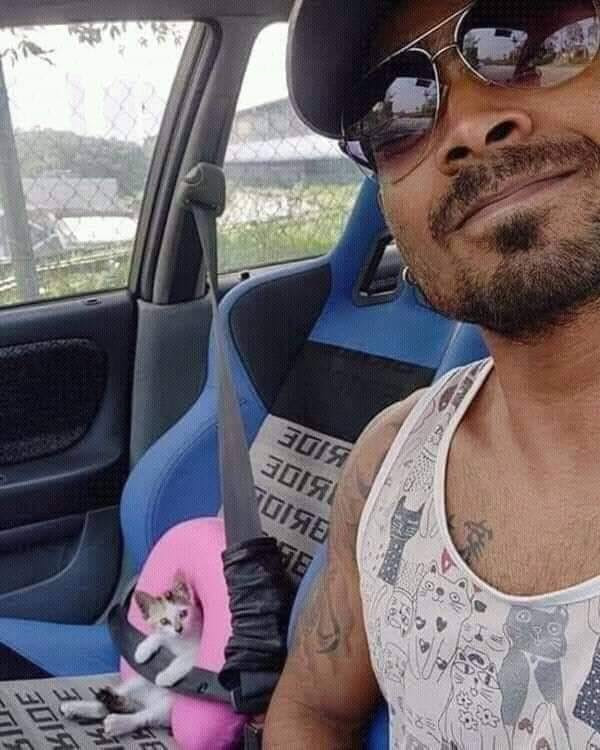 11 thoughts on “Caturday felid trifecta: Mother cat carries food to her one surviving kitten; rude cats; cheetahs vs. lions: one roars, the other meows and chirps (and lagniappe)”