Everyone knows about the “thoughts and prayers” sent out after tragedies as a quotidian feature of the daily news. And all of us nonbelivers disparage not only the use of prayers (shown in a Templeton-funded study to not have any effect on healing after surgery), but also the uselessness of thoughts—unless conveyed directly to the afflicted person instead of dissipated in the ether.

But an anthropologist and an economist wanted to know more: what is the value of thoughts and prayers (t&p)? That is, how much would somebody in trouble actually pay to receive a thought, a prayer, or both? And would it matter if that afflicted person was religious or just a nonbeliever? Or whether the person offering t&p was religious? So the study below was published in the Proceedings of the National Academy of Sciences (click on screenshot below; pdf here; reference at bottom).

I suppose that, to an economist, the psychic value of getting thoughts or prayers (t&p) from strangers can be measured in dollars, and I’ll leave that for others to discuss. At any rate, the results are more or less what you think: Christians value t&p, nonbelievers don’t.

What Thunström and Noy did was to recruit 436 residents of North Carolina, the state hit hardest last year by Hurricane Florence. Those who were not affected by the hurricane (about 70% of the sample) had experienced another “hardship”. They were then given a standard sum of money (not specified) for participating in a Qualtrics survey, and an additional $5 to be used in the t&p experiment. Among the 436 participants, some were self-identified as Christian, while another group, either denying or unsure of God’s existence, were deemed “atheist/agnostic”. (The numbers in each group weren’t specified.)

The experiment also included people offering thoughts and prayers: people who were recruited to actually give them to those who were afflicted. These people included Christians, the nonreligious, and one priest who was “recruited from the first author’s local community.” Each offerer received a note detailing the travails of an afflicted person, and instructing them to offer either a thought or a prayer (it’s not clear whether the names of the afflicted were included in the note, but of course God would know).

To value the thoughts and prayers, the afflicted were offered two alternatives, among which a computer decided: an intercessory gesture that they’d pay for, or the absence of a gesture that they’d pay for. Payments could be positive (you’d have to actually give money), or negative (you’d pay to not have the gesture). The amount you’d pay varied, says the paper, between $0 and $5—the amount given for participating in the study, and subjects stated this “willingness to pay (WTP) before the computer made the choice.

The experiment isn’t described very well, and there’s no supplementary information, but I’ve taken some other details from second-hand reports of the studies, with the reporters apparently having talked to the authors. At any rate, here are the results, indicated in how much money people would give up for t&p, including both Christians (dark bars) and atheists/agnostics (light bars). Since atheists/agnostics wouldn’t be praying, the only alternative people were offered to receive that group were “thoughts”.

Christians would always give up an amount of money significantly greater than zero for both thoughts and prayers, except when the thinker was a nonreligious stranger, to whom they’d pay $1.52 not to receive thoughts (dark bar below zero). Since the authors are social scientists, they use a significance level of 0.1 (“hard scientists” use at most 0.05, and the latter is significantly different from zero using the more lax criterion but not the one that scientist would use).

In contrast, atheists/agnostics don’t give a rat’s patootie about t&p. In fact, they’d pay money to have priests or Christians not offer them thoughts and prayers, as you can see from the three light bars to the left, which are all below zero. What surprised me is that the nonbelievers would pay more to avoid prayers from a Christian stranger than from a priest ($3.54 versus $1.66 respectively), while they’d pay an intermediate amount ($2.02) to avoid getting thoughts from a religious stranger (these are all significantly different from zero). Finally, as you’d expect, nonbelievers don’t give a fig for thoughts from other nonbelievers, as we’re not superstitious. These nonbelievers would pay 33¢ to get thoughts from nonbelieving strangers.

There’s another part of the experiment in which participants were asked to give their level of agreement or disagreement to the statement, “I may sometimes be more helped by others’ prayer for me than their material help.” This “expected benefits index” (EBI) explains a great deal of the variation in the amount of money people were willing to pay for prayers and thoughts (or not pay for prayers and thoughts).

In general, I saw the study as weak, and afflicted by a failure to fully describe the methods as well as the use of an inflated level of statistical significance (0.1).  All that it really confirms is that Christians think that thoughts and prayers really work; i.e., that they believe in the supernatural. But we knew that already. I am in fact surprised that this study was published in PNAS, which is regarded as a pretty good scientific journal. 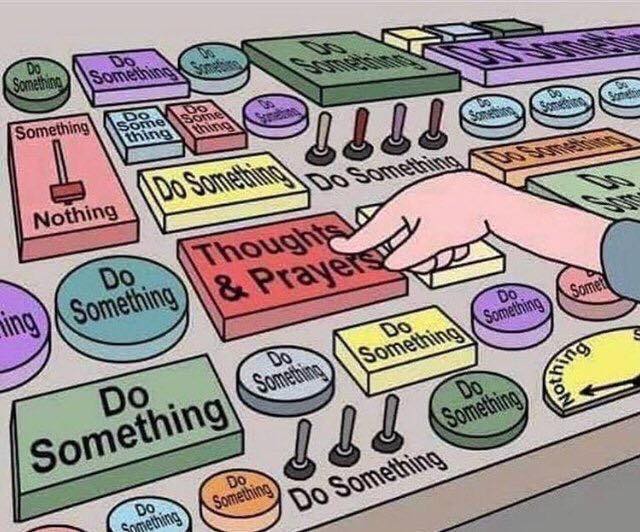 64 thoughts on “Thoughts and prayers: what are they worth?”