Although I have a few more batches of wildlife photos to post, I’m running low, and may have to put up photos more sporadically. If you have good photos to send, by all means submit them.

Today we have some diverse photos by regular Mark Sturtevant, whose flickr photo site is here. Mark’s notes are indented.

Here are some photos from about a year ago. Enjoy!

The first picture features a male Phalangid (aka ‘harvest-person’), possibly belonging to the genus Leiobunum. A feature of males is their rather elaborate pedipalps that are used in a precise way to hold on to females during mating. I have pictures of that to show later. 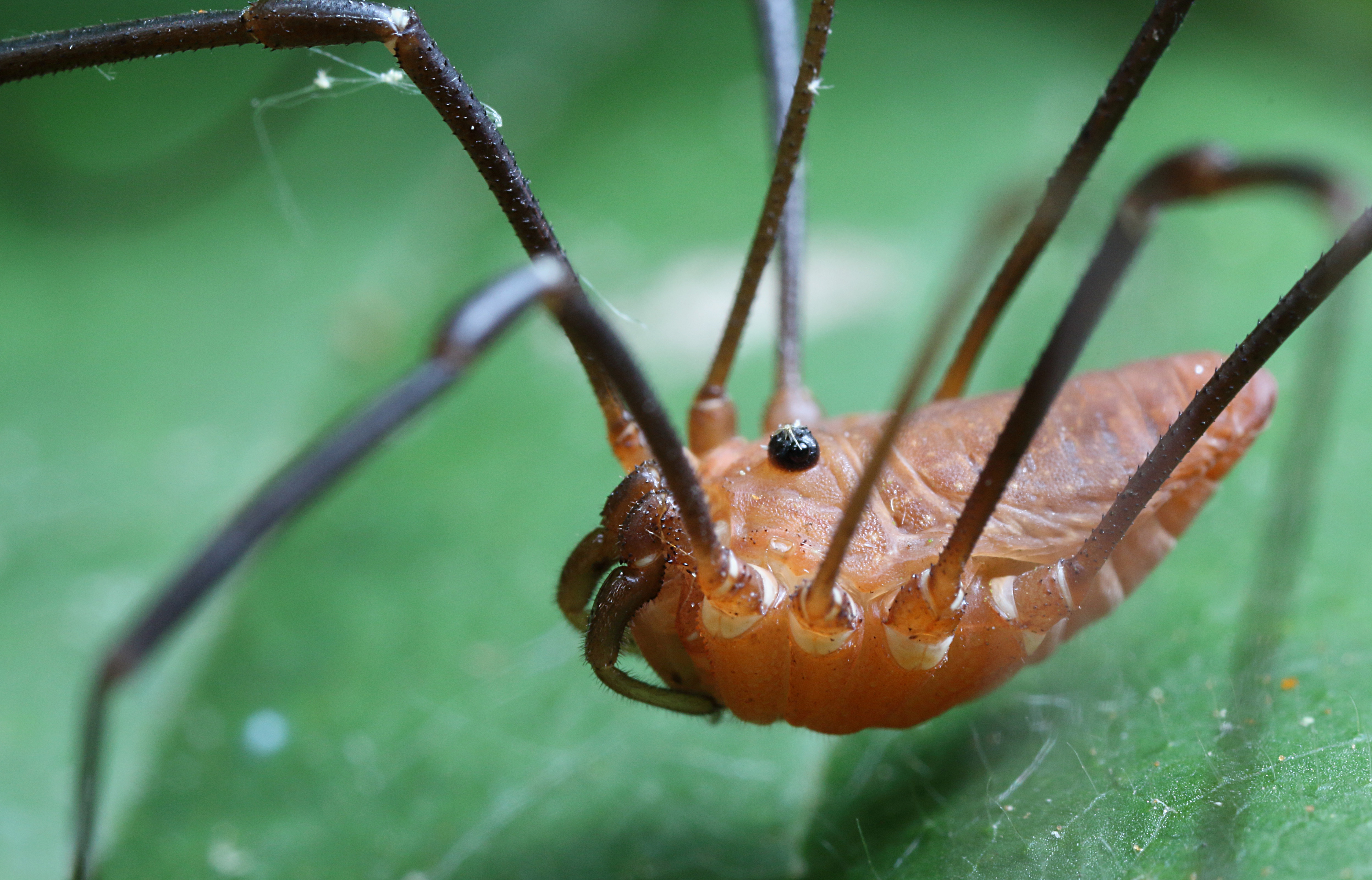 Next are several ‘candy-striped’ leafhoppers (Graphocephala coccinea) that were in my back yard. People are sometimes surprised when seeing pictures of them, but actually these diminutive insects are quite common. Most are red and blue, but some are red and green. 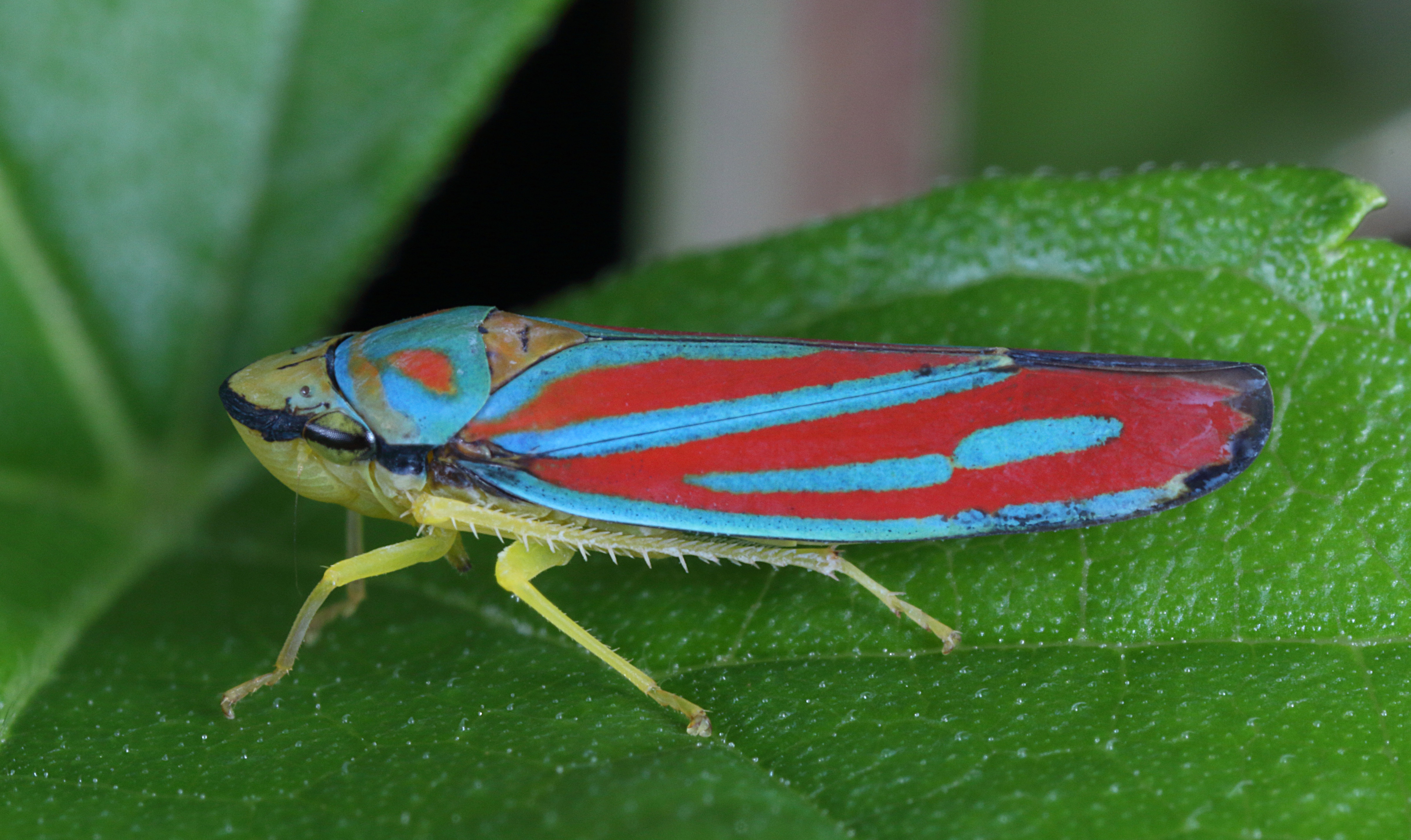 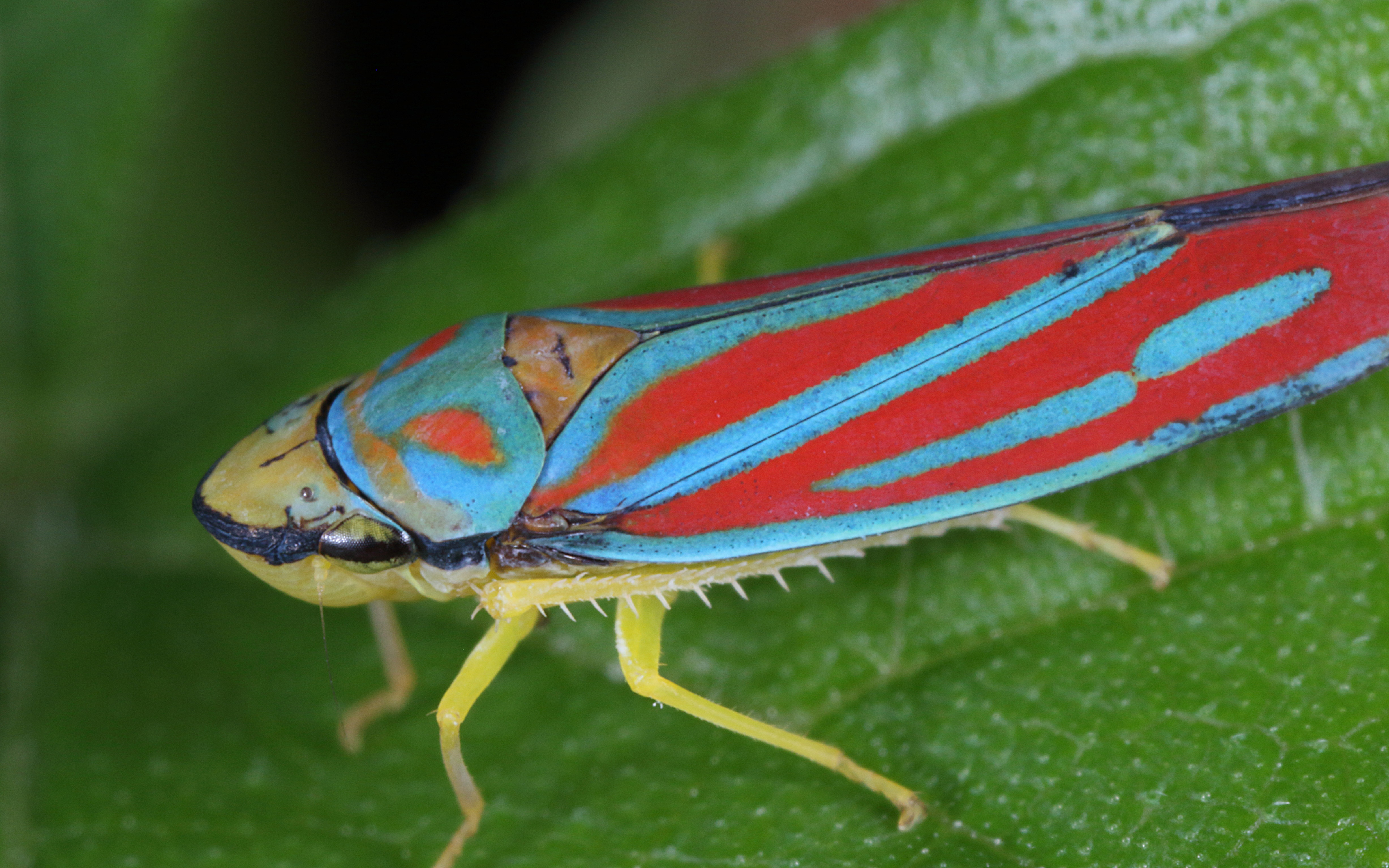 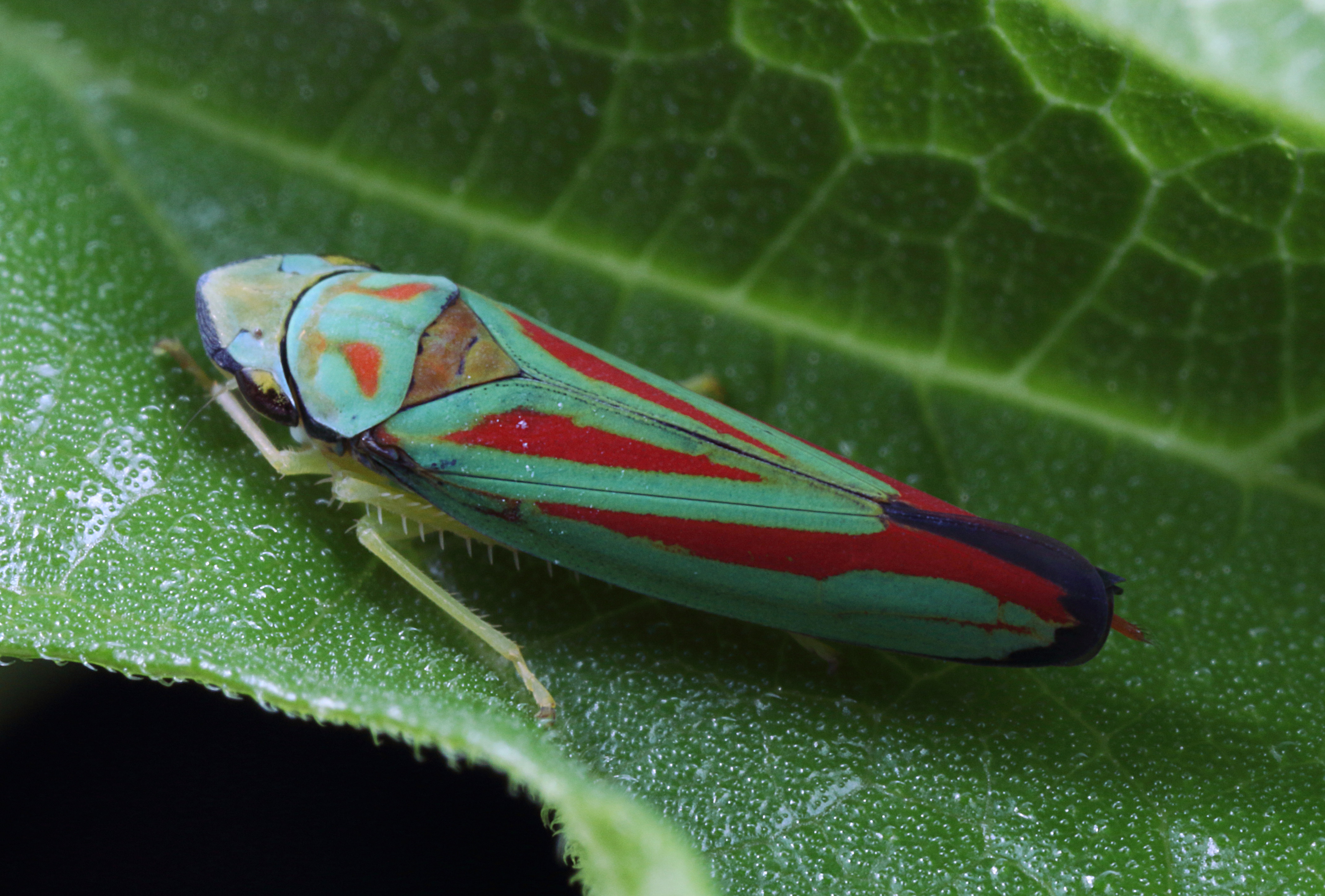 The butterfly in the next two pictures is the red-spotted purple (Limenitis arthemis). This one was missing most of one of its wings, so I had fun digitally replacing it with the ‘good’ wing. Hard to tell which one it is now.

I had long been curious about these tall, thistle-like weeds that are also shown, so I showed them to my Botanist-wife and she told me the plant is called teasel. This is an invasive species, and now I see it everywhere. I feel conflicted about that since it is interesting in its own right while also being a magnet for insects. 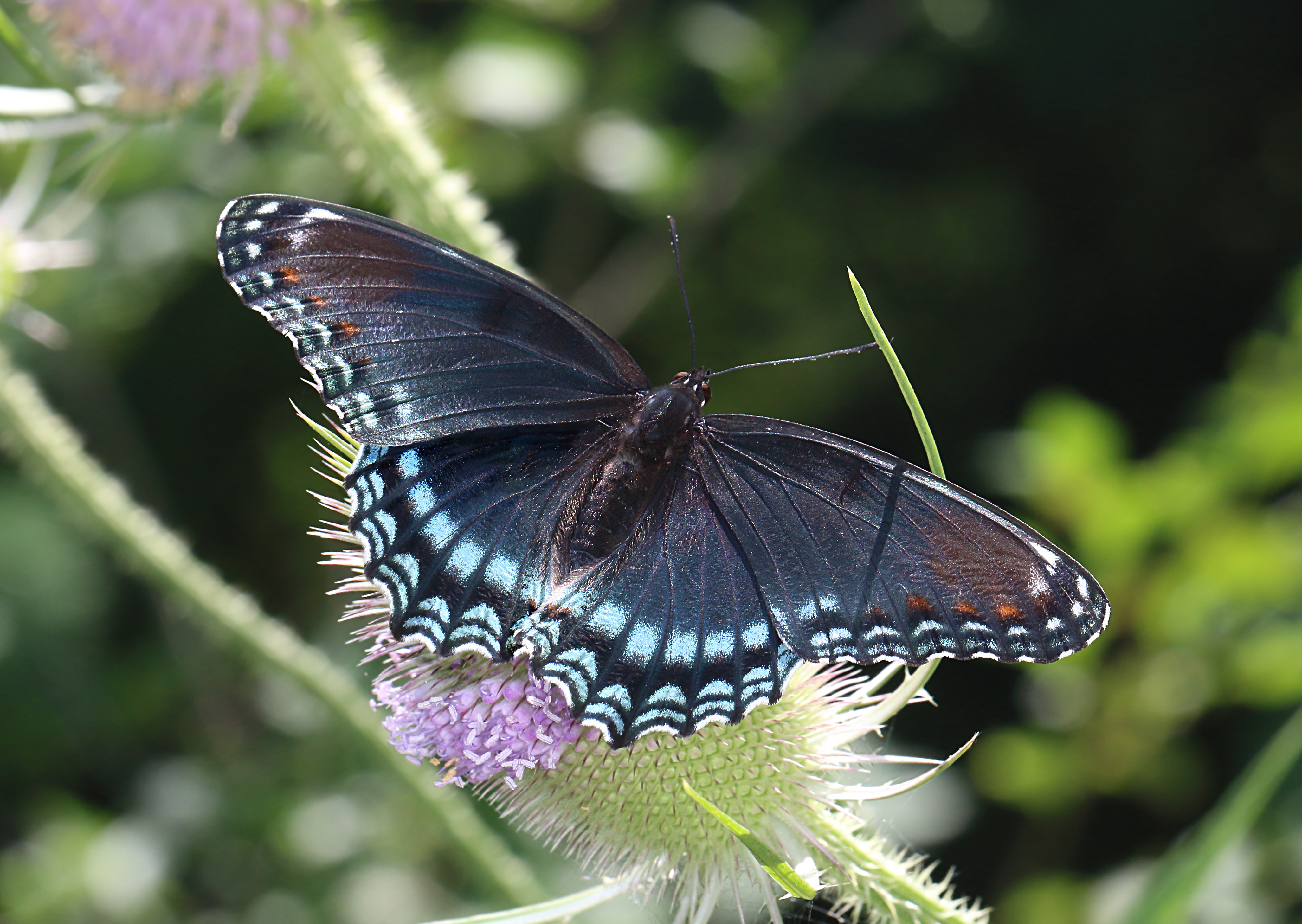 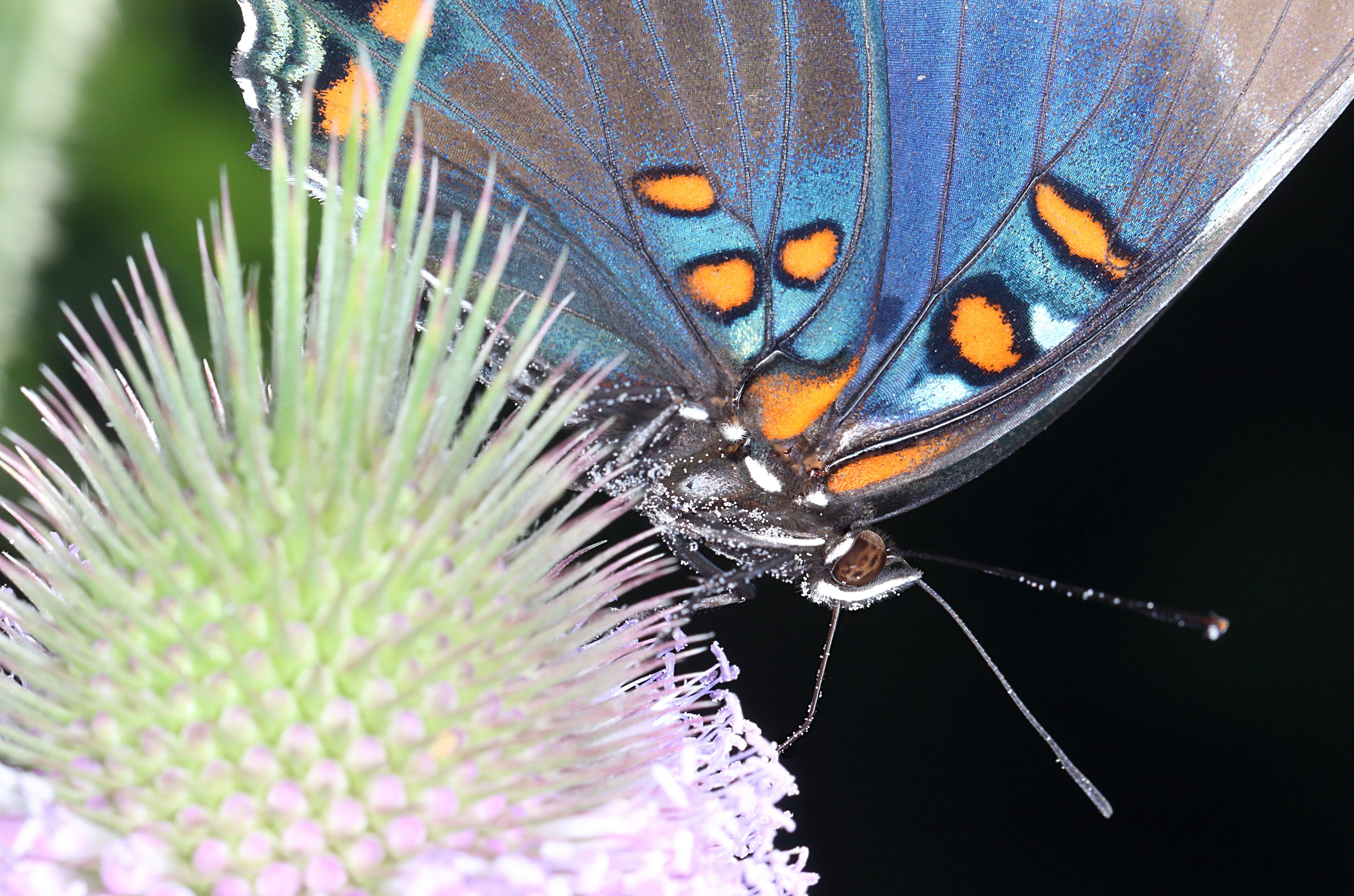 At the shore of a lake I came across a giant swallowtail butterfly (Papilio cresphontes) that was ‘puddling’ on the wet sand to get nutrients like salt and amino acids. This was a nice surprise since these very large butterflies (the largest in North America) seem to always be flying non-stop. ALL of my other pictures of them are rather blurry as I have never quite figured out how to freeze motion with shutter speed and/or flash. 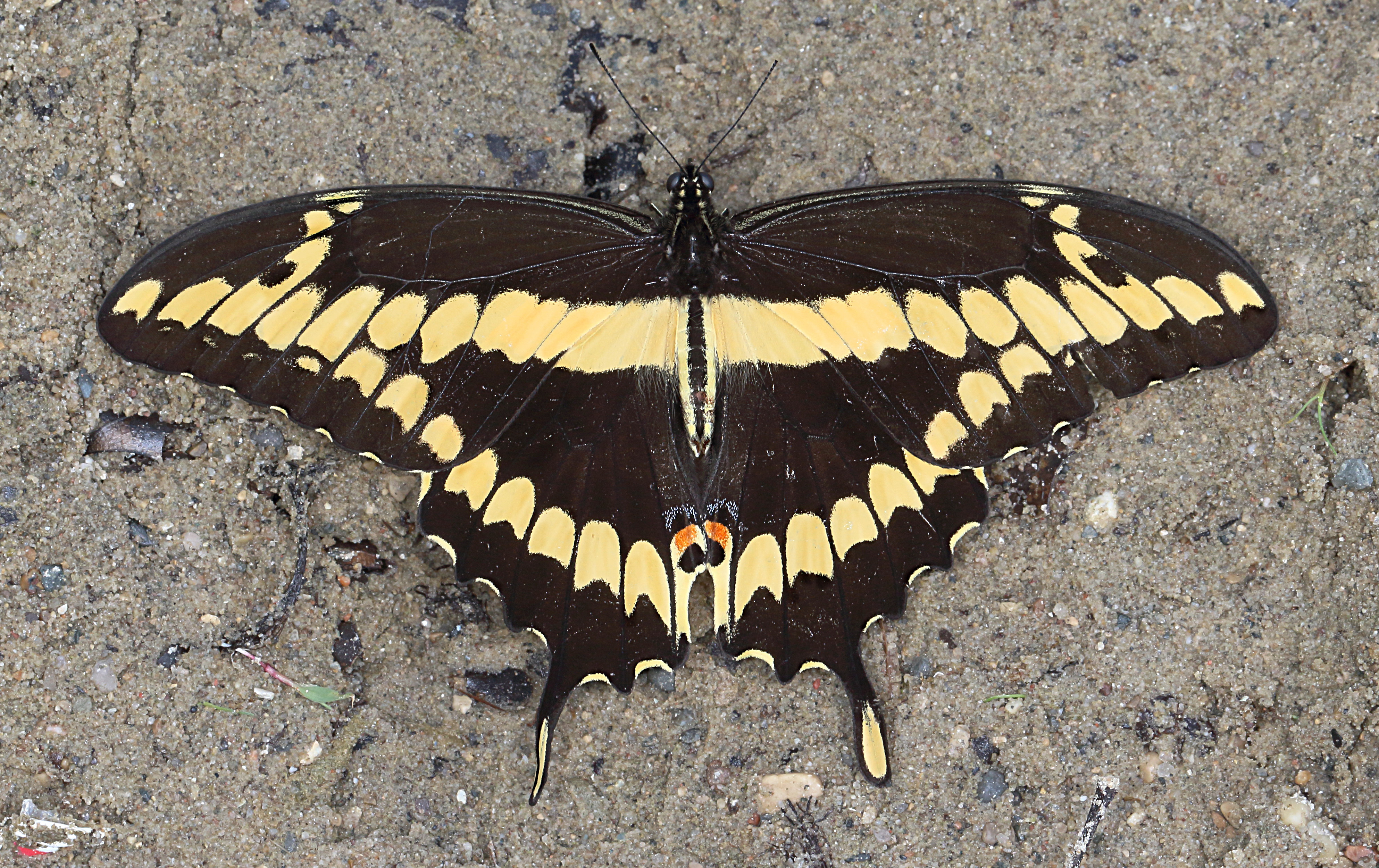 Next is an odd little moth that I always called an ‘airplane moth’. But the internet does not seem to recognize that name and there it is a plume moth. It looks to be the grape plume moth, Geina periscelidactylus. 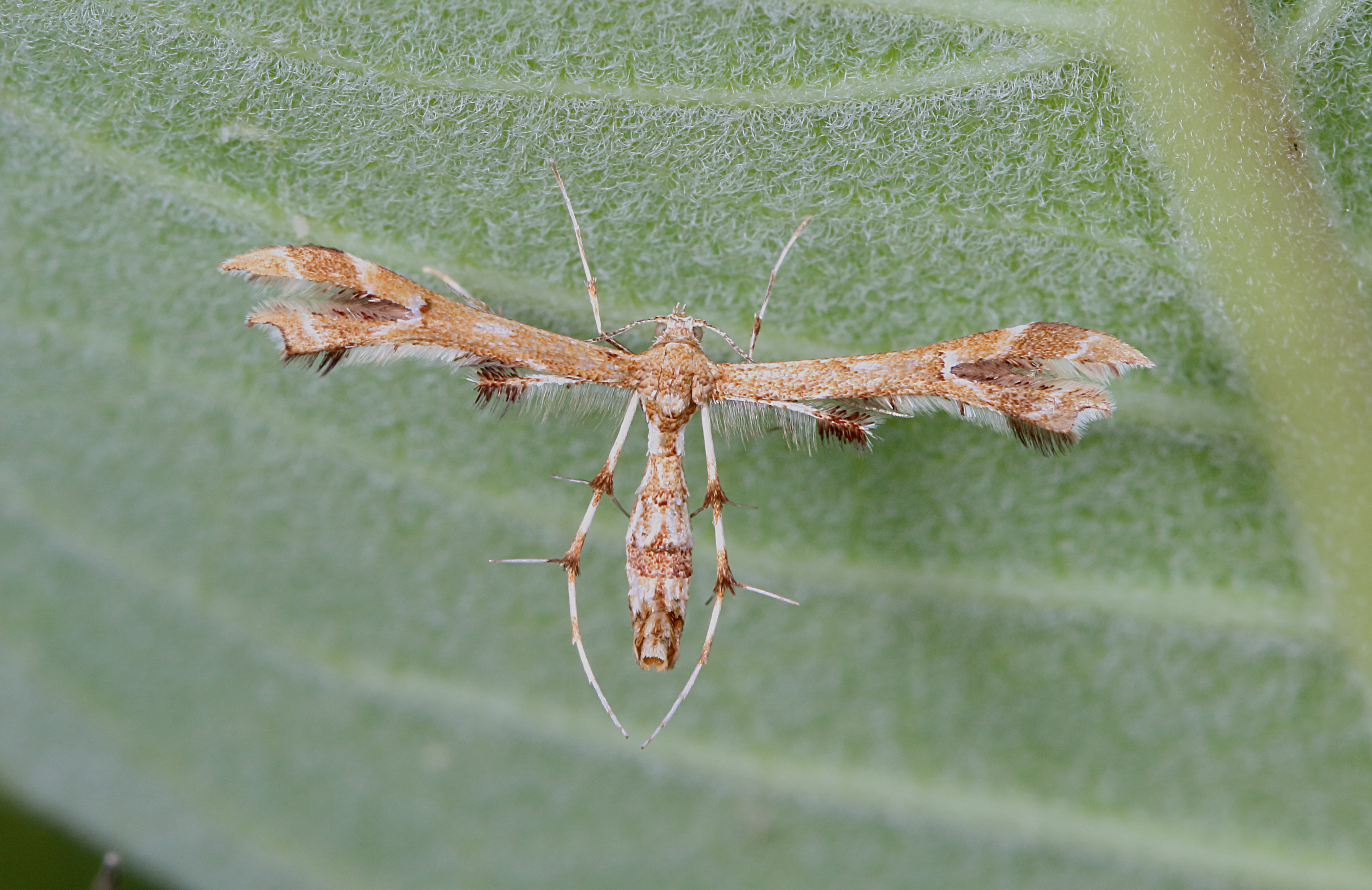 We seem to be having a ‘run’ on Lepidopterans. The lovely Saturniid moth in the next picture is the tulip-tree silkmoth (Callosamia angulifera). I do recommend that readers double click on this, for she is spectacular. Tulip tree silk moth larvae are almost exclusively found on tulip trees.

The story here is that I had come across a dead and leafless tree that someone had dumped in a local park (no idea why), and it had several pendulous cocoons on it. Most were empty, but two were still occupied. These were brought home to see what might emerge. The first that emerged revealed the identity of the mystery cocoons, but the moth had badly deformed wings. Fortunately, the second was this perfect female! Before she was completely hardened and so unlikely to fly, I managed to get this picture by hanging her in the opening of our garage. From there I could sit back in a chair, with the camera on a tripod, and poke her (gently) with a thin stick to get her to raise her wings before I snapped a picture. She was of course released that evening. 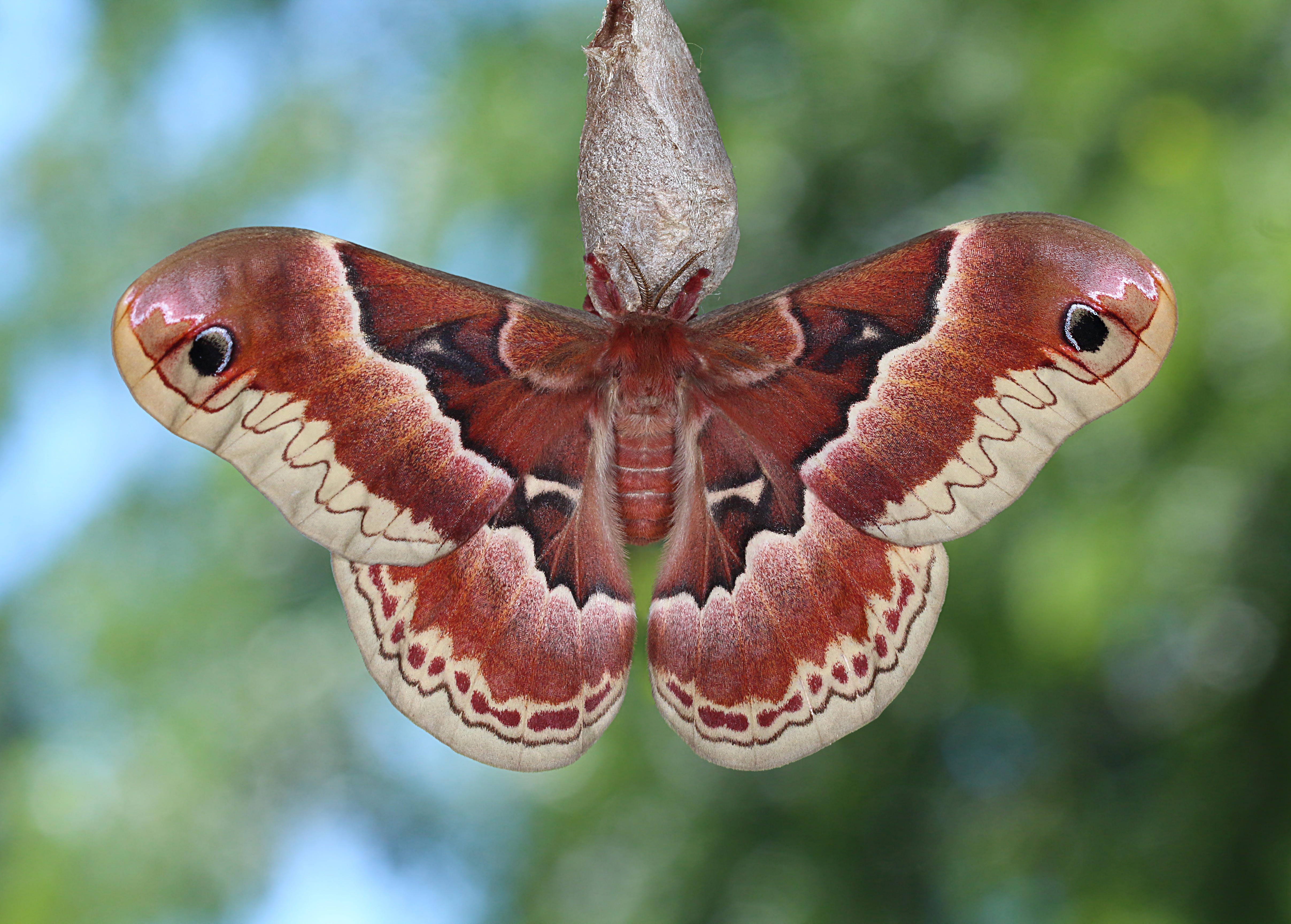 Next are some lace bugs, and the reason for their name is obvious with the winged adult. Different species of these plant-sucking insects are found to favor different host plants. I can get a couple pg different species when sweeping with a net, but without host plant information it would be difficult to identify them to species. Not so for this one, which is found on the leaves of linden trees. This is the ‘linden lacebug’ (Gargaphia tiliae). 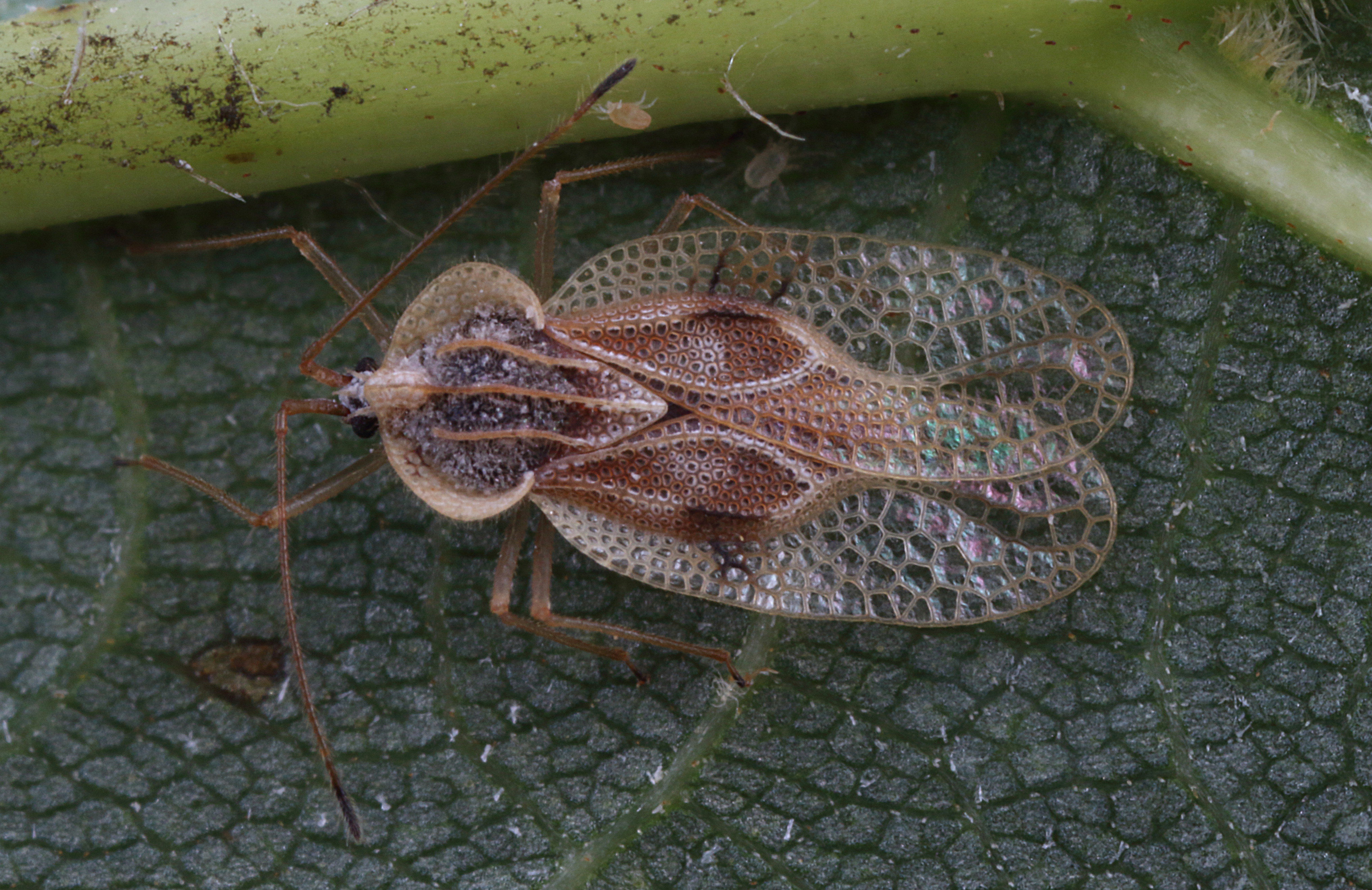 In the final picture we have a very young gray tree frog, Hyla versicolor. Youngsters are green, and many are gray when mature. This little cutie would barely cover a nickel. 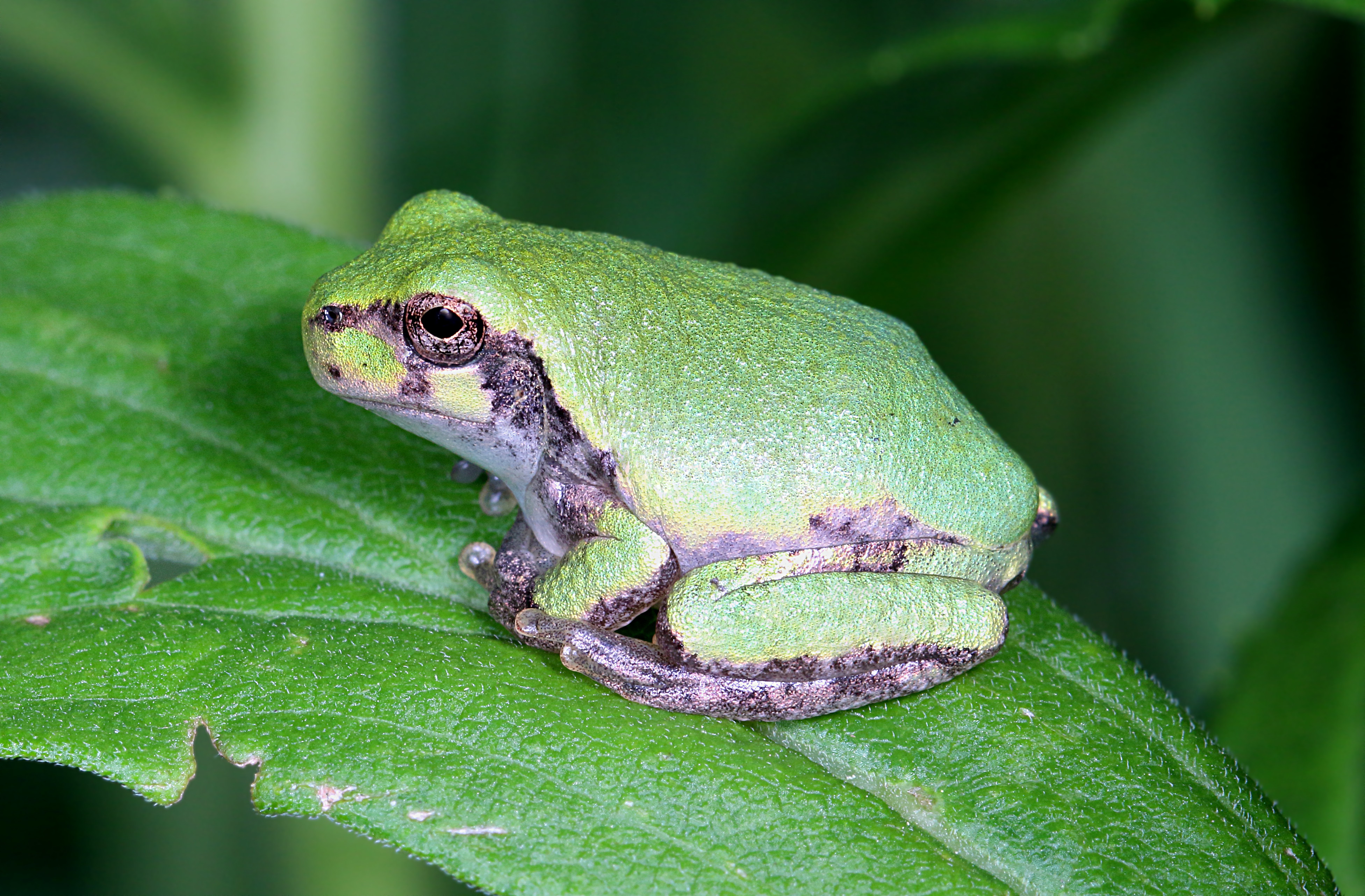