We already know that Israel-haters have accused the country of “pinkwashing”: being a gay-friendly nation and giving full rights to LGBTQ people only to burnish its image so it can distract world attention from its oppression of Palestinians. People who make this accusation, however, never manage to add that the Palestinian Territories, along with some other Arab nations, are definitely not gay-friendly, and you can be killed simply for being gay in Palestine. Those who go after Israel for publicizing its treatment of gays better check for beams in their own eyes.

However, the pinkwashing trope pales before this accusation on the Mondoweiss site, which is unbelievable (click on the screenshot). At first I thought it was a joke, but no, Monodoweiss is an established site (the Washington Post call it a “hate site”) that’s deeply anti-Israel in content. Well, they can write about what they want, but isn’t “Vegan-washing” a bit trivial? Apparently not: read and weep (or laugh)P 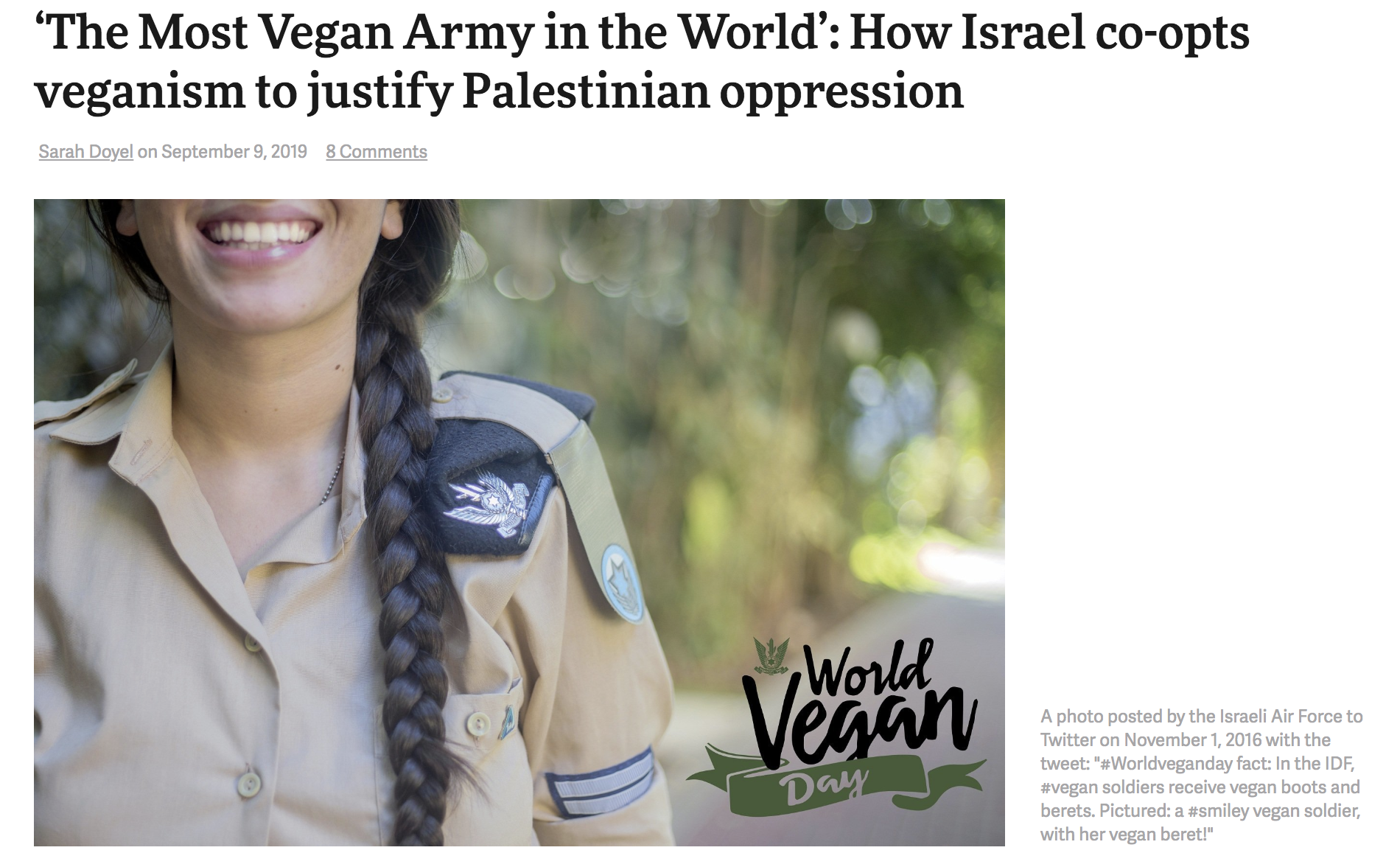 The IDF, which caters to vegans, comes in for particular disapprobation, as how can you not want to kill animals but want to kill Palestinians? (That’s the assumption of why people join the IDF.) Doesn’t that make Palestinians lower than animals?

If you’re vegan, Israel looks like paradise. At least, that’s what Vibe Israel and its partners at the Israel Brand Alliance want you to think. Their Vibe Vegan tour for food bloggers is just one small element of Israel’s government-sponsored veganwashing campaign, which aims to replace reports of its vicious human rights abuses with the peace-loving compassion usually associated with veganism and thereby repair its image on the global stage. Make no mistake: Israel is using veganism as a calculated facade to justify its military’s program of terror, gloss over its occupation of Palestine, and appropriate regional culture and traditions that predate Israel by hundreds if not thousands of years.

Far from being a politically neutral “lifestyle,” true veganism is a radical anti-oppression philosophy, and yet one of the most oppressive governments in the world is co-opting veganism for its own gains.

Veganism is at its core a political position, despite the fact that many people who identify as vegan see it as a set of consumer choices. My favorite definition of veganism is “an ideological framework that seeks to abolish the commodity status of animals and that advocates for animal liberation.” Regardless of one’s individual motivations for adopting veganism, the choice is inextricable from a commitment to minimize harm to living beings. You would be forgiven for thinking, then, that all people who claim to be vegans are staunch supporters of human rights. After all, a person who is committed to animal liberation would also be committed to human liberation. Right?

Put simply, veganwashing is the act of using veganism to create positive image associations or appear more compassionate than one actually is. A classic example is Ben & Jerry’s line of non-dairy ice creams, which they use to brand the company as vegan-friendly without ever actually decreasing their contribution to animal exploitation. Veganwashing appeals to an ethos of nonviolence and so is an especially useful strategy for actors who have a vested interest in concealing ongoing acts of violence, such as, say, a colonial government.

The issue here, as reader Orli (a psychologist) suggested, is “projection”. How do they (or we) really know that Israel is veganwashing and pinkwashing just to distract attention from its perfidies? What about an alternative: that Israel, by touting gay-friendly policies and veganism (the IDF, for instance, hands out leather-free combat boots and wool-free berets to vegan soldiers), is trying to make the country more attractive to prospective settlers?

I don’t know the answer, but author Sarah Doyel pretends that she does:

Not one to be behind the times, Israel’s veganwashing campaign has focused heavily on attracting the millennials scrolling through these influencers’ pages and sites. Non-profit organization Vibe Israel invited prominent vegan bloggers and YouTubers on what amounted to an all-expenses-paid veganwashing vacation to learn about Israeli vegan culture. Vibe Israel’s stated mission is to enhance Israel’s global reputation, and the organization even states prominently on their website’s homepage that it is “harnessing the power of social media and country branding strategies” to convince the world that Israel is a hip and happening place. Birthright Israel, a government program that offers free trips to Israel for Jews around the world ages 18-26 while completely ignoring the fact that most Palestinians can’t go home, now has a vegan option for teens and twenty-somethings who want a “cruelty-free” experience in occupied territory.

Watching the video of the Vibe Vegan tour, there is no way that you would have any idea that brutal human rights violations are happening just kilometers away from the joyful shots of cooking classes and fresh produce. Which is, of course, the point.

The article hits all the Offense Culture buttons by also making the misguided assertion the Cultural Appropriation is happening. To wit:

The final piece of Israel’s veganwashing campaign relies on the appropriation of Palestinian cuisine and the simultaneous erasure of plant-based tradition in Palestinian culinary history. Both the Israeli government and Israeli vegans themselves frequently lay claim to Palestinian foods that have been around for hundreds of years and repackage them as “Israeli cuisine,” regardless of the fact that the country of Israel has only existed since 1948. Israeli chefs tout naturally plant-based dishes such as falafel, hummus, tabbouleh, and baba ghanoush as evidence that Israeli food is especially vegan-friendly. What they fail to mention is that each of these dishes are actually Palestinian and Levantine plates that predate Israel’s presence in the region by centuries.

Restaurants in my current home of Washington, DC engage in this kind of cultural appropriation all the time, which might be slightly less disturbing to me if they weren’t so successful as a result.

Doyel doesn’t consider that this cuisine is actually Middle Eastern cuisine, and Jews have lived there, and eaten it, for hundreds of years. Even if cultural appropriation were bad, which it almost never is, this isn’t even nearly cultural appropriation. The cuisine may predate 1948, but it doesn’t predate Jews in the area that is now Israel.

It’s sad when people hate Israel so much that they can’t even recognize when it does good stuff, like promoting veganism and being gay-friendly. They have to see these things as ways to distract from the supposed monstrous crimes of the Israelis. Again—mote, beam.

But this is a sign of the times. Just like there is simply no possibility to a Woke person that their opponents can have any positive traits, or do any positive things, so Israel can’t possibly do anything good. The inability to recognize ambiguity—that people or countries can do both good stuff and bad stuff—has made the world increasingly and unnecessarily polarized. (The statue of Thomas Jefferson at my own alma mater is now being defaced in the same misguided way.)

In the end, though, this is ridiculous: Doyel is engaged in embarrassing behavior, and her agenda is showing. What’s will be the next kind of “-washing” that Israel is accused of?

25 thoughts on ““Veganwashing” in Israel?”